Christmas is a magical time — from stores hanging up decorations, pop-up holiday markets and family gatherings to lots of holiday parties accompanied by lots of festive booze. It’s a time where everyone rises to the occasion of being festive, which is not hard to come by in a city that’s always in the holiday mood. On December 15 at the Bellco Theatre, Denver welcomed even more Christmas spirit with “John Legend: A Legendary Christmas Tour” and it left everyone in attendance merry and bright. 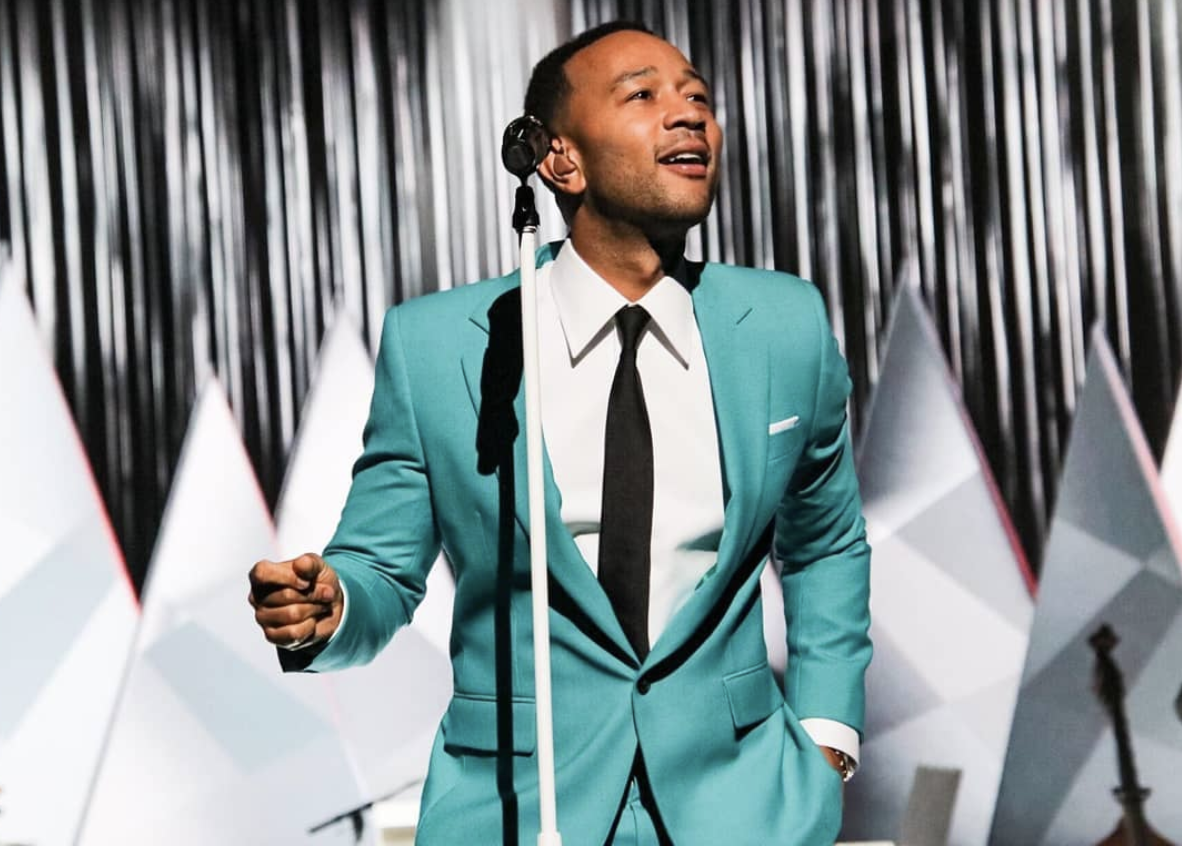 Legend came on at 8:15 p.m. to a nearly sold-out crowd. Attendees ranged from six-years-old to 80-years-old and were dressed to impress. There were floor-length gowns, sweater suits, Christmas tuxes and everything in between. Legend brought the Christmas tunes, but Denver brought the holiday spirit. He began the show with a black and white video playing on the screen of him singing “The Christmas Song.” It set the mood for the night but not the tone. Immediately after the video ended, the lights went up and Legend rushed on stage in a teal tux with his eight-man band behind and three female backup singers. He launched into “What Christmas Means to Me” asking everyone to get on their feet. It was a strong song to begin the night. Everyone was dancing, singing along and anticipating the night ahead.

Legend didn’t talk much throughout the show besides several “What’s up Denver?” and “How are we feeling tonight?” His most notable commentary was his explanation of the Christmas tour and his holiday memories as a child. “I made this Christmas album because I remember we’d gather at my grandma’s house,” Legend reminisced. “The most important part was the music…We’d gather around the piano and play music for hours.” He describes the songs they would sing as Motown and a jazz-era Christmas. This was the set of the tour. It looked like a cross between Soul Train and The Andy Williams Show. The clothes of the band were black tuxes and black Ray-Bans. The three backup singers had classic poodle skirts, colorful velvet jumpsuits, satin long dresses and more. Legend himself wore several different outfits throughout the night, from the teal suit to a maroon velvet tux. Even the stage props set the whole night up for a retro feel. One scene was “The Johnny Legend Show” while another was “JL’s Juke Box.”

The only awkward outliner of the night was Legend performing some of his original songs such as “A Good Night,” “Tonight (Best You Ever Had) and “Love Me Now” with the black and white music video playing on the screen in the backdrop. If you’re a fan of Legend, this was like attending his concert that disguised itself as a Christmas show. But overall, it was an awkward disconnect from the Christmas songs. 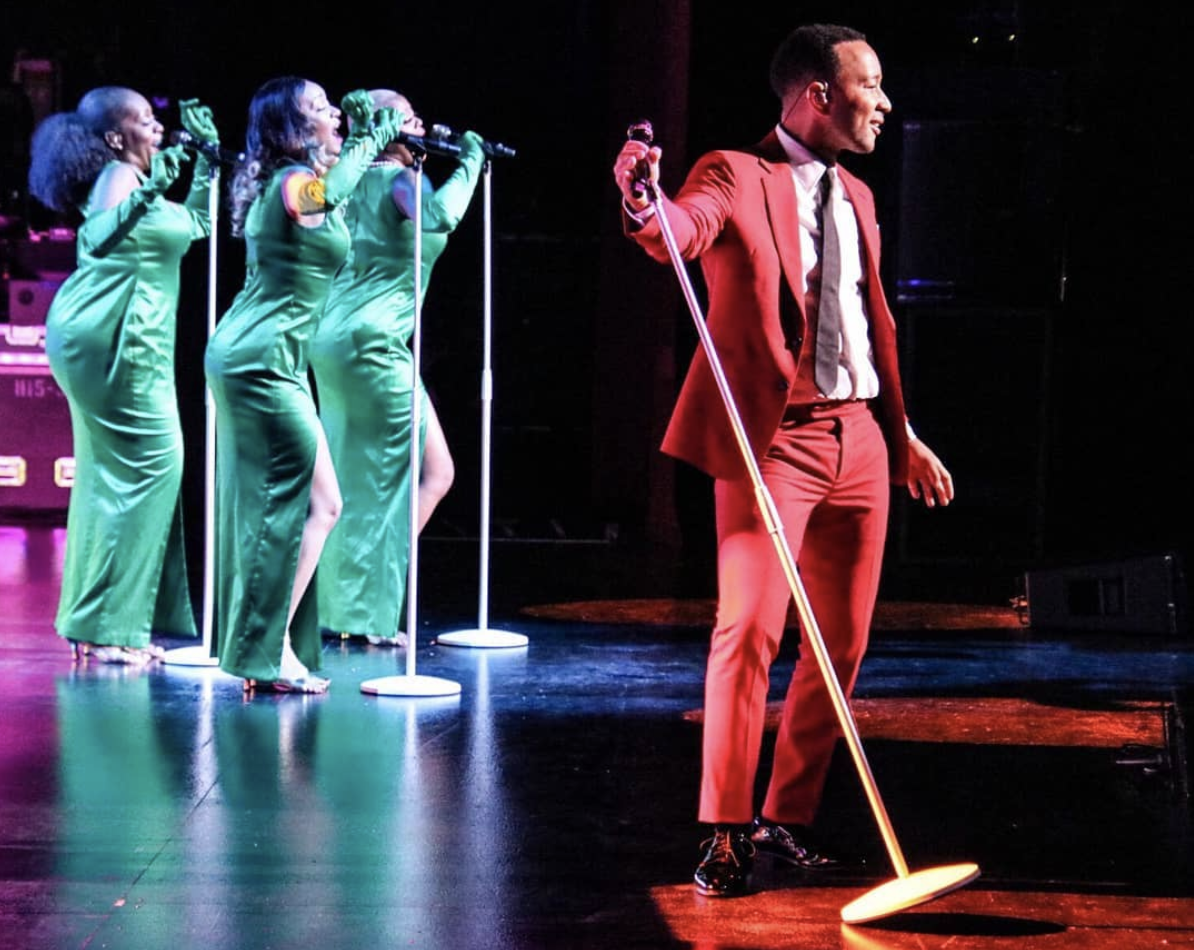 Over the course of the night, Legend sang other Christmas classics such as “Silver Bells,” “Have Yourself a Merry Little Christmas” and “Merry Christmas Baby.” He also sang new songs off his Christmas album, A Legendary Christmas. Some notable and fan favorites were “Bring Me Love,” “Wrap Me Up in Your Love” and “By Christmas Eve.” What stood out most about the show wasn’t just the outfit changes or the stage props or the mix of songs. What stood out what Legend’s voice. It was, dare I say, better than his recordings. Legend has true talent that exceeds expectation. His tone held strong throughout the night, never faltering or wavering. Legend’s songs aren’t known to be easy, vocal-range wise. Even Christmas songs that can be sung by anyone and everyone, Legend took and added higher chords and held longer notes. He switched from dancing on stage, moving from left and right, to staying stationary at his iconic piano.

Throughout the night, Legend had everyone singing and dancing. Even the Grinches and Scrooges of the crowd (if any) were on their feet. From his original songs to Christmas classics, Denver was in the holiday spirit.  After all, the best way to spread Christmas is singing loud for all to hear.