How Adopting an Animal Can Change Your Life

On September 21, 2016, Theo Gagen and her boyfriend, Alex Lightman, welcomed a new member into their family. A new season marked a new chapter in their lives. “It wasn’t super planned, and I recommend that people plan it out a little more than we did,” Gagen said. “But it turned out okay, and we’re super happy with our decision.”

According to the American Society for the Prevention of Cruelty to Animals, approximately 6.5 million animals enter US animal shelters nationwide every year but only 3.2 million are adopted.

“There are many dogs in shelters that need to be rescued than there are people willing to adopt them,” said Joanna Lambert, a professor in biological anthropology at the University of Colorado at Boulder who conducts research on animal behavior. She said shelters around the country are put into a dilemma where they have to weigh the consequences of maintaining the dogs they have versus bringing in new dogs.

Gagen and Lightman visited the Boulder Humane Society to look around immediately after they decided to adopt a dog. Before walking through the doors, Gagen told Lightman she wanted a small, old dog nobody else would adopt to makes its last years of life memorable. They ended up adopting King — a 7-year-old, 85-pound German Shepherd, pit bull and chow chow mix full of energy and life. 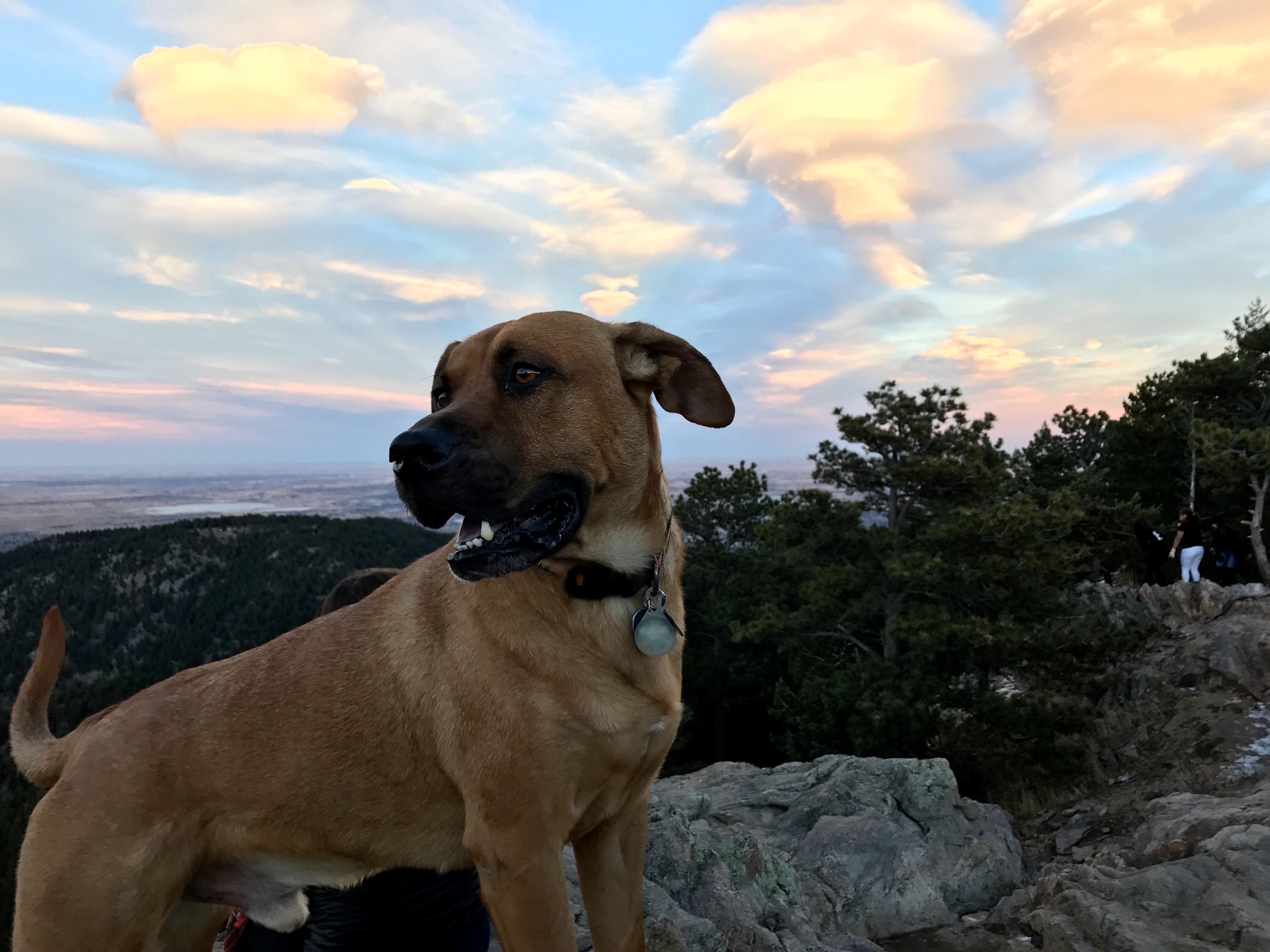 King the first month of having him.

“King had his tongue hanging three feet out of his mouth and he was jumping up on the kennel,” Gagen said. “Alex was like, ‘I want to play with this one — I want to play with this one!’” The two put King on hold as soon as they were finished playing with him. Gagen then explained to Lightman they shouldn’t get King without talking to his parents and roommates — she wanted to have a night to think about the details before making a big decision.

“Alex just couldn’t wait, so we went back two hours later and got him,” Gagen said.

The adoption process was a bit different for Charlène von Saher of New York City and her 11-year-old pit bull, Lola. Von Saher didn’t immediately know Lola was the one — she only knew about her story because of a Facebook video. “I sent an application to Angels for Mistreated Animals after seeing Lola’s video on Facebook,” von Saher said. “They told me that there were about 350 applications for Lola, but they thought she would do well with me. I told them to give her to someone else because I truly wanted to adopt a dog that no one wanted.”

She ended up driving to Brooklyn, New York, on March 18, 2017, to officially adopt Lola.

Adopting an animal can have immense impacts on people’s lives in numerous ways. King inspired Gagen to go vegan and work for the Humane Society of Boulder Valley as a developmental intern for a semester of school. She no longer interns there but still donates dog food and toys throughout the year, especially during the holidays. King has changed the way she lives. “He makes me so grateful to have animals in my life. He makes me want to start a sanctuary one day — not just for dogs but for a bunch of different animals that are in need,” Gagen said. “He has taught me how to be a mom. Being King’s person is the best experience I’ve had in my entire life.” 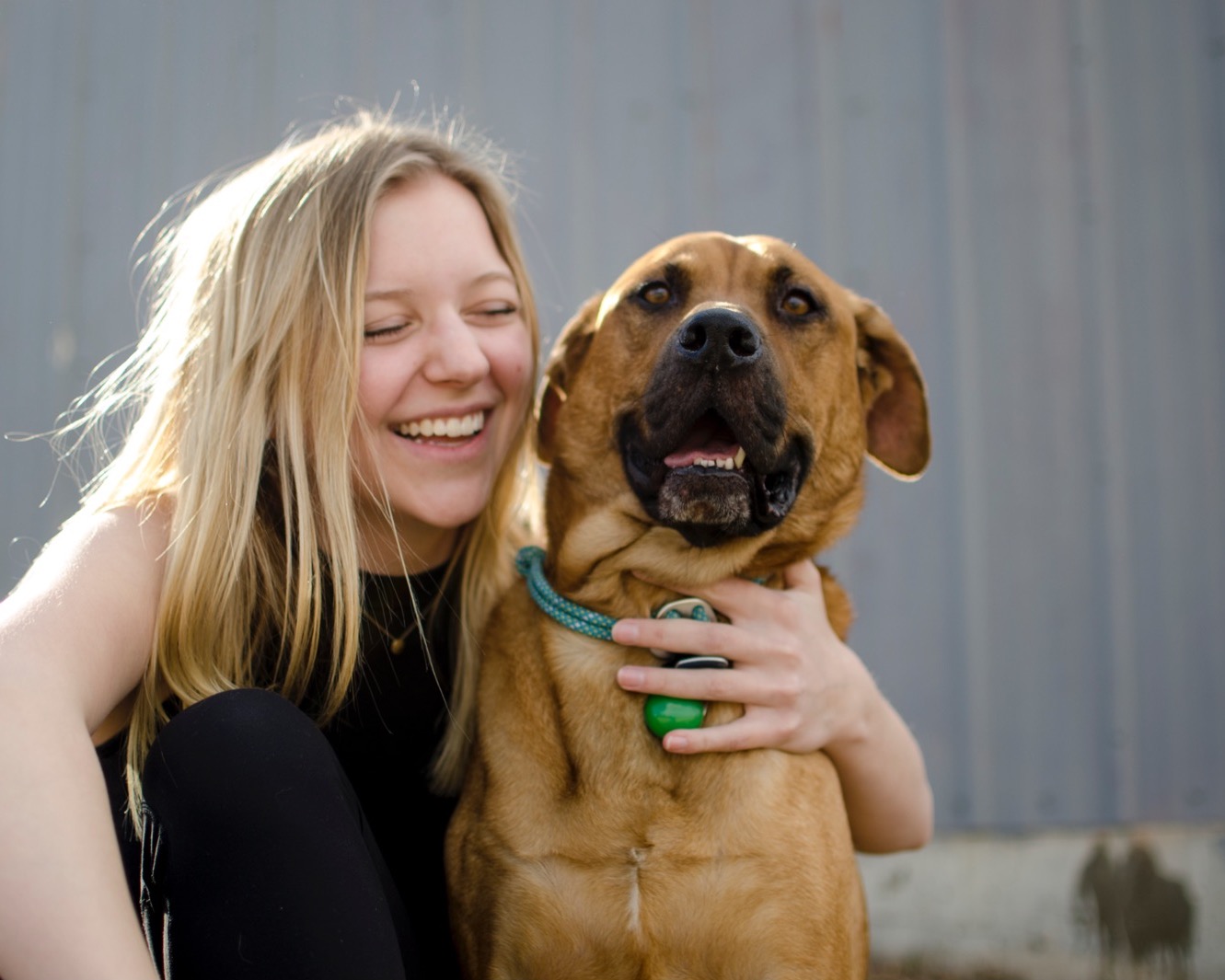 Lola has pushed von Saher to spread more awareness about how spectacular rescue animals can be. She realized how beneficial social media is for homeless animals after adopting Lola. Her Instagram for Lola has about 19,500 followers. Von Saher feels like she and Lola are walking ambassadors for rescue dogs and pit bulls. There isn’t a day that goes by she doesn’t stop to talk to someone on the street about adopting and its benefits. “Lola’s like my child — I spoil her rotten and love doing it,” von Saher said. “My world and schedule rotates around her. She makes me so happy just being near her and makes me laugh constantly.” Von Saher had a dachshund named Sebastian she was completely devoted to before adopting Lola. Lola helped her heal after Sebastian passed away.

Lightman has diagnosed anxiety, so his psychiatrist recommended that he should get a service animal. King was the perfect fit. Gagen and Lightman have been together for nearly three years and dealing with Lightman’s anxiety has been a learning experience for all of them, including King. “King can sense what either of us are feeling at any given moment in time, and he’s just so good at sensing that,” Gagen said. “If Alex is on the couch really stressed out or is having a mental breakdown, King will stop anything he’s doing, jump on the couch, will try to sit on Alex’s lap — will make Alex laugh. He’ll just do anything to make him feel better.”

However, there are compromises and sacrifices people have to make when adopting an animal. Lightman and Gagen had to make changes in their lives when dealing with King’s separation anxiety. “We can’t always bring him everywhere. We try to coordinate our school schedules and work schedules so that one of us can be home most of the time,” Gagen said. “But obviously it’s not realistic to always be home. We want to go do things together and still live our lives even though he’s part of it.”

Gagen and Lightman lived in a small apartment when they first adopted King, so he paced around the apartment frequently. The two moved into a larger apartment with a backyard last year, and it eased his separation anxiety.

“We noticed that since getting a backyard and putting a doggy door in — so he can go in and out whenever he wants — has actually helped a lot,” Gagen said. “I think he has a fear of being locked in a space alone — the fear of being alone. Nobody coming back for him absolutely terrifies him.”

Lambert said separation anxiety could be susceptible to certain breeds of dogs through genetics and also victims of abuse. Lambert has also adopted three dogs with extreme separation anxiety. Firefly, one of Lambert’s rescue dogs with separation anxiety, had to be with her at all times for the first two years of having her — she brought her into lectures and still has a dog bed under her desk. “Dogs that have been abused and left in really, really small cages — or even more — left on a chain in the backyard with no recourse are more susceptible,” Lambert said. “They’re not able to get out. They’re stuck.”

An animal’s past ultimately shapes its personality, but it can be dealt with over time. “Many dogs that are going into shelters are relinquished because of behavioral problems — not necessarily on the part of the dog but on the part of the human,” Lambert said. “So the dog ends up not being properly socialized.”

King loves socializing with other dogs, but Gagen and Lightman can’t adopt a sibling for him since he’s already a handful. Instead, they bring him to dog parks where he can interact with different types of dogs and people. The dog park allows King to socialize with others, but it has also revealed parts of his past. Gagen believes King had an abusive past with an older man. “If he sees any man that’s over 40 years old, has gray hair, has any sort of a rasp in their voice and is holding a Chuckit! ball launcher — he goes ballistic,” Gagen said. 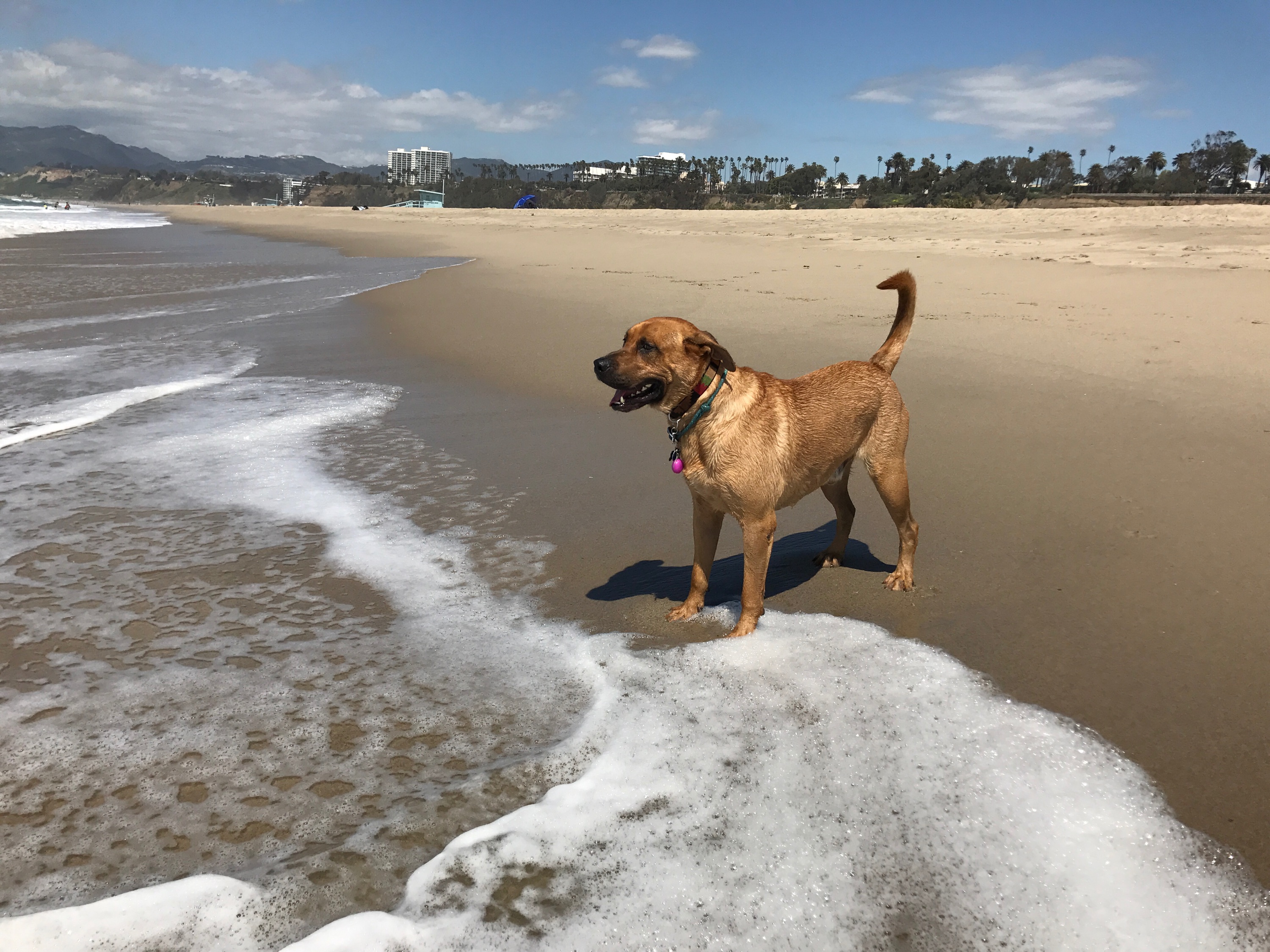 King by the beach.

Dogs tend to “generalize” any human who looks, sounds or acts similar to their former abuser, Lambert said. Both Gagen’s and Lightman’s fathers struggle bonding with King because of his fear of older men. “It’s just something we have to be careful about now, but we never really know how he’s going to react around older men,” Gagen said. “He’s usually fine after a while. He’s never bitten anybody. He’s never tried to hurt anybody — more than anything he’s scared.”

Lola, on the other hand, was chained up in a garage for eight years until someone rescued her. “She always follows the sun inside or outside — she needs to have sunshine on her at all times,” von Saher said. “I guess too many years chained up in a dirty garage will do that to you.” Von Saher had no idea how socialized Lola was since she was restricted in a garage most of her life. She had to hire multiple trainers for Lola because she wasn’t easy on her in the beginning. Over time, she realized all that Lola needed was love and patience.

Rescue animals can overcome an extraordinary amount — even if they were abused — when given the right amount of time, love and effort. “Everybody has their flaws. Being able to help that animal through their flaws — at the same time when they’re helping you with yours — is just such a great experience,” Gagen said.

Animals’ lives completely transform when they are adopted into a loving home, but people’s lives also transform when adopting an animal. Having a dog around that you can pet and talk to have been shown to increase human longevity and human quality of life — it reduces stress hormones and increases all the feel-good hormones, Lambert said. Lambert felt completely alone at one point in her life because she traveled frequently and couldn’t have a dog.

“It was like an emptiness in my life — when my life got a little bit more established — I started accumulating dogs as soon as I could,” Lambert said. “And my life is so much richer because of it. I could also say the most remarkable dogs I’ve gotten and had in my life have been rescue dogs.”