There’s a new kid dancing on the block. Last Saturday, Weird Touch protégées Peer Review hosted their second after-hours party further establishing themselves in the Denver music scene. Peer Review — a group that requested to remain anonymous and will be referred to individually as Didi, Gogo and Lucky — is a collaboration of three Denver transplants. Didi is from Mexico City, Lucky is from Chicago and Gogo from Seattle. 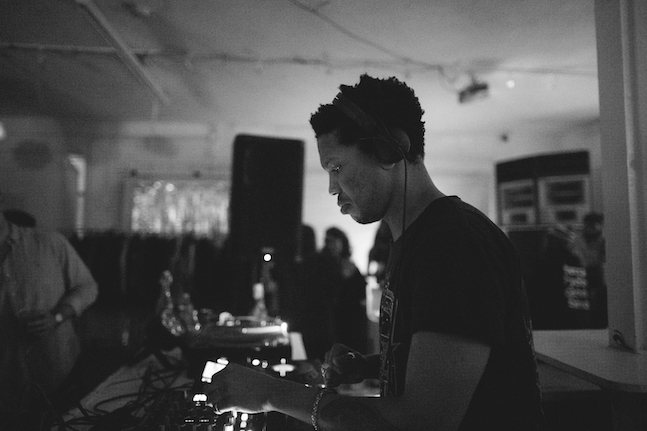 A Peer Review event is different from what most people think of as an after-hours party. There are no predatory muscle bros, nobody is falling over wasted (despite the open bar) and there is even enough musical variety to entertain relatively sober reporters. For Peer Review, cultivating a safe space is paramount. “This isn’t just about bare-minimum, four walls, a DJ, some booze and ‘let’s party,’” says Gogo, “it’s about creating community, safe spaces, bringing people together and creating a space where other people can link up and collaborate.”

Didi says that Peer Review was inspired by the music at parties around town but felt they could do more as far as aesthetic. For last Saturday’s party, the trio worked with Meow Wolf collaborator Hayley Dixon and video artist John Heenan to create an atmosphere that was at the same time retro and otherworldly. From the ceiling, Dixon hung clouds that glowed red. In the corner of the warehouse was a yellow orb floating in a nest of storm clouds like a tangible version of the cover of Yob’s “Clearing a Path to Ascend.” Across the dancefloor next to the bar, Heenan’s VJ booth was flanked by a wall of old television sets playing a predetermined loop of brightly colored videos while he projected on the walls kaleidoscopic fascinations live, changing according to the music. 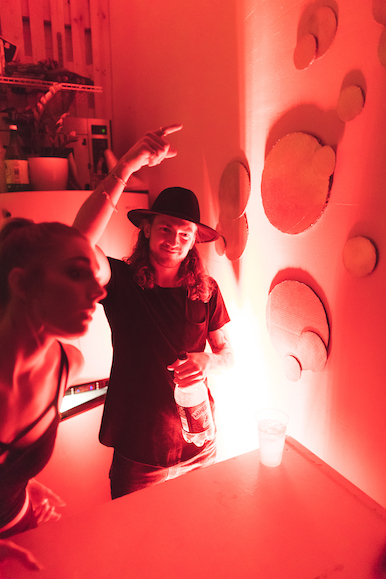 Peer Review’s crowd celebrates its diversity — some burn blunts, others palo santo. Lucky recalls talking to a hip-hop DJ who happened to be at the party and was surprised how much fun he had. “He ended up staying the whole time” remembers Lucky, smiling, “he was like, ‘tell me more about these events, ‘cuz I’m getting down!’”

Despite the cold weather and impending snow, people came out in droves to be a part of Peer Review’s second experimental event. Packed with baristas from hip cafes, musicians that regularly gig at The Lions Lair and that bald guy with glasses and a mustache who is at every art gallery opening — it was a whos-who of ‘isn’t that the guy from…’ 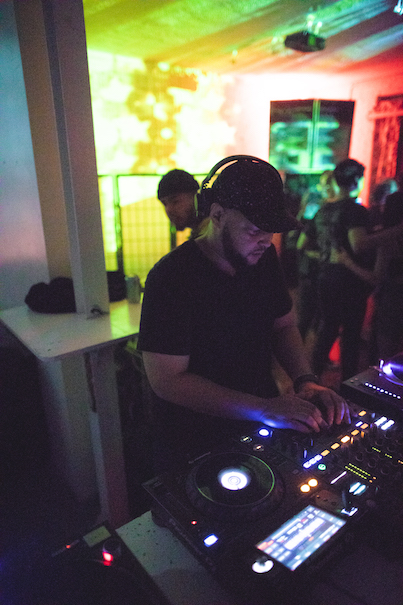 Photo courtesy of Esteban Tobon @estebvnPeer Review brought in-house legend DJ QU fresh off his Australian tour to headline. The combination of QU and Peer Review drew more than a little pull — shortly after doors opened at 11 p.m., the venue was already pushing capacity. DJ QU tantalized a captive crowd for four hours until the cops came in with a noise complaint around 4:30 a.m.

Next week, Peer Review is heading down to Mexico City to take part in a festival and conduct a little research for their next big event in Denver. The trio knows how to put together a night of fun for experienced ravers and newbies alike. If they continue on this trajectory, Peer Review events are not to be missed. You can follow them on Facebook and Instagram, but they tend to keep tight-lipped on social media. After packing two after-hours events on word of mouth alone, Peer Review’s attitude is ‘don’t find us, we’ll find you.’ Keep your ear to the ground, Denver and hope Peer Review finds you.

Editor’s Note: The author gained access this event and interviews because he is personal friends with the organizers.