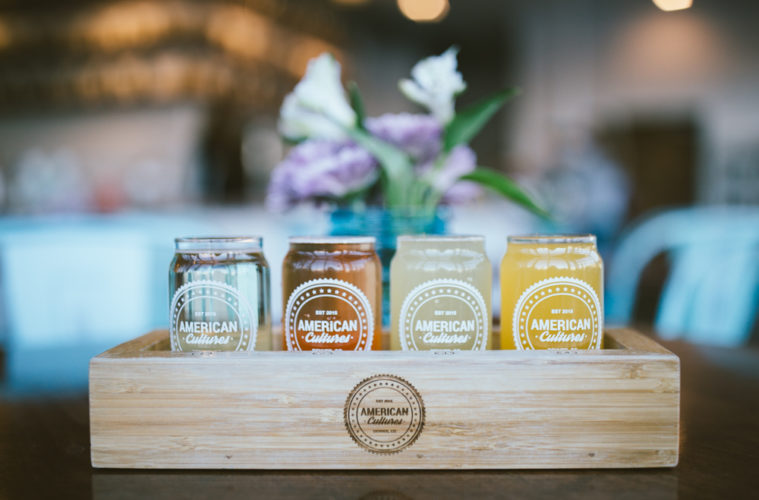 The popularization of Kombucha arguably came along with the introduction of the hit show Portlandia and the rise of hipster culture. But despite the parodies and jabs at the now trendy fermented tea, the drink can now be found in grocery stores and markets as well as on tap at several breweries in Denver. The drink’s popularity doesn’t seem to be slowing down either — especially now that it has its first taproom in the Mile High city.

American Cultures Kombucha Taproom is a collective of Colorado kombuchas settled on Tejon Street across from Señor Bear. Founded in 2015 by Danielle and Noah Brooks, the couple came up with the idea after they had been serving kombucha floats to their boys. Starting off as a food or rather ‘kombucha’ truck — its success yielded expansion to a storefront.

The LoHi storefront is very minimalist — white walls, light blue chairs and huge windows giving views of a cozy, attractive area of the Highlands neighborhood. If you’re looking to switch up your work routine from the usual coffee shop workspace — this is a good option. It’s tranquil — and the kombucha gives you energy minus the jitters (wifi, too). It’s also a spot for early evening hangs staying open until 7 p.m. on most nights.

In addition to being a bar for local state kombuchas, other locally made products are sold as well. “American cultures is a community place for local entrepreneurs to showcase their products,” said Brooks. Products include Binnie’s coconut butter, Pearl Street Lights candles, PB Love Co. nut butter and more.

Its rotating taps of 14 different kombuchas to choose from should be enough for any enthusiast. Koucha berry, orange basil, ginger peach and turmeric hops are just a few of the current flavors. Seasonal varieties include Soham’s spiced apple and Trubucha’s fall spice. Brewers from all over the state are featured including Denver’s Happy Leaf. We suggest a flight of four medium-sized pours to find your favorite.

If you want a sweet treat, try a kombucha float. Chocolate, vanilla and vegan vanilla ice cream are offered with any flavor kombucha. Food options include fresh burritos and tamales that are brought in daily.

“We just got our liquor license so we’ve added a couple of beers to the tap lineup,” said Kombucha pourer, Aubrey Piaget. “Soon we will start doing some kombucha cocktails and we’re also going to get two different types of wine to go on tap.”

Other drinks include kombucha mimosas and bloody marys made with the Real Dill bloody mary mix. It’s worth mentioning that they serve coffee as well — though, the kombucha is where it’s at. Many regulars come in for the 32 and 64-ounce growlers, making it a one-stop-shop to have a glass and then take a jug home. As for plans of expansion, it’s a possibility. “We named it American Cultures so we could go anywhere in the US,” said Brooks. “And open kombucha taprooms that are locally sourced.”