When it was announced that Machine Gun Kelly (MGK) would headline Red Rock’s annual Halloween show, it was hard to ignore the public backlash he received surrounding his beef with Eminem. After seeing various videos of MGK getting showered with “boos” at his live performances, it could’ve been assumed that the same might happen at Red Rocks. Instead, he was met by an extremely large and loyal fan base eager to see him perform. Despite a sudden rush of cold weather that forced some out before the main acts, Halloween on the Rocks was filled with electric performances and dedicated fans. 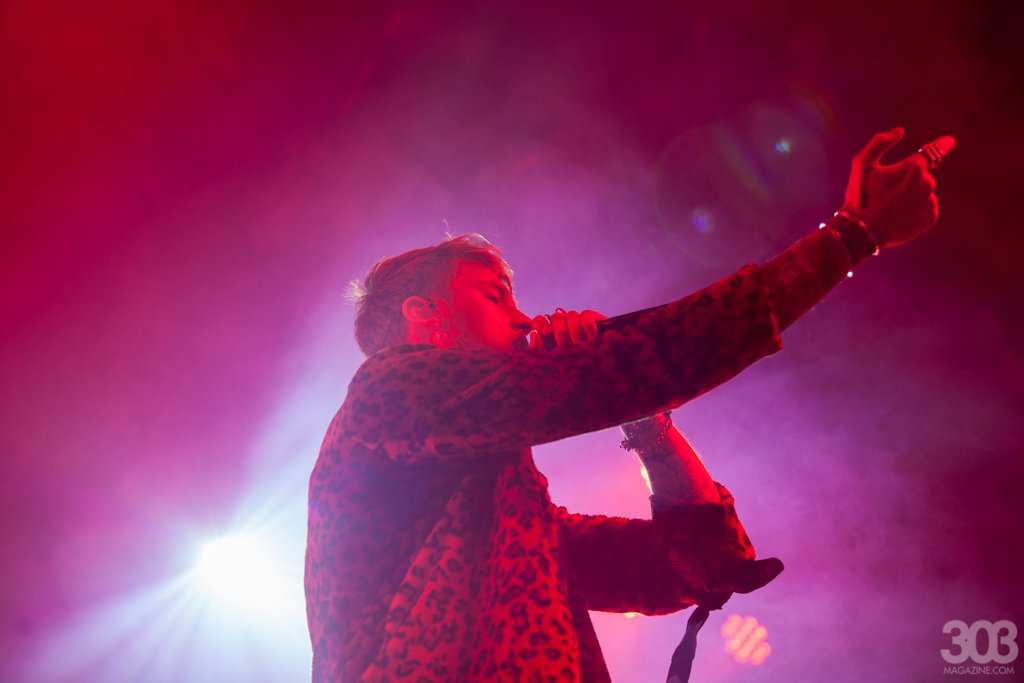 As the venue started to fill up, openers Reo Cragun and London Richards kicked off the show. England-native London Richards fused his smooth R&B vocals over bass-heavy beats throughout the 30-minute set. Richard’s quick set included his self-produced and engineered hit, “Far Away,” which finally got the early crowd off their feet.

Next up was trap producer DJ Esco, well-known for his work with artists like Future, Young Thug, Lil Uzi Vert and many others. Esco’s set not only got the crowd singing along to popular tracks like “Too much Sauce” and “March Madness,” but also significantly turned up the energy of the audience. Out of all the performances throughout the show, DJ Esco provided one of the clear highlights of the night. Mixing the intro of Kendrick Lamar’s “m.A.A.d city” with Sheck Wes’ widely popular “Mo Bamba,” had the crowd shouting the lyrics. DJ Esco moved the crowd into a frenzy and had everyone ready to hear more from Future during Juice Wrld’s set.

The R&B group, They., comprised of members Dante Jones and Drew Love anchored the group of openers. The duo settled the restless crowd through their groovy and catchy beats. Jones, a Denver native, was sure to show his hometown plenty of love through the group’s 30-minute set. Emphasizing his dream of performing at Red Rock, Jones helped put on an inspired set. The two vocally flowed alongside each other perfectly, quickly going back and forth rhyming with ease. They. served as a perfect conclusion to the early acts and left the crowd with an energetic wave to ride into the next set.

Roughly 20 minutes after They. finished their set, the venue lights quickly cut out and it was thought that Juice Wrld was about to take the stage. Instead, Mac Miller’s “2009” began to play. Soon, Miller was shown on the big screen performing in his NPR Tiny Desk set. The tribute video continued on with clips of Miller’s performance at Halloween on the Rocks two years ago. After the musician’s unforeseen death this past September, love and support for the Pittsburgh rapper poured in from artists across the music industry including Juice Wrld and MGK. The tribute was an emotional intermission for the show and was followed by a tremendous standing ovation of heartbroken Mac Miller fans. 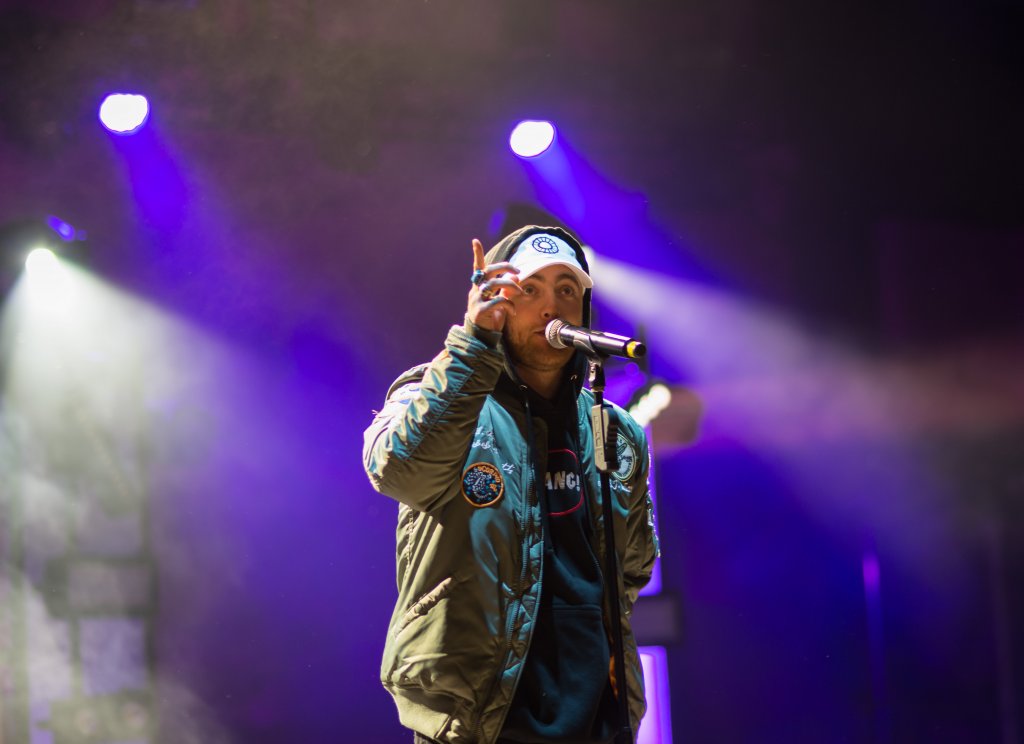 Mac Miller performing at Halloween on the Rocks in 2016. Photo by Alden Bonecutter.

Soon after, the lights faded again and the infamous guitar line of Juice Wrld’s “Lucid Dreams” occupied the speakers. Similar to his last performance in Colorado, Juice Wrld opened and closed his set with his most popular track. Allowing the crowd to a majority of the singing, Juice Wrld consistently cut the beat short and finished each track with an acapella rendition of the lyrics.

Fans were audibly eager to hear songs from Juice Wrld’s recent collaborative album with Future, Wrld on Drugs. However, the album’s only released single, “Fine China,” was the only new track the crowd heard. Although he played fan favorites like “Wasted,” “All Girls Are The Same” and “Lean Wit Me,” Juice Wrld’s set left dedicated fans with plenty to be desired. He inspired a noticeable shift in energy, much like DJ Esco had accomplished, that prepped the crowd for the final set. Overall, Juice Wrld left his loyal followers with the urge to listen to the tracks he left off the setlist. 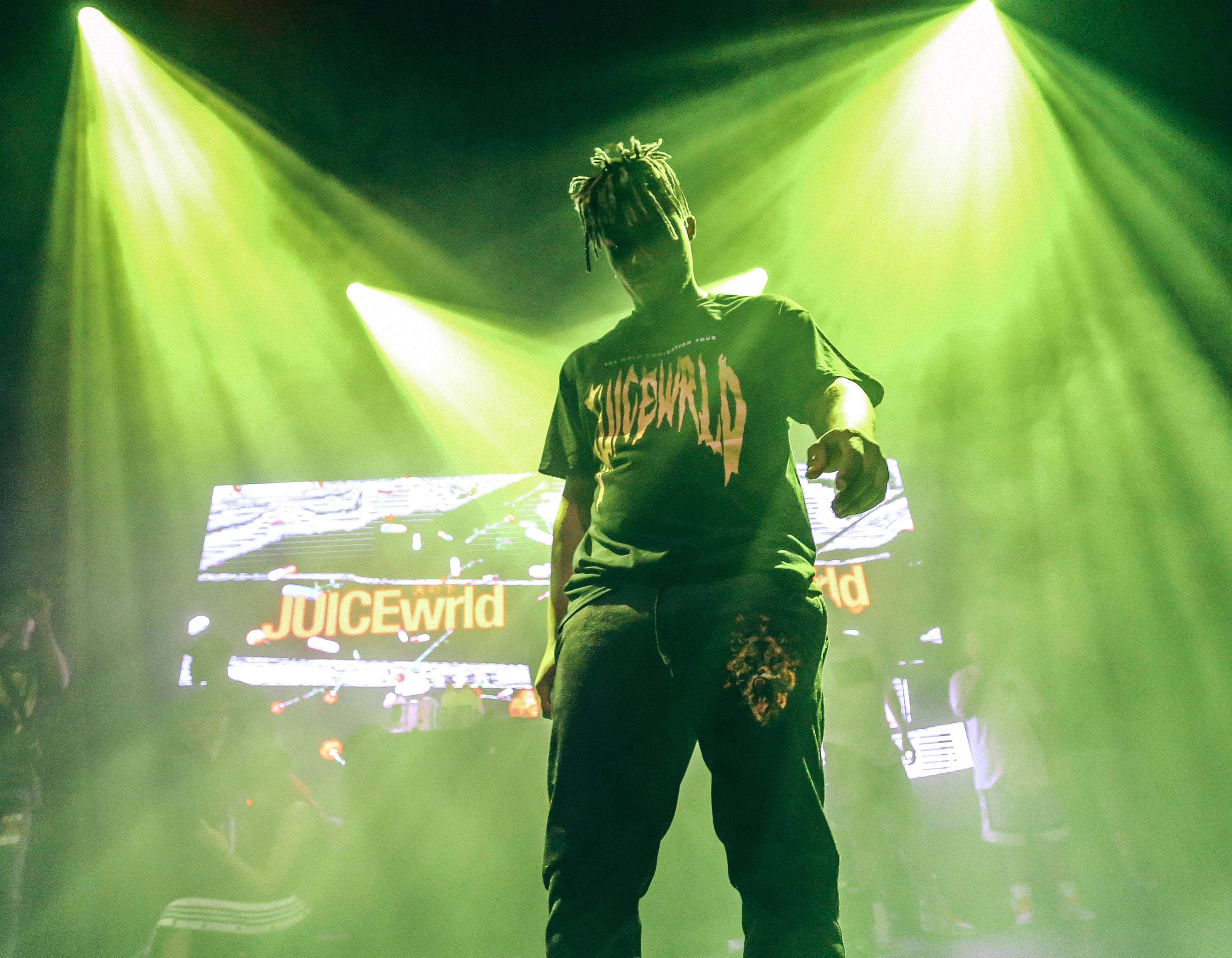 After another 25 to 30 minute break following the end of Juice Wrld’s set, Machine Gun Kelly finally took the stage. The first noticeable aspect of his set was the significant drop in crowd size that happened during the break. Many that remained proved to be primarily loyal MGK fans. MGK made sure to reward these fans with hits off of his 2018 EP, Binge, along with plenty of classics. MGK made sure to remind the crowd of his long-standing beef with Eminem as he delivered a bold performance of “Rap Devil.” With an elevated stage, tantalizing pyrotechnics and a vibrant yellow jacket,  MGK gave a spirited performance for the fans battling with the cold weather.

After seeing the crowd size drop so significantly between sets, MGK delivered his fans a deserved reward in the form of a 23-track setlist. Halloween on the Rocks saw a steady increase in fan support and overall enthusiasm despite the unexpected drop in numbers. Capped by convincing performances by Juice Wrld and Machine Gun Kelly, the show was led and elevated by its headliners. The loyal and costumed fans were gifted with an extraordinary beginning to their Halloween Weekend. The annual show is always a highlight on the Red Rocks calendar and each act contributed to the effort of continuing that trend. Although slightly plagued by the cold weather, long breaks between acts and the decrease in attendance numbers, the show was a successful installment in the annual event.