Anyone who spends any time on Reddit knows that there is a great deal of contention about what it takes to be a grilled cheese. Many people are quite adamant that anything other than the combination of cheese, bread and heat turns the childhood classic into a melt. By that definition the Mile High Grilled Cheese and Beer Festival was all about the melts — the diversity of ingredients and preparations made the occasion a decadent and impressive debut.

The event was held at the Denver Rock Drill — a massive converted warehouse in Rino — and played host to multiple restaurants and culinary groups competing to prove that their iteration reigned supreme. The two-session event gathered more patrons than expected, causing some booths to run out of wares before the end of the second bout. There were a few hiccups that come with a first run, but the event was largely a great success. Full bellies and smiling faces abounded as attendees waddled from the venue — an excess of butter, bread and cheese slowing the crowd to a snail’s pace.

Participants included XATRUCHO’s Edwin Sandoval, Get Fed Concepts’ Taylor West and Savanna Thoemmes, Thistle and Mint’s Jared Kendall, STK’s Jeremy Hill, Éclat Culinary’s Samantha New and WHYLD Hospitality’s Devi Green. Chefs raced from the outdoor grill stations — situated in the alley outside the venue — to their respective booths, large trays of sandwiches in hand. Full sandwiches were sliced and served to eager fans, many of whom braved long lines to taste the bite-sized samples. Most of the participants brought two variations, making the already daunting task of hitting each stand all the more punishing.

Several breweries were in the building, providing samples to help alleviate the boredom that could come from the long wait times. Odell’s, Woods Boss, Burgundian, Stem Ciders, Stranahan’s and several others brought tastes of their products, most of which paired nicely with the bites. Stranahan’s served their hooch from a refurbished Airstream complete with a television showing promotional material, wood interior and a comfortable nook for those who quite justifiably needed a short rest.

Most of the sandwiches were some kind of melt, while a few stuck to tradition. Home Cookin’s Jeff and Leah were particularly adamant — the duo served up a basic grilled cheese and tomato soup combination, making a clear statement suggesting that updating the classic model bordered on blasphemy. At the end of the main event, a panel of judges gave awards to both the most creative and most delicious sandwich, with a third trophy being given for the people’s choice. The most creative went to STK for the undeniably mouthwatering marriage of Cabot Vermont cheddar, pear, prosciutto, rosemary and bayleaf butter. The judges deemed the Whiskey Biscuit’s combination the most delicious and rightfully so — it was made with Cuban choripan, queso Chihuahua, queso cotija, jalapeno bacon and pickled avocado and onion.  However the people found WHYLD Hospitality’s Cabot Vermont cheddar, sourdough, bacon and a Bloody Mary shot the best of the evening.

Ernie Bjorkman from Channel Two News made a short speech. “I know most of you don’t get up that early,” began the newsman, rightfully believing that much of the crowd was more concerned with beer and feasting than current events. Though the second session was supposed to end at nine, most of the involved parties ran out of food just after 8 p.m., though to be fair, by that time most of the crowd was already full to the gills.

If you missed this event, there is a similar one occurring in November. 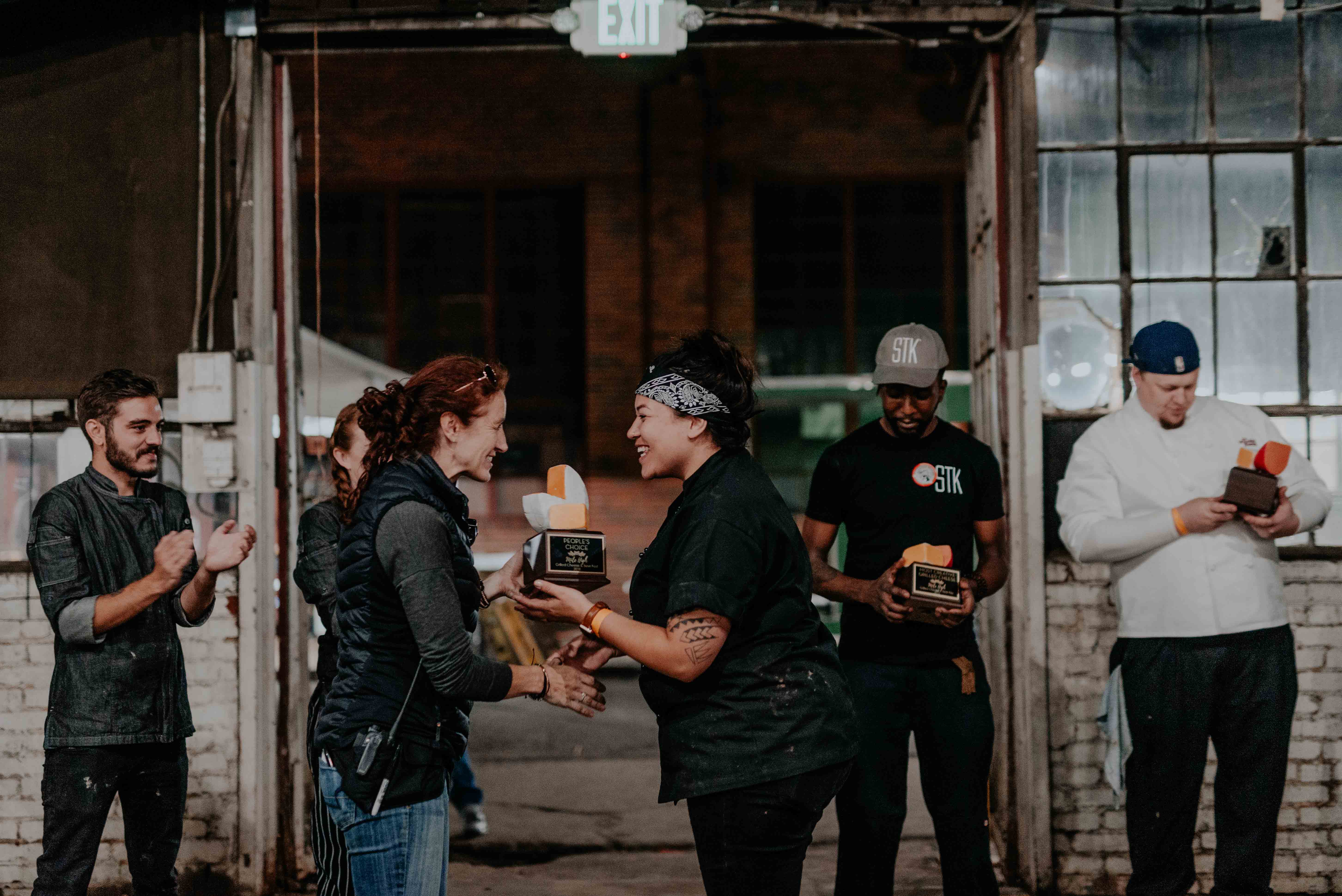 The award winners accepting their trophies.