Aside from the announcement that the artist collective from Santa Fe will build a permanent exhibition in Denver, Meow Wolf has kept quiet about any of the installations that the Mile High city will host. Until now, that is.

Yesterday, Meow Wolf released a teaser video for their newest sculpture project, called “The Navigator.” In the official press release, Meow Wolf describes it as the “first resonant combination of art, cross reality, spatial computing, location-based entertainment and immersive storytelling.” The video shows a participant putting on a headset and stepping up into the 3D printed, laser-cut sculpture, pushing buttons and looking awed. Resembling something that came from a hybrid of Star Wars and Transformers, “The Navigator” facilitates an experience that is both virtual reality (read: unseen by everyone else) and immersive reality (read: you can interact with your surroundings). And, according to CEO and co-founder Vince Kadlubek, “it’s done pretty seamlessly and there’s no nausea — like you would find with typical virtual reality (VR) — you can walk around, you can see other people, it’s not an isolated experience. It’s integrated with the world around you, which is a much more natural relationship with the digital world.”

“The Navigator” is making its debut to the public at Magic Leap’s L.E.A.P Conference in Los Angeles this week in part because the immersive sculpture came to life with the help of Magnopus — an L.A-based animation/VR/AR studio who uses Magic Leap hardware. “We are so psyched to work with them,” Kadlubek explained. “[Magnopus] wants to push the boundaries and the creative streak in that company is very vibrant.” Magic Leap is a “spatial computing company that harmonizes humans’ experience of the world,” the press release from Meow Wolf states. The glasses/headset you can see in the teaser video is a “lightweight, wearable computer that allows digital content to enter the eye as light would from an actual object. Users see jaw-dropping detail up close and mind-blowing scale from afar that step out of the screen and into the real world.”

Aside from the virtual reality component, “The Navigator” was originally developed by a Meow Wolf team effort. “It’s a product of our concept art team and our design team, our architecture and engineering team and our application and tech team. It really is a cross-departmental project. We even have the entertainment, storylines, character development and animations involved. It’s become its own project and storyline so it’s touching all parts of the company,” Kadlubek explained.

To excite audiences further, Meow Wolf has teased the storyline behind “The Navigator:”

Eemia is a peaceful planet whose orbital stability depends on brave explorers called Navigators and their “Mech” transports. When one of Eemia’s three suns exploded decades ago, the planet was pushed into an ever-decaying orbit and eventually became encased in ice. A new generation of Navigators must learn to pilot the Mechs and save their planet from endless winter. Time is of the essence — and visitors to the exhibition are intimately involved.

After traveling to different conferences in the next year or so, the mixed reality sculpture will eventually come to Denver, living in a “massive, mixed reality multiverse” as Kadlubek explained. “All the content we are creating now will end up in [Las Vegas and Denver]. And so we will have more significant sculptures. [The Navigator] is one of the more significant sculptures because it integrates with Magic Leap hardware — a spatial computing component. We are really excited about adding that layer of mixed reality to our exhibitions. It’s a new component to our company. We’ve been working with the Magic Leap tech for about six months now, but we are also looking at stuff that Microsoft is doing and Oculus and various types of tech to determine which is the most consumer-ready by the time the Denver project opens.” 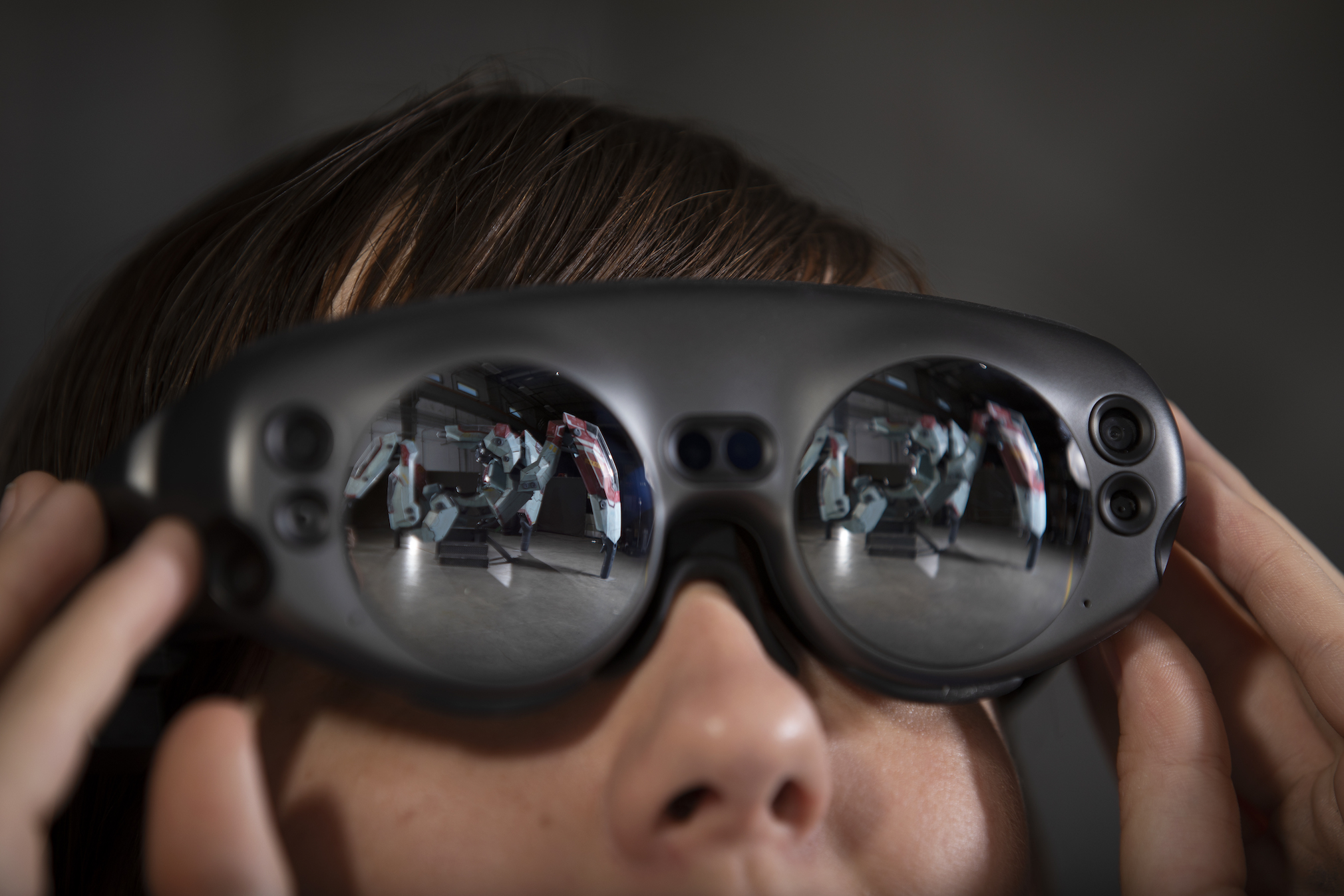 The Mechs in prep for the Magic Leap conference in Los Angeles, CA.

But “The Navigator” will only be one small contribution to Denver’s exhibition since the new mixed reality sculpture takes up about 100 square feet, and the Denver Meow Wolf will have 90,000 square feet in total. “It’s a huge feat for the company, it’s a gigantic step up in how we create and what we create,” an excited Kadlubek commented while visiting L.A for the debut of the sculpture. Until now, the installations at the permanent exhibition in Santa Fe, House of Eternal Return have relied heavily on physical interactivity. But with this announcement, fans of Meow Wolf’s interactivity can look forward to an experience aggrandized by the digital world while still keeping the physical component. According to Kadlubek, with the Magic Leap technology, the new Meow Wolf exhibitions will cater to hundreds of people wearing the mixed-reality headsets. They’ll be able to interact with one another but they will also have to interact with the digital world — with animated characters able to jump out of TVs, turn off lights and do other “real” tasks.

“Yes, The Navigator is a really exciting component of the Denver exhibition and the Denver storyline but there is a lot more to be experienced and we’ll be revealing the name of the exhibition and more of the story and the theme in 2019,” hinted Kadlubek. Needless to say, we’re on the edge of our seats.

All photography courtesy of Meow Wolf.