We Tried It – Archery Meets Dodgeball in Arvada

You can always play a pickup game in Wash Park if the weather’s nice, but if it’s rainy, you and your friends can still burn off some steam playing indoors. Archery Games officially opened a new Denver location on March 1 earlier this year in Arvada, and they invited 303 to try the game that mixes archery and dodgeball. The result is a real workout that you probably haven’t done before and don’t get to do every day. Plus shooting a bow and arrow is probably the most empowering thing ever. Legolas, Katniss Everdeen and Hawkeye would be impressed. Give it a go for only $25 and see for yourself.

For someone who has never shot a bow and arrow before, entering the target practice area was a little intimidating, but I wasn’t alone. I brought my roommate so I wouldn’t feel embarrassed all by myself but learned that you could come to play alone or bring your own group. Only 20 players maximum can participate in Archery Games (10 on each team), and the scheduled times are dependent on who signs up. The company will let its employees play with you if you are short or have an odd number of people, but you need to book your game online so you know what time to play. Before we started training, our instructor ran us through the basics of archery — it looked easy, but it wasn’t. My hand-eye coordination naturally isn’t great, but my instructor assured me anyone could do it — after all, all I really needed was an armguard and protective face mask — so how dangerous could it be? I strapped my armguard around my left arm to practice shooting with my right and was surprised to find the bow was incredibly lightweight. I was also happy to learn that the arrows didn’t have the pointy tips that would cause a serious injury — instead, they had round foam ends for a much softer impact just in case someone targeted me. To shoot the arrow, my instructor showed me the proper technique for loading the arrow into the bow and then holding my elbow slightly raised and loose before aiming. I didn’t hit the target on the first try, but got a feel for it — and was confident that after a while, I might actually get the hang of it — even become good at it. I had 25 minutes to practice before entering the arena (which was included with my admission fee) and got a bit better before it was time to play. I was a little nervous when training ended, but confident that I wouldn’t wind up hurt even if I were the worst player on the field. 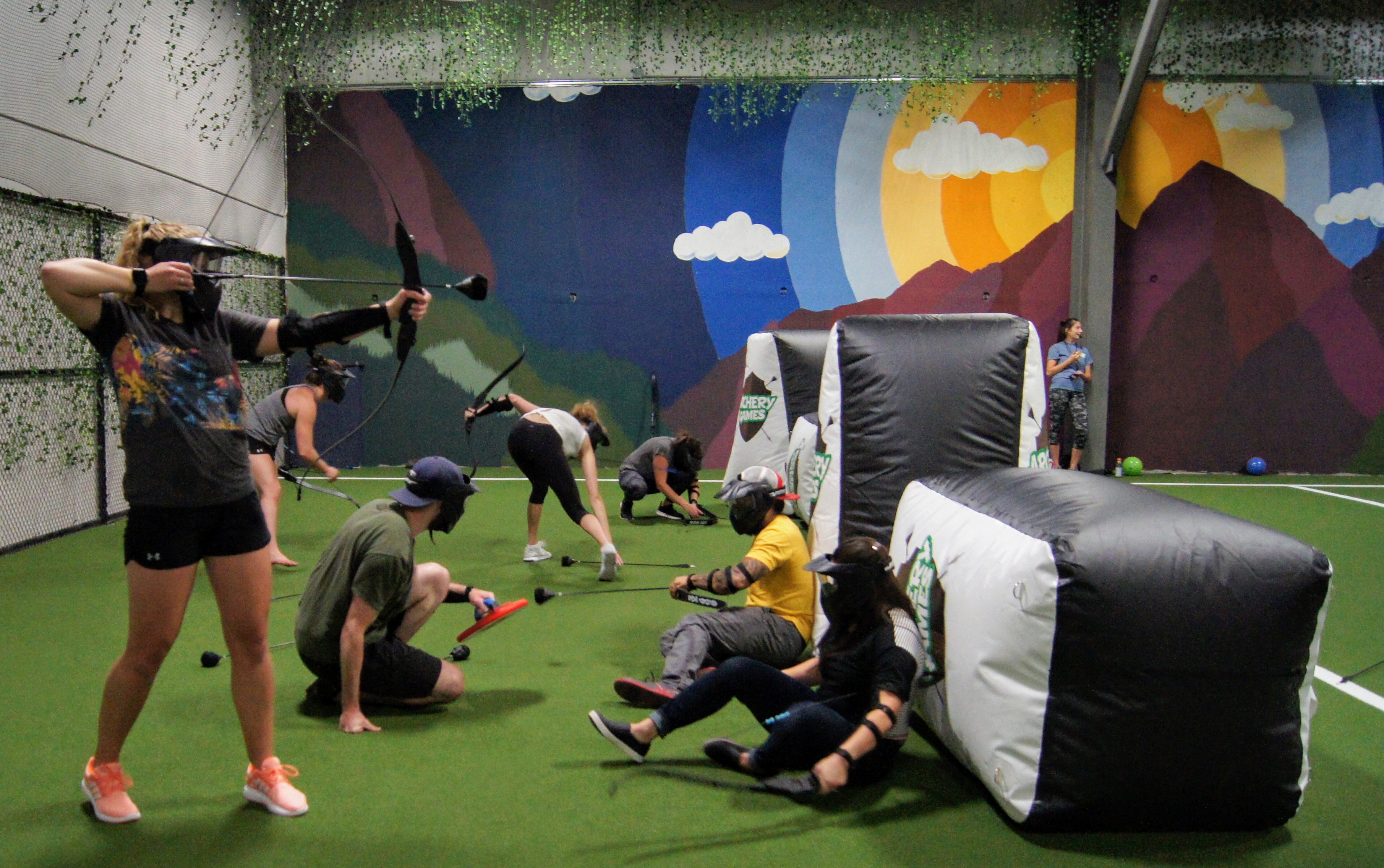 My referee didn’t say “Let the Hunger Games begin!” but I still felt like Katniss Everdeen — if Katniss Everdeen took 30 minutes to load her arrow. Just like in dodgeball, the game started with the players touching the wall before rushing to the middle to grab as many arrows (dodgeballs) as they could before scurrying off to hide behind obstacles and aim at the opposing players. It wasn’t the shooting that was hard; it was loading the damn thing. I hadn’t quite figured out how to diligently load the bow into the string and draw correctly, but my release was powerful. At first, I was embarrassed that my arrows wouldn’t even make it to the other side of the arena, but then I learned they actually were traveling too far—past the players on the other team I was supposed to hit and into the walls.

The archery teams—which each consisted of five players were divided into two sides and our referee had us play a short game first called Zombie Apocalypse where the teams would shoot at each other, and if you were shot, then you would have to join the other team. Whichever team had the most players when the clock ran out, won the game. The first game didn’t seem to last very long, but that might’ve been because I didn’t shoot very many arrows while I was still getting the hang of it. While some of the players in the arena reloaded frequently—others took time to figure out their positioning. My team didn’t win the first game—but I was confident we were going to get better.

The Archery Games lasted for about 50 minutes total and we played five different games with different rules—each game increasing in difficulty as time went on. The last game we played was every man or woman for his or herself—with everyone shooting at each other until the last two agile players got to duke it out. By the end of the games, my team had one a couple matches—and I actually got two players out all by myself. I was definitely better at shooting and the whole thing was really, really fun. 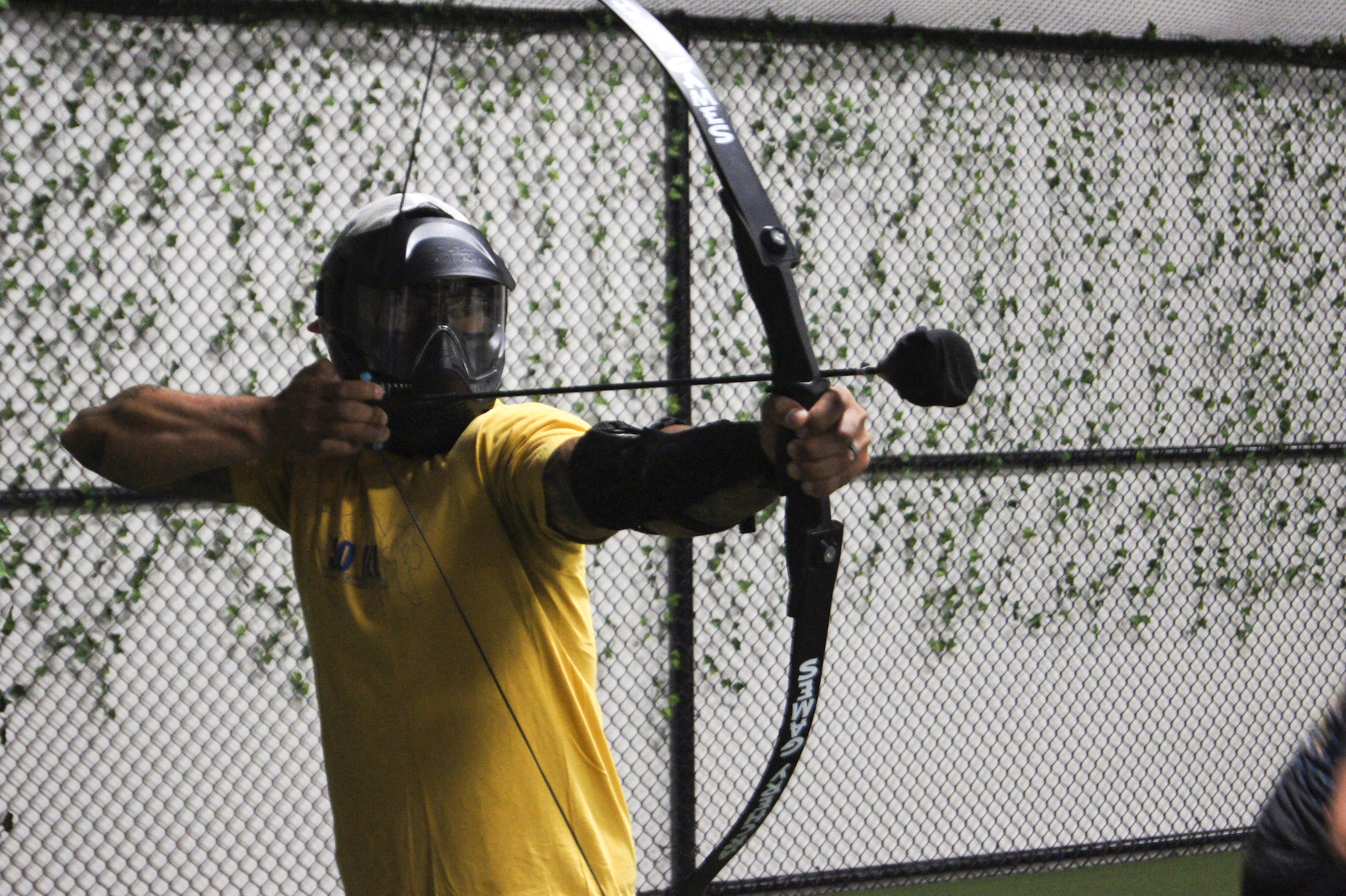 All in all, I was hit by a couple foam-tipped arrows, but didn’t have any bruises. I definitely worked up a sweat breathing inside that helmet and doing a lot of running, ducking and shooting. Archery Games is definitely challenging and works a lot of muscles you wouldn’t think—my shoulders ached the next day and my thighs from squatting, crawling and pulling back on the bow. I also felt like kind of a badass since the boys who probably spent time in the paintball arena didn’t seem much better than me. I may not as good as Katniss, but I’m definitely going back.

Archery Games Denver is located at 5405 West 56th Avenue, Unit D in Arvada, and is open Saturday and Sunday from 10 a.m. to 8 p.m., with private booking available Monday through Thursday. To play, book online here.