When you visit the Denver Art Museum (DAM) you’re greeted by a large metallic dustpan and broom. The oversized sculpture is by Claes Oldenburg and Coosje van Bruggen. Soon, the married artists will have much more of their work on display at the DAM because the exhibit Claes Oldenburg with Coosje van Bruggen: Drawings was announced today. Presented in association with the Whitney Museum of Art, the showcase of their work will open on October 7, 2018. Organized by the DAM and curated by Julie Argur, the exhibit presents 39 drawings and one sculpture from the artists’ careers from 1961 t0 2001.

Sculptures by the two artists can be seen in cities throughout the world — including Denver, Los Angeles, Kansas City, Tokyo, Berlin, Milan and more. This exhibit offers a unique look into works on paper done by the two artists famous for their monumental and creative sculptures. 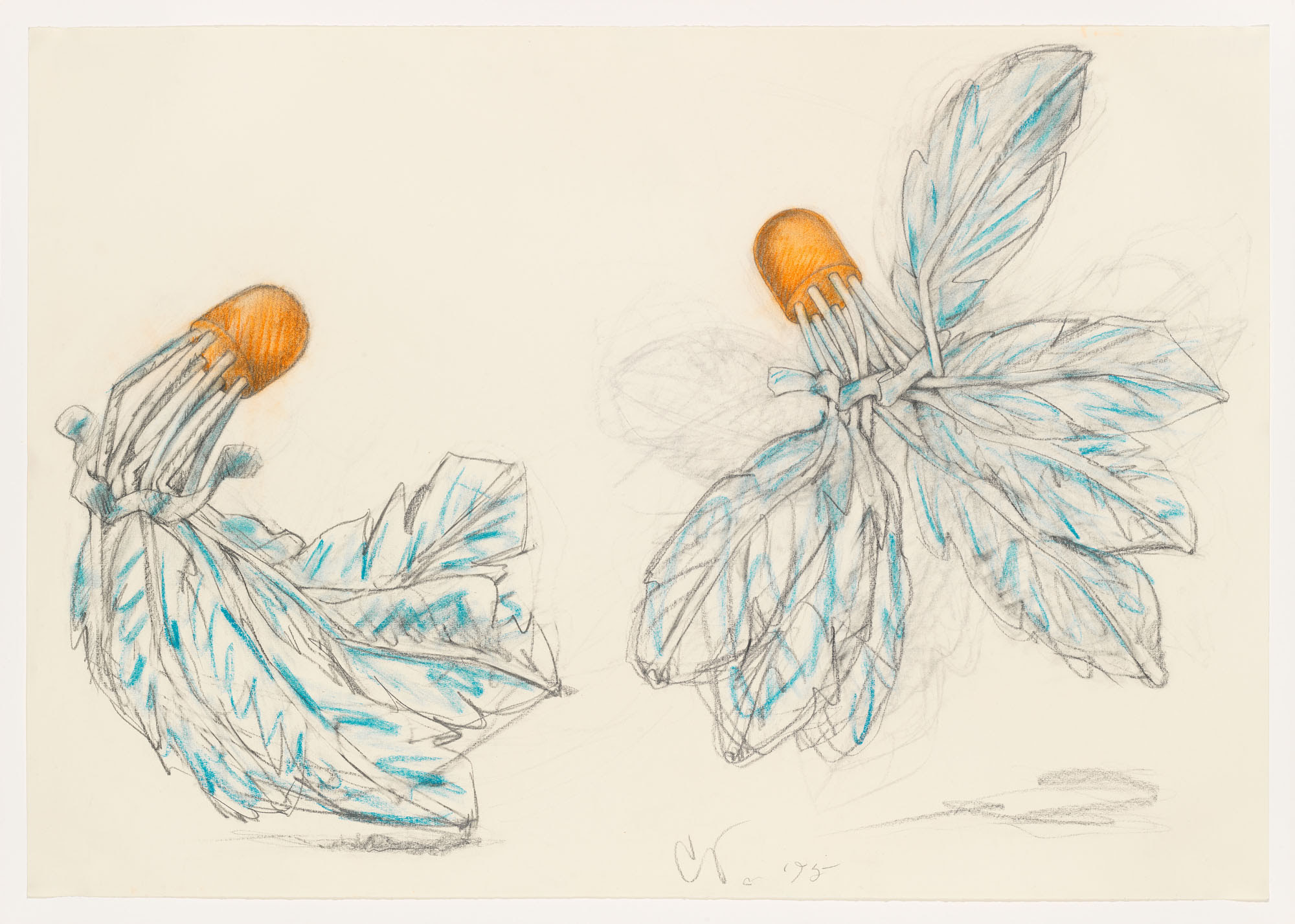 “Claes Oldenburg with Coosje van Bruggen: Drawings provides us with the unique opportunity to unveil the playful and curious process and artistic vision of two beloved contemporary artists whose work, Big Sweep, is permanently situated in front of the museum and proudly welcomes visitors to the DAM every day,” said Christoph Heinrich, Frederick and Jan Mayer Director at the DAM. “With a keen eye and generous spirit, Julie Augur has curated a masterful survey of work by Claes Oldenburg and Coosje van Bruggen, exclusively for the Denver Art Museum and our visitors.”

The exhibit chronologically highlights the way Oldenburg and van Bruggen re-invented their form. Claes Oldenburg with Coosje van Bruggen: Drawings begins with studies of Oldenburg’s first well-known monumental soft sculpts of the 1960s and culminates with drafts of the pair’s large-scale painted metal sculptures of the 1990s and early 2000s. 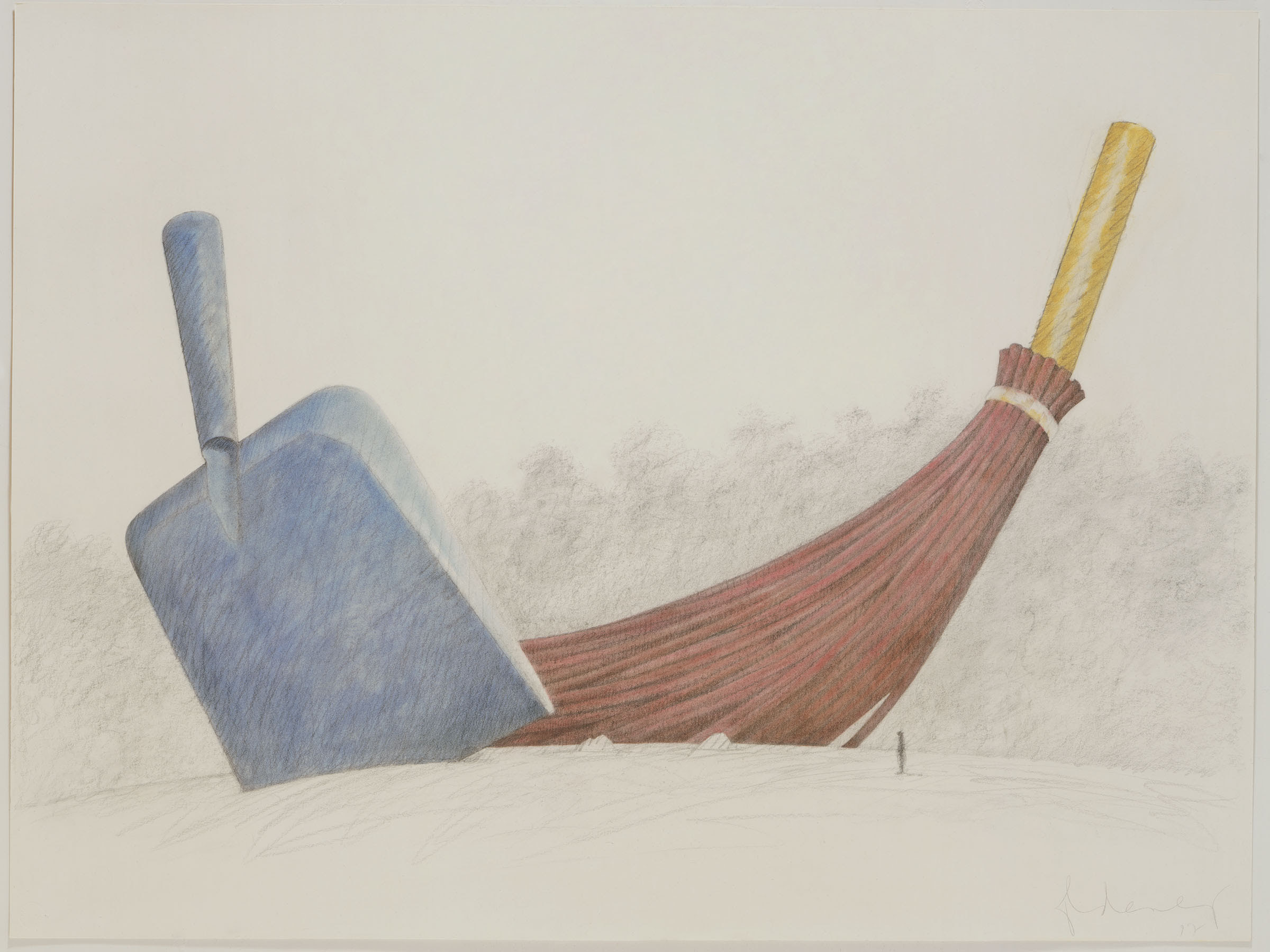 “If you’re true to the art process, it’s by nature metamorphic. Line especially can do anything, can be anything,” said Oldenburg.

In addition to The Whitney, the exhibit features artwork on loan from the Oldenburg and van Bruggen studio and Ryobi Foundation Collection alongside one work from the DAM’s permanent collection.

Oldenburg — a life-long artist — was born in 1929 in Sweden where he was artistically inspired by the toys of his youth. After becoming a US citizen in 1953 and moving to New York in 1956 Oldenburg heavily contributed to the pop art movement of the ’60s. Van Bruggen — born in 1942 in the Netherlands — a Dutch art historian and curator met Oldenburg in 1970. The pair began collaborating artistically in 1976 and were married in 1977.  Oldenburg — 89 — lives and works in New York. Van Bruggen passed away on January 10, 2009.

The exhibit will be on view on level 2 of the Hamilton building in the Gates Family Gallery from October 7, 2018 to January 6, 2019. Access is included with general admission which is free for members and youth under 18.