1998 gifted the world with many things that still influence us today. Microsoft became the biggest company in the world, “Harry Potter and the Chamber of Secrets” had just hit the shelves and Lauryn Hill changed the way the mainstream would look at women in hip-hop forever. The Miseducation of Lauryn Hill, which was released 20 years ago last month, sold 422,264 copies in its first week breaking the record for the most first-week sales by a female artist. The album earned 10 Grammy nominations at 1999’s 41st Grammy Awards — more than any woman had ever been nominated in a single evening. Hill won five of the 10, including album of the year, making The Miseducation of Lauryn Hill the first ever hip-hop album to win album of the year at the event. The success of The Miseducation of Lauryn Hill sent Hill’s popularity soaring to superstardom, and is considered responsible for bringing neo-soul and certain ranges of hip-hop to the center stage of popular music. 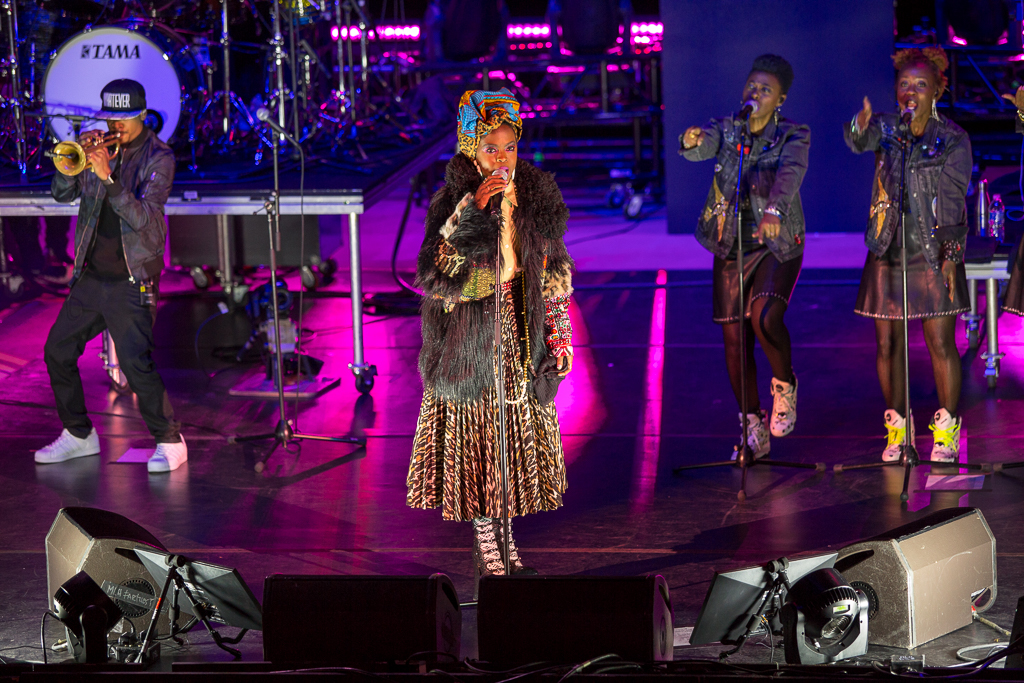 Hill brought the prodigious album to Red Rocks on Wednesday night, to eager fans who have stood by for two decades, some waiting to hear the record again, others for the first time. Hill brought along her friends of equal talent, Shabazz Palaces — a hip-hop duo from Seattle consisting of Palaceer Lazaro (formerly of Digable Planets) and Tendai “Baba” Maraire, the multi-instrumentalist son of Mbira master Dumisani Maraire. Talib Kweli, a long time defender of Hill’s character was also in attendance, warming up the crowd with his intelligent and often politically motivated rhymes. The swift last minute changes to the original openers of the tour, including the cancellations of Santigold and Nas, have been highly publicized, although little has been done to explain why other than vague “production issues.”

Nevertheless, the show went on. Shabazz Palaces rocked the first opening set of the night with their interesting stage set up and outfits, including an intricate drum set up and a full-face visor. The music showcased the unique talent and dedication the two are known for and helped warm up an otherwise chilly evening. Lazaro’s familiar voice rang nostalgic reminders to the sounds of classic hip-hop days. Kweli then took the spotlight to pump the jam of the evening up to a higher ground. Kweli is no stranger to Red Rocks, having just played an opening set in July with Mos Def to perform their collaboration, Black Star. Kweli spit his flame lyrics while DJ Spintelect ran beats from Wutang and The Jackson 5. He then gifted the audience “Definition” of the Black Star album and brought out female rapper K’Valentine (from his label) for a track of her own. The rapper then ran down a quick “Get By” and left the stage exactly 30 minutes after beginning. 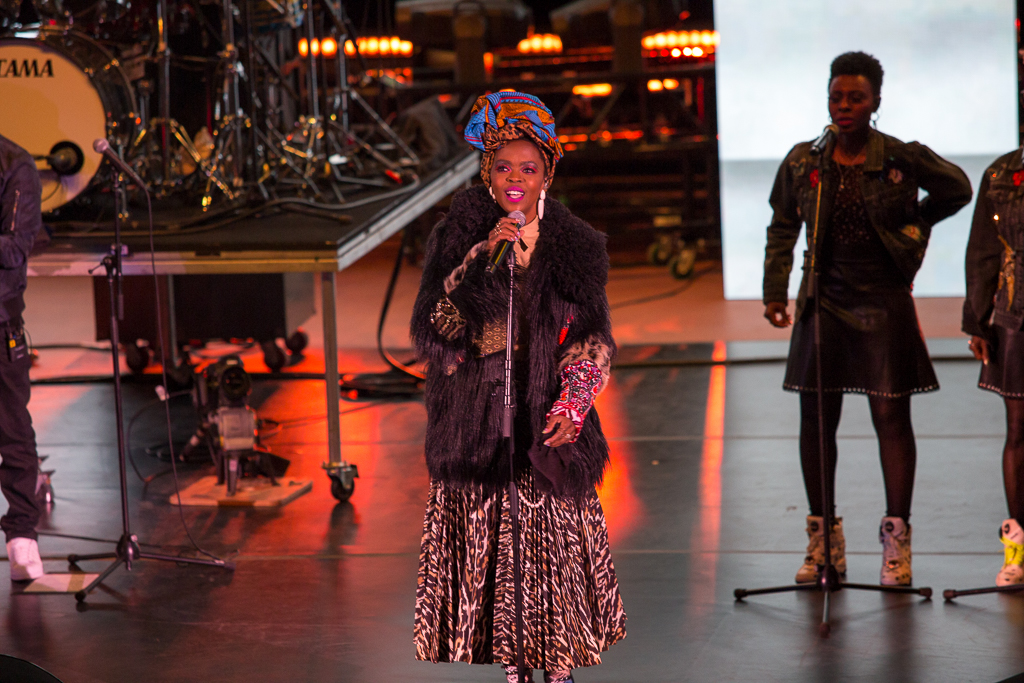 Hill, in her expected form, did not hustle onto the stage right away. Over an hour passed after the opening sets and there was an icy sense of apprehension in the air awaiting her arrival. Tainted by a rough reputation of delaying performances or not showing up at all, the online discussion was fiery regarding Hill’s lack of rush to the stage. With Red Rocks’ notoriety for enforcing a strict curfew, delaying a set until 10 p.m. can be a bold move. Luckily, DJ Reborn was there to fill the gap, although her spins were met with mixed reviews from the crowd. Alas, eventually the band members took their places, signaling the moment was close for the queen to join.

Join she did. Hill stepped on stage looking like a true diva in a gorgeous head wrap, bougie fur coat and quite honestly the highest platform shows imaginable. Video montages behind her lit up her stage as she commandeered “Lost Ones” and “Everything is Everything” right out of the gate with her 10 piece band behind her. While her voice was nothing short of amazing, Hill did seem an octave lower, which she confirmed by discussing a head cold she was experiencing.

“20 years, everybody,” Hill exclaimed to her audience. “Happy Anniversary.”

Hill’s renditions of the beloved favorites off of her hit album had her fans roaring the lyrics along, from “Final Hour” to “Every Ghetto, Every City.” The upbeat performance took a turn to devastation when she reared her voice to the heartbreaking tale of “Forgive Them Father.” The lyrics, “They say all the right things, to gain their position / Then use your kindness as their ammunition / To shoot you down in the name of ambition, they do / Forgive them, father, for they know not what they do,” strike an emotional chord on their own. Along with the video collage of police brutality against people of color playing behind her powerful voice, it was difficult to not allow the tragic realities of our society take over the good time feeling. 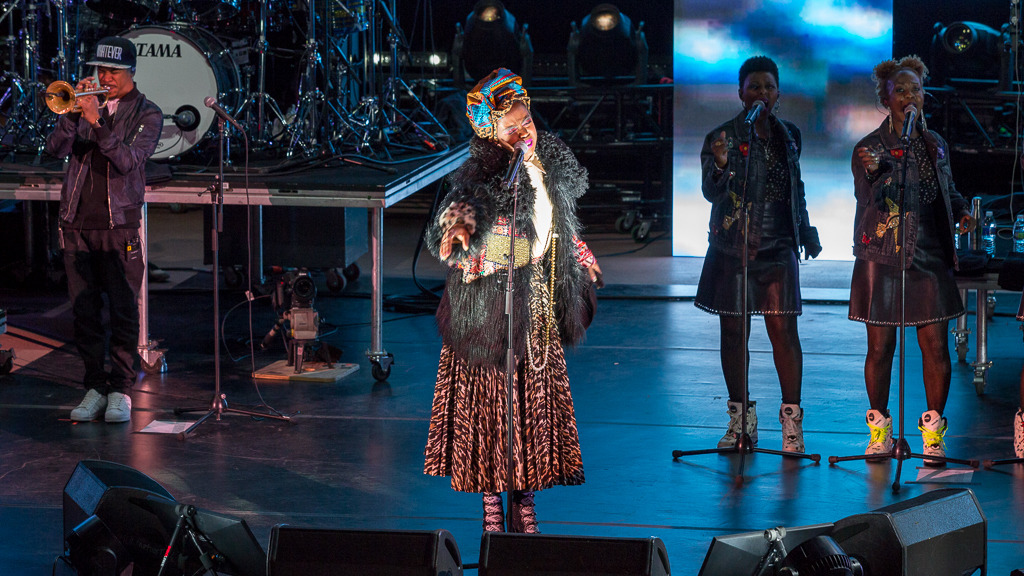 Hill brought it back with her sweet cover of “Can’t Take My Eyes Off of You,” which she conducted enthusiastically from the front stage. After a few more, she took a moment to preach the trials she faced in creating the album, thanked her supporters and went into the highly anticipated “That Thing.” At nearly half-past 11 p.m., Red Rocks had apparently met their time limit and threw on the house lights right at the beginning of the second verse, famously “dedicated to the men.”

Does it ever get old seeing a true icon under the bright lights of Red Rocks? The answer is certainly no, and as long as Hill and her friends continue to grace the Mile High city audience with her remarkable contribution to music as it stands today, the masses will present themselves to experience it. The 20th anniversary of The Miseducation of Lauryn Hill was a celebration for all music fans and the 40th will be sure to be just as treasured.