Max NasonSeptember 16, 2018Music
All photography from the Game of Thrones Concert Experience in 2016 at the Pepsi Center and by Meg O'Neill.
Home
303 Magazine
6 min read

Back in late 2016, German composer Ramin Djawadi announced an international tour. With the help of HBO, Djawadi would embark on a two-month, 24-concert tour bringing the hit show Game of Thrones to North American audiences. Along with Game of Thrones, Djawadi has created scores for other groundbreaking shows like Westworld as well as films like Pacific Rim and Iron Man. His tour, however, which features a live orchestra and choir, was something entirely new to the composer. After touring 23 European cities, Djawadi brought the live experience back to North America. This time, however, the composer and his supporting cast incorporated the best moments of the seventh season into the performance. 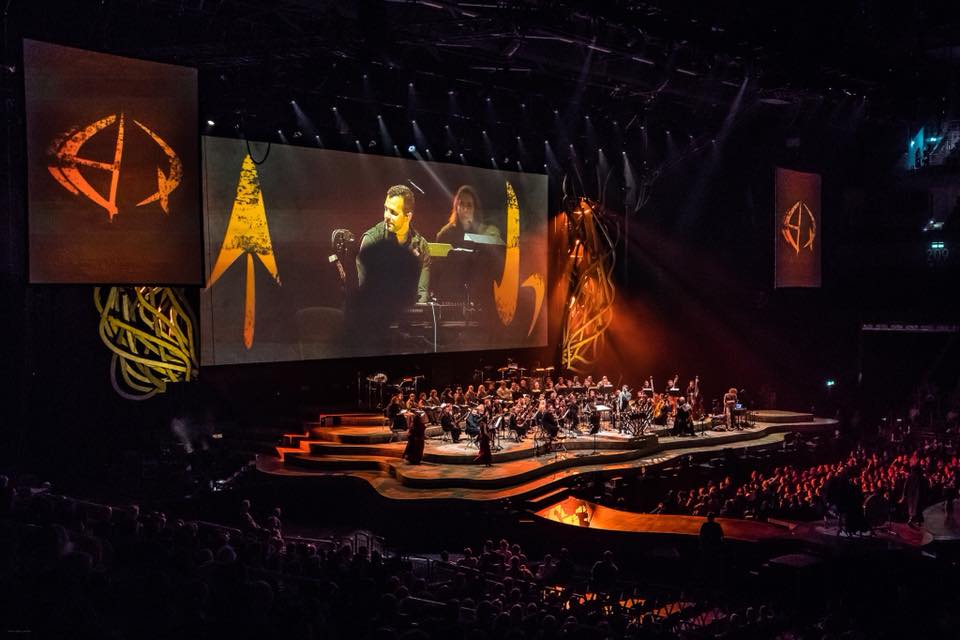 Upon arrival, fans were greeted with a warning from Cersei Lannister (Lena Headey) herself. “Those who violate the rules will be boiled in the blood of their children” echoed throughout the arena speakers as she asks for all to silence their phones. The show began almost instantaneously with the distinctive tune of the show’s title theme song. The melody of the song was brought to life through the massive ensemble of string instruments, with powerful background percussion leaving you with goosebumps.

The show is split into two acts, with a 20-minute intermission in between the two giving fans to catch their breath before the season six and seven actions. It meshed the best moments of Game of Thrones with the flawlessly executed performance of Djawadi’s and his crew. With the help of a local Denver orchestra and choir, Djawadi brought scenes like “The Red Wedding,” “The Battle of the Bastards” and the famous season seven finale to life on the big screen. The combination of strings, horns and percussion flowed elegantly along with the clips being shown.

Not only did Djawadi lead the ensemble with class and elegance, but he even joined in on some of the action himself. In between guiding the orchestra, Djawadi showed his musical talents ranges beyond scoring film and composing. Showing his skills on instruments like the piano and electric guitar, Djawadi added breathtaking contributions to the music. He even gave away several production secrets for Game of Thrones. For instance, the Grammy-nominated and Emmy Award-winning composer told the crowd that he watches entire seasons of the show before adding his original score to the scenes. 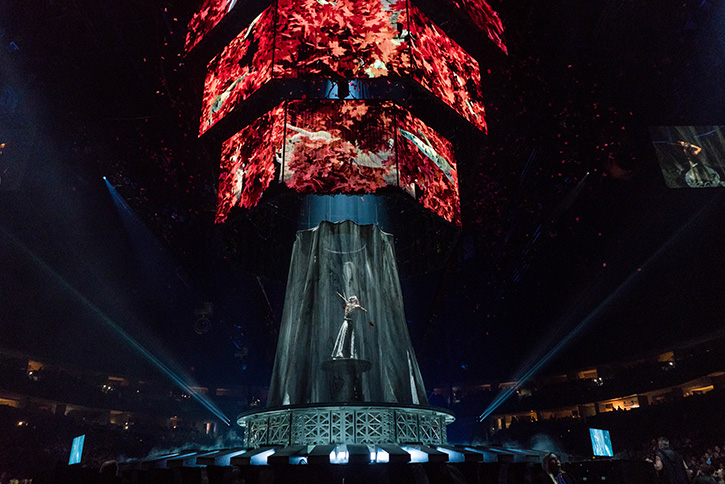 While most of the performers were not mentioned by name, several standout stars that Djawadi made sure to give special credit to. The first of those was violinist Molly Rogers. In miraculous fashion, fans saw Rogers harnessed and lifted to the rafters of the arena while effortlessly staying in tune. Rogers’ opening performance was one of many show-stopping displays that captured the eager group of fans. Along with Rogers’ powerful displays on the violin, many of Djawadi’s recurring crew and visiting orchestra stole the show. Utilizing unorthodox instruments such as the didgeridoo, the surrounding performers intensified the background scenes in perfect sync.

One of the most spectacular aspects of the performance was the way in which Djawadi and his group of musicians and singers matched their music with on-stage lighting and pyrotechnic effects. In the midst of intense string riffs and pounding drum lines, fans got to see Daenerys Targaryen light the stage up in flames. Cutting out the music for Khaleesi’s iconic “Dracarys” line, flames emerged from both the stage and ceiling before the orchestra continued the action. 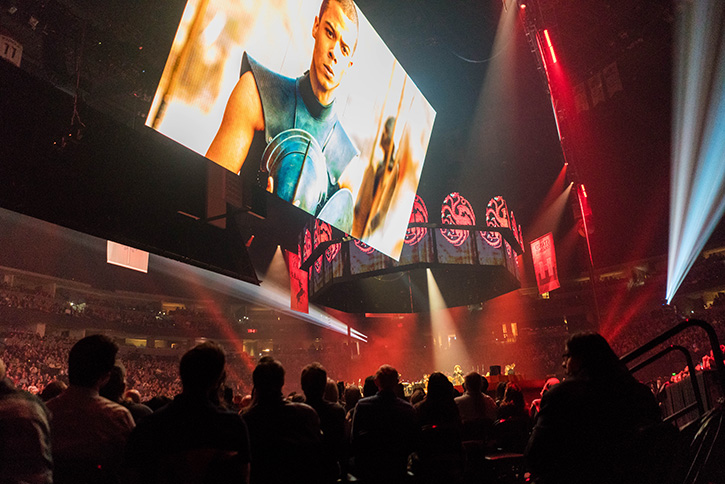 The addition of the score for season seven elevated Djawadi’s show to new heights. Not only did the season’s most memorable scenes have fans engaged and cheering, but it also built upon the already massive amount of anticipation for season eight. Seeing the white walkers burn the wall to the ground behind Djawadi’s group had every fan and non-fan alike eager to see what happens next.

Djawadi beautifully brought the show to its conclusion by replaying the show’s title theme song, this time letting the crowd sing the tune along with the choir. His ability to keep the crowd engaged in the music and the way he vocalized his appreciation for the fans and his crew emphasized the beauty of the Game of Thrones community. The Game of Thrones Live Concert Experience is unarguably the most ideal way to enjoy the show. With the show’s famous scenes flowing behind the magical performances of several orchestra members, Djawadi has created an experience that highlights the most enticing aspects of the show. 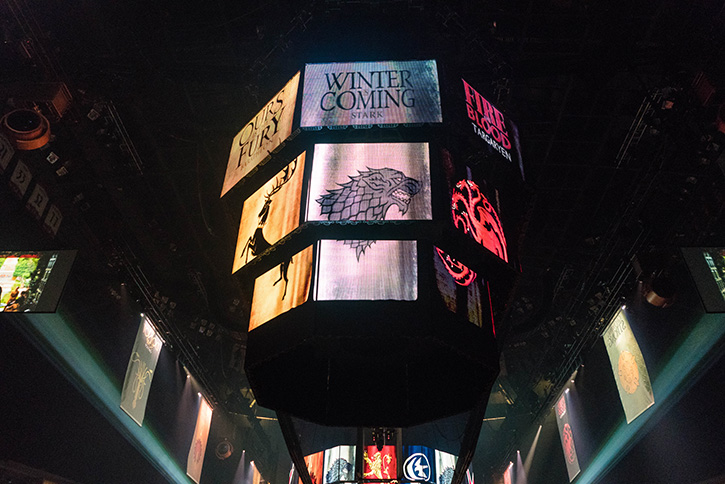 The orchestra and choir’s performance was not the only thing keeping the crowd involved — it was the sight of their favorite characters and scenes that made for an electric night. Dedicating individual compositions and themes to specific characters, fan-favorites like John Snow, Tyrion Lannister and Arya Stark had the crowd screaming and wanting more. If you consider yourself a die-hard Game of Thrones fan and find yourself craving more action, Ramin Djawadi’s live concert experience is the fall show for you. The concert’s elegance, intensity and flawlessness bring the show and Djawadi’s score to life in a way unlike anything you’ve seen before.

Djawadi is taking his tour to 17 more cities before focusing his efforts on the season eight score. The tour wraps up on October 14 in Toronto. With fans unaware of season eight’s release date it could be suspected that Djawadi finishing his tour and creating the score means the new season will be finished filming by late October.

All photography from the Game of Thrones Concert Experience in 2016 at the Pepsi Center and by Meg O’Neill.