Last night, the This Song is Sick rooftop patio — no larger than a big living room — played dance floor to around 100 Big Gigantic fans. Earlier this year, the media company hosted a rooftop party featuring Louis The Child which went well enough that they decided they need to do more with the idea. The Big Gigantic show was the kickoff event for their new live stream/rooftop party series, “The Sauce.” To gain access, fans could enter to win tickets online or attend a meet-and-greet down the street where the first 50 to arrive were allowed to go to the private party. 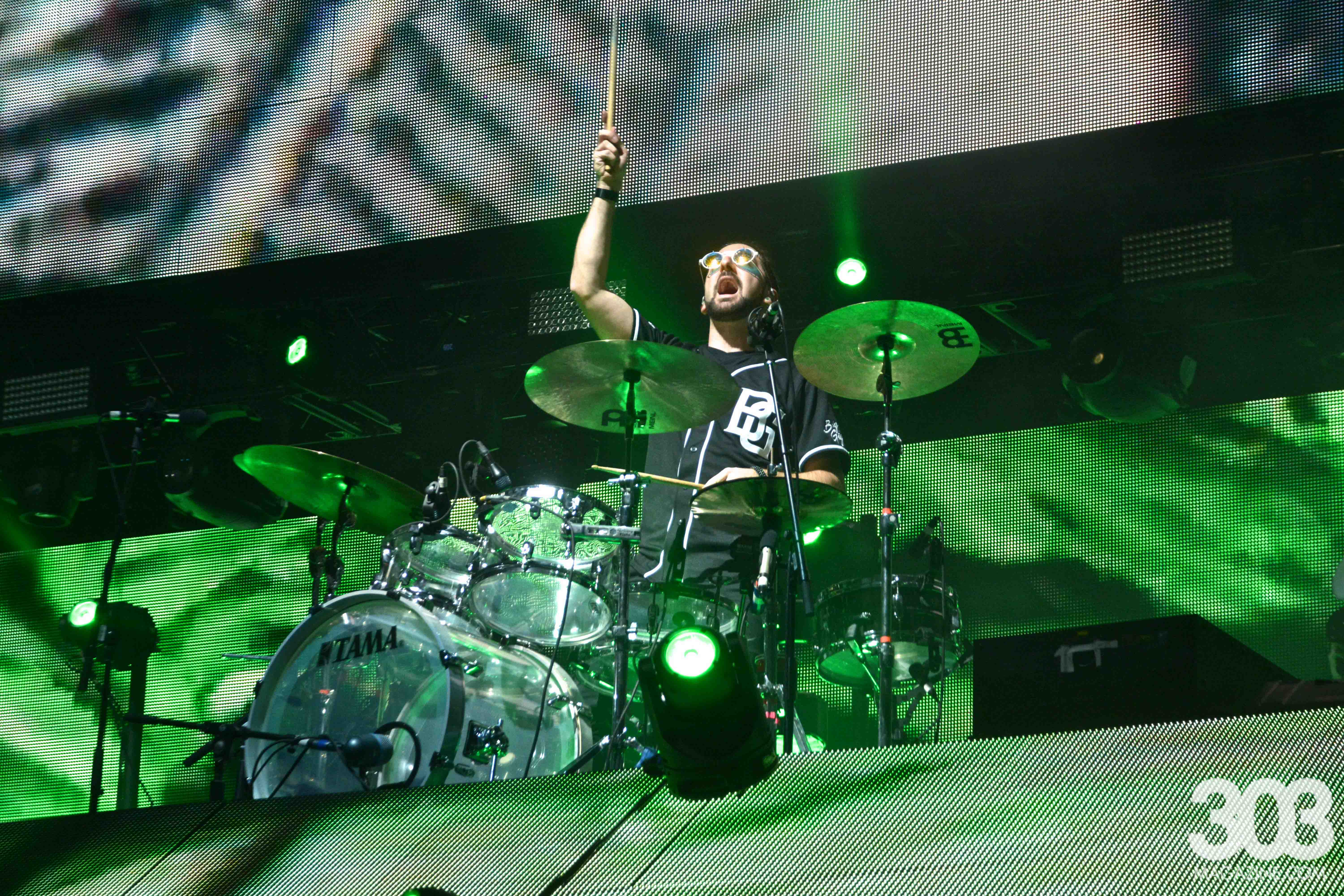 Jeremy Salken at Red Rocks in 2016. Photo by Will Sheehan

It is important to note that DJ sets and full performances are often quite different — we have been let down by small pop-up sets before. As soon as we walked up the stairs into This Song Is Sick’s office space and saw what we would be dealing with, it was obvious that Big Gigantic’s evening rooftop set would not disappoint. Instead of the grand entrance that one might expect from a duo set to headline two nights at Red Rocks for their seventh time, Dominic Lalli of Big Gigantic walked in front of me on his way to where they had their setup and they just started playing.

In the corner, drummer Jeremy Salken had a small drum set, often referred to as his “Cocktail set.” While Lalli did not have his sax they still brought plenty of energy. From our vantage point, it was obvious that they enjoyed the evening almost as much as we did.

They started with some of their own stuff, hitting a few of their more popular songs early. They then jumped into a series of remixes that flowed from one to the next and back again keeping the crowd jazzed the whole time. It was pretty much all music with Lalli coming on the mic occasionally to comment on the beautiful sunset or ask a crowd member to pass him a beer. Soon before their end time, Lalli announced that they would play something new for us. As expected the new song was something special and had everybody enjoying every last second of the set.

Lalli made it clear that they had a blast and commented on how stoked they are for Red Rocks. Due to how close we were, it was obvious that he was being sincere. He and Salken stepped around their setups and everyone began mingling. Things settled back into something like a hyped-up cocktail party. Everybody got to hang out and meet Lalli and Salken in a very relaxed setting. Overall, the first edition of “The Sauce” was a huge success and an impressive event. Everybody should keep an eye out for who will take over the office’s rooftop next.

For more information on This Song Is Sick and “The Sauce” check out their website. For information and tickets for Big Gigantic’s Red Rocks show click here.