Review – Did Leon Bridges Live Up to the Hype of His First Red Rocks Show?

The reputation of Red Rocks Amphitheatre precedes itself. Artists from around the world dream of playing that venue and yet not all are worthy of it. The stage merits a commanding and memorable performance — anything less isn’t deserving of the crowd that is in attendance. So an artist with the reputation and caliber like that of Leon Bridges has a specific hype surrounding the show and an investment to see if he can rise to the challenge. And rise he did. 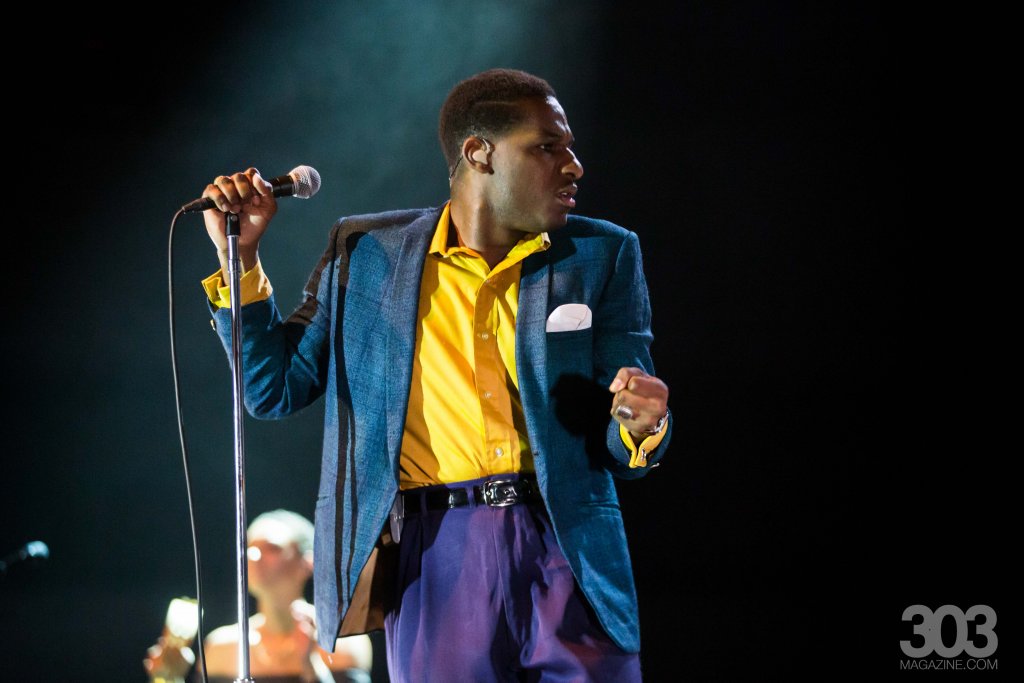 Bridges’ “Good Thing Tour” made a stop at Red Rocks Amphitheatre on August 9 to a sold-out crowd. The night began with the first of two opening acts for the tour. Masego (Micah Davis) began at 7 p.m., playing to a half-filled venue; people were still arriving, getting drinks and finding seats. Not much attention was given to Masego — at first. The self-taught trap-house jazz artist soon began to draw a crowd as he showed off his wide arrange of musical skills, switching back and forth frequently between his saxophone, piano and creating beats on the spot, all while singing in his sultry and slow voice. His music blended the sounds of jazz and R&B throughout the choruses with some deeper bass sprinkled in the verses. If hip-hop met jazz and had a love affair, Masego would be the musical lovechild.

Masego’s sound matched the vibe of the night — a throwback to music with soul, funk and a whole lot of percussion. He compared the resulting sound to a glass of water. “This right here is a drinkable song,” he cooed, referring to his song “Tadow” which has over 27 million listens on Spotify. And he wasn’t wrong. His sound was smooth as water that left us all thirsty and wanting more.

While Masego lifted the crowd and earned their attention, the second opening act fell short. The classical-soul trio Khruangbin began their set with potential, only to have a slow let down as the night went on. The band walked out on stage at exactly 8 p.m., the female bass player, Laura Lee, had a rainbow-colored one-piece suit on while the male electric six-string guitar player, Mark Speer, wore a long-hair black wig. They came out strong, stood at their respective mic stands and then remained there for the rest of their show. Speer said into the mic, “I’m kind of at a loss for words, this is such a magical place.” It sounded sincere at first — and it most likely was — but as time went on, it also felt like a cop-out so they wouldn’t have to interact with the crowd. The collection of people’s conversations during their set almost became louder than the music itself. After the vibe of Masego, their music felt like an immediate ambiance killer, making the audience that much more ready for Bridges to come on. 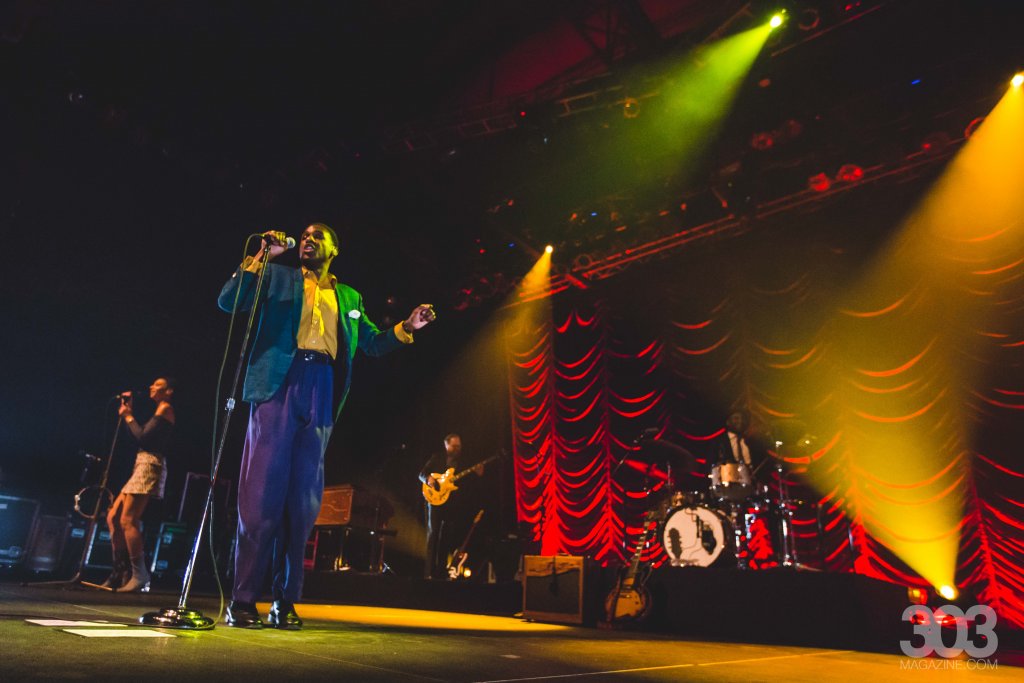 Bridges came on at 9:26 p.m. to a crowd already on their feet. He immediately launched into one of his new songs, “Georgia to Texas,” off his most recent album, A Good Thing. This was his first time performing at Red Rocks — something he commented on later in the night. “It’s an honor to be here for the first time tonight and we just want to give you a good show.” And it turned out not just to be a good show but exceeded all expectations. Opening the show with a slow ballad may have been a tactical move on Bridges part, allowing his voice to fill up the amphitheater and take advantage for all it’s worth before the night really took off. He then went straight into “Smooth Sailing,” his horns and percussion section picking up and two background vocalists coming alive. He was just warming up.

Bridges’ first comment of the night was a greeting to us all — “What’s up, my loves,” he wooed. And the next hour-and-a-half felt just like that — love songs about us and just for us. Bridges covered a mix of both old and new, playing his classics “Coming Home” and “Better Man” off his debut album, Coming Home. He then mixed in new songs, including his love ballad “Beyond,” “Mrs.” and his dance-worthy, feel-good song, “You Don’t Know.” During his rendition of “Coming Home,” Bridges held the mic to the audience at the chorus, allowing for the whole crowd to sing along to. And they did so impeccably. Every word was sung loud and clear, with Bridges commenting “Well that’s beautiful.” Singing at Red Rocks for the first time, it was like his style of music was why Red Rocks was a music venue. The sound of the horns and the bass guitar with the two six-string electric guitars, paired with his smooth-as-silk voice reverberating off the rocks felt like this was destiny. He was meant to perform here. 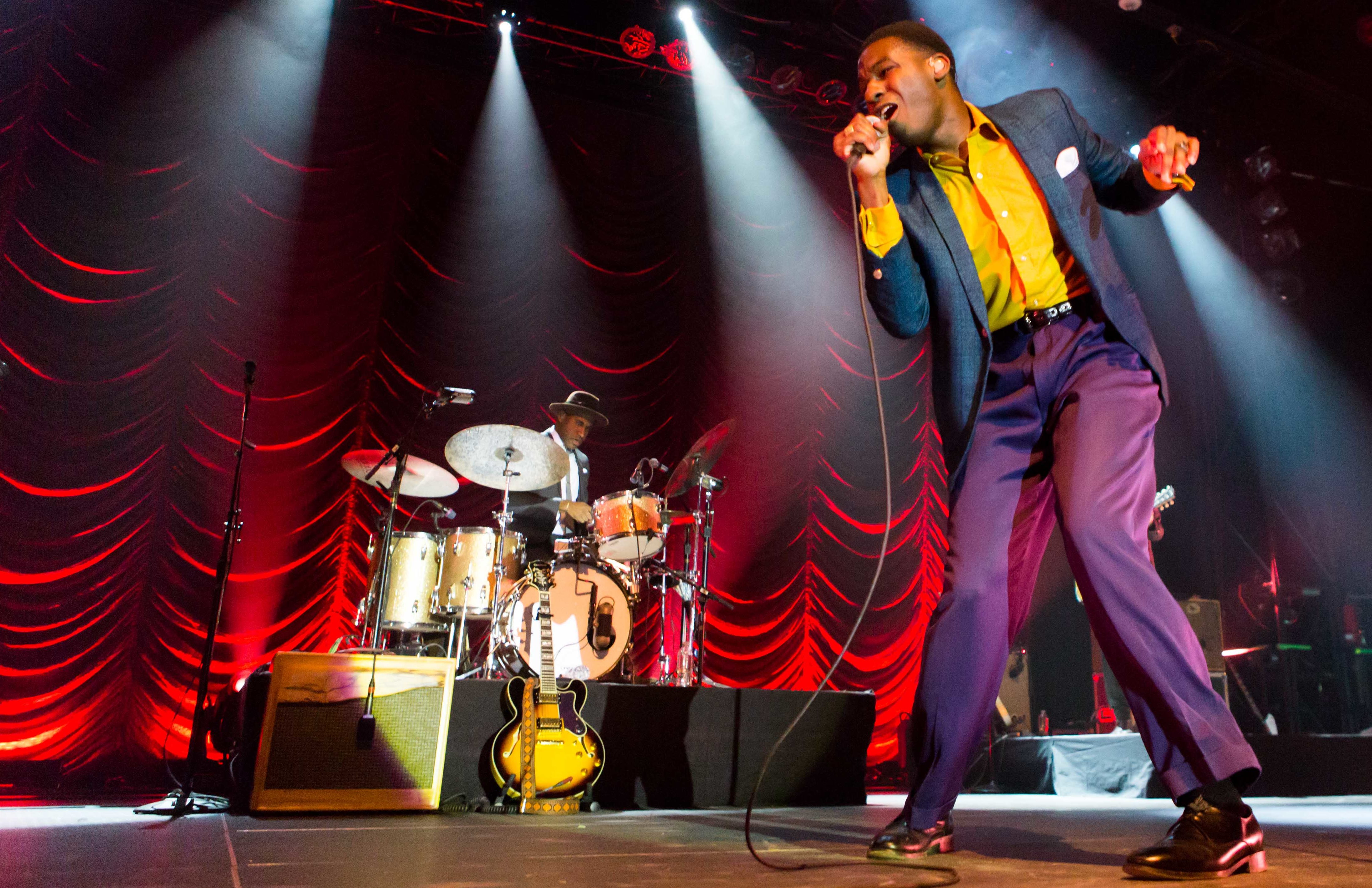 Bridges’ concert felt less like a professional musical performance and more like a party in his living room. This stage was his home and he wanted everyone in attendance to be his guests, extending the invite and making everyone feel welcomed. Watching Bridge dance around the stage, one couldn’t help but want to get up there and dance with him. Simply put — he had fun. Much like his music, he was in no rush. He wanted this party to build and last all night. He was “Twistin’ and Groovin'” all over the stage that night; there wasn’t one inch of that stage was left untouched by his feet.

It wasn’t until his encore that he sang his most famous and well-known song, “River.” And he saved the best for last. Bridges walked back onto stage with only his guitar and his female backup vocalist and together, the two of them sang a love song meant for the ages. It was on that stage — spotlight on him with guitar in hand — that you felt it. Everyone in attendance felt what Bridges probably knew all along — this night was made for him. These rocks were meant to carry his voice. Hearing him serenade Red Rocks that night felt like he was finally coming home.