The String Cheese Incident ended their summer tour after a week-long run in their home state of Colorado. The band started at the Ride Festival in Telluride on July 14 and 15, then headed northeast to Dillon for two nights at Dillon Amphitheater on July 17 and 18 and ended their summer tour with three nights at Red Rocks Amphitheatre from July 20 to 22. For a band that’s been on the road for decades, this isn’t anything out of the ordinary. However, the unshakeable energy from both the band members and the crowd that’s a staple at every Cheese show proves that this Boulder, Colorado group is far from your average jam band.

Looking around the crowd, you wouldn’t guess that the mismatched group of young hippies, old heads and starry-eyed children would party harder than a group of hormone-filled teenagers and 20-somethings, but Sunday night proved that there’s no one that rages like a group of Cheese heads on the last night of the summer tour. With no clear start or stop to the week-long party, Cheese heads gathered in the lot early Sunday morning to get the most out of the last show of summer.

The lot scene is a critical part of any String Cheese show and a can’t miss pre-party. Barefoot kiddos ran between the lawn chairs of old heads cooking up a pre-show snack while party-goers of all ages crush Colorado brews and pass some locally grown herb between new and old friends alike. Talk between fans revolved around the previous Colorado shows, debating which set was best, what songs they played at Dillon at The Ride Festival and guesses as to what they will bring for the last night on tour.

Towards the end of the afternoon, light rain tickled the pink shoulders of those who had been there all day and provided a bit of relief from the relentless summer sun. Clouds scattered over the amber rocks and brought about questions of stronger showers, but showed no sign of the weather slowing anyone down. As the sun began to move behind the rocks, fans started to shuffle towards the entrance to catch Southern sister group, Rising Appalachia. 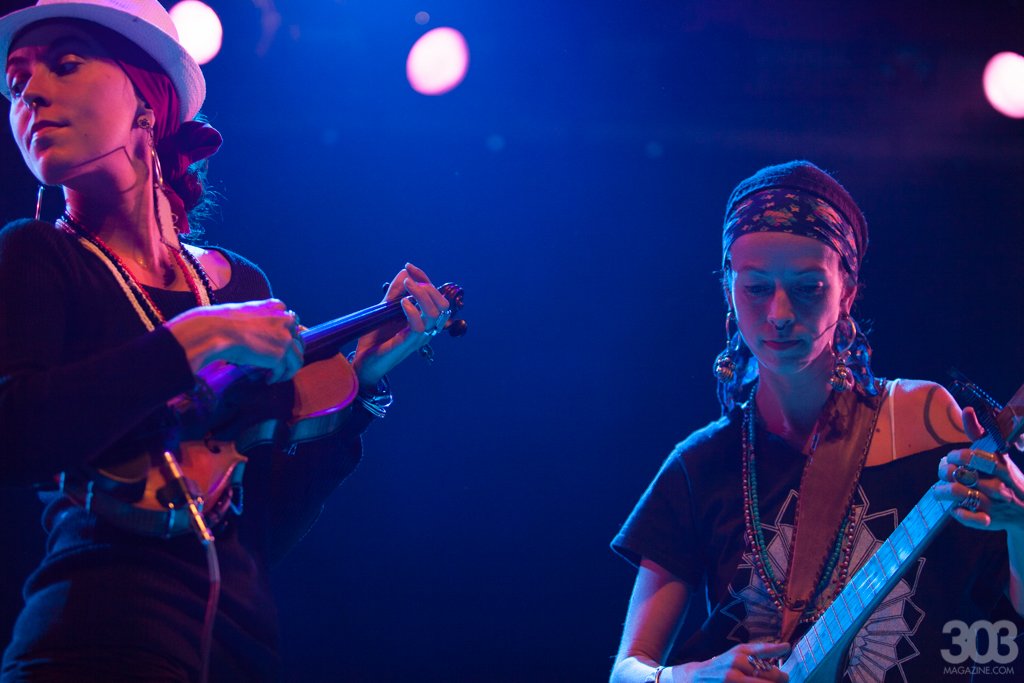 Rising Appalachia at The Ogden 2016. Photo by Jackie Collins.

The singing sister duo and supporting band members cleansed our souls with a powerful vocal performance and comforting assurance that felt like a Sunday church service that you actually wanted to attend. Rising Appalachia was the perfect choice for a Sunday opener and a refreshing reset for the heart that put everyone on the same joyful vibe before String Cheese.

As String Cheese Incident took the stage, not a single person remained seated. With a loud and powerful roar from the crowd, the band kicked things off with “The Hobo Song” and a welcome message from Keith Moseley. Fans of all ages danced like future of Red Rocks depended on it. Grandparents, children and everyone in between stomped around the stands which created a colorful wave of ecstatic dance that put any DJ show to shame. String Cheese is damn good at getting a crowd to move, and the energy only grew from there. 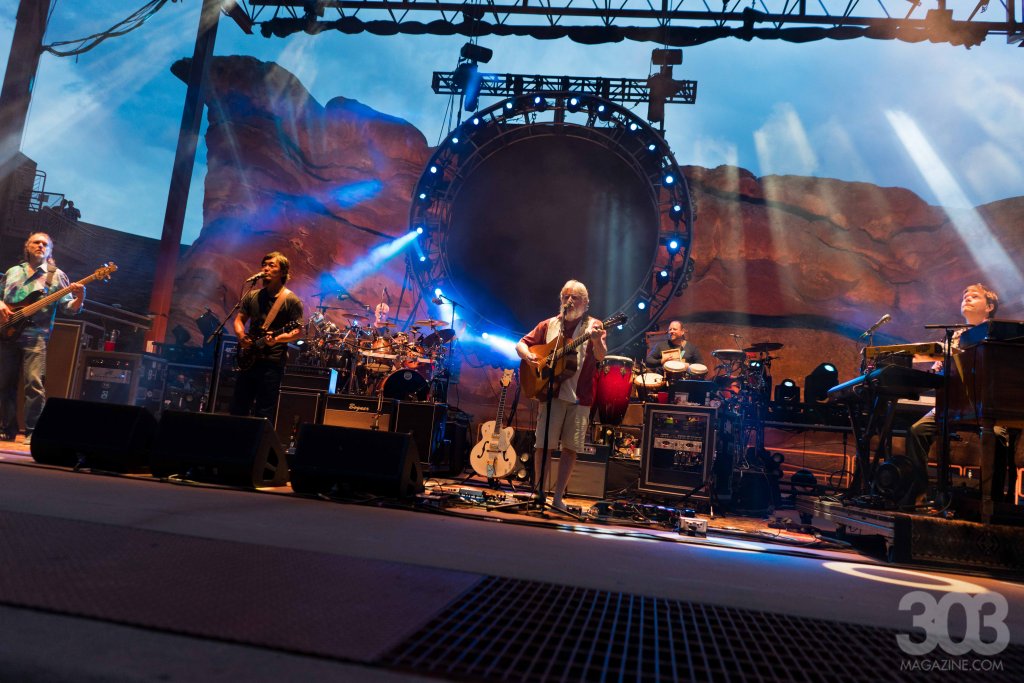 As the aptly-timed “Restless Wind” began, the scattered showers picked up for an electrifying jolt that only added fuel to the fire of the crowd and band. String Cheese picked up the pace, matching the relentlessly increasing rain. While the energy of the crowd never wavered, the band had to stop the show as the showers transformed into a downpour. Attendees scattered under the trees and into the museum and shared nervous glances as the rain flooded the rocks. True to Cheese fan nature, however, the party didn’t stop. Couples swing danced under the downpour while hippies who had been on tour indefinitely praised the much-needed shower. The rains only brought the crowd closer and the camaraderie between fans during the nearly hour-long break was a highlight of the evening.

With a “back-on” time of 8:15 p.m., there was still plenty of time to keep the party going. The heavy showers held off for the remainder of the show — largely thanks to the collective “no-rain” dance performed by wishful attendees. 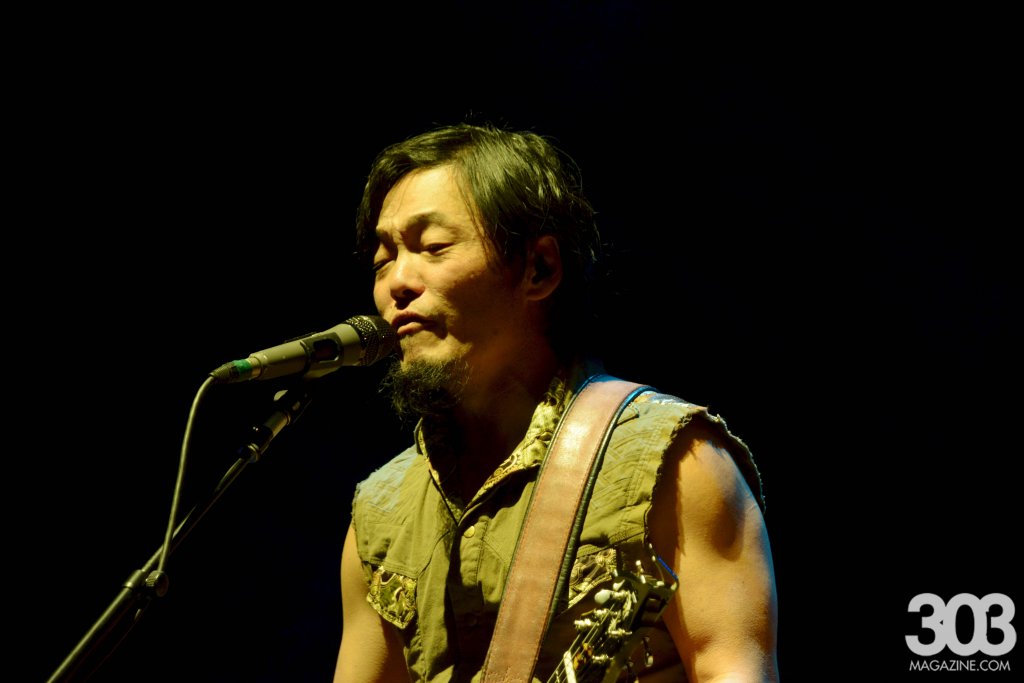 String Cheese returned to the stage with even more vigor than before, assuring the crowd that nothing could stop the show. Cheese played the second set with the appropriate “100 Year Flood” and crowd favorite “My One and Only” before ending the set with a good old-fashioned get down of “Valley of the Jig.” For the encore, String Cheese created a super-jam comprised of Bonnie Paine of Elephant Revival, members of Rising Appalachia and Jillian Nershi, Billy’s wife and musician in her own right. The super-jam played the 1929 gospel “I’ll Fly Away,” which inspired the audience to join in song for the closing Sunday service. The newly inducted members of the Church of Cheese glowed with glory after the show, scattering off to spread the gospel far and wide until the next Cheese gathering.

Cheese heads proved this weekend that when the going gets tough, the tough put on a smile and dance in the rain. Nothing can stop String Cheese or its fans from having a good time. They came here to party and that’s exactly what they did. Up-and-coming DJs and bands — if you want every single person in the crowd giving 110% for the entire show — take notes.