Review – moe. Returned to Red Rocks After Hiatus But Didn’t Miss a Beat

I’ve seen more live moe. than any other band. For me, they’re nostalgic. Songs like “Rebubula,” “Kyle’s Song,” “Buster, “Captain American” and “Akimbo” remind me of the good ole’ days of my early twenties, often barefooted and constantly caravanning from one music festival to the next with my Buick Century packed to the brim with feathered wigs and hula hoops. It started in high school during my Phish years, when I first discovered moe. They shared a few beloved jam band characteristics, but they were somehow different. They were rock stars.

Baltimore’s Pigeons Playing Ping Pong opened for moe., making their explosive debut at Red Rocks. The guys from moe. went so far as to proclaim they see a “bright future” for the young psychedelic funk group, a statement met with roaring cheers from the audience. 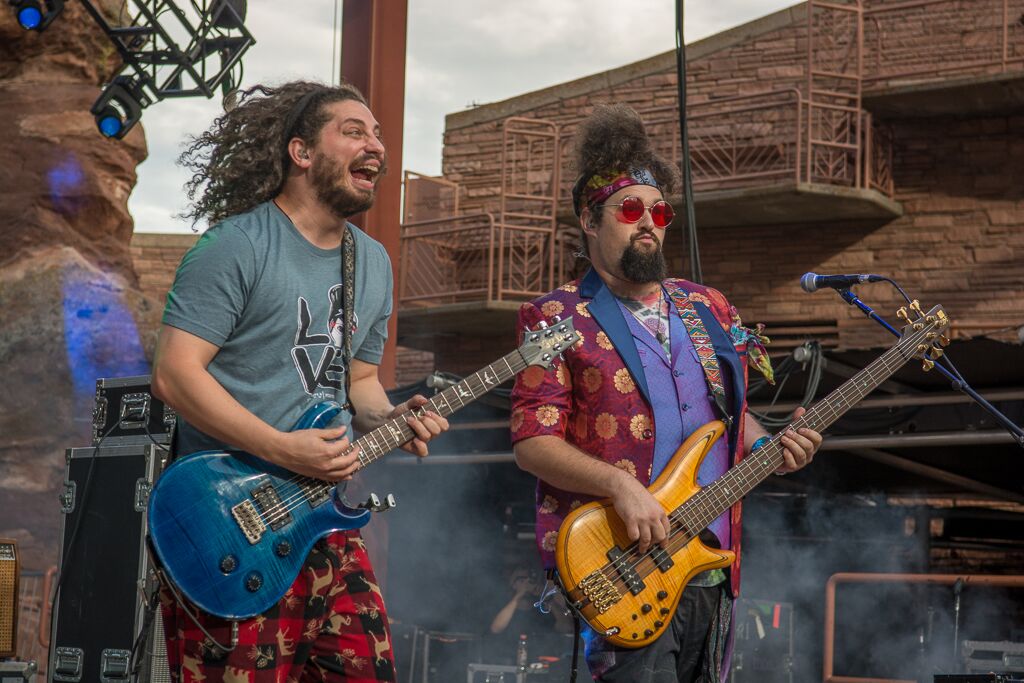 Moe. plays hard with tight with intentional improvised jams between their lyrics. Songs range from blues ballads, reminiscent of Tedeschi Trucks Band or Allman Brothers to hard-hitting tracks in the vein of Jimi Hendrix or Jack White to fun and whimsical stuff that sounds straight out of a 1960’s spy movie or spaghetti western. They’ve got their catchy sing-along songs, their head-banging metal-inspired tracks, their trippy dippy, soft-psychedelic riffs and tangents and their high energy power jams.

Moe.’s music really runs the gamut — and that’s the beauty of it. Yes, moe. draws fans from both the jam band and bluegrass scenes but also appeals to diehard Primus and Ween enthusiasts. Even if you detest jam bands, you’ll probably still find moe.’s music palatable, if not downright awesome. As they say in Colorado, if you don’t like the weather, wait fifteen minutes. If you don’t like one of moe’s songs — wait fifteen minutes and you’ll be transported to another genre entirely. 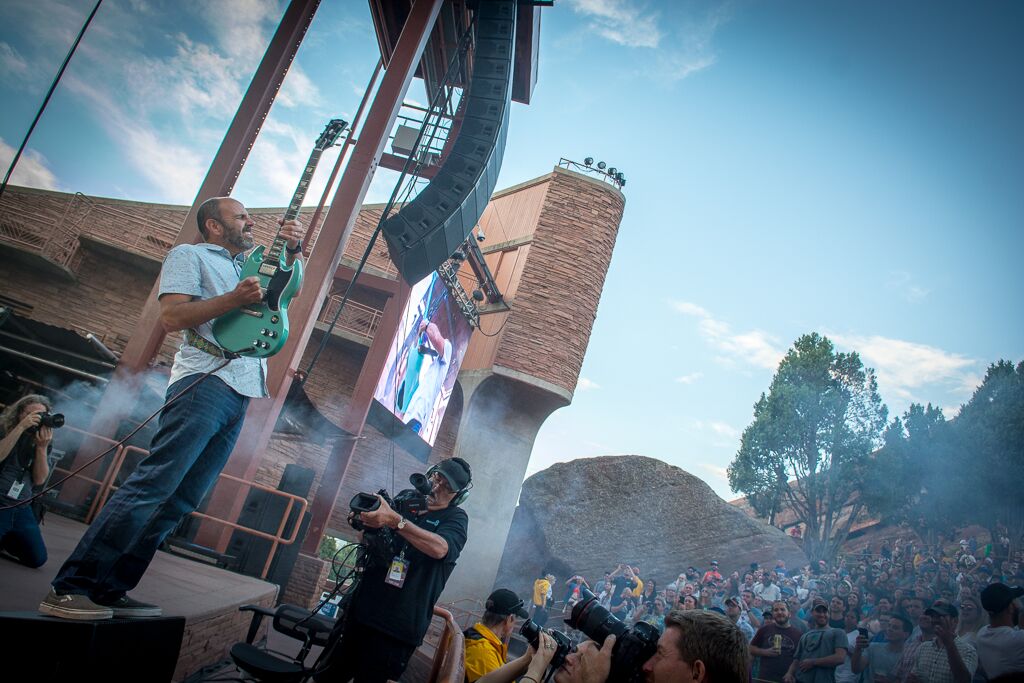 On top of the band’s genre-busting talent, these guys have been touring and playing together for so long that it seems every move, beat and note are so meticulously timed out and placed and each band member’s ability to recognize what’s coming next and where each dramatic pause and drop is going to be is uncanny. Moe. was excellent seventeen years ago and they’ve only gotten better with time.

The quirky band from Buffalo with the lowercase spelling and punctuation at the end has woven such a legacy for themselves. They’ve been playing together since 1989 and dropped their first album (Fat Boy) in 1992, so their fanbase — self-proclaimed “moe.rons” — literally spans generations, which generates a real family vibe at their shows.

This Red Rocks show was especially significant for moe. because they had to cancel last year’s date, along with the rest of their scheduled summer/fall tour, due to bassist Rob Derhak’s bout with throat cancer. The band had declared an indefinite hiatus at the time of Derhak’s diagnosis last July, but then returned to the stage in February of this year to celebrate Derhak’s triumph over the disease. At the end of the evening last night, Derhak humbly took to the mic, encouraging fans to “keep the dream alive.” Without him having to give any further details, we knew what he meant. 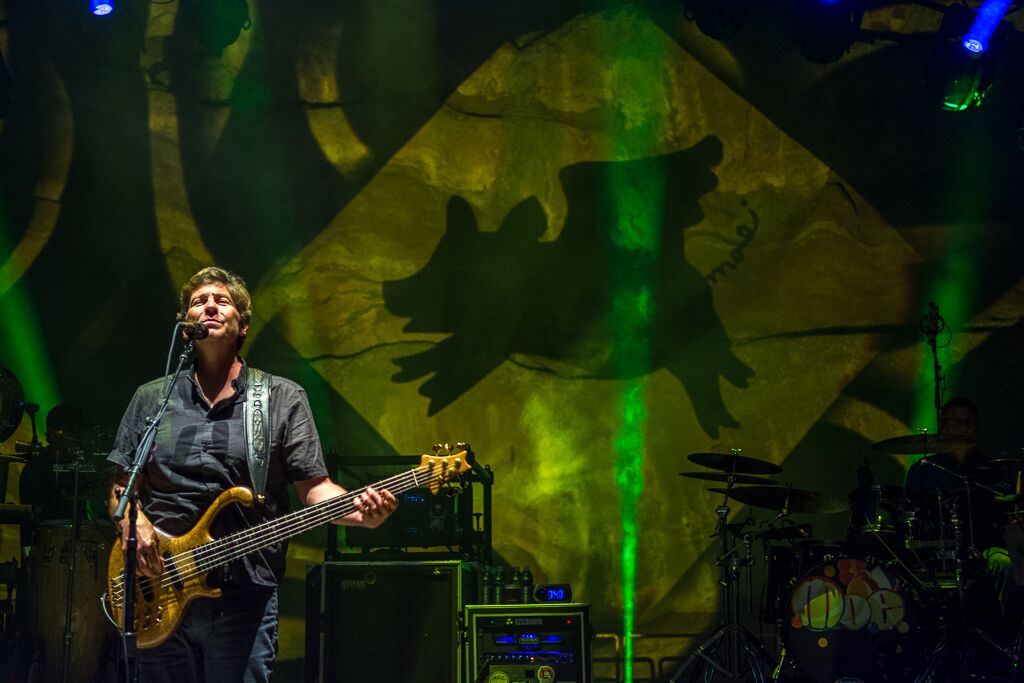 After two long and winding sets, once the blazing summer temperatures finally simmered down, moe. once again turned up the heat by bringing onstage a few of the boys from Pigeons Playing Ping Pong for a fantastically weird rendition of David Bowie’s “Fame,” as sung by Pigeon’s whacky and charismatic frontman “Scrambled” Greg Ormont.

To me, moe. feels like eating your favorite childhood food that you’ve forgotten about because you haven’t tasted it in a decade. And then when you have a bite, your senses are flooded with sensations from the past and you can appreciate the flavors even more than ever. Moe. is like running into your high school best friend’s parents from New Jersey at Red Rocks — which is precisely what happened to me at last night’s show. To me, moe. is a special band. And when they rock out to “Plane Crash” like they did last night, hearing everyone in the crowd go wild and scream along to all of the lyrics — who doesn’t like to yell “too fuckin’ high…!” at the top of their lungs, while arguably in that very mind state? — I get the warm fuzzies knowing that moe. is a special band for all of those people, too.