Trampled by Turtles grabbed the bluegrass world by the strings 15 years ago and — other than a four-year hiatus — has not let up since. Their recent release, Life is Good on the Open Road, whisks their fans back to their thrash-styling of a traditionally slow-paced and soothing genre.

The group is bringing their new tracks to Red Rocks on July 19 and Colorado is ready as ever to jam Trampled By Turtles tunes once more. We got with Erik Berry, the band’s mandolin player, to find out how the hiatus shaped their return and what is yet to come from them after a decade and a half.

303 Magazine: How has life on the open road been since Life is Good on the Open Road tour started?

Erik Berry: Good, things are going really well. We took a long break before this and everyone missed it. Everyone is really listening to each other.

EB: For myself, there is a routine. I like to play, I look forward to it. It is the modest stuff, like playing disc golf and traveling that makes it easier.

303: How was the creation for Life is good on the Open Road different than your other albums?

EB: It wasn’t dramatically different. Almost every Trampled By Turtles album is created by us getting there, working up some songs, and usually, Dave [Simonett] feels inspired to bring one that wasn’t finished to the table. I think he had a handful that were more like that this time around.

What is really neat about it is, we were at Pachyderm Recording Studio in Cannon Falls, Minnesota, where they have a house on-site. We were living there, eating there, working there, going for walks in the woods there. We settled into this nice routine of going down at about noon and working until three, going back at four and working until about eight. That was a pretty good clip, and we were basically working on about two songs a day.

The whole point of that record was trying really hard not to have too many overdubs. Every night we would have a listening party and listen to what we had so far in the sequence Dave was imagining it, and it was just like, “yeah, this is good. I’m excited and happy.” It was a chilled out, focused experience. 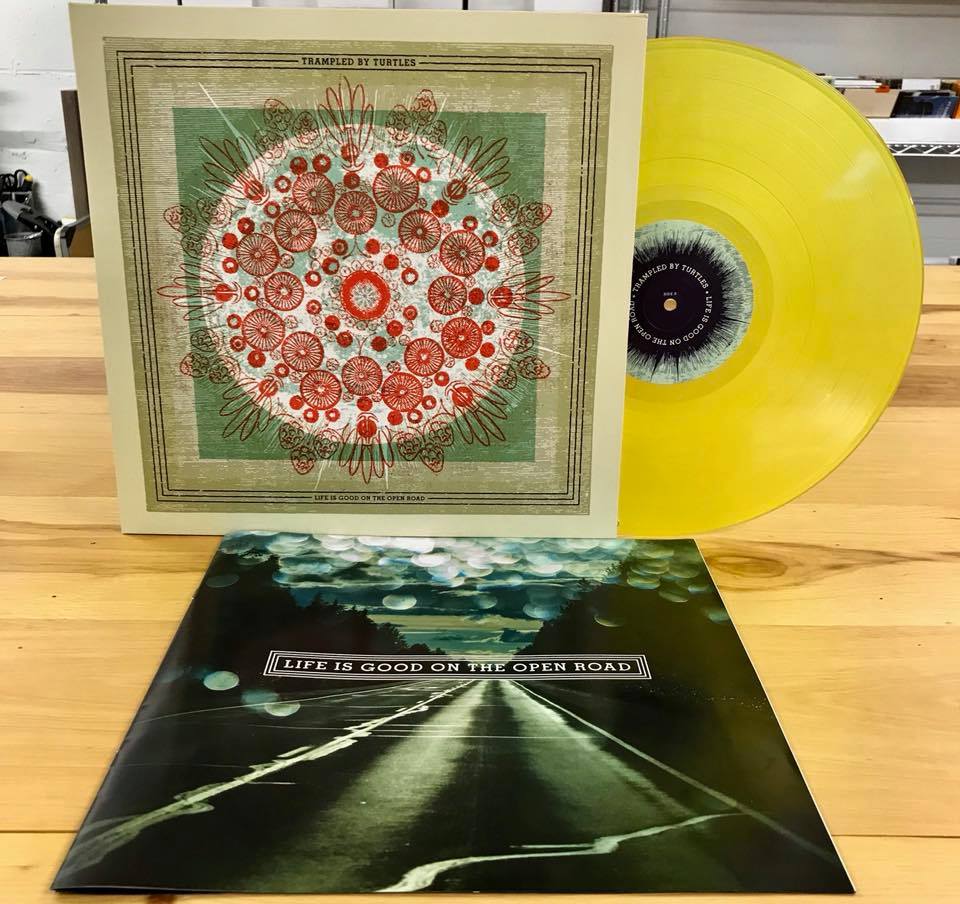 303: Life is Good on the Open Road came from you guys after a bit of a hiatus from Trampled By Turtles. In what way do you feel that the hiatus was beneficial to where the band is today?

EB: Well certainly, like anything else, if you take a break from something when you come back to it, you’re fresh. Then there’s that almost all of us — wait, I take that back — all of us played with different musicians during that time. That impacts you, too. Some of the guys I was playing with think differently about introductions and outros of songs. Which is definitely stuff I brought to the table this time around.

There is a way that we play together that can’t be faked or done with anyone else, so there was that happening as well.

303: How do you manage jumping back into the tour life after a break?

EB: Well, I’ll tell you, the last two weeks before I left was stressful. Without realizing it, I had a whole bunch of solo stuff booked the last couple of weeks. I have children and my children’s lives are getting busy too. It was different because I did settle into a pattern of being home.

303: Colorado is a big hub for bluegrass fans, and I know Dave lives in Steamboat. Do you feel like you get a lot of support out here?

EB: Yeah. Colorado was the first place that we road tripped out to. There was a little bit there in the year 2008 or 2009 that we figured out we had played in Colorado more than we had played in Wisconsin. It’s a doable drive. Unbeknownst to us, even now you can play multiple shows in that state because of the way the mountains and the roads are. The way the roads are in Colorado, people will just drive to see all the shows. There are people that remember seeing us Colorado in the year 2004. It’s been good for us, that’s for sure.

303: Do you have a favorite venue or memory from Colorado?

EB: Oh, it’s Red Rocks. [Laughs] Oh, for sure. Red Rocks is the reigning king of that question, but we got to play the Mishawaka, and that is a really special place, too. We’ve had a lot of fun shows in Colorado.

303: Playing the mandolin must be difficult enough on its own, but Trampled’s music is at a much faster tempo than most. Do you have a strategy for holding that pace or does that sort of beast-mode come naturally?

EB: Well, yes and yes. There is some technique that makes it easier and that I focus on, like my breathing and keeping my muscles relaxed and all that. But, there is also something that happens that I can’t control, and that is the six of us playing together. It is really hard to practice that music without the other guys. It can be done, but it’s hard.

We’re all getting older, backstage it looks like a bunch of monks and yogis hanging out stretching out their hands and arms. It can hurt.

303: Fifteen years into this band, what do you think is the future of Trampled by Turtles?

EB: Oh, I’ve never been good at picking that, so I’m not going to.

303: What track are you most excited to play at Red Rocks?

EB: Well, selfishly I am most excited to play my composition, “Good Land” off of the record. I think a lot of those tunes, it’s just going to be fun there.

This interview has been condensed and edited. Tickets for the Red Rocks performance can be found here.