If you care to be transported to a time long ago, when courageous knights rode lance-first toward foes to honor the King and Queen and jesters danced through marketplaces filled with bustling vendors and performers, it’s not too late to visit the Colorado Renaissance Festival in Larkspur. The annual event hosts traveling performers from mid-June to early-August, and each weekend presents a positively overwhelming array of costumes, games and shows to entertain and entice the crowd of thousands. Whether you’re a skeptical civilian or a weekend LARPer ready to don your chain mail and leather sheaths for all to behold, the Renaissance Festival is certain to dazzle your disposition with its sheer diversity of moments and otherworldly immersion. Though the Renaissance Festival is undoubtedly subjective in its impact, here are 10 weird and wonderful elements of this year’s festival that made it such a spectacle to behold.

A beige statue of a beautiful woman stands on a pedestal in the midst of a ringed pool. A well-dressed man in a top hat informs the crowd that at particular moments of the day, when specific music is played, the statue comes to life. From unseen speakers, gentle music trickles into awareness, and as a female voice sings mystical melodies of varying languages, the statue begins to move. With a gaze mysterious as Mona Lisa, she moves in place to the music, seemingly unaware of the amazed crowd surrounding. With no effort displayed, she shoots thin streams of water from her fingertips and a shower from her hair, manipulating the water’s motion to cast a dazzling display of ethereal beauty that mesmerizes all who behold it. As soon as it began, the music fades away, and the well-dressed man thanks the applauding crowd for visiting and honoring the Living Fountain.

The greatest part about the costumes is that they change every day, depending on what wild Colorado characters decide to pay the festival a visit. On top of the exuberant get-ups of the paid performers, you’ll witness pirates and princesses, fairies and demons wandering the pathways weaving through stages and vendors. People don elf ears and antlers, witch hats and wings, leather boots and corsets and quivers of arrows. Women wear hoop dresses and gypsy coin belts; men wear leather vests and steel-plated armor. Couples strut the grounds on centaur legs, hobbling on hooves with beers in their human hands. In the end, it becomes nearly impossible to tell who is paid to perform and who simply wanted to go all the way with dressing up, creating total immersion into a time not forgotten, a time so long ago. 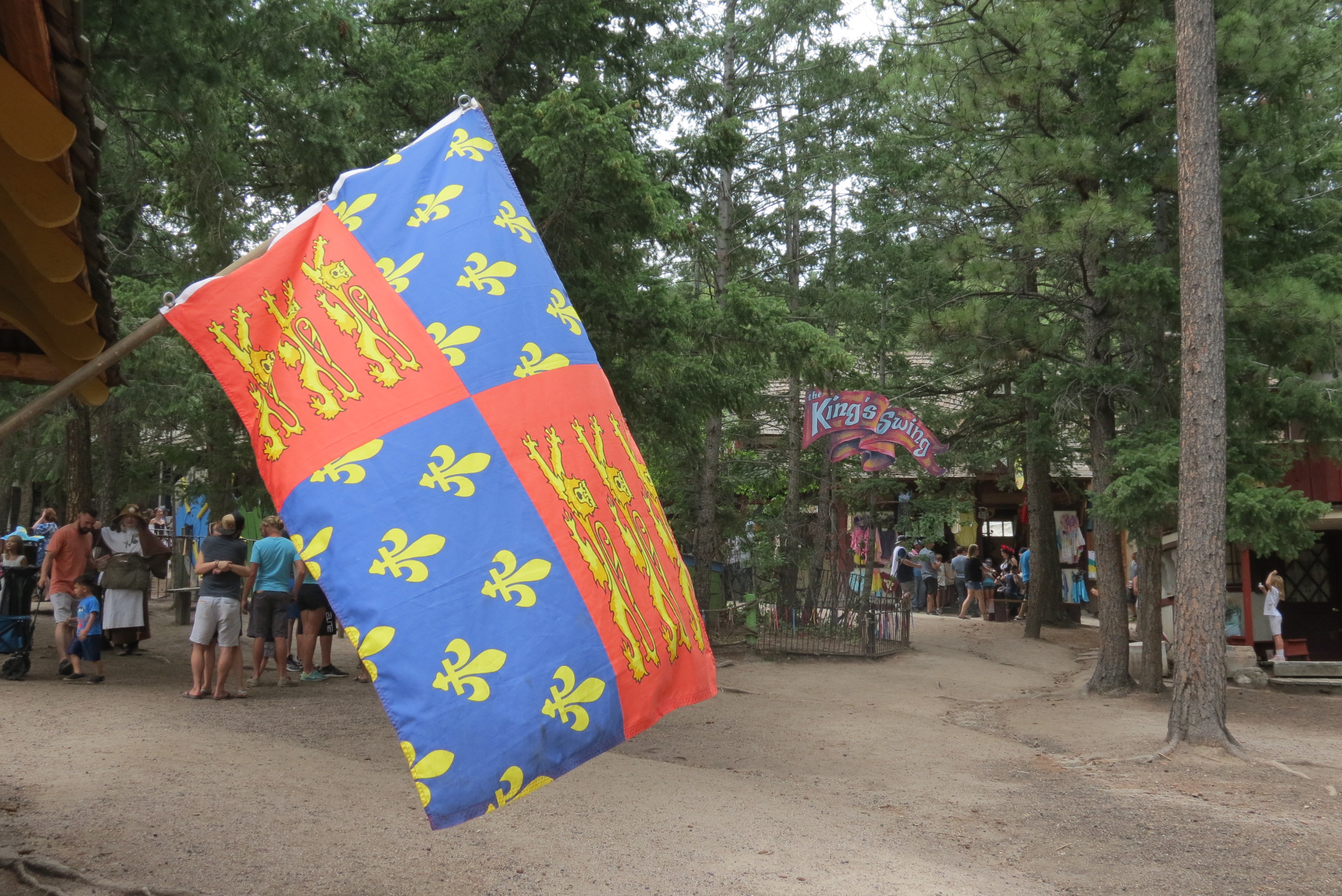 In the midst of the dirt pathways, situated in varying places through the day, a man with warts covering his disgusting face sits on the ground, grumbling at passersby. He is the village idiot, a man who holds a plastic beaver choking a chicken. Rags and soot cover his weary body. He plays a small accordion-like device and cries, “Give me a dollar!” while shaking his tin can. For those who oblige, he leverages a personal insult, such as a dig at a man wearing a Hawaiian shirt for being a man wearing a Hawaiian shirt. Just keep your booze away from him. Clearly he’s had enough.

Care to test your strength? Your aim with ninja stars and throwing knives? Your ability to hit a man in the face with a tomato? The plethora of booths throughout the village will undoubtedly meet your desires. You might play King of the Log, where you sit across from friend or foe on an elevated log and fight to knock each other off. You might test your wits by challenging a monk to a game of chess. Palm and Tarot readers can tell your fortune, and a snide buccaneer can insult you as you try in vain to throw an axe at a wooden wall. Children can ride elephants, camels and wooden horses accelerating down a wire while the rider aims to thrust a lance through a ring. Bring some cash, because you can’t end your day without trying a few.

On the deck of an old pirate ship, two self-described wenches provide absurd entertainment to a large crowd. With hair tied up and teeth missing, they chug random audience members’ beers, sing ridiculous songs and hit one another’s breasts with drumsticks. Once sufficiently inebriated, they call males from the audience to the stage. The wenches proceed to grope and fondle said males, forcing them to engage in ridiculous behaviors in order to win a rose for their loved ones. One lucky guy’s task was to run to the back of the crowd, pull on a pair of big whitey tighties and scream loudly about his “man pants.” The wenches made another fellow chase one of them through the audience while crying, “Myrtle! I love you!” until picking her up to his shoulder and running her back to the stage. Each man had to receive the rose with his mouth from the wench’s mouth as his lover watched on. We can only hope they weren’t the jealous type.

Though not too Renaissancey — at least in any stereotypical sense — the Great Cats World Park bring their magnificent animals to the stage, stunning the crowd and eliciting parades of gasps. The trainers display a bobcat and a lynx, guiding the graceful cats to leap around the stage and display their impressive climbing skills. The most incredible cats, however, are the black panther — a leopard, specifically, the most unpredictable of all big cats — and the White Bengal tiger, extinct in the wild due to its history of being captured and killed for Indian royalty. These cats stalk and leap and climb with such stealth and grace that not even the sharpest sword from the vendors nearby could protect fair-goers from their dominance, should they have the ill fortune to encounter one of these mesmerizing beasts in the wild.

Everywhere you look you’ll find food and beverages indicated by signs in medieval-looking script, from cappuccinos and Steak-on-a-Stake to gyros and the infamous Renaissance turkey legs. Beyond these indulgences, you’ll stumble upon extravagantly-dressed folks selling magic wands, didgeridoos, crazy pirate costumes, leather-bound books, mugs begging to be filled with mead, and a massive variety of medieval weapons ranging from wooden swords for children to full-on metal scythes for the Vikings amongst us. The vendors will sing and call you out as you pass by, referring to you as “lord” or “lady” — make sure to come with an arsenal of witty responses, cause the pressure they’ll put on you will be nearly as strong as it surely was back in those Renaissance markets of yore we all wish we could live out once again.

Wander freely, and you’ll be sure to stumble upon stages filled with pirates slamming heavy sticks into drums, Vikings wearing black face paint shredding electric mandolins, and a half dozen bearded men in kilts playing their aggressive souls out via bagpipes. You’ll see accordions and wind pipes, trumpets and fiddles, and you’ll hear lyrics chronicling ships sinking and maidens betraying, voyages completed and beverages consumed. The kilt guys — the band Celtic Legacy — will even challenge crowd members to drinking contests, chugging pints while their band mates engage in searing bagpipe renditions of such Celtic classics as “Tequila!” and “The Lion Sleeps Tonight.” As entertaining as the diverse music is, however, no act quite reaches the level of the performer known as “Cast In Bronze.”

Though Cast in Bronze falls under the live music category, this man’s act is so fantastic and unique it deserves special recognition. In the minutes preceding the jousting events, a mysterious man in a black cloak and a creepy bird-like mask sits before a monstrous instrument called a “carillon.” It appears somewhat like an organ, yet instead of pipes, each key corresponds to a different-sized bell, ranging from very small to absolutely massive. The entire instrument weighs over four tons. (The largest carillon, the mysterious man informed the crowd, resides in New York City at over 100 tons.) The cloaked man pounds his fists and feet into the keys, creating incredibly immersive melodies, such as a carillon rendition of Carl Orff’s Carmina Burana. The clanging bells shake the earth and cast a foreboding, exciting atmosphere for the upcoming joust, creating a sense of an ancient procession of warriors prepared to fight to the death — which turns out to be what the crowd desires most.

At long last, the main event begins with an announcer’s bellowing cry. Trumpets and drums accompany the dramatic procession of dukes and lords and ladies into the arena, paving entry for the King and Queen. Once the royalty is stationed in their viewing space, the four jousters ride out one by one, raising lances high to a mixture of cheers and boos from the dense crowd of split allegiance. Each declares his prerogative, with the King’s knight crying, “Long live the code of chivalry!” and his enemy calling out for blood and death. “Kill him!” cry men in the crowd as the jousters don their metallic helmets and gaze boldly through horizontal slits. With a thrust of the reins, the horses rush toward each other, and the jousters ride with lances extended and shields raised. A terrific battle ensues, denting shields and obliterating lances into dust. Blood streaks the field as the hero and villain fight toe to toe with swords, until finally the villain is slain. Broken, barely able to stand, the hero cries out on behalf of chivalry in honor of the King and Queen. The announcers dismiss the crowd, proceeding to bury the dead laid strewn about the field, forgotten to the ongoing tides of history. 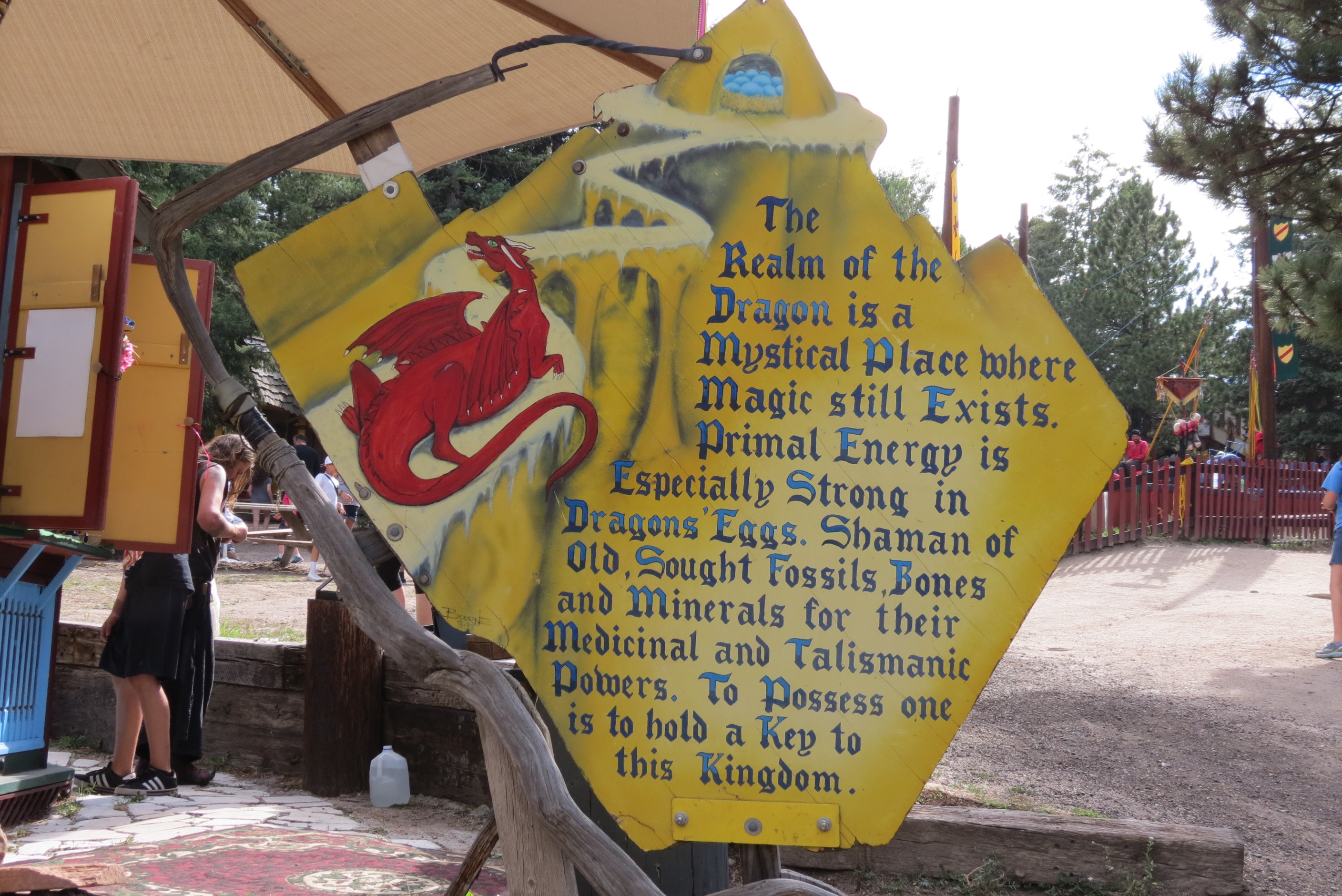 The Colorado Renaissance Festival will continue the next two weekends — July 28-29 and August 4-5 — in Larkspur, from 10 a.m. to 6:30 p.m. Tickets can be purchased on the festival’s website for $22.50 and at the box office for $24. The July weekend will have a “Pirate Invasion!” theme, and the August weekend will be themed around a “Fare Thee Well & Mardi Gras Style Carnivale.” Further information on vendors, entertainment and directions can be found on the festival’s website.

All photography by Sean Lawlor.