Listen to Plants Sing Inside a Downtown Oasis at Understudy

–
The small room wedged between a busy RTD Light Rail and the bustling streets in front of the Convention Center doesn’t seem like the most opportune location to build a sanctuary worthy of meditating. Of course, that small room is Understudy — an art incubator that exhibits different artists every month — and Understudy loves disrupting the norms. 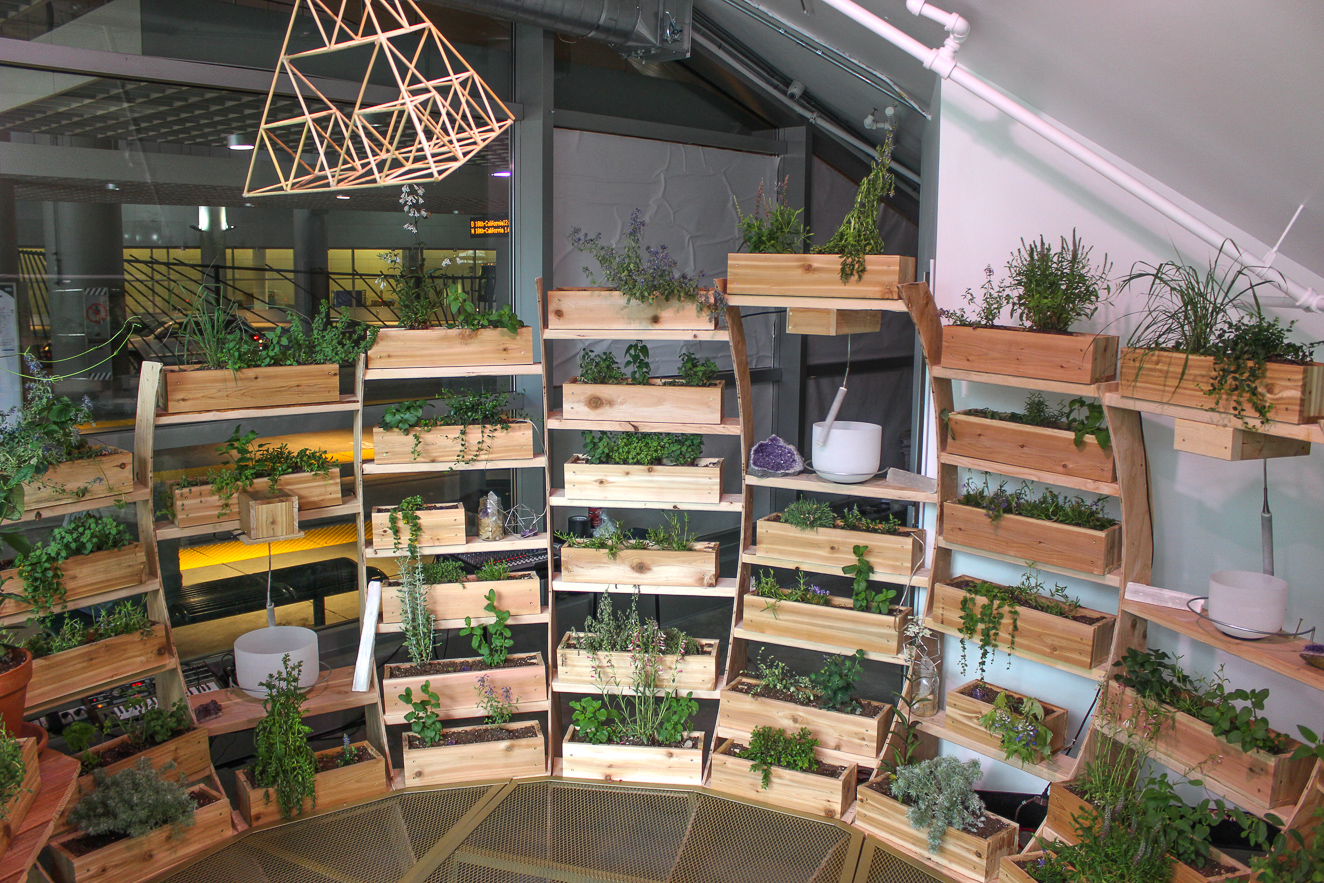 So for the month of June, Understudy allowed Colorado Springs-based artist Matt Barton to remodel the space into an oasis (complete with water and plants) in the middle of a busy spot in Denver. The exhibition is titled Soft Something and is on view until June 29, running in conjunction with the Happy City transformation and curated by Cortney Stell with Black Cube Nomadic Museum. It gives those who walk in an opportunity to relax, say hello to the plants and hear the plants say hello back — well, almost.

What Barton fabricated inside Understudy is certainly an oasis, complete with mostly green plants, running water, fish, amethyst crystals, singing bowls and unfinished wood. But it also represents more than just an atmosphere to relax — it’s a place for conversions. Barton first converted the setting within Understudy, building out a framework with two-by-fours and other pieces of wood. He then installed a fully-functioning aquaponics growing system, where water cycles between plants and a fish pond, creating a feedback loop where the fish filter the water for the plants and vice versa. Altogether, roughly 200 gallons of water was initially cycled into the system, and because it recycles, most of that water is still running through the space.

The next conversion occurs when someone enters Soft Something, closing away the hustle of 14th Street and the Light Rail station and finding themselves immersed in a forest of sounds and vibrations. Humidity greets each visitor (a welcome relief from the Colorado aridity) with the accompanying smell of a garden. Moving from the city sidewalk into this setting is a big transition, including a step over an actual threshold, and our bodies react to it even without us noticing. There’s more oxygen in this room. 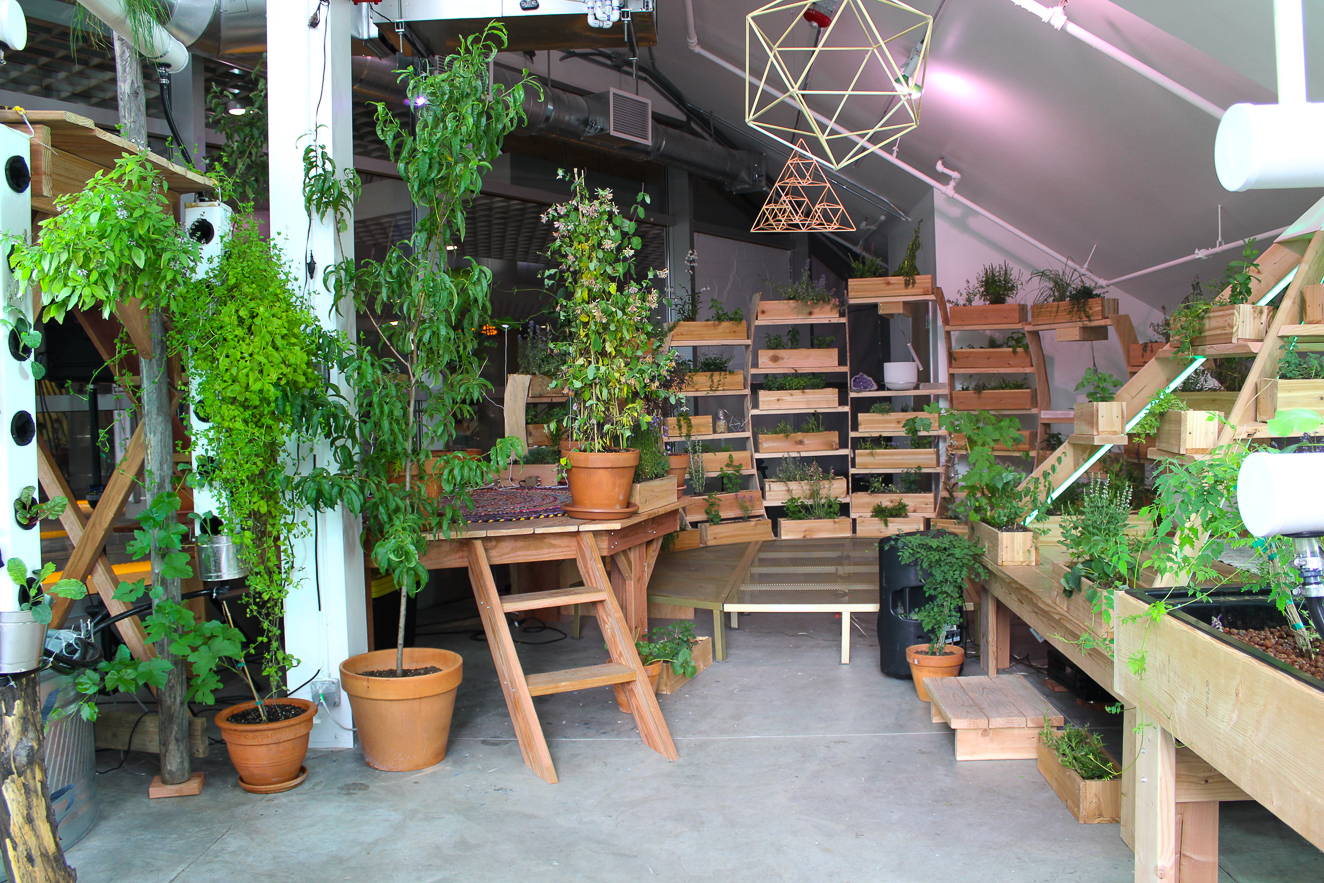 The other conversions are more esoteric — one verging on transcendental and the other verging on scientific. The scientific part comes into play in the previously stated conversions in a more broadly understood manner — that is, aquaponics systems are modeled after functioning ecosystems in nature. Where the science becomes obscure is on one of the platforms, where headphone jacks are labeled with the instruction “place me in the potted soil.”

And so, like Alice in Wonderland, the only thing to do is follow the directions and stick the electric cord into the potted plant directly next to it. What happens next is both haunting and fascinating and, ultimately, a conversion of one form of energy into another. And though the cord trick is part of Barton’s blurring of boundaries (a theme he relies on heavily in this work) the effect brings attention to the plants in the room as more than decoration. 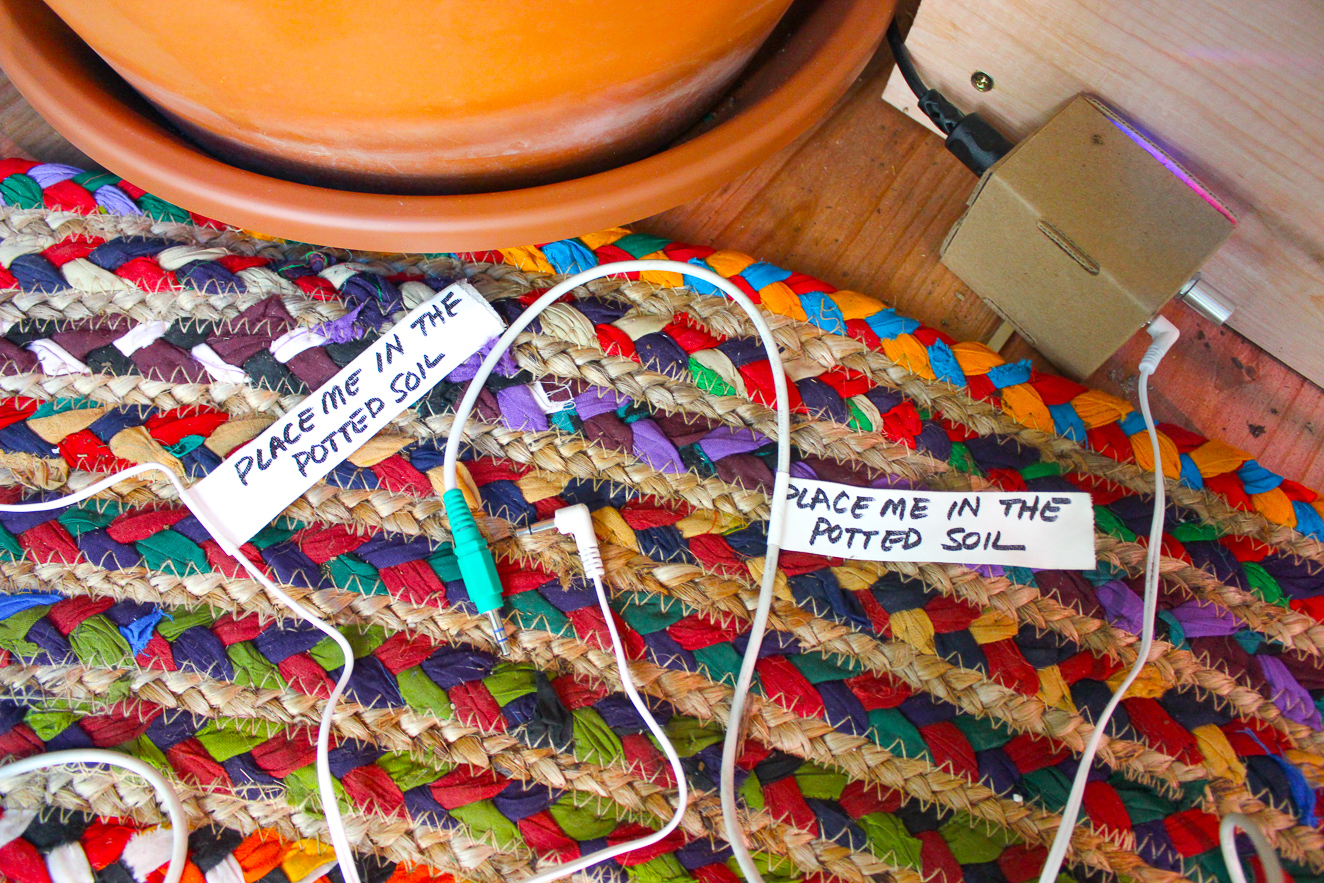 Aside from the interactive plug-ins, the other plants on the platform serve a similar purpose. Barton attached electrode pads to the leaves of those plants, the impulses from those running into two small boxes on the ground, which then converts into synthesizer sounds through the speakers. This is the ambient noise that greets each person who walks through the doors — a vibratory humming that sometimes fluctuates — and it’s emitted by the plants.

“The plants’ electrical currents are translated into a midi signal that modulates sound coming from synthesizers,” Barton clarified. “The plants are generating all the fluctuation in the audio, responding to their environment. When they are touched by the viewers there is a very noticeable change in the sound, as we enter the electrical circuit. I hope this element affects the tone of the rest of the space.”

It is only after grasping the profundity of this exercise that the transcendental conversion takes place. Not only does Soft Something feel like you’ve stepped into a place that welcomes you, it also feels like you’ve entered a place that is not really for you. And Barton seems to leave the participants of this installation in that lull on purpose — wondering if the place is a greenhouse, a science experiment, a meditation studio, someone’s renovated studio apartment or none of the above. 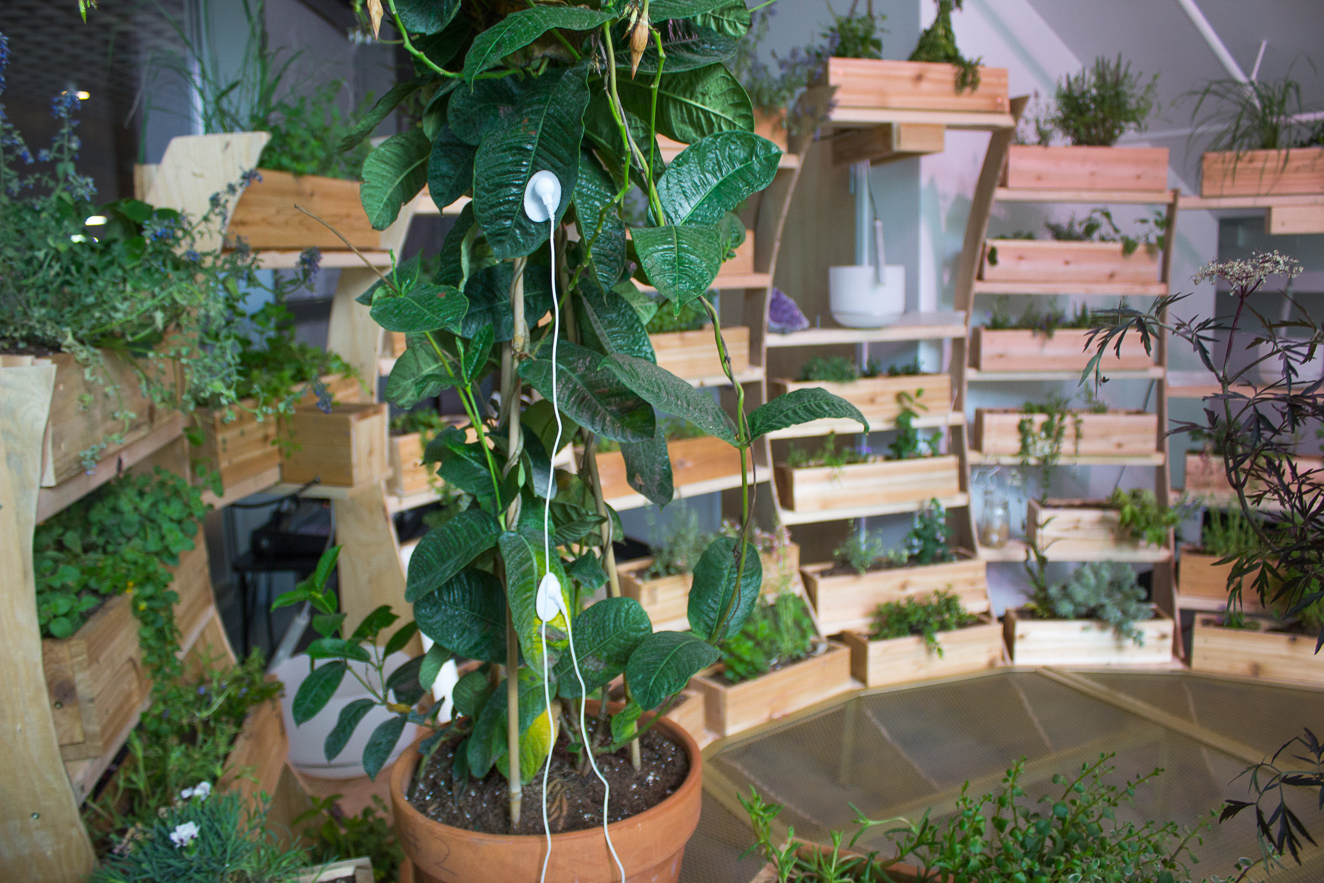 Soft Something, more than it is about biology, ecosystems, metaphysical ideas or construction, is about understanding connections in relation to other connections — for example, finding more power in the singing of the plants if you are already fond of music. In this association game, conversions take place at a rapid-fire pace — memories into realizations, curiosity into knowledge, light-hearted whimsy into deep-rooted questioning. And because these evade consideration until you’ve explored the space in detail and depth, the exhibition requires more time to appreciate. Whether or not Barton knew he would create a space capable of warping time within a busy city, it’s hard to say. But it’s obvious he knew that at least our primal relation to plants would keep us intrigued for longer than your typical painting.

“The main elements of the show; plants, water, light, sound, and sculptural forms referencing the human body, are meant to all allude to ‘soft’ boundaries, shared elements passing through us, and the interconnected nature of all living things,” Barton explained.

At this point, after all the deep considerations, we recommend lying down in the pyramid with the green lights, head on the pillow. Or, if you’d rather not get into a closed-off space, climb onto the platform with the magnets. Either way, immerse yourself among the rows of plants and listen to them talk for a while. Even if you have a sliver (or more) of doubt about how it all works, the point is that you’re curious. And curiosity seems to be the best way to change an established mindset. 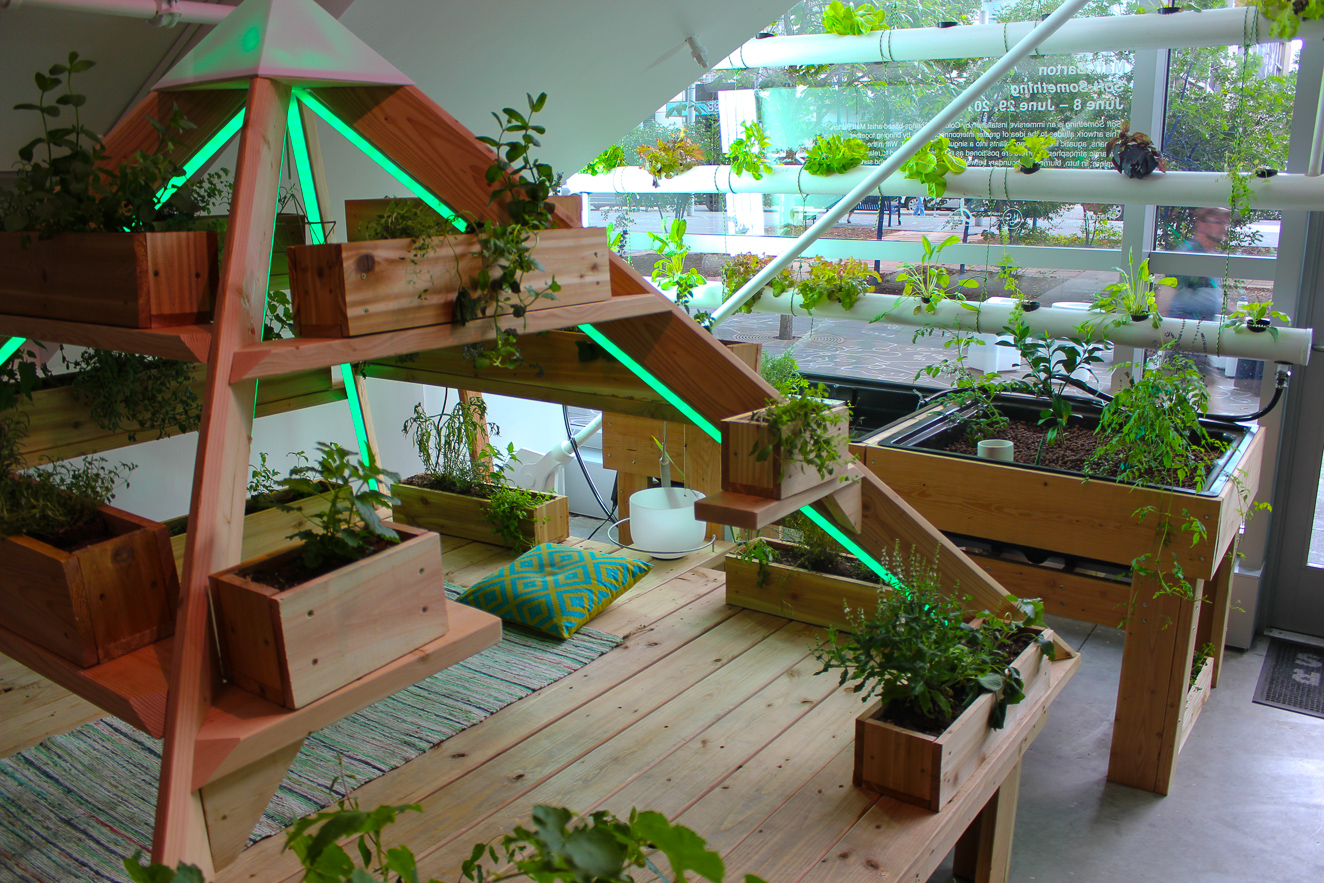 –
All photography by Cori Anderson