This morning, the Denver Police Department (DPD) unveiled their very first “art” patrol car. The project was brought to fruition in part by local graphic design and large-format print shop, Ink Monstr, as well as the kids of the Sun Valley neighborhood. These very different groups collaborated on a unique concept in order to catalyze better relations between DPD and young citizens of Sun Valley. The area is a central but often overlooked area in Denver, where the median annual income is less than $10,000 and a lion’s share of residents live below the poverty line.

“Our goal was for the [vehicle] wrap to have a design that would positively reflect the unique character of the Sun Valley neighborhood while stressing its diversity and highlighting its exciting, hopeful future and positive relationship with the Denver PD. We also wanted the vehicle to be highly visible, interesting and a magnet to draw people to the police,” said DPD sergeant Mark Novotny. 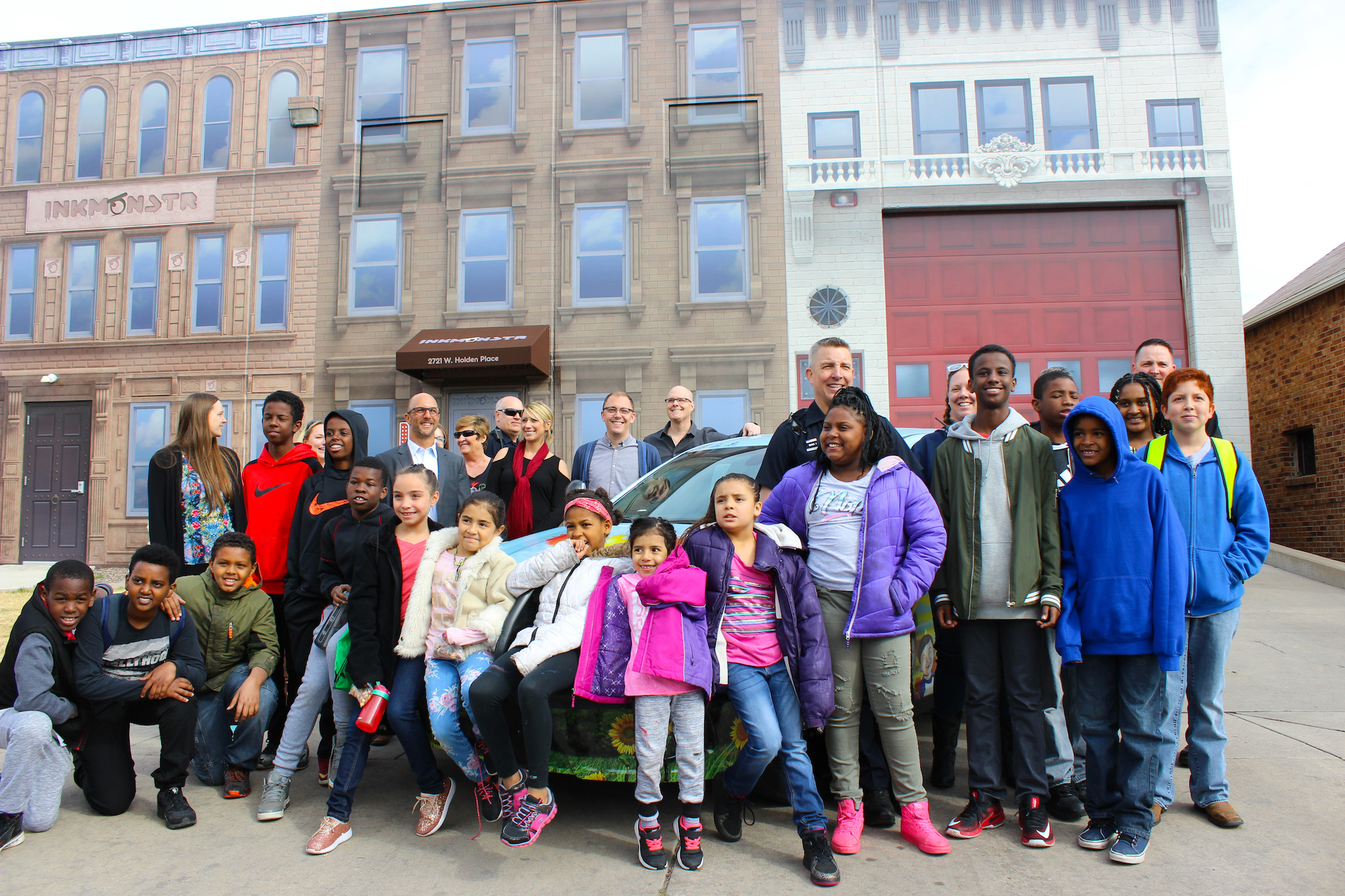 The kids of Sun Valley pose with members of the Denver Police Department in front of the first-ever art cop car and Ink Monstr’s headquarters.

Ink Monstr’s headquarters sits in the heart of Sun Valley, just a few blocks east of Federal and south of Colfax. This central location serves as a strong influence to many of Ink Monstr’s graphic designers — who produce images that strongly reflect street art, graffiti, old brick houses and other urban architecture. The artist in charge of the first-ever “art” patrol car project was Scorpio Steele, who spoke about walking around the surrounding neighborhood on his lunch breaks to gather inspiration while creating the design for the car. However, much of his design had to be informed by suggestions from the kids and the DPD, leading to over 40 child artists contributing to the car.

“The children were polled about what colors they wanted on the car, and the answer was yellow and green. Rather than make the vehicle look like a taxi, the solution was the yellow and green of sunflowers” stated Steele. “The falcon silhouette represents both Fairview Elementary School mascot, as well as the fact that the falcon was an ancient Egyptian symbol of the sun.”

At the unveiling at 10 a.m. on Wednesday morning, a large group of local kids and parents, as well as a handful of police officers and the staff of Ink Monstr, watched as the car broke through a paper banner and out of the garage of Ink Monstr’s headquarters. A mixture of gasps, laughs and claps ran through the onlookers, but the children did exactly what the DPD and their collaborators wanted them to do — they swarmed the car in curiosity. 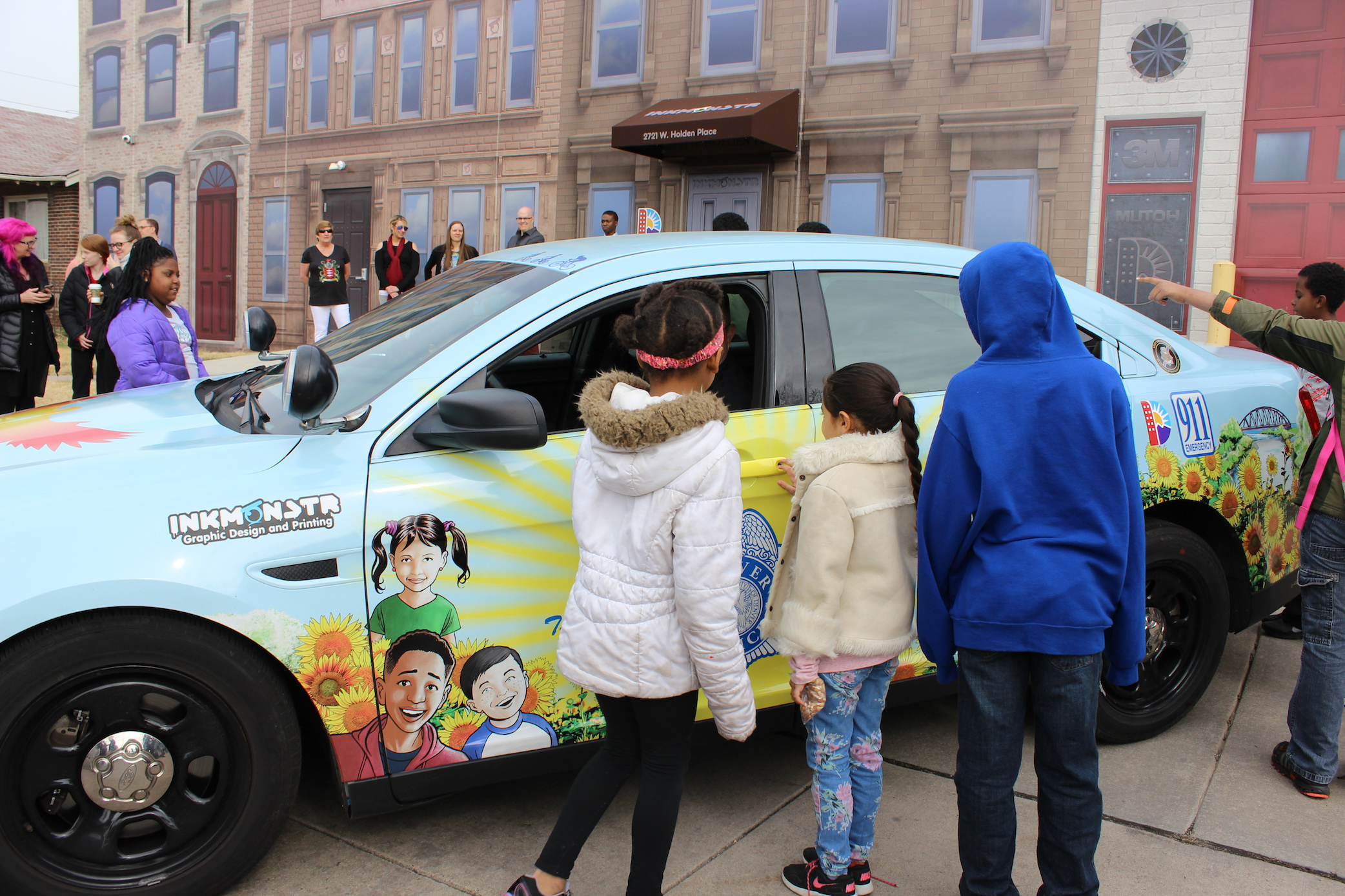 Once the art car was unveiled, children were allowed to get inside the vehicle and even set off some of the sirens.

“When we come to this neighborhood, we want kids to feel safe and comfortable talking to us. With this car, I think it will be even easier to foster those relationships. [The car] is more like an ice-cream truck than a patrol vehicle and we are excited about that,” community resource officer Rob Gibbs explained as he pointed out the cartoon-inspired graphics on the back of the trunk — one which resembled a Denver Bronco.

Ink Monstr’s CEO and founder Reed Silberman often finds ways to support the Sun Valley community, as his company calls the area home. For this project, Ink Monstr donated graphic design, labor and managed to receive a sizeable donation from 3M for the printable-reflective vinyl that covers the car. Silberman mentioned that this is the first police car to have a reflective coating that is not reserved for just the badge on the passenger and driver’s doors. This makes sure it stands out from other squad cars and entices community members to ask what it’s about. Shine a light on it in the dark and the entire thing gleams, so don’t expect to see this art car hiding on the side of the road or participating in a stealth mission.

Though the art looks seamless, the design on the car is printed on vinyl then attached to the exterior of the car, not painted. This process is a hallmark of Ink Monstr, who have wrapped everything from traditional signs, surfboards, vehicles and even the outside of their own headquarters. According to Silberman, a typical car wrap costs roughly $4,000 whereas using the fully-reflective vinyl would cost around $15,000. But, 3M completely donated the materials for the project. 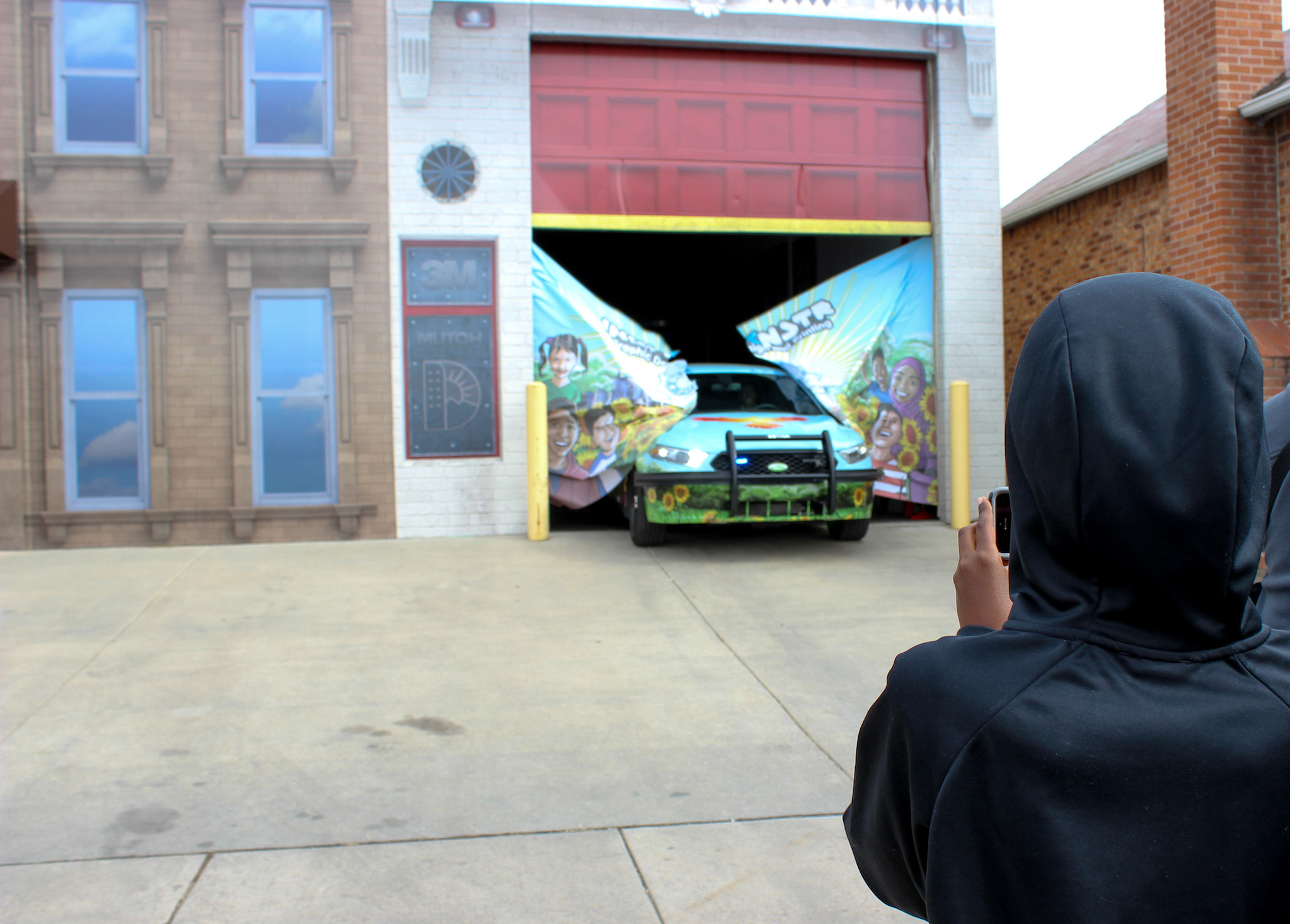 A Sun Valley resident takes video as the car bursts out of Ink Monstr’s garage.

Though the DPD doesn’t have any plans for creating another art car at the moment, it will be interesting to see how the Sun Valley neighborhood reacts and interacts with theirs. Perhaps, if it garners enough support and lightens the weight-bearing relationship between policemen and low-income, at-risk citizens, it will become a trend for other neighborhoods that need additional help.