It’s not uncommon to witness the struggle of dualities in art — life and death, progress and decline, organic and inorganic. Artists explore these themes time and time again. But Michigan-based artist Michael Reedy illustrates these constructs in a highly stylistic and visceral way, using vibrant tones, textures and extremely accurate renditions of the human body. Twenty-six of his mixed-media artworks are currently on view at Helikon Gallery & Studios until April 21, 2018, and seeing them will make your hair stand on end.

The exhibition, Dear Future Self dissects the struggles of aging while highlighting the beauty of living. Like Reedy’s previous work, these pieces center around the anatomical human figure. But unlike his previous work, the colorful and bizarre doodles surrounding most of the photorealistic renderings of people denote an attempt to be lighthearted in the face of adulthood. In this battle between real and imagined worlds, Reedy has found a way to express some very existential thoughts using a familiar landscape. 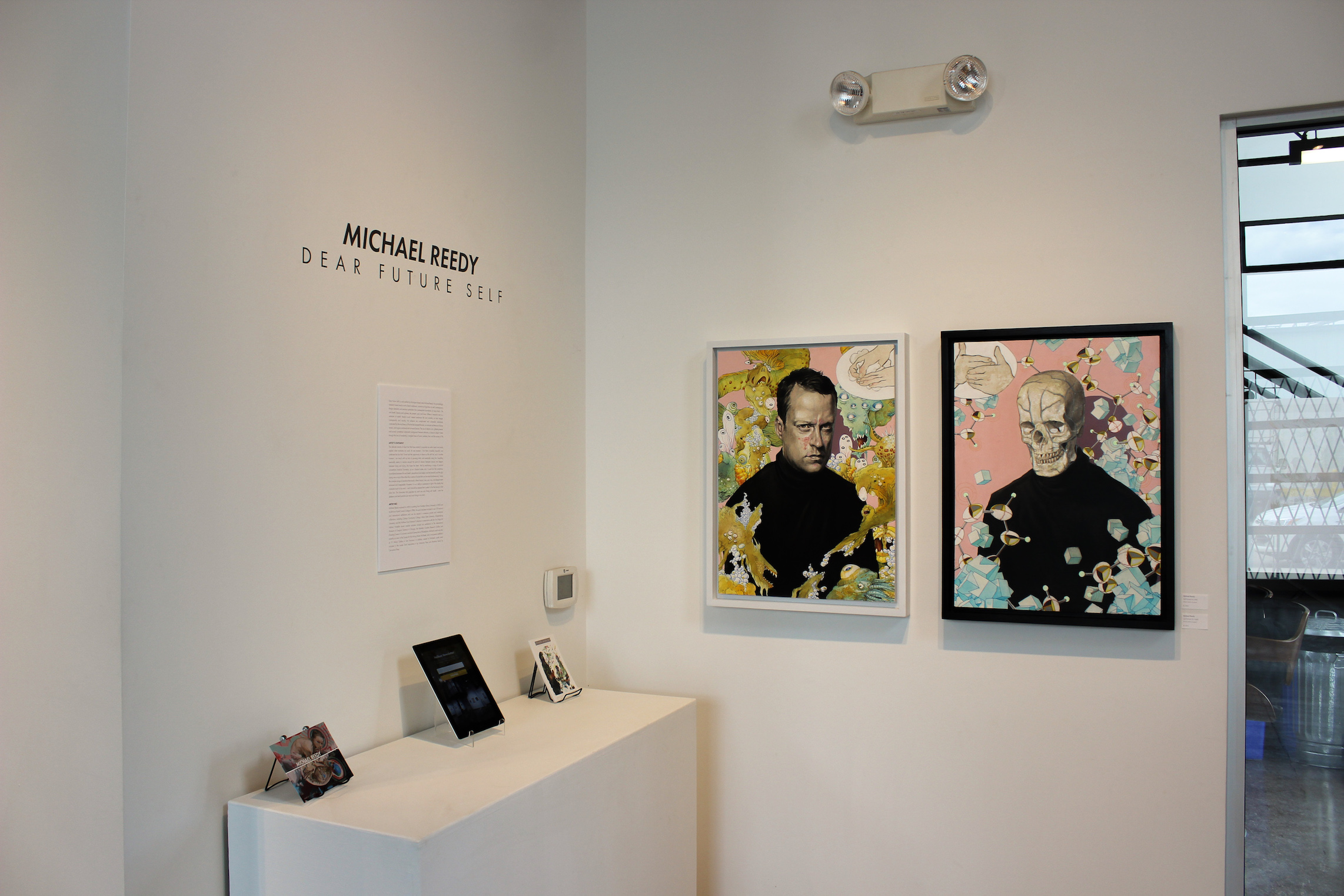 The familiar landscape is, of course, the human body. Reedy changes between people who still possess skin and subjects without skin, revealing the veins, tendons, muscles and bones underneath. This inversion is a key point in how Reedy expresses his thoughts — marking the distinction between body and soul. Many of the paintings are coupled with a reflection painting, where it is the same composition as the first but it takes a moment (as the viewer) to realize this. These juxtapositions cut to the heart of duality, and even though life and death do not lack representation, it’s the more interesting oppositions of science and spirituality or emotion and physical feeling that truly speak through his work.

In one image the viewer experiences the emotive powers of the human face — expressions that say everything without actually speaking a word. In the next image, the viewer experiences a removal from emotion and an immersion into a realm of energy. This transformation feels psychedelic or transcendental, and it provides an immediate shock. But once that shock has resided, both images appear in a new perspective. 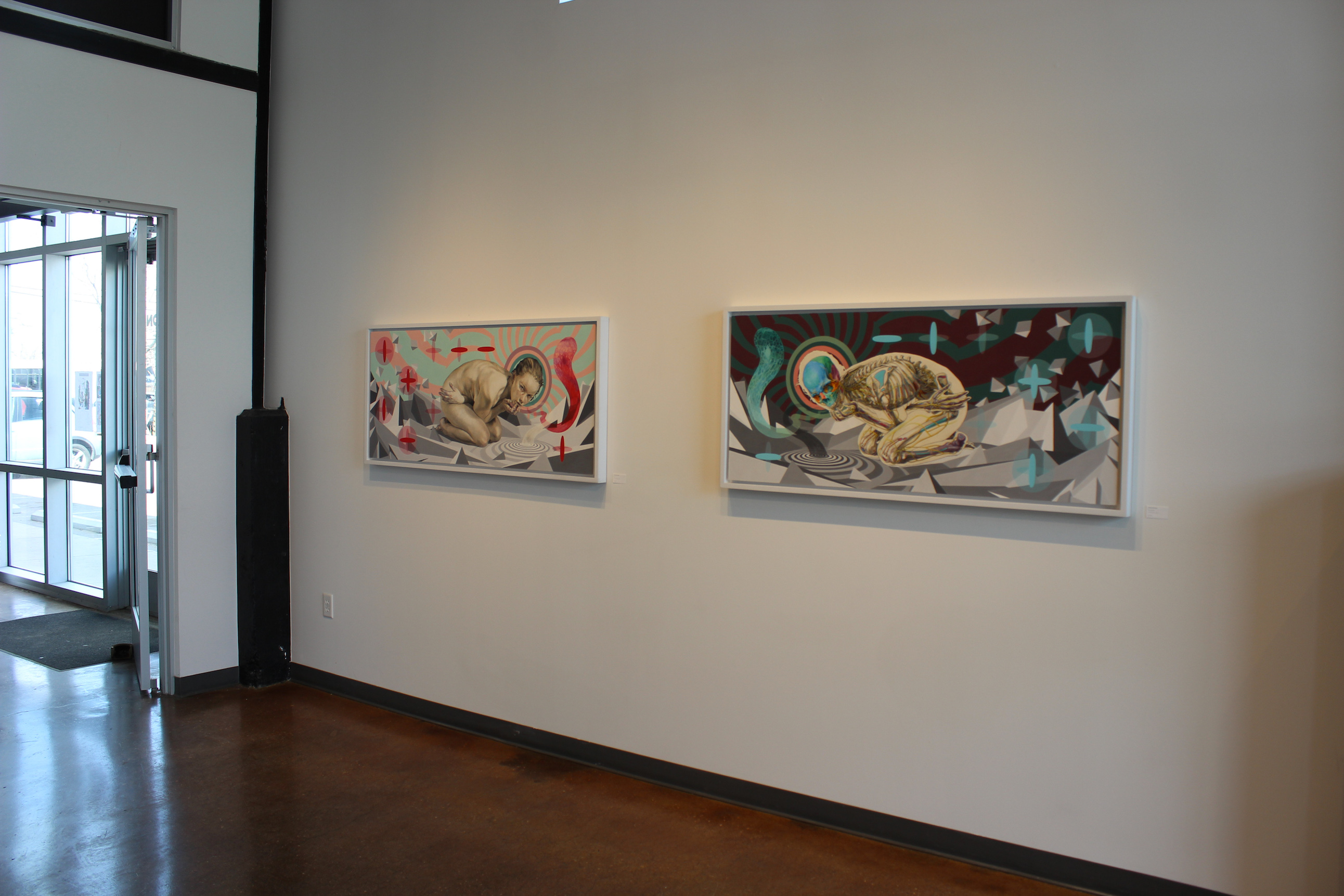 The painting “Expulsion” might be the best representation of this process. Split in the middle, on one side an unclad woman stands with a mixed expression playing across her face, amoeba-like creatures floating in some kind of aqueous solution behind her. On the other side, a flipped outline of the same woman, but instead of the woman you see the machinery inside and the background creatures now look like geometric shapes. Seeing them side-by-side gives the viewer an immediate comparison between external and internal worlds while knowing they are the same because there is only one shadow.

This split dimension also embodies the mirrored attributes of science and spirituality. On one hand, both fields couldn’t be more different. On the other, it can be hard to tell where the devotion of evidence ends and the devotion to faith begins. It’s these thoughts that keep the viewer transfixed before one of Reedy’s paintings for countless moments. 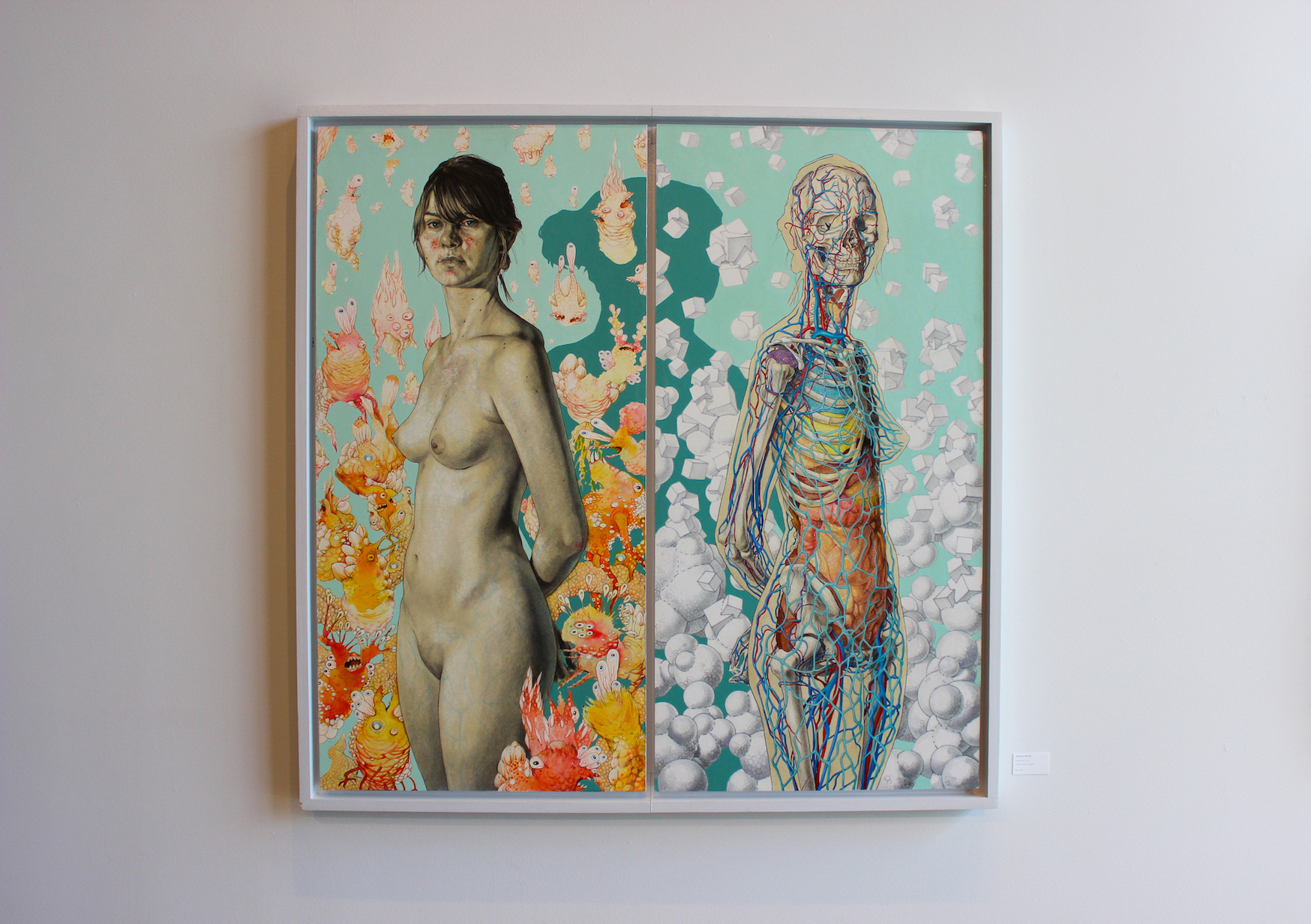 Reedy’s work is nothing short of masterful. Even in his doodles (some of which appear as run-of-the-mill blue pen) the intricacy of detail and technique finds a way to steal your focus. His confused emotions portrayed in the literal dissection of anatomical figures are reminiscent of the probing discovery and disappointment of adolescence, but the subject matter he draws betrays his age. Even when he tries to lighten up the messages behind his work, using media like glitter (yes, there are glitter on some of these paintings and it is more tasteful than any glitter I’ve seen before) it’s obvious that the issues he’s grappling with are heavy, dense and the result of time.

Taking your time with each piece in the gallery will be rewarded, as each piece holds more clues about Reedy’s state-of-mind and intentions than he might want to let on. Not only will looking for clues keep you in front of his pieces, but also the primal curiosity of understanding how we work — like mechanics trying to decipher a complicated issue beneath the hood of a car. 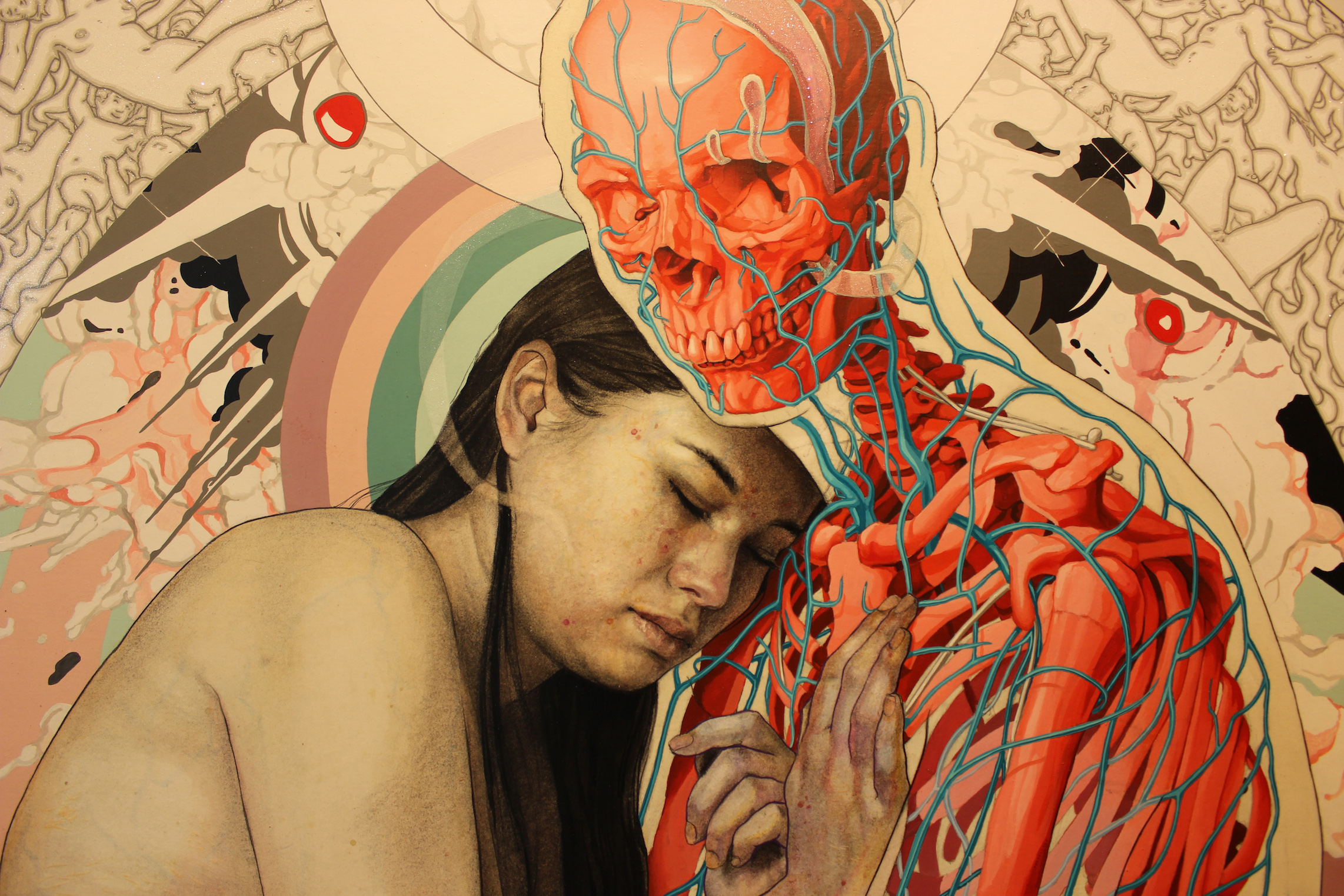 Another aspect of Dear Future Self that sets apart the work from other photorealistic compositions of people (or portraiture) is Reedy’s ability to capture a specific and unusual representation of skin. You’ll see the faint blue strips of veins in legs, breasts and on hands. You’ll see a slightly gray, yellow or bluish hue that typically comes from experiencing deep cold.

And one of the most fascinating additions? Blemishes, rashes and other skin problems especially on the faces of his subjects. These are pretty new additions to his paintings and the idea started when Reedy himself woke up with a rash on his face. When you consider these in each painting, it might dawn on you that including these imperfections is not only more accurate, it also captures a unique moment. After all, what two zits are ever the same?

“The delicate strands of silver hair that have started to populate my wife’s head most easily explain what motivates my work. At one moment, I find them incredibly beautiful, and celebrate the fact that I have had the opportunity to share my life with her, and in another moment, I am struck with my fear of growing older and eventually losing her. Everything eventually seems to revolve around this point-of-tension between beauty and despair, between living and dying.” 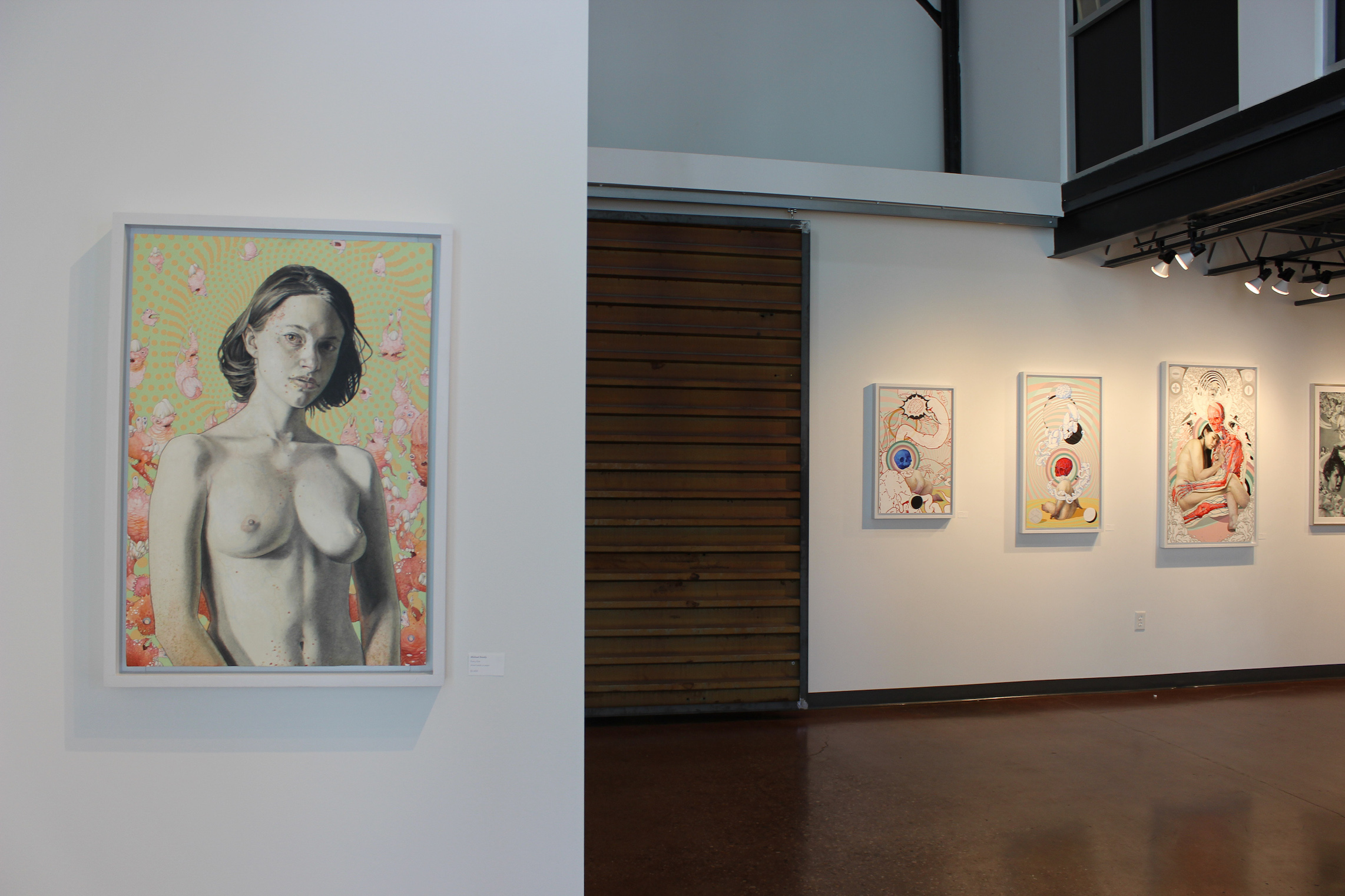 Reedy’s surreal mixed-media paintings at Helikon offer more than a moment to appreciate extraordinary art. They offer a chance to dive into the inner realm of your being — both anatomical and emotional — and find humor, beauty, sadness and eventually acceptance. They portray an artist’s journey of scrutinizing his own shortcomings, as well as of those nearest and dearest to him. And more than anything else, they make us question whether our facades are anything more than masks to hide our true inner machinery.