If You Get Caught in An Avalanche, This is Who Might Save You

If you are caught in an avalanche while skiing in Colorado’s vast out-of-bounds terrain, your only way out might be with the help of a furry friend.

Avalanche rescue dogs, or avy dogs, are an important tool ski patrol teams use after an avalanche rips through the back or side-country. When lives are at risk, ski patrol must be prepared to drop what they are doing and act accordingly.

“That’s what we’re trained for. I would look for you for hours until we found you,” said Janie Merickel, the ski patrol supervisor at Copper Mountain Resort. “That’s kind of the rescue mentality, though, is once I start, I’m ready to go.”

While she doesn’t like to say that she is in charge of it, Merickel is a key player in the avalanche dog program at Copper Mountain. For the last 10 years, she has worked with and helped train dogs that could potentially save lives in the event of an avalanche. 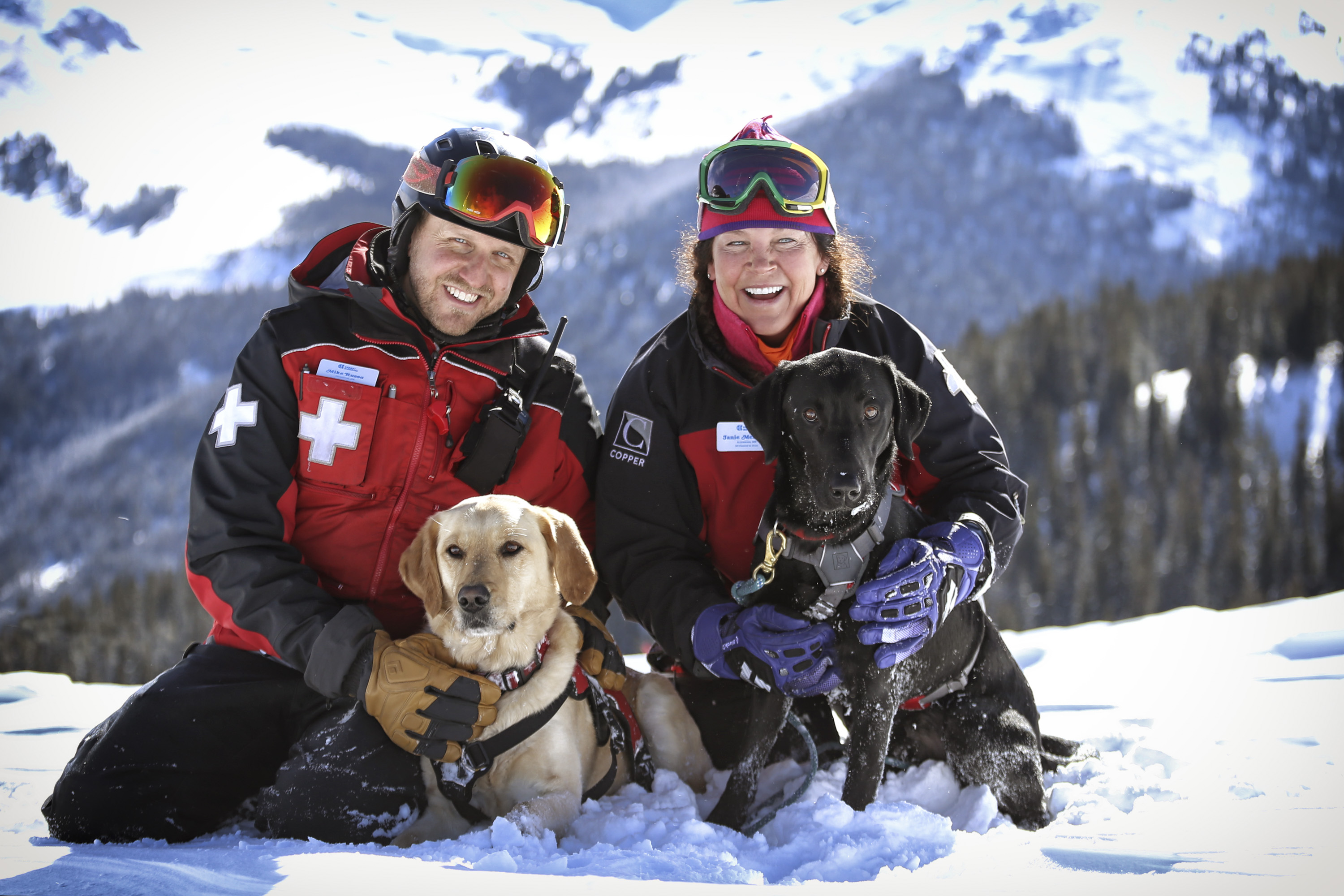 For Merickel, there isn’t a typical day on the job as the ski patrol supervisor at Copper, and that’s what she loves about it. She came to Copper after leaving her post in the high-tech industry where she worked for a company called MCI.

“The mountains, they call you,” she said of her decision to leave her career in business behind and become a ski patroller.

She likes to rise in the morning before 5 a.m. and make her way to the mountain early, so that way she can assess the mountain’s conditions and create a game plan for the day.

That doesn’t mean every day is the same. It’s quite the opposite.

One day she might be taking care of people who are sad or hurt and are miserable on the mountain. The next day she could be doing routes snow work, which she says is a huge science in an of itself. And then there are her own people, her employees, that she has to take care of and make sure they are doing well. It’s a tough job, but having been a ski patroller at Copper for over 20 years now, Merickel knows how to enjoy every moment of it.

“I think of it as the life—the ski patrol life,” she said.

What Makes a Good Avy Dog

That isn’t to mention the intensive avalanche dog training program that Merickel plays a huge role in at Copper. She has had two avy dogs that she handles herself. Her current dog, Baloo, is a black Labrador who comes from a long line of rescue dogs. When he was just eight months old, he left his brother who was training to work with the Federal Emergency Management Agency (FEMA) at the Mountain View K9 Training farm in Los Angeles, California and moved to Colorado. It wasn’t long after that when he was introduced to Merickel.

Now five-years-old, Baloo is in his prime as an avy dog. He’s free of disease, and he’s in great shape. Merickel says he could probably keep doing this job until he’s nine. 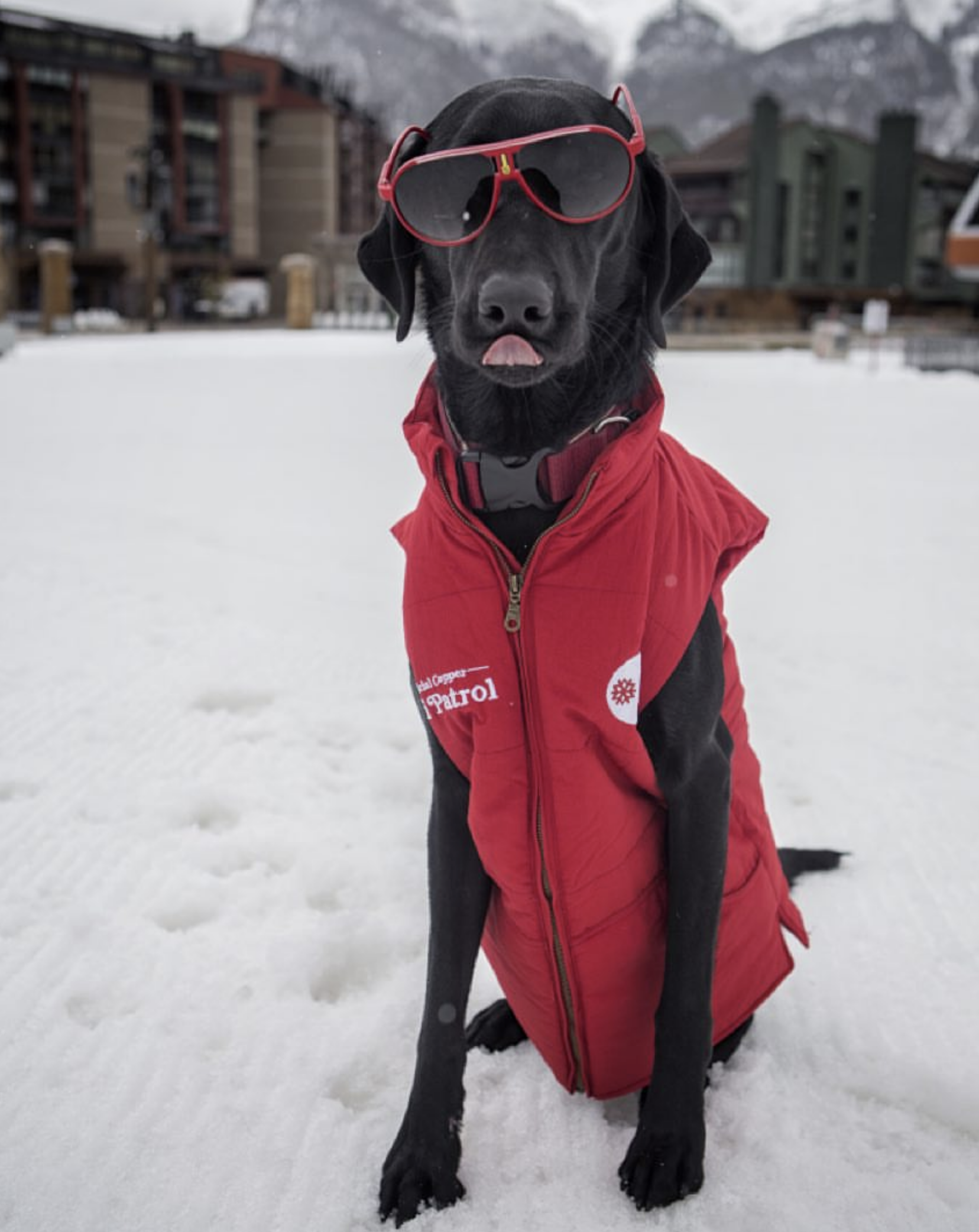 “They’re brilliant at five,” she said. “They understand the process, they understand what their job is, and they’re good at it. They love to do it, and so I feel like he’s at his best.”

Baloo is a good avy dog because his genetic predisposition allows him to be. That’s what avy dog handlers want, because the job is hard. Merickel says you can’t just take any dog and train it to be an avy dog.

“Some dogs are just born—are made to work. If you’re teaching a dog really how to be a good worker, it’s a losing proposition,” she said.

Bravery, confidence and intelligence are some of the key traits that Merickel looks for in a potential avy dog. Baloo displays all of them.

One test Merickel likes to use when the dogs are puppies is to throw down a shovel onto a concrete surface. She wants the dog to be just a little startled, but not enough to be scared away. A good avy dog candidate will go over to the shovel, bite it, and try to carry it away. Merickel says the dog should be thinking, “what made that noise? I’ve got you.” She wants brave dogs who are willing to run into a potentially lethal situation with only one thing on their mind—saving people’s lives.

The bond a handler shares with an avy dog is a huge part of creating a successful relationship between the two. It took about a year for Baloo and Merickel to establish that.

“He was so high drive. He was a terrible pet,” she said.

After months of spending time together and training him to be obedient, their bond solidified. She said she can look at him and almost tell what he is thinking, and that’s not uncommon for handlers to say. They spend so much time training and sharing experiences with the dog that they can truly understand one another.

“I understand what he’s going to do, or why he’s doing what it is he’s doing. And he really understands me,” she said.

Avy dogs are better experts about certain aspects of avalanche rescue than the handlers themselves. Merickel likes to use the analogy of an empty library acting as Baloo’s brain. Each time they train together, another book gets placed on a shelf, and he doesn’t forget it.

“He’s got a tiny little brain that’s the size of a walnut. But what they know, they know way better than me,” she said. “So if I trained enough and I fill that library shelf up with books, then we have all those experiences to fall back on and put together to solve the problem that we might be working on.”

She says although it is vigorous, the training is enjoyable for the dogs. During the winter, a typical training scenario consists of Baloo going to a scene where there is a victim who is buried in a dog hole. Merickel is close by but not right near him. She wants him to be able to act instinctively and independently in these situations because avy dogs need to be able to replicate that in the case of an avalanche. Throughout the session, Baloo will dig and bark continuously until he gets to what Merickel calls the quarry, or the victim.

“That’s what I would expect him to do in a real event,” she said. “If you are underneath the snow, I would think that you would feel my dog Baloo really kind of scratching at you.”

Merickel says that the dogs tend to usually go to the head of the victim. She thinks that’s because that is where the joy comes from. The victim who is being dug out by the dog is cheering it on, and the dog is stoked.

In the summer, Baloo’s training doesn’t stop. To make sure he doesn’t lose his focus in the off-season, Merickel plays a big game of “hide n’ seek” in a mile-by-mile area with Baloo. His mission is to find someone who is lost in the forest using his sense of smell.

How Avy Dogs Could Save Your Life

According to the Colorado Avalanche Information Center, which displays data on avalanches in the United States dating back to 1951, the state of Colorado is the deadliest place in the US to be caught in an avalanche. There have been 275 fatalities in the state that were directly related to avalanches — Alaska is the second-deadliest state with 150 deaths.

Even so, it’s unlikely that you will be caught in an avalanche during your spring skiing trip to Copper Mountain. According to Merickel, avalanches tend to only happen out of Copper’s bounds in the surrounding bowls near Vail Pass.

“I’ve worked here 20 years and there really hasn’t been a lot of activity, however people do get outside of our rope line,” she said. “I’m physically close to Vail. It wouldn’t take me very long in a helicopter to get to Shrine Bowl or some of those other areas where they have avalanches a lot.”

An avalanche rescue team consists of three players: the dog, the dog handler and the avalanche technician. All three work together to accomplish their mission, which is to get somebody out of the snow alive. When they get a call, they are ready to go at a moment’s notice. But if time isn’t on their side, the outcome could be fatal. 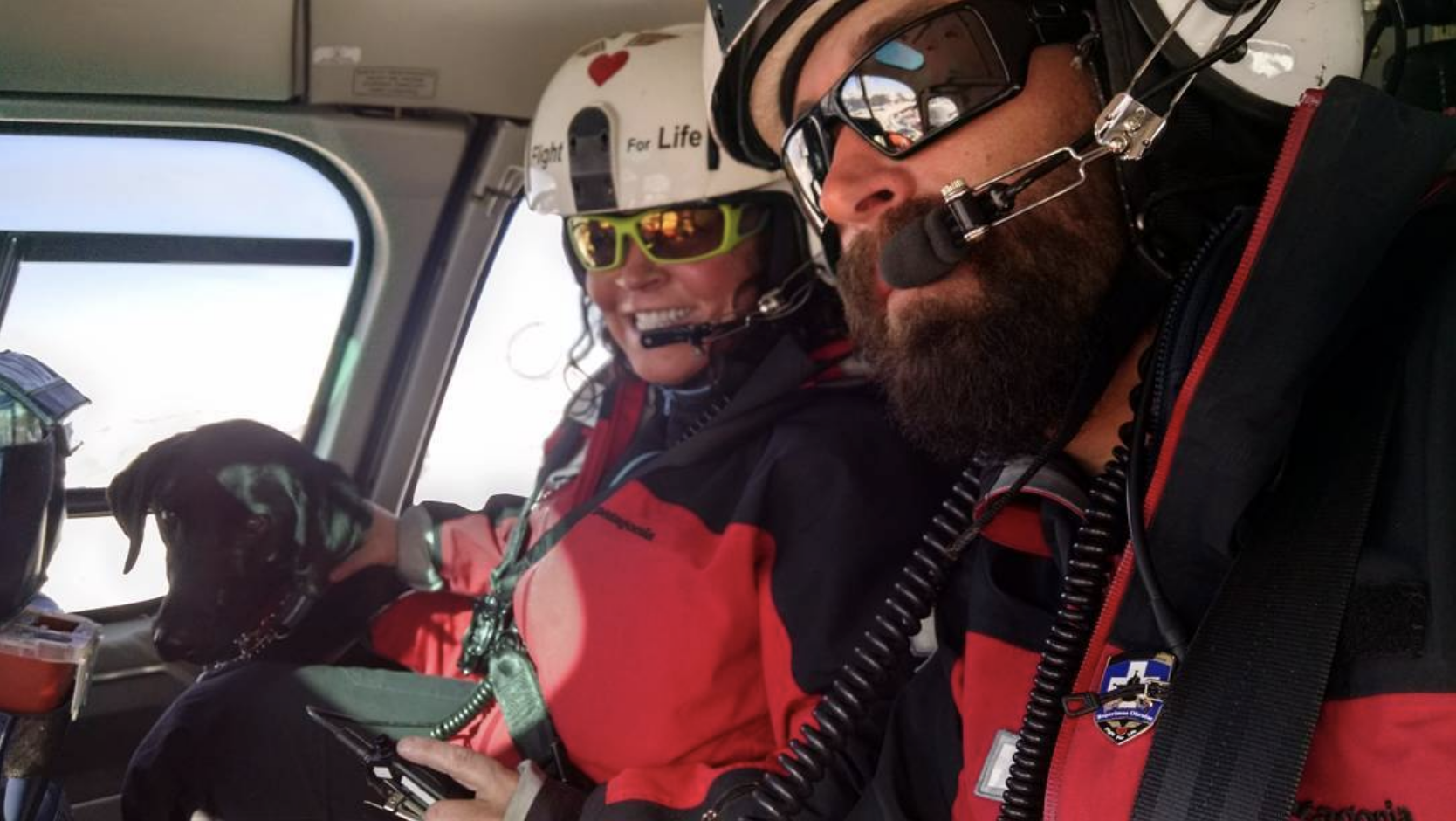 Janie Merickel, Baloo and an avalanche technician at Copper Mountain in a Flight for Life helicopter.

“The effectiveness of an avalanche dog or C-RAD (Colorado Rapid Avalanche Deployment) in my worldview has to do with time,” Merickel said. “Am I able to get into the helicopter to get there within 15 minutes?”

Ski patrol and search and rescue will search for someone until a body turns up or the all-clear is given. The standard timeline for having a good chance of being rescued, however, is 15 minutes. If the handler, the dog and the tech can’t get to the location of the avalanche in that time, the chances of rescue are severely diminished.

Even worse, if you are buried deeper than two meters, your chances of being sniffed out by a rescue dog are slim. And even if the dog does locate you, at that depth it becomes difficult to efficiently move the snow around, which means that the window for creating an oxygen pocket for the victim quickly expires.

Although a dog’s keen sense of smell is a great asset to ski patrol during avalanche rescue missions, Merickel says there is no greater life-saving tool than the people skiing with the person who was buried. The best chance of surviving an avalanche, she says, is by having proper avalanche safety education and trusting that the people who are skiing with you do too. That way, if you do get buried, they know how to take action before a rescue team arrives.

“If you are skiing with your buddy in Vail Pass, the best thing, person or element for avalanche rescue is you. It is not me and my dog,” she said. “It’s the person who’s skiing with you that is your best hope of getting out of that alive, hands down.”

During her time as a ski patroller, Merickel has been on three or four avalanche rescue missions where she had a dog assist her. Thankfully for the Ski Patrol at Copper Mountain, there hasn’t been an instance where they had to dig anyone out of the snow with a dog dead or alive. But, with the company and help of man’s best friend, they are always prepared for the worst.