With the tour of his latest album, Flower Boy, underway, Tyler, the Creator was ready to spread his pollen to the Mile High City. Along with the help of openers Taco and Vince Staples, the 1st Bank Center held a powerful night filled with narratives of gun violence, anxiety and isolation and an overall protest of our current political state.

Taco (birth name Travis Bennett), a DJ of Odd Future, began the night with familiar tunes including Kendrick Lamar’s “Backseat Freestyle” and Kid Cudi’s “Pursuit of Happiness.” Although the songs didn’t appear to be altered or remixed in any way, the crowd was down to enjoy some recognizable songs as they sung along and swayed to the beats. Then suddenly, as the next act arrived, the masterpiece of a night truly began.

Like an episode of Black Mirror, the stadium went dark as static-filled scenes of a newscast flooded the stage above. “Divorces are on the rise,” one newscaster eerily chirped to the other. “We do seem to be dividing,” the other responded with a plastic smile. Fog began to seep throughout the stadium as a storm of strobe lights took over the stage. Through crackling and flashes, Vince Staples slowly emerged with a loud growl — “Denver, how y’all feeling tonight?” 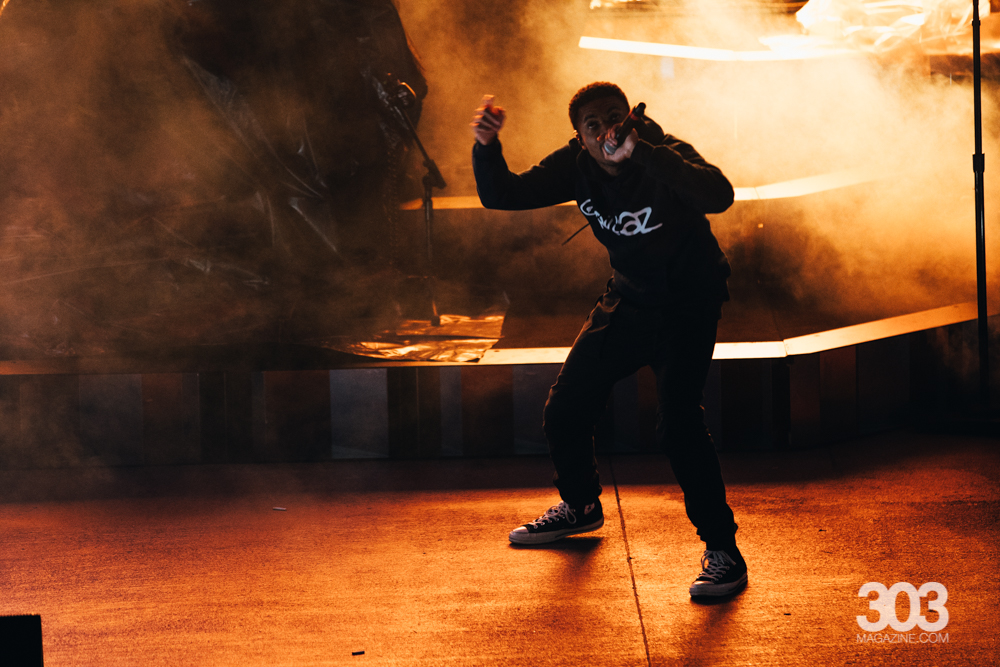 Donning a black bulletproof vest, the 24-year-old raised in Long Beach was ready to do more than rap — he was here to protest. With clear political messages strung throughout his set, Staples wasted no time in proving his genius with what was arguably a form of modern-day performance art. While gripping a red inhaler during “Lift Me Up,” for example, Staples proceeded to cry out “can a motherfucker breathe?” — an obvious nod to the killing of Eric Garner back in 2014.

As creepy newscasts continued to intervene between songs, Staples persisted in creating his uncanny dystopia. While chanting the lyrics, “Is it real?” from his famous song “Prima Donna,” audience members were begging the same question — the line between reality and fantasy continued to blur through an overstimulation of lights, political lyrics and screens filled with artifacts of American culture. Do we really have the president that we do? Is this current state of affairs our actual reality? In a single show, Staples left listeners asking all of this and more, displaying an artistry so powerful that President Trump himself should be shaking.

Finally, the night’s headliner and equally ingenious performer, Tyler, the Creator (birth name Tyler Okonma) took the stage. Nodding to his Wolf album cover, the set resembled a forest scene as the carnivore himself emerged while “Where This Flower Blooms” roared in the background. With his hair shaven to resemble leopard print and a neon yellow vest and shorts, the artist was hard to miss as he stood atop a sloping hill from his set. “Y’all good Denver? It’s cold as a bitch out here,” the rapper finally roared, earning deafening screams from the crowd.

Transitioning into the slow build-up of “911/Mr. Lonely,” the performer displayed his innovative ability to juxtapose slower rhythms with dramatic chorus drops, jerking the crowd back and forth between getting hyped and calmly swaying. This musical whip-lash left everyone empathizing with the artist’s feelings of isolation as he chanted out, “I’m the loneliest man alive… from the start it’s been real dark.” Opposing the typical hard-hitting lyrics of rap, Okonma allowed vulnerability and authenticity to wash over the crowd, bringing a multitude of feelings into the arena. 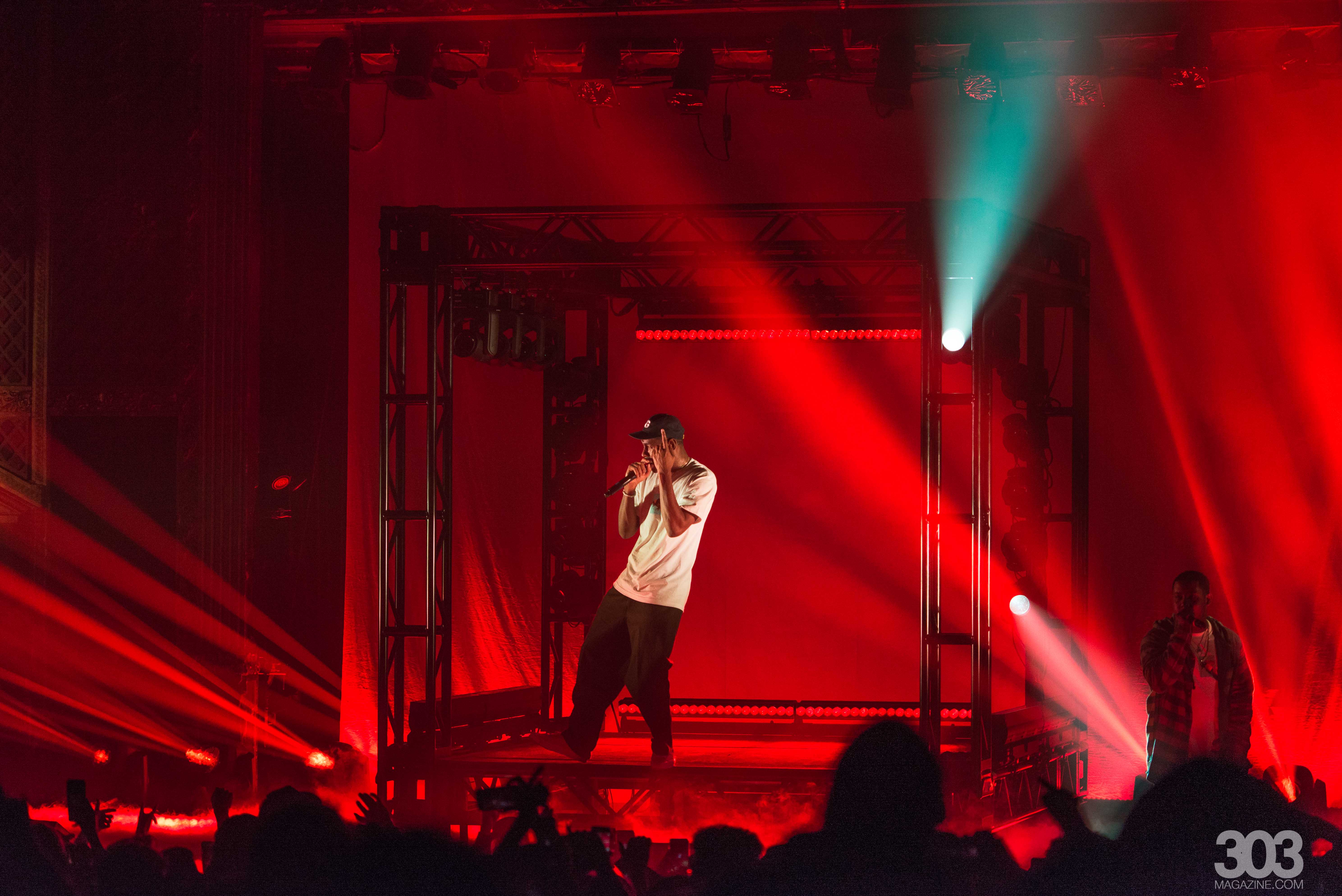 Tyler, the Creator performing at The Ogden in 2017. Photo by Alden Bonecutter

Almost immediately, objects were thrown at Okonma, including bras and even a brownie. “What’s in this? I don’t trust this,” the performer teased while attempting to pass the gift back to the crowd. Continuing to intermingle with the audience and even wishing a happy birthday to a fan, the rapper then finally asked, “Can I do some old songs?” With applause as his answer, Okonma jokingly rolled his eyes as the beat of “IFHY” poured out of the speakers.

The leader of Odd Future carried on with many of his classics including “Yonkers” and “48,” before returning to songs off Flower Boy. The work contains a meshing of numerous artists including Frank Ocean, A$AP Rocky, Lil Wayne, Jaden Smith and Estelle — just to name a few. Since its release, the creation has garnered immense success, even receiving a nomination for Best Rap Album at the 60th Annual Grammy Awards.

Although Okonma managed to transport on-lookers into his fictitious, freaky forest, it was Staples who left a lasting impression. Both artists showed clear signs of creativity, ingenuity and vulnerability, yet Staples took larger risks that won’t be soon be forgotten.