Meet the Colorado Artist Who Handcrafts Medals, Trophies and Awards

With the Olympics in full swing, it can be hard to concentrate on something like art. Especially with over 30 Olympic athletes representing Colorado, many viewers are interested in the medals they might bring home. Have you ever wondered about where those — and many other — medals, trophies and awards come from? As signifiers of triumph, perseverance and success, medals present a large arena for artistic expression that many do not give enough credit to. In the spirit of the Olympics and other award-winning competitions, 303 Magazine spoke with an artist from Ridgway, Colorado who spends her time crafting awards that are as special as the people who win them.

READ: Meet the 30+ Coloradans Competing in the 2018 Winter Olympics

Lisa Issenberg started her artistic career during her undergraduate studies at Tufts University, where she found joy in making jewelry but did not find a true passion with metal until she started welding after college. In the early ’90s, Issenberg moved to Telluride on a whim with a friend, to become a ski bum for a year and “figure life out” only to find herself enchanted with the little mountain escape. She left periodically to go to graduate school in New York and art school in San Francisco, but couldn’t leave Colorado for good, eventually finding a home in Ophir (a tiny town not far from Telluride.)

What fascinated her during graduate school, and what influenced the trajectory of her career, was the history of industrial design. She fell in love with the idea that form and functionality could marry with beautiful aesthetics. Her biggest influence came from the Bauhaus— a German art school that operated in the early 1900s and that combined construction with fine arts. It also pushed her to create artworks with utility in mind. “Prior to going to graduate school, I would come up with one design for something and that would be it. I could feel my own limitation in my mind and what I learned is there are no limits. You have to keep working on something, go deeper and deeper until the design is right,” Issenberg explained. 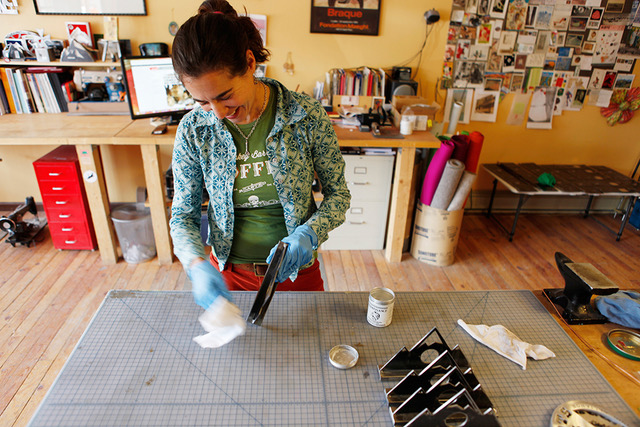 Issenberg in her home studio in Ridgway, Colorado. Photo by Elizabeth Riley

Issenberg owned her own metalworking business in Telluride throughout the ’90s and was creating pieces based solely on commission. Anything from railings, to trash receptacles, to architectural work and occasionally an award. Her first big medal production was presented to her for the Snowboarding World Cup in Telluride in 2009. She came to realize her favorite projects were the awards and decided to focus solely on those, founding the business Kiitella. Kiitella means ‘to thank, applaud, appraise’ in Finnish and was chosen by Issenberg based on the influence of the simplicity of Finnish design as well as a close friend being Finnish. What attracted her to creating medals, awards and trophies were twofold; it gave her an opportunity to celebrate the accomplishments of an individual with a one-of-a-kind piece of artwork, and it provided her a challenge to create something special and functional. “I’ve always had a fascination with industrial design and awards seem to fall somewhere in the middle of that and art. I have to work within certain constraints— who it’s for, who it’s from, why they’re receiving it—and that excites me,” commented Issenberg.

Once she made the full-time commitment to focus on medal making, Issenberg flourished. Since then she’s been creating medals for world-class athletes, as well as venturing into the world of climbing, environmental awareness and film festivals. Notable athletes who have received an award handmade by Issenberg include Mikaela Shiffrin (10), Ted Ligety (four), Megan McJames (six) and Lindsey Vonn (two). The opportunity to create a physical testimony to someone’s philanthropy, athletic prowess or other notable action satisfied Issenberg in a way other metalworking could not. She uncovered a niche where she is able to immerse herself in research while also being creative. 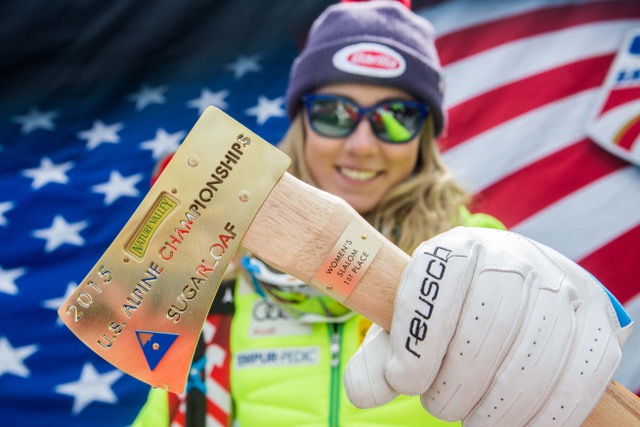 In the last five years, Issenberg has designed and crafted awards for organizations like the American Alpine Club, Brad Washburn American Mountaineering Museum, Camber Outdoors, the Colorado Office of Film, TV and Media and more. Her goal is to create completely unique pieces that truly represent the accomplishments of the person receiving it. In order to do so, Issenberg designs using CAD (computer-aided design) and sends those to be industrially water jet cut. Then, in her workshop, Issenberg uses different handcrafting techniques— like polishing, sanding, welding and adding photography, incorporating bamboo, wood or other mixed mediums—to individualize each piece. From start to finish it typically takes Issenberg three to five weeks to visualize, plan and implement a design.

“With any handcraft, you can shoot for perfection but it’s never going to happen. Since my work is a perfect synthesis of industrial techniques and handcraft, I think it gives it soul. I’m drawn to industrial processes where something is actually perfect, made by machine, but I’m also drawn to that handmade look. No two medals are ever the same, much like no two people who receive my medals are ever the same,” Issenberg confided.

Coming up in the next few months, Issenberg will handcraft medals for the US Alpine and Freestyle Championships, as well as the US National Freeskiing and Snowboarding Championships (a competition she has been fabricating awards for since 2013) and the American Alpine Club’s annual benefit. Her sights are focused on moving into the film industry more, hopefully being able to create medals and awards for film festivals like Sundance, and maybe our very own Denver Film Festival.

Sometimes it’s easy to pass up the more narrow avenues of artistic expression, but it’s always enriching to find someone who embraces the opportunity to combine utility with beauty. Next time someone wins an award, like our own Olympic athletes, give a moment to think about the person who crafted that award because chances are that person is as interesting as the recipient.