There is a well-known phrase that “God is in the details”— a suggestion that attention paid to small things can have big rewards. Denver-based artist Eriko Tsogo‘s newest exhibition, displayed at Leon Gallery February 17 to March 31, 2018, embodies this concept. Wrong Women; Myths from Sky does not have an immediately intense impact, but it’s a body of work that exposes Tsogo while also slithering into the psyche of the viewer. From the moment you walk in the door, prepare yourself to literally and figuratively get up close and personal with Tsogo’s work— a mixture of finely detailed drawing, print transfer, stickers and ink illustrations. 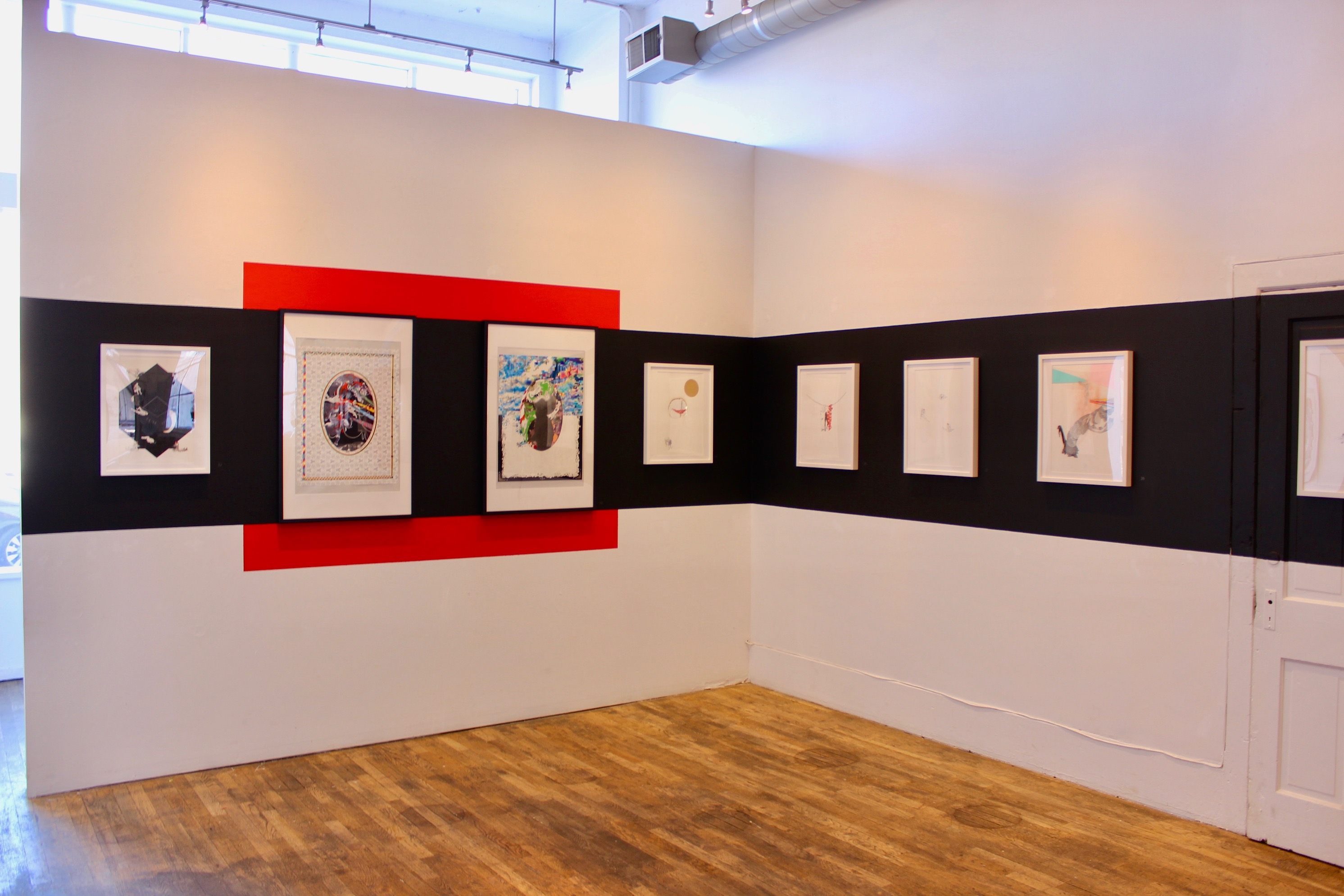 Tsogo is a first generation Mongolian-American immigrant. She was born in Mongolia, raised in Hungary until the age of eight when she and her family moved to the US. According to Tsogo, she is “the only actively practicing Mongolian-American woman artist in America.” Though her Mongolian heritage might not be immediately apparent as an influence on her work, the split nature of being from one place and being raised in another plays an enormous role. This is shown repeatedly in her choice of opposing ideas, symbols and color palettes. This innate juxtaposition also comes from her desire to return to her home country and the obstacles she’s encountered in pursuit of that goal. “I have been unable to go back to Mongolia for over 18 years because of political/document reasons,” Tsogo explained. “I am currently a DACA applicant (Deferred Action for Childhood Arrivals) who suffers from a politically unpredictable future in American because of the new Trump administration.”

These personal experiences weigh heavily on Tsogo’s art. “I seek to explore the conflicting psycho-spiritual, cultural and disjointed effects of globalization on marginalized identities with attention to women’s issues,” wrote Tsogo in her artist statement. It alludes to another influence readily seen in the art— an intimate and sometimes disturbing view of the feminine form.

At first, Tsogo’s portrayal of the human body might seem grotesque— with wrinkles, sunken musculature, and dissected limbs— but it is more accurate to describe it as surreal. Instead of disgust, the images incite curiosity. Some of the dreamlike (or nightmarish, depending on your taste) qualities of her subjects call into reference Salvador Dali’s bizarre paintings. But instead of using the complex tactics that Dali employed when he painted something like his most famous piece, The Persistence of Memory (the one with the melting clocks), Tsogo is able to illustrate similar concepts with only sparse lines, space and the smallest ink lines you can almost imagine.

The result of her work is deceiving because it is incredibly meticulous detail that occurs through a stream-of-consciousness approach. “I experience my artistic production as an act of creative play between subject and object, and aim for a convulsive spontaneity in the journey of their creation,” Tsogo commented. Instead of painstakingly planning each line, she allows her drawings to take on a life of their own. In that way, it’s easier to grasp that much of her subject matter hinges on the esoteric, the metaphysical and the murky boundaries of a dream world.

But Wrong Women; Myths from Sky does not get lost in vagueness. Nor does it remain exclusive to women. “By revealing the strange and curious inner-workings of the human condition, I aim to examine the fluctuating operations of human identity, desire, horror, wonder and fantasy,” Tsogo commented. Admittedly, most of the pieces in the show center around a woman’s body, but the issues and hopes probed by these representations are universal to any and all genders.

Tsogo not only illustrates, she also writes, experiments with multimedia and makes films— with her first international documentary set to release in 2019. Her ability to move between these mediums adds more depth to her two-dimensional work. Movement and reaction that are inherent in filmmaking and animating translate to her drawings, and her familiarity with using words to invoke emotion comes through in the titles of her work. It may be a matter of personal choice, but try inspecting each piece before reading the title and see if it changes your understanding or interest of it.

“My artistic process derives from a balance of intuitive and concept-driven methods of experimental creation. In my drawings, I seek to create visual tension through automatic and intended mark making. I like to fuse binary concepts and techniques of representation, from contrasting languages of wet and dry textures, precision and chaos, into stimulatory layers,” Tsogo explained.

Tsogo’s detailed and exploratory work will be displayed in Leon Gallery at 1112 East 17th Avenue until March 31. An artist talk and book signing will be held on March 10 from 2 to 4 p.m., an artist workshop in conjunction with Month of Printmaking will occur on March 24 from 10 a.m. to 4 p.m. and the closing reception will feature a special performance on March 31 from 7 to 11 p.m. The original pieces are available for purchase and carry a pretty reasonable price tag— somewhere between $300 and $1,500— considering the fastidiousness of her drawing. Prints are also available for a small selection of the pieces and only cost $25. Even if you don’t have plans to purchase something, it’s worth an hour of your day to disappear into her dreamscapes and come out with a new perception of yourself. 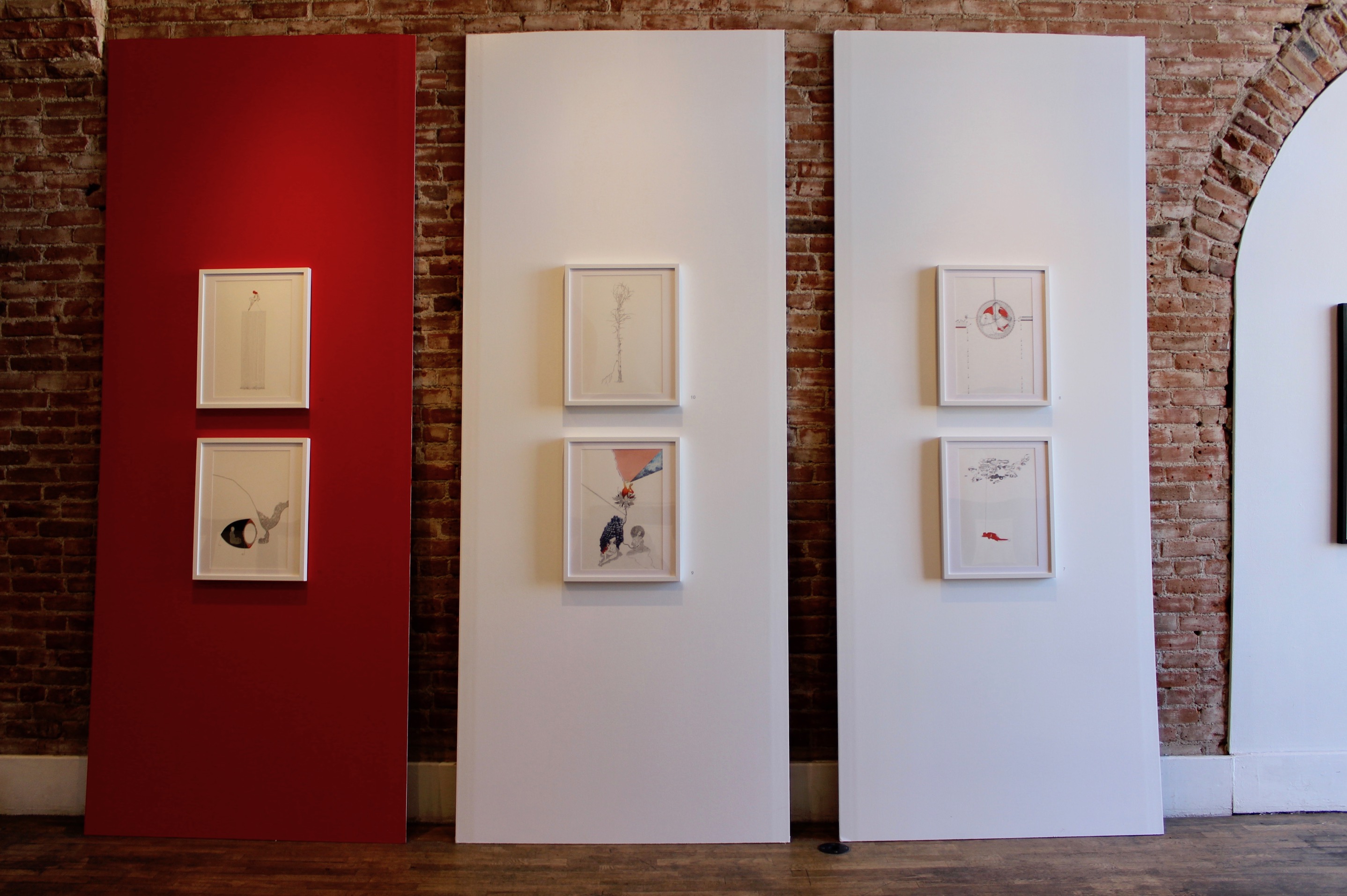