The mention of bronze sculpture might conjure images of life-sized statues of firefighters, or a likeness of a moose or elk. If the sculptures aren’t outside, they tend to favor figurines— your grandparents might have one sitting on their mantle, as mine had an eagle, a columbine flower and a pine cone sitting on theirs. As far as contemporary art goes, bronze sculpture isn’t necessarily the first medium that comes to mind. Enter M. Thompson, a fairly new 29-year-old sculptor who works out of the mountains near Vail, creating pieces of art with metals that go far beyond those typical statues and figurines. Her current subject matter is the wonderful world of fungi, and her bigger picture ideals look at why some of us feel centered and at peace in nature. 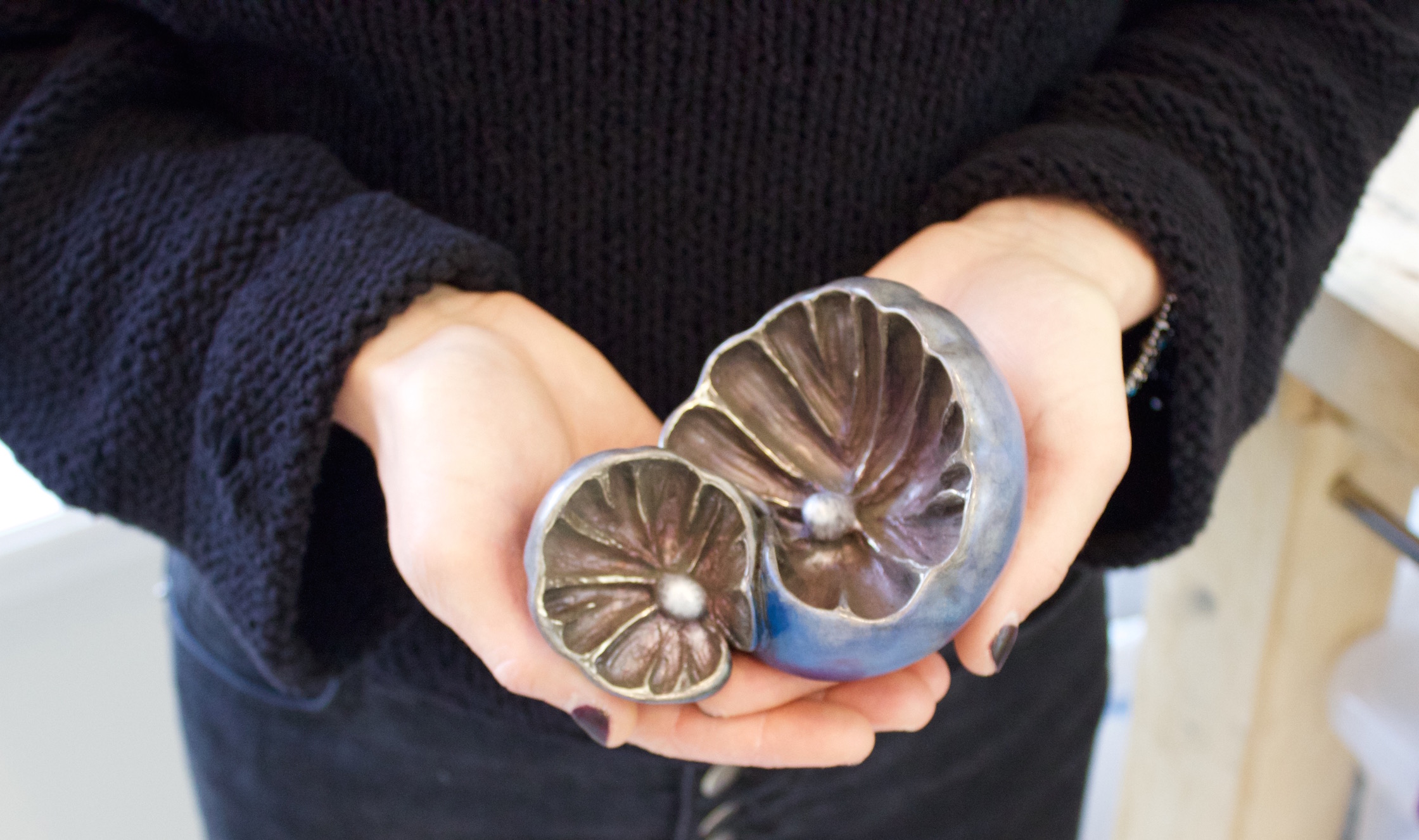 Thompson holding one of her bronze sculpted mushrooms. Photo by Cori Anderson

Margaret Thompson signs her work “M. Thompson.” It’s not important to her that people know her gender, even though as far as sculpture art goes, working with metals evokes a sense of masculinity. Thompson doesn’t want to shy away from that but also she feels no allegiance to it. Her intentions are deeper than those superficial designations, and the result in a growing body of work bound to make people turn their attention toward bronze sculptures and their makers in a new light.

“How can I use this medium to be my own steward of the earth?” she commented,  “I don’t want to just make pretty things for people to look at. Whether that be giving back from profits, or making a fundraiser from an exhibit, or simply just creating something that is so driven by the environment that it inspires someone else to explore their own relationship to nature and begin to work with that in a mindful way.” 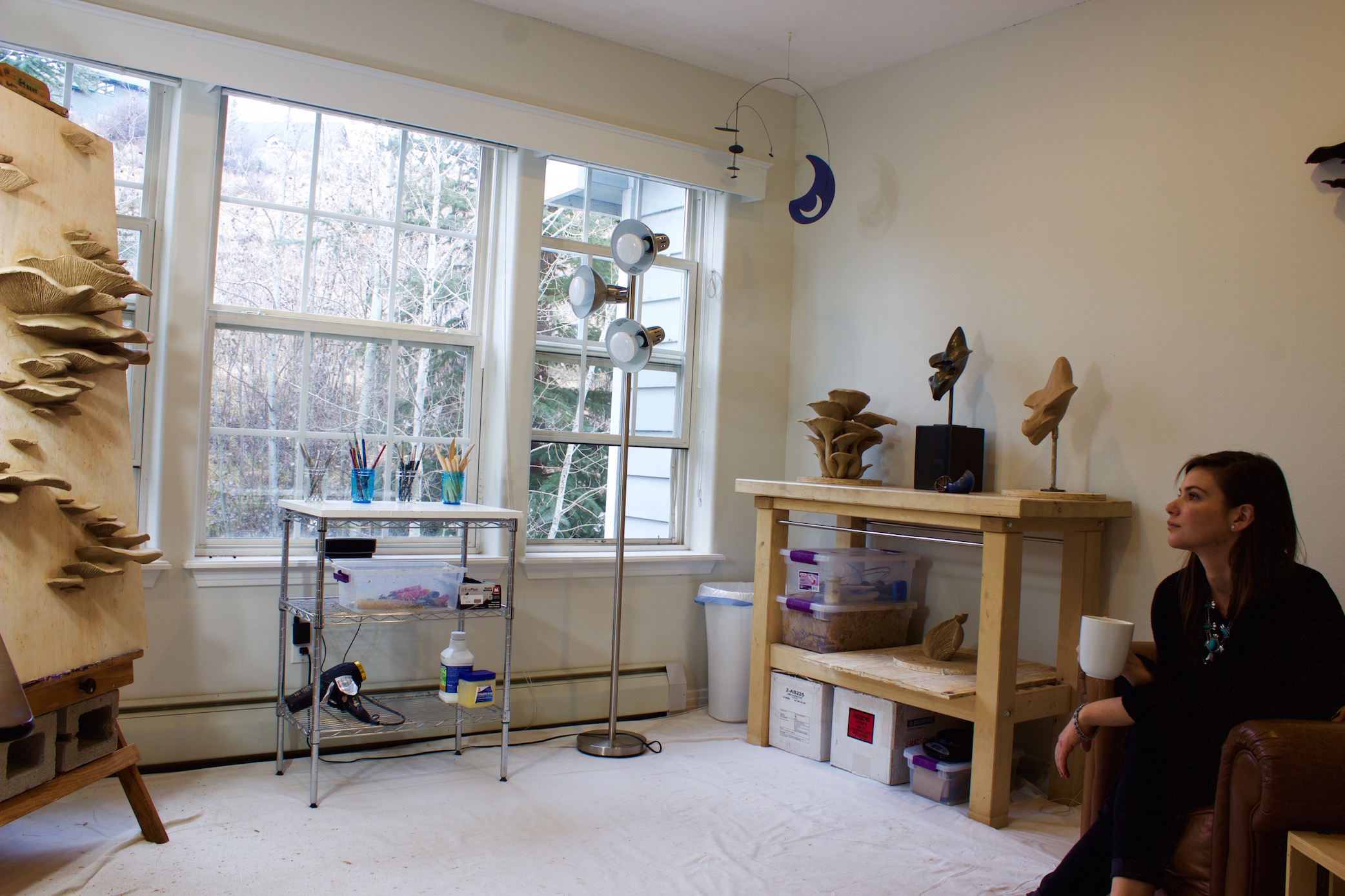 Thompson in her studio. Photo by Cori Anderson

Back to the mushrooms, then. Thompson’s newest series focuses on a variety of fungi— from polypores to oyster mushrooms and more. By working on these pieces, she is exploring a mysterious curiosity that fuels her creative drive. “I don’t like eating any kinds of mushrooms,” she commented, in her studio in the mountains, “I think they’re incredibly beautiful but they are captivating to me on a very primal level that I don’t really understand. I keep trying to articulate why I’m fascinated by them, and that’s where this new series starts.” Seeing the fungi in their finished form, after an intensely time-consuming process, evokes an automatic response much like discovering a hidden mushroom in the forest. That response is what makes Thompson’s sculptures fresh, new and relevant in a sector of art that seems to be losing its audience.

“Maybe someone is moved by the beauty of a generic painting, but for me, where the meat and juice is lies in the thought behind the work, what I can really sink my teeth into. Sculpture for me is processing my world, my environment, my spirit. Right now that happens to be sculpting overgrown mushrooms.”

Before understanding the depth of Thompson’s work, it’s worth a moment to talk about the process behind bronze sculpting because it is intense, to say the least. Through the “lost wax process,” bronze sculptors, molders and foundries create several molds out of different materials before pouring the metals to create the finished pieces. Even after the metal has been poured, there are several more steps that involve highly toxic or dangerous ingredients or techniques to finish it, like breaking off the final mold from the metal, or spraying an acid wash. Some of the work is heavy on chemistry, especially the end stages when the bronze or metal is covered in a mixture of elements to color and texture it, called patina. Many parts of the process share traits of working with ceramics.

For Thompson, most of the mold-making and metal-pouring happened in college, whereas now she uses her energy to create the original oil-clay sculptures that are then turned into molds and poured by professionals who only do those specific parts of the process. Even with outsourcing those segments, her typical timeframe for a piece is between two weeks and six months, where she sculpts and meditates on her sculpting. “My work is a meditation on the ephemeral. It’s me trying to understand time and space and mortality and all that that brings with it. I think at the bottom of all of my work is understanding the temporal. How can I put into abstract form a feeling or a phase of life?” 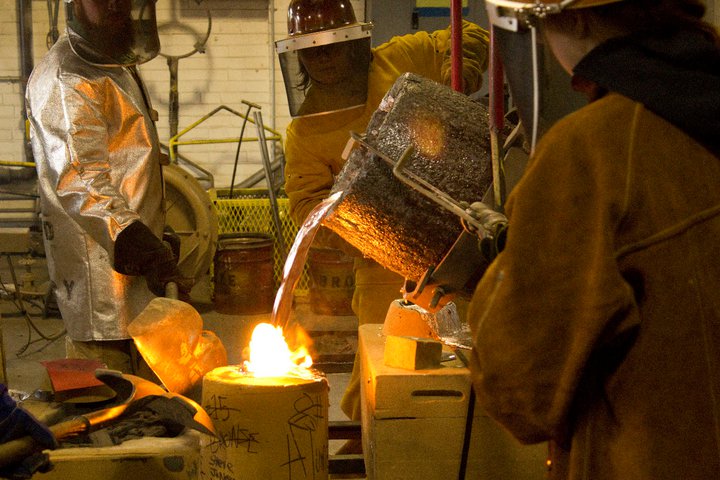 Thompson at the Foundry. Photo courtesy of Margaret Thompson

Though the fungi occupy her currently, Thompson has created other series that juxtapose a feminine mystique with the cold and masculine world of metals. Chrysalis is a body of work that represents a metamorphosis— chrysalises are the pupa of butterflies and moths— and though anyone could be inspired by these natural wonders, Thompson’s portrayal of them seem to embody the very core of being a millennial. This unrelenting feeling of being close to transformation but still bound up by external constraints. Up close you can almost see the outline of a person hoping to spring from within her cocoon.

“The creative element is feminine, but then you have this masculine element of fire and metal and so I fuse those… I believe there is a oneness and the moment something is broken into duality, things are out of balance. It’s funny you use the description of ‘cold’ with metal. That’s how I started as well. [Metal] is the substance that we build buildings out of, it’s so reliable, so strong, it’s got a cold temperature. But then you heat it up and it gets warm and rich and red and you touch it with a finger and it bends. Hot metal is full of life and potential and energy. It totally changed the way I thought about the world— that something so reliable could become so malleable.”

Thompson’s sculptures are more than representations of natural wonders— and mushrooms are certainly wonderful knowing they each have an individualized “spore print,” much like a fingerprint. The sculptures are the culmination of her intriguing worldview, her experiences in the wilderness and her journey toward becoming the best version of herself. Because mushrooms are inherently mortal, even harbingers of decay, and metal is generally considered immortal and permanent, this newest series juxtaposes life and death. In that contradiction, there is a hint of switching sides— life becoming infinite as the mushrooms are made into forever objects and death becoming fleeting as the metal freezes the inevitable process of decomposition. There’s no vanity in her work, which is refreshing for any medium of art. Instead of wanting money for her pieces, Thompson wants to change someone’s mind, or at least someone’s day.

It would not be a surprise to see her showcasing in museums soon. And if she does get that chance, she’s already ready for a big project.

“If I had the opportunity to show in a museum,” she explained, “I would want it to be a multisensory experience. Imagine going into the DAM and there’s a portal, kind of a dark-womb-like space, that brings you into the exhibit. The lights get lower and you hear bird chirps and there’s smells that hit you like moss and grass. I’d have larger than life sculptures of foxes, chrysalis, goats. It’s a little Alice-in-Wonderland-y, in the sense where everything is blown out of scale. So you are now very small in this thing, which is how I feel out in the wilderness. But also because humankind is only a small part of what this world has to offer. And the goal would be to impose a sense of respect and awe in people for their environment. It would be an interesting study in how we relate to our surroundings. I could see that being a life project of mine.”

For now, she’s still working out of her home in the mountains and finding inspiration all around. Not only from fungi and butterflies, but also from Japanese aesthetics, religious studies, women in history and the acts of living and dying. With these in her arsenal, she invokes a sense of natural spirituality that is very present in her work, as well as stoking a desire for viewers to see their surroundings, sculpting and life itself in a different way. 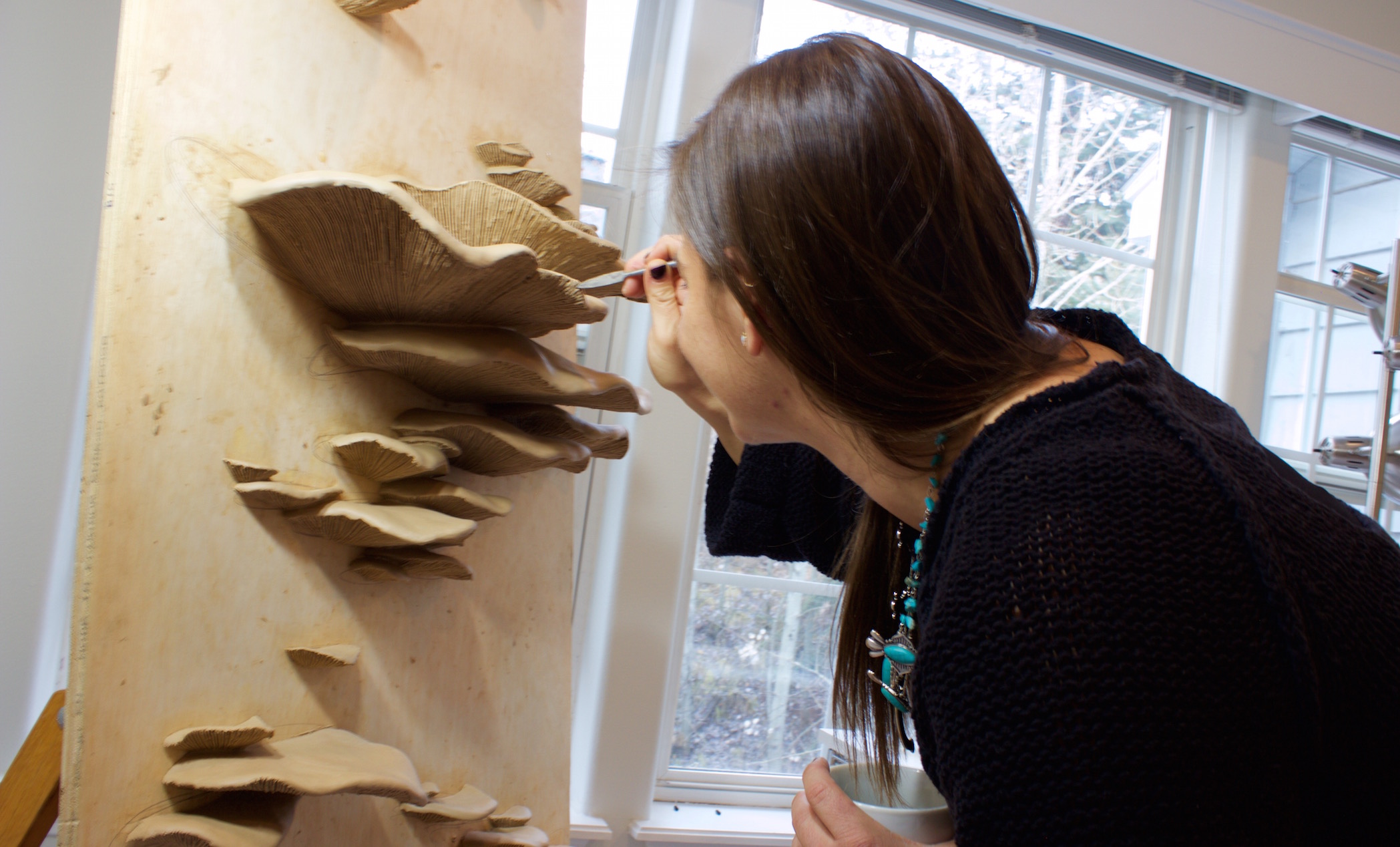 Thompson working in her studio. Photo by Cori Anderson