Review – The Shins and Spoon Made Lasting Memories At Red Rocks

Red Rocks season is rapidly coming to its close, as cooling temperatures infiltrate jackets and breezes sweep through the monoliths, concerts become more inclement affairs than expected. However, Thursday night’s performance featuring Day Wave, Spoon and The Shins offered a reprieve of sorts. Aside from the cold, Red Rocks was a clear yet surreal vision beneath a full moon, warmed by the bands performing beneath it. It was a night of nostalgia and the intoxicating possibilities nostalgia presents — to sing out into the night, dance under the stars and take it all in. 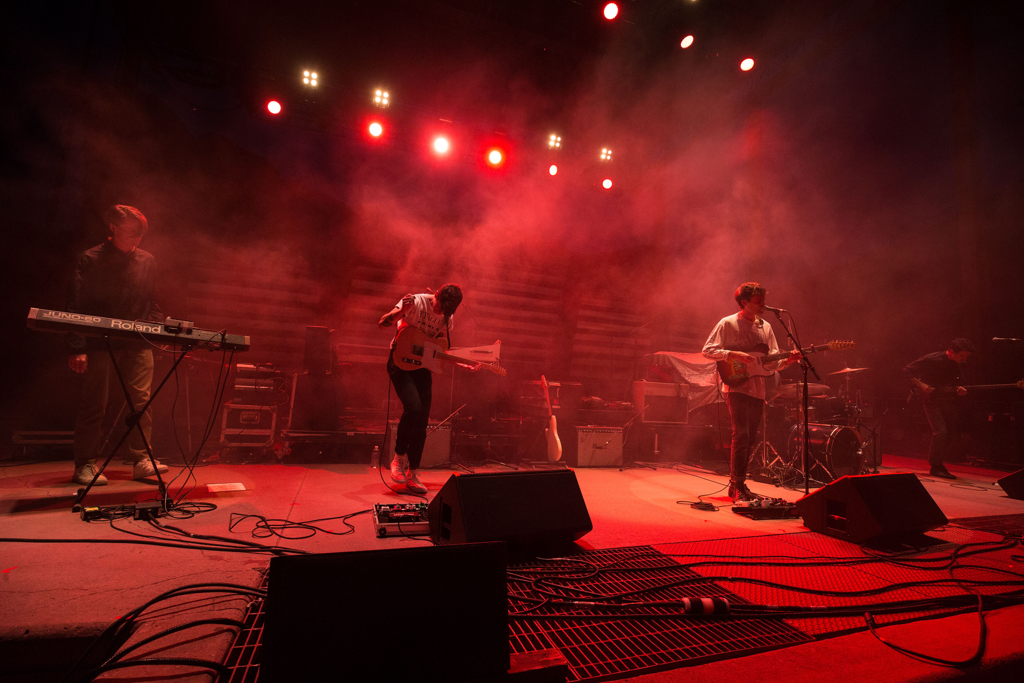 Day Wave treated us to an opening score of sorts, transporting their hazy ocean side vibes to the mountainside. Beginning promptly at 7 p.m., the band’s sound effortlessly washed over the back of the amphitheater down the stairs, trails and accompanying parking lots leading the stragglers into the amphitheater. Although everyone was seated on arrival, there was an amicable silence that had fallen over the audience as they nodded along to Day Wave’s music. It was the perfect soundtrack to getting lost in the moment. The innocuous band left traces of familiarity with the audience, leaving many grasping for forgotten locations where they’d heard the band’s music before. For the time spent reminiscing, there proved to be no better place for a reunion than Red Rocks. 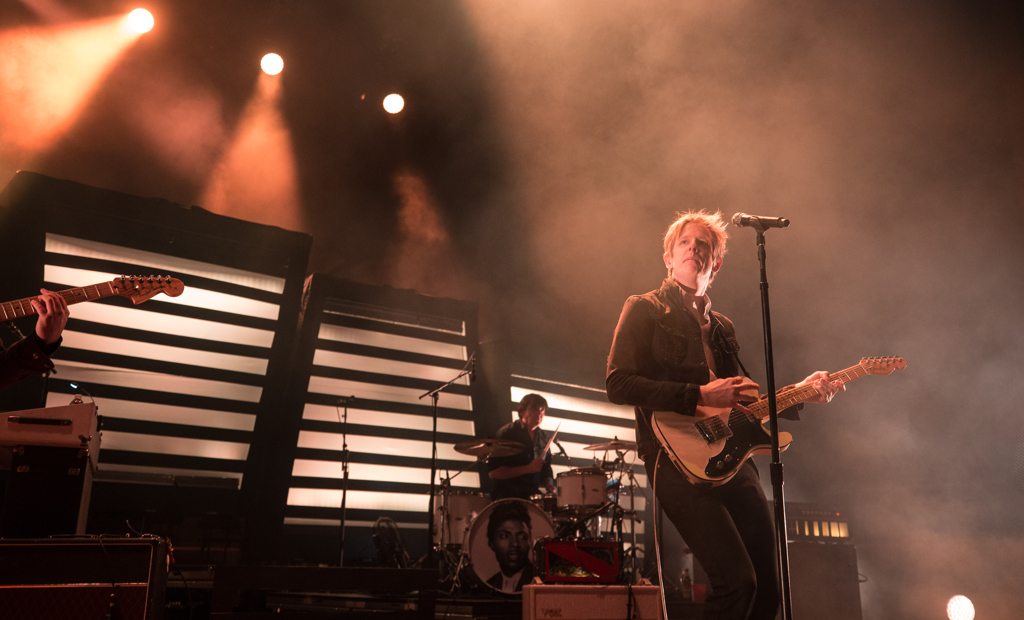 When Spoon arrived onstage following Day Wave’s performance, they effectively ended the sonic daze Day Wave managed to procure. In a blaze of light and sound the band burst into the dizzying “Do I Have To Talk You Into It.” For as laid back as Day Wave was, Spoon was high octane, brash and ever so funky. The crowd at their feet, at this point, grooved through a menagerie of some of the band’s greatest hits, both new and old. From the languid yet confessionary “Inside Out” to the seething “Can I Sit Next To You,” lead singer Brit Daniel sounded sharp with his signature howl and clever in his musicianship. In fact, Spoon performed with the diligence of a craftsman, punctuating songs with perfectly timed drum solos, jam sessions and spotless transitions. As well-rehearsed as they were, Spoon permeated the boundless joy of something far less constrained. Despite not being the headline act of the night, Spoon put on a headline performance and then some. 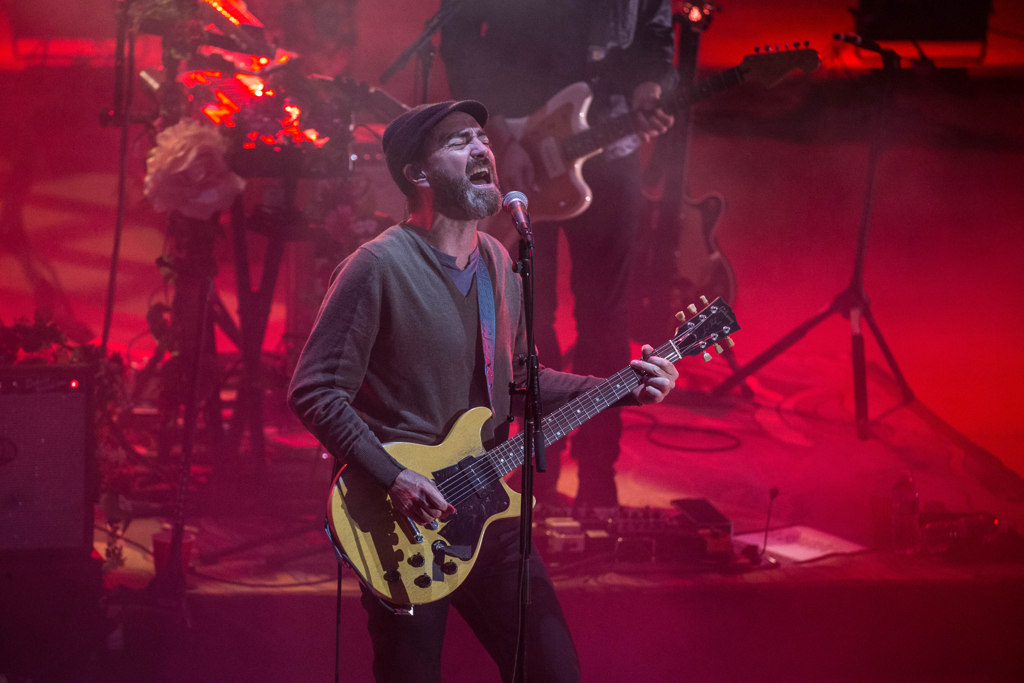 James Mercer of The Shins

Taking over from Spoon, The Shins hit a stage adorned in flowers. From the get-go, there was no question as to how enthused James Mercer was to be playing the venue. Entering the stage to the Knight Rider theme song, Mercer began “Caring is Creepy” without the song even ending. As jarring as the transition was, it was more than made up for by the band’s quick recovery and Mercer’s eager vocals. Being so overtly enthusiastic and positive, it was relatively easy to brush off some of the band’s missteps. One moment, in particular, saw Mercer bookending The Outfield’s “Your Love” with “Girl On A Wing” and “Turn A Square.”Mercer sounded brilliant covering “Your Love,” but when all three songs were mashed together, the result was messy and lost its novelty halfway through.  It refers to the sentence that precedes it

There were, however, far more moments where the band shined than not. On “Australia,” The Shins collective took the audience back 10 years to a focal point in indie rock while sounding not a day removed from its original release. Likewise, on new song “Half a Million,” the band sounded at home in their youthful enthusiasm while also revealing a new side of the band in the process. Regardless of any highs and lows, the audience took everything in stride — slow dancing with loved ones, reminiscing with their friends on times defined by a Shins song and singing as loud as their voices would allow. In fact, on The Shins’ penultimate song “New Slang,” you could hear the unabashed voices resonating from Red Rocks clear across the valley with clarity. If you asked the town of Morrison, I’m sure they’d agree.

All photography by Michael Martin