When first meeting Scott Wilson, you immediately notice his timbre. “You’ll have to decipher the Scottish accent,” he joked. Dressed in a black leather jacket with dark jeans, Wilson’s demeanor resembles that of Tormund’s from Game of Thrones: a Scottish man with a red beard and hair (albeit shorter and better groomed), with the admirable strength, perseverance and integrity to match. He walks with a sense of purpose yet patience — a balance that only comes from someone who has experienced something of a long journey.

Upon closer inspection, you then might notice the slight flush of red to his complexion. You could assume it’s because he just ran inside from his car or perhaps because of the weather outside; it had been one of the colder and rainier days of the week.

To a casual observer, you wouldn’t think much of it. But for Wilson, it’s the result of the daily medicine he has to take for his treatment. In August 2016, Wilson was diagnosed with Stage IV Colon Cancer – the most advanced stage of cancer, with numerous tumors spreading to his liver. “I had 13 centimeters removed from my colon,” Wilson said. He underwent 40 weeks of chemotherapy here in Denver, having just recently been announced NED (No Evidence of Disease) and is cancer free. 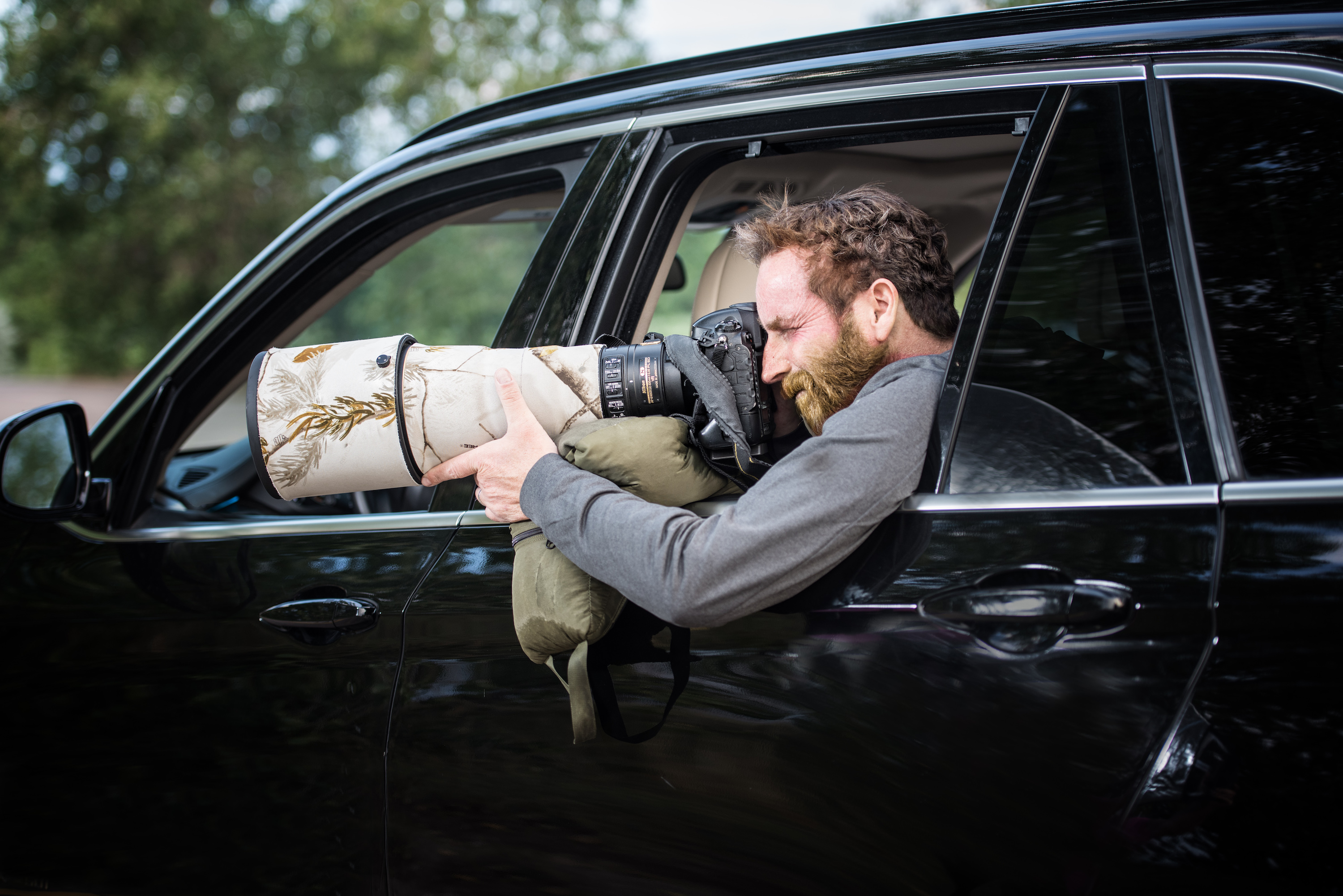 Wilson using the bean filled bag for protection and stability.

Wilson moved from his homeland of Scotland to Denver three years ago for his job working as the vice president of Global Corporate Affairs for Molson Coors. A well-known and established landscape photographer in the UK, he had been nominated for “Landscape Photographer of the Year” four times with his work appearing in various publications including The Sunday Times, Advanced Photographer, Digital Photo and Photography Monthly. He was even recognized among the Denver community, earning a nomination for 303 Magazine’s, 303 Awards “Best Instagrammer” and winning “Denver’s Best Instagrammer” from Westword Magazine in 2017.

“Everything was fantastic, life was brilliant, I had a dream job and then a year later, boom; they found this mass,” Wilson recalled. “I went from ‘Scott Wilson’ to ‘The Cancer Guy.’ Without being consciously aware of it, I found that instantly people were a little further away; they weren’t really sure. It’s a different perspective it gives you on life.”

During his year of chemotherapy, Wilson had two options: he could focus on the treatment and put his work and photography on hold, or he could continue on normally with only slight modifications to his everyday routine. For Wilson, the former wasn’t even an option. “I wanted to present as normal of an environment as possible for my children. Stage IV cancer is a big deal, so if you tell your kids ‘we’re going to get through this’ and then lie in your bed and take a year off, they’re not going to be convinced. But if I can just be as normal as possible, and continue on with my normal day and photography, then the kids have a far better chance in believing that things are going to be okay.”

While Wilson said he would still go to work roughly 70 percent of the time, he had to make more of an adjustment with his photography. Due to the side effects of chemo, Wilson’s skin was severely sensitive to sun resulting in him having to avoid it altogether. As a landscape photographer — let alone a landscape photographer in the Mile High City — avoiding the sun was asking him to avoid his passion; pointless and something Wilson would not accept. “If you take [photography] away from me and tell me I have cancer, that’s like a double negative,” he said. So Wilson readjusted. “I thought well the car is shady, what could I possibly shoot from the car? And then I realized I could actually shoot wildlife quite easily from a car. Suddenly, I was getting to shoot just as much as I had as a landscape photographer without having to risk my skin.” Wilson shot only wildlife through the window of his car, resulting in, “this portfolio of wildlife photographs.”

The portfolio he is referring to is Through the Window, a year-long collection of wildlife pictures taken, well, through the window of his car. And while the car itself didn’t present a challenge when it came to the animals — he said that the animals actually felt more comfortable with a car than a human; the car acting almost like a barrier — he did note that taking the actual pictures from the car was the challenge. And like the past year of his life, it was a learning experience and adjustments had to be made.

“At first, you just roll up, park, stick your lens out the window and think this is going to be easy. But then I realized I needed a bean filled bag that goes over the car to protect it and the lens to give me stability. Then I realized sitting in the back of the car was better because I could sit comfortably and shift from side to side much more easily. And then there are the little things. One of the side effects of chemo is a condition called neuropathy. It’s not painful, just uncomfortable and one of the consequences is your finer dexterity goes. The shutter release was flushed with the camera and I was trying to shoot something and I couldn’t feel the shutter release. I was just pressing a hard bit of metal next to it. So, I put a little paint drop on the shutter release (like brail) and then I could feel the dot.”

The more comfortable Wilson became, the more he began to explore. He typically drove to two different locations to shoot: Cherry Creek State Park for convenience — “It was practically in my backyard” — and then later, The Rocky Mountain Arsenal National Wildlife Refugee because of the “slightly more exotic wildlife.” It was Rocky Mountain Arsenal that Wilson credited to some of his favorite memories and photographs. He recalled a specific image that he said perfectly summed up the past year of his life. 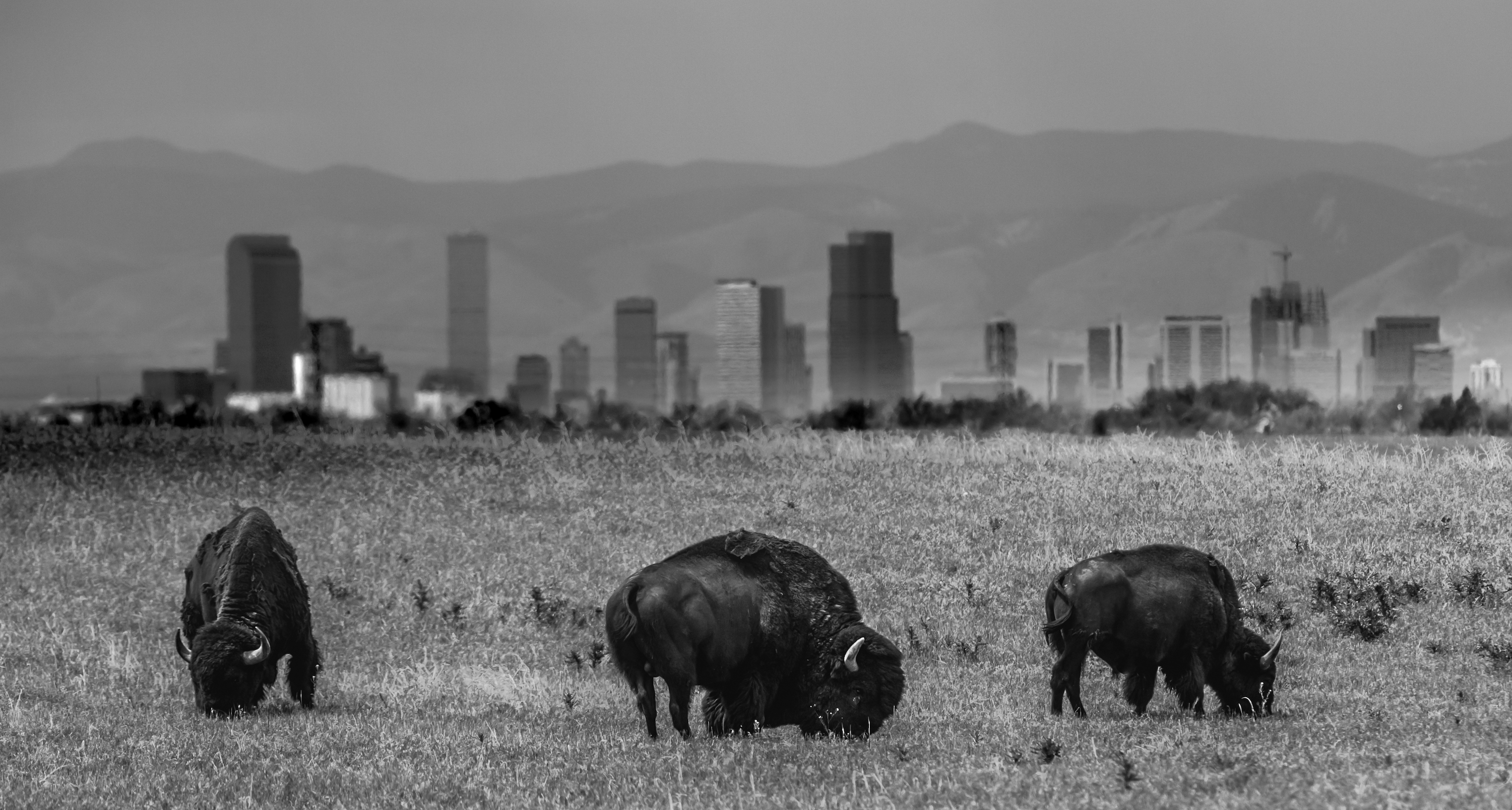 “There’s a view in the Rocky Mountain Arsenal where you have the mountains and the skyscrapers of Denver and if you’re lucky, the odd bison. In the photography world, you have what is known as the power of three: if you can get a group of three of something [in one shot]. I remember sitting watching this one bison in front of the skyscrapers thinking, this would just be perfect if there were three. Then in about 10 minutes, there was two, then in about 15 minutes, there were three. And then I thought, it would be perfect if they just spaced out equally. Then in 10 minutes, they spaced out. And then I thought, it would be perfect if that one just turned a little that way, and within 10 minutes it did. It was almost like it was telepathy. This picture captures everything I love: it has the landscape in the back; within the picture, you can see my office; I can locate my cancer clinic and the foreground there’s wildlife. It was almost like my whole year was in one image.”

When I asked Wilson if he had a favorite animal to photograph, his eyes instantly lit up, his response immediate. “Hummingbirds. They don’t exist at all in Europe so for me, this was a completely exotic animal.” 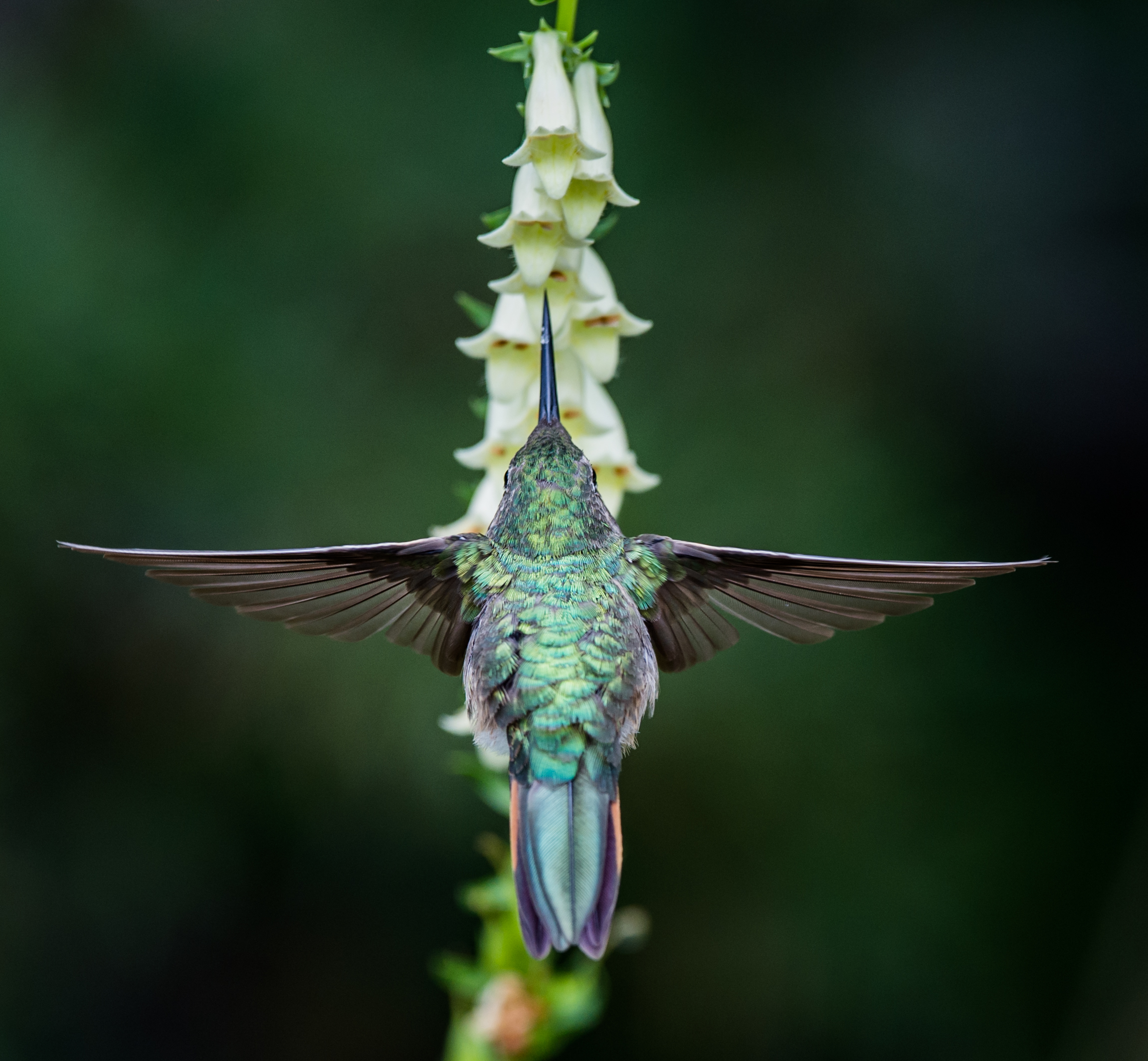 Wilson’s favorite photograph of the hummingbird.

This image, along with countless others taken over the course of the year, are featured in Through the Window: A Photographic Tale of Cancer Recovery. The book, dedicated to his mom who also died of colon cancer, pays respect to her with a simple message: “The Battle is o’re”. Wilson hopes people will decipher what that means for themselves. Within the book’s pages lies a mixture of facts about the wildlife and anecdotes from Wilson on his journey. “I tell my story in the first editorial — about the therapy I found in the wildlife photography, the inspiration that gave me and then it’s linked to the photos.”

The inspiration photography gave him is something Wilson largely attributes to his recovery.

“I would never claim photography made me better, but it certainly gave me the mindset that I was going to recover. I don’t believe that being positive about the whole thing is going to be the thing that cures you by any means; chemotherapy is the most important thing. But with a positive mindset, approach and attitude, it has got to help at least 1% of the time.”

Wilson began the process of creating Through the Window, using Kickstarter – a large funding platform for creative projects. Within two days of putting Through the Window on Kickstarter, they cleared their goal. “Kickstarter was just to get the book printed. At first, I was thinking 500 books. Then we got an order for 500 books, so we went to 1,000. We made more than $25,000 in 12 days.” All proceeds from the book are going directly to the Colon Cancer Alliance.

He also made it very clear that this was not intended to be a morbid book and to read it as such would be doing the book — and the reader — a disservice. “We deliberately didn’t want it to be too “coffee table,” where it just sits there. I want this to be the most leafed-through book in the hospital waiting room. This book is not designed for social media. It’s designed for that hour when you’re sitting in a waiting room. You can look at it like Through the Window of Scott’s lens and just appreciate the wildlife or you can look at it like the need to keep our windows clean through life and manage cancer and illness.”

When asked if he had any advice for those going through a similar situation, he said said it wasn’t what one did with their time, but it was who they spent it with. “Take a chance to do something new with your loved ones. Do something together. Take advantage of that time. I know how dark it can be. But try not to wallow in it. You’ve got to think beyond that and keeping life as normal as possible and positive as possible. Whatever your hobby is, just do it more. Indulge yourself.” Wilson also urges anyone who has a family history of colon cancer or overall general fear, to go further to be sure and get screened. Whether it’s because he’s a cancer survivor and knows the hardships that are faced, or because he’s personally been affected by this specific cancer, Wilson speaks with more conviction in this plea than anything else throughout our whole time together.

As our interview was coming to a close, with Wilson on his final remarks, I wondered if he would continue the Through the Window concept and turn it into a series. I asked him such and he responded that it wouldn’t have the same truth which was the “impediment of the illness.”

“Do you know that Volvo invented the seatbelt?” He asked me. I didn’t know that, but it seemed about right. “They didn’t patent it deliberately because they said it was too important and everyone needs it. If anyone else can help solve something to do with cancer and has a project like Through the Window and thinks people can benefit from it, then they can have it.”

Wilson is now launching a Through the Window Facebook group for a cancer support community for artists and art lovers. “We’re going to have a page where you can buy the book. Our official launch will be at the Colon Cancer Alliance Conference on November 1. The Facebook page will launch mid-October.“

This article will be updated when the Facebook page is live and books are available for purchase.