Emmerson Hits Boulder with Focus on Pasta, Pastry and Partnership

If you’ve already read anything about Boulder’s newest restaurant, you likely have the same question that we did — what is a neo-bistro exactly? Well, Emmerson is here to define it in Colorado — operating in a class all its own on Pearl Street.

“We were searching for a term that best encapsulated what we’re doing here, and neo-bistro was definitely that term,” explained owner and partner Ben Kaplan. “It’s where you take a Michelin-starred chef out of the confines of fine dining and white table cloths and into a setting that’s more relaxed. They still apply the same technique, rigor and focus to the food that they’re executing, though. That’s what we’re hoping to achieve here.”

You can experience it for yourself when Emmerson opens this Thursday, August 24, but here’s a quick preview into all that Emmerson entails. 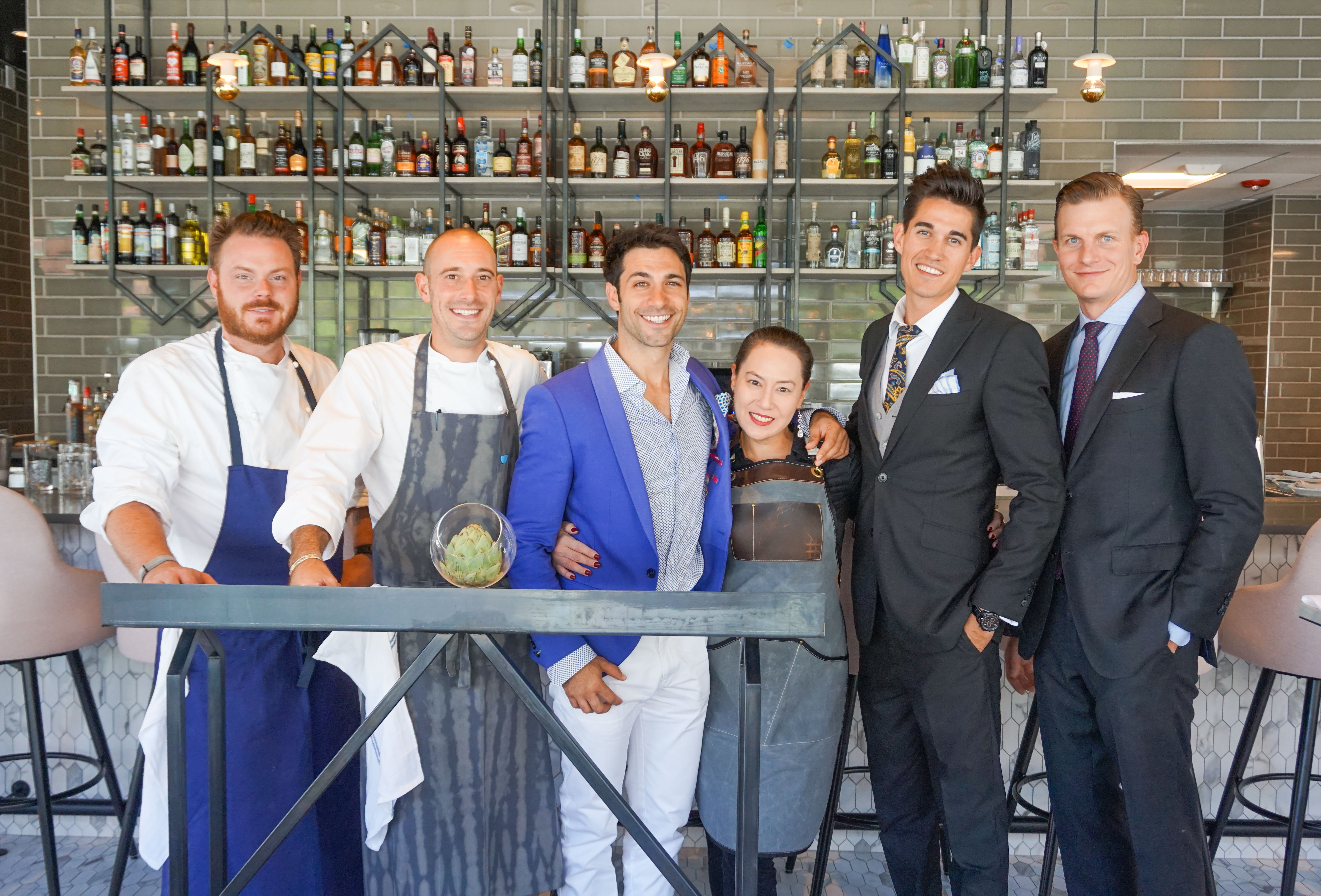 Kaplan — an investor in other Colorado restaurant projects such as Oak at Fourteenth and the Source Hotel — assembled a star-studded repertoire of restaurant experts to execute this concept. At first glance, it’s easy to write this partnership off as one with too many cooks in the kitchen, but, after meeting with the team, it’s clear to see that it’s more than that.

“My job is to build a team, create culture and empower this amazing group of individuals to make Emmerson the best it can be,” Kaplan said. “This had the potential to be filled with a lot of big egos, but it’s a truly collaborative process. I don’t think it would have worked any other way.”

The combined resume of this team of five partners — six, unofficially, if you count cocktail expert Nancy Kwon — is impressive, to say the least.

Executive chef Michael Gibney has an academic background in painting and writing from the Pratt Institute and Columbia respectively. His thesis was even published by Random House into a book called Sous Chef: 24 Hours on the Line, which was named one of the 10 best non-fiction books of the year by TIME magazine in 2014. All the while, he was conquering the culinary world, leading a team of 84 at Tavern on the Green in New York City at only 23 years old. Executive pastry chef Jeb Breakell has the specs to match. He’s worked in some of the nation’s most notable restaurants — most of which are Michelin-starred — including Eleven Madison Park, Per Se and Atera. Rounding out the team of partners is beverage director Ben Foote and general manager Tre Gerbitz with combined restaurant experience in New York City and Boulder.

After Kaplan convinced the team to relocate to Boulder, all five of these men piled into his five-bedroom house near Chautauqua Park, where they spent a couple of weeks testing out recipes and ideas for Emmerson — even settling on a name together.

Each member of this partnership has expressed a deep appreciation for the unique, collaborative opportunity before them.

“It’s rare to have a say in everything, from the design to the menu,” Gibney explained. “It definitely wouldn’t have happened in a place like New York City. My broad background comes with a lot of interests. Restaurants are a great outlet for most of those, but if I’m stuck in the kitchen all day I feel like I’m not being used to my full potential. This was an opportunity to be involved in the entire process.”

Emmerson will be open all day — every day — from 7 a.m. until midnight or later. The space lends itself well to that, transitioning from a marble-topped pastry counter in one corner, to a more private, cozy dining space in the next. In the middle sits a 20-foot community table, which Kaplan calls the “energy center for the whole space.”

“I really like to take on existing spaces,” he said. “Finding a place with really good bones and a really good soul; I know this sounds cheesy, but I like to listen to the space and let it tell me what it wants to be. This wanted to be an all-day concept… It was just dying to be a cafe.”

With large windows surrounding the space and light colors throughout, it’s a calm atmosphere that contrasts with the entrance — a quirky, transformed space that Kaplan said morphed from a “corporate-looking vestibule to a Curio Parlor.”

“Oftentimes the things that are the biggest hurdles become the most defining feature,” Kaplan said. “We were going to need a permit to get rid of the entrance, so we kept it and created this beautiful transition from your busy life into this experience you’re about to have.”

The team added black and white tile and shelving full of trinkets they’ve all gathered throughout the years to fill them. It even has a dedicated soundtrack playing on a victrola. Other added quirks add character to the otherwise classic space, including coat hooks shaped like hands in the back and a small private dining space lined with a custom, kitschy Brooklyn-themed toile wallpaper.

“We want to make people curious, but we also want to delight them,” Kaplan said. “Everything in this project is so deliberate and on purpose. We were very specific about the choices we made.”

This collaboration extends even deeper into the kitchen. While in most restaurants dessert and main courses can be kept separated creatively, it’s not the case at Emmerson. Gibney and Breakell are still roommates and collaborate on every dish that comes out of the kitchen.

“Our food compliments each other well. We have a similar sense of how things ought to be done and how food should taste,” Gibney said. “Everything I make, I want Jeb to taste and I want him to like it. If he doesn’t, I feel like I’ve failed him and the rest of the team. He’s the same way.”

If “neo-bistro” doesn’t make the culinary style clear, we’d define the food the restaurant is creating as thoughtful. There are separate menus for breakfast, lunch, dinner and brunch, with a focus on Kaplan’s two “non-negotiables” — pasta and pastry.

The portions are light, but the flavor is not lacking. We couldn’t get enough of the Guanciale Carbonara ($18) with perfectly cooked, house-made bucatini and the ember-cooked beets ($10) with fresh cheese, dill cream, smoked trout and toasted poppy seeds.

This attention to restraint and lightness allows guests to save room for dessert — which, with Breakell’s background, you’ll want to. His desserts are nothing short of works of art, from the Blueberry and Cucumber Sorbet ($13) with elements shaped like the Flatirons to even more creative combinations like the dessert that blends strawberries, black olives and basil.

Kwon, leading the bar program at Emmerson, is a force to be reckoned with in more ways than one. Working with a team of five male partners is nothing new for Kwon; she’s worked her way up in a male-dominated industry all her life.

Kwon brings her own list of accomplishments to the bar. She has been named one of the top-five bartenders in the country by Craft Cocktails America, noted for her playful style and command of unique ingredients.

Perhaps Kaplan said it best — “This is far from beginner bartending, this is some seriously advanced shit.”

Nothing on the Emmerson bar menu is like anything you’ve ever tasted, because Kwon’s cocktails are 100 percent original, with no basis in traditional styles that you’d recognize. She attributes her deep appreciation and understanding of cocktails to her martial arts upbringing.

“I was taught if you want to be the best at anything, you need to know everything else that surrounds it,” she said.

Each cocktail is a sensory experience, they’re even paired with a playlist Kwon made through a QR code on the heavy-metal designed bar menu. She has herbacious, almost vegetal options and others that taste more familiar with a twist. Our favorite — the Zoom Zoom Zoom — has themes deeply rooted in Brazilian culture and caffeine. She incorporated all energy-inducing ingredients, even one that leaves a little buzz in your mouth.

“I want the cocktails to be similar to everything else we’ve done at Emmerson,” Kwon said. “It’s everything you’d expect turned on its head.”

Emmerson is located at 1600 Pearl Street, Boulder. It will be open every day from 7 a.m. until midnight.

All photography by Alexandra Palmerton.