As the dust settles in Charlottesville, Virginia following violence and chaos at a white supremacist rally, the country continues to grapple with reality that neo-nazism and KKK rhetoric is alive and well. With tensions in North Korea peaking along with other issues on our minds, community discourse was needed. Thus, it was an appropriate time for Senator Cory Gardner (R-Colorado) to call three town hall meetings across the state this Tuesday — the first he’s held in over a year.

In the Lakewood meeting, the last and largest of the day held at Colorado Christian University, tensions were high. We sat in for the action. 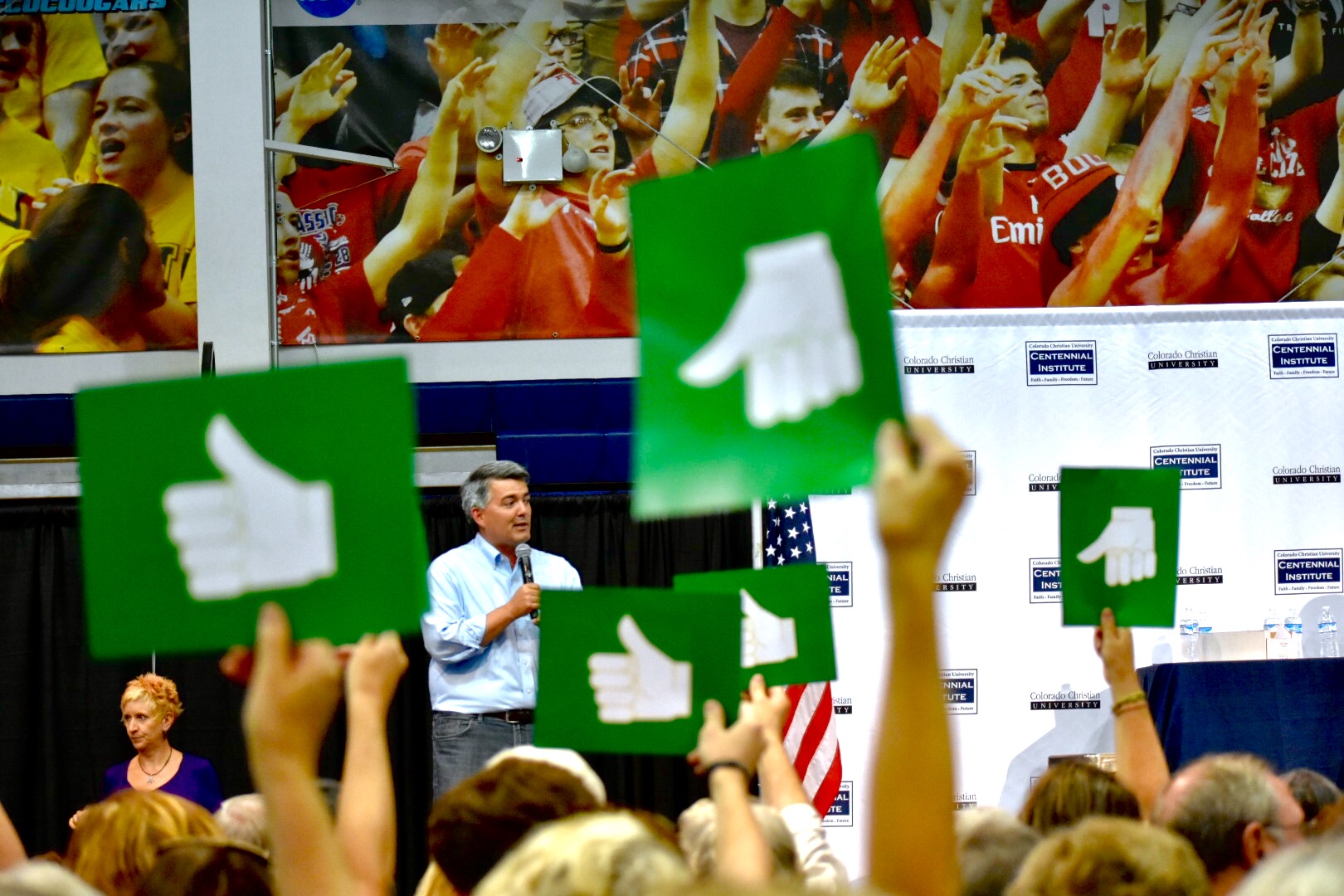 Folks in attendance held with them an assortment of cards — mostly the green-thumbs-up, red-thumbs-down ones, as seen above (in this photo, the red-thumbs-down side is being flashed at the Senator in disagreement). There were also signs that literally said “agree” or “disagree,” others that showed support of Deferred Action for Childhood Arrivals popularly known as DACA and some that were homemade with more personal messages.

The green side of those thumbs up cards were flown proudly when Gardner began the evening by denouncing the white nationalism, racism and violence that took place over the weekend in Charlottesville. That would be one of the few times the crowd showed much support throughout the night. 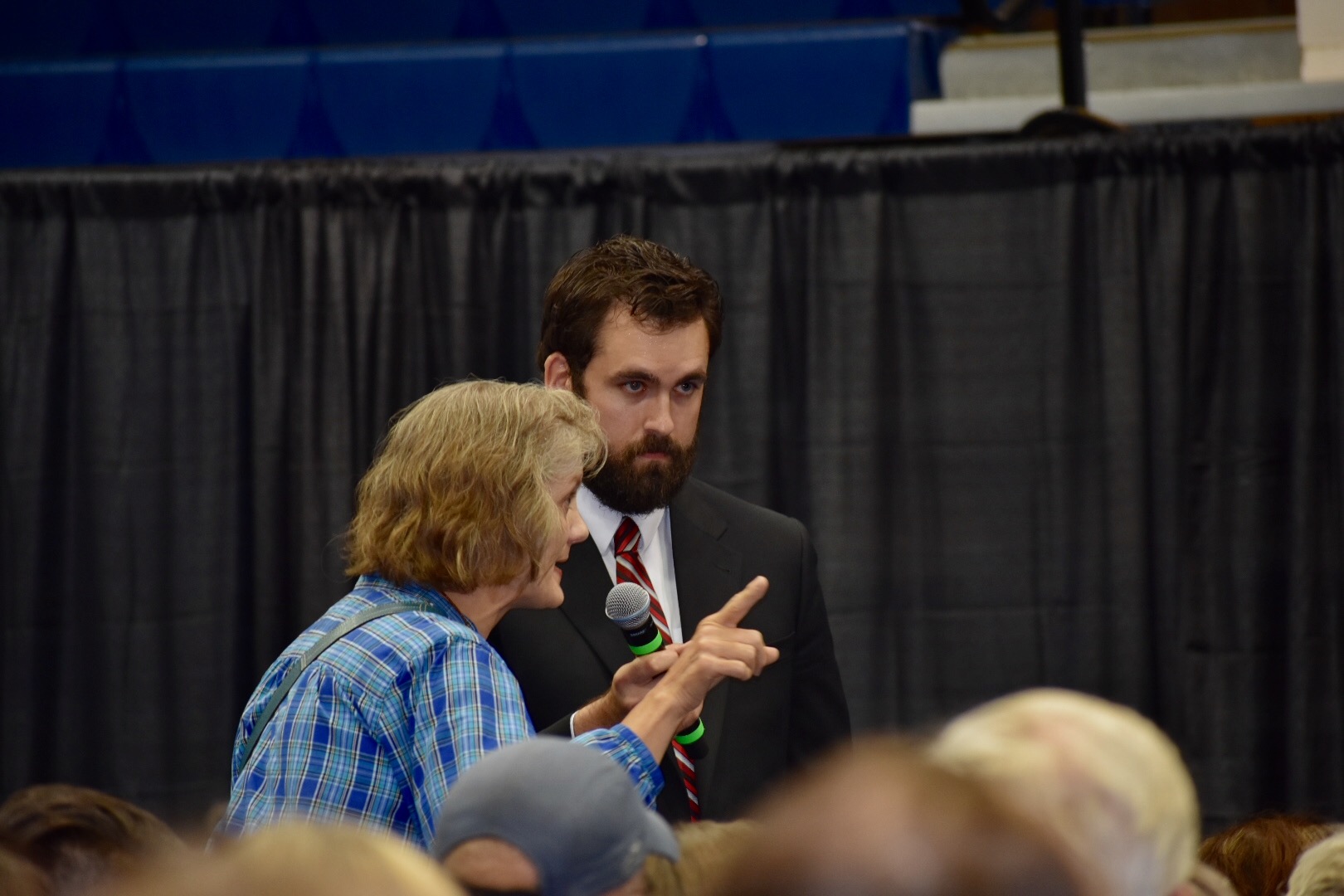 A community member, seen above, urged Gardner to demand that Trump fire the alt-right members of his cabinet in the wake of the violence in Charlottesville. “If you don’t demand that, your words (denouncing the violence) are meaningless,” she said. Gardner responded — to the crowd’s dismay — that the matter is the president’s decision. He added to this later, following a similar question, saying that although there’s no room for racism or hate in our country, the president controls his own staff. 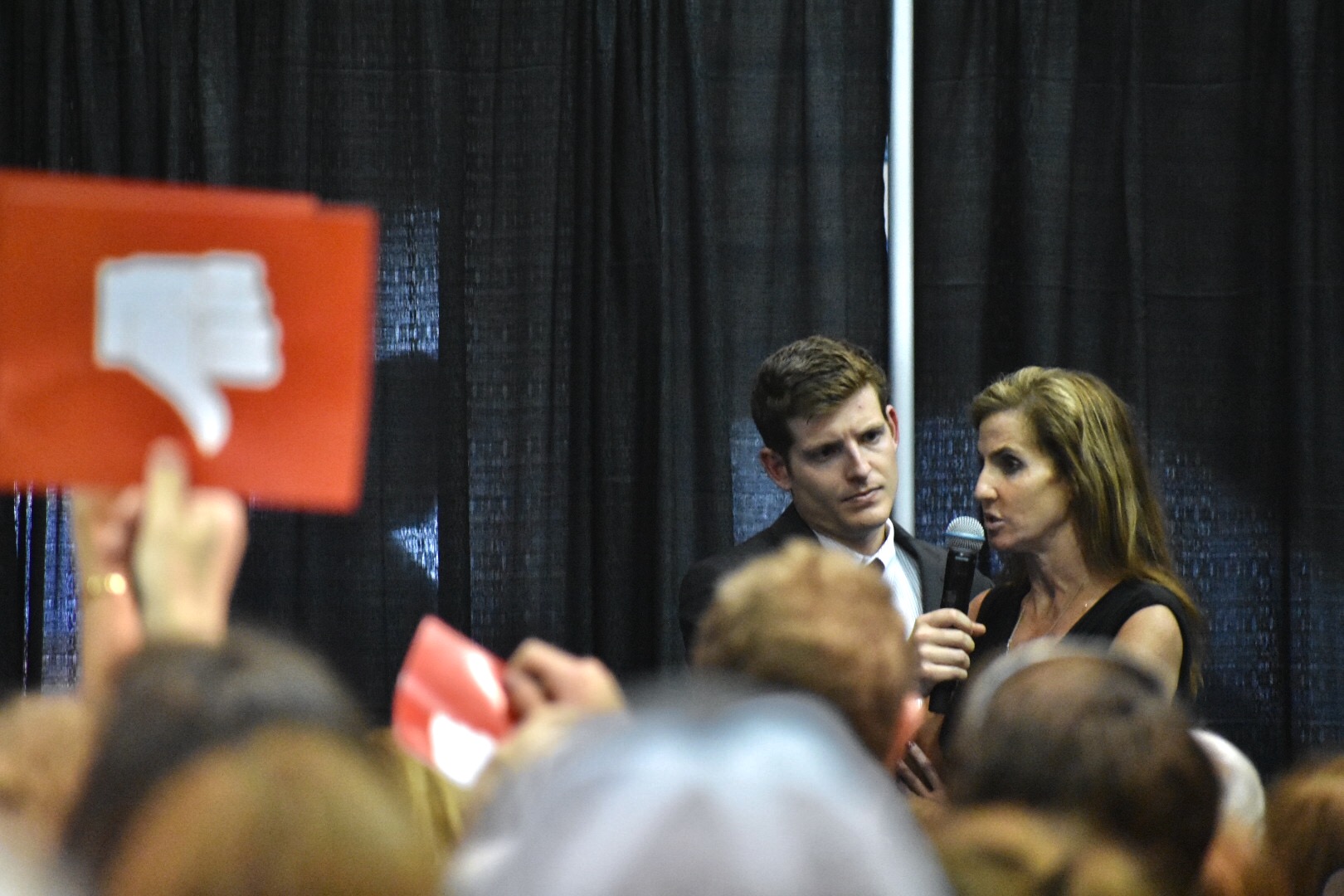 Questions continued to have the same themes: white supremacy/nationalism, health care (and the future of Medicaid and the Affordable Care Act), renewable energy and tensions with North Korea. Gardner didn’t seem to wander much from his stances, thus none of his responses to questions were surprising. The crowd was rarely pleased, and often complained that the senator wasn’t actually answering the questions being asked.

Some his responses did seem unclear or incomplete but often times they couldn’t even be heard — the crowd was very vocal in their disapproval, often making it difficult to hear what Gardner was saying. The energy was high, but far from positive in what appeared to be a majority liberal crowd. Apprehension, concern and disproval could be felt in the atmosphere. At one point, a man shouting about health care had to be removed from the venue. 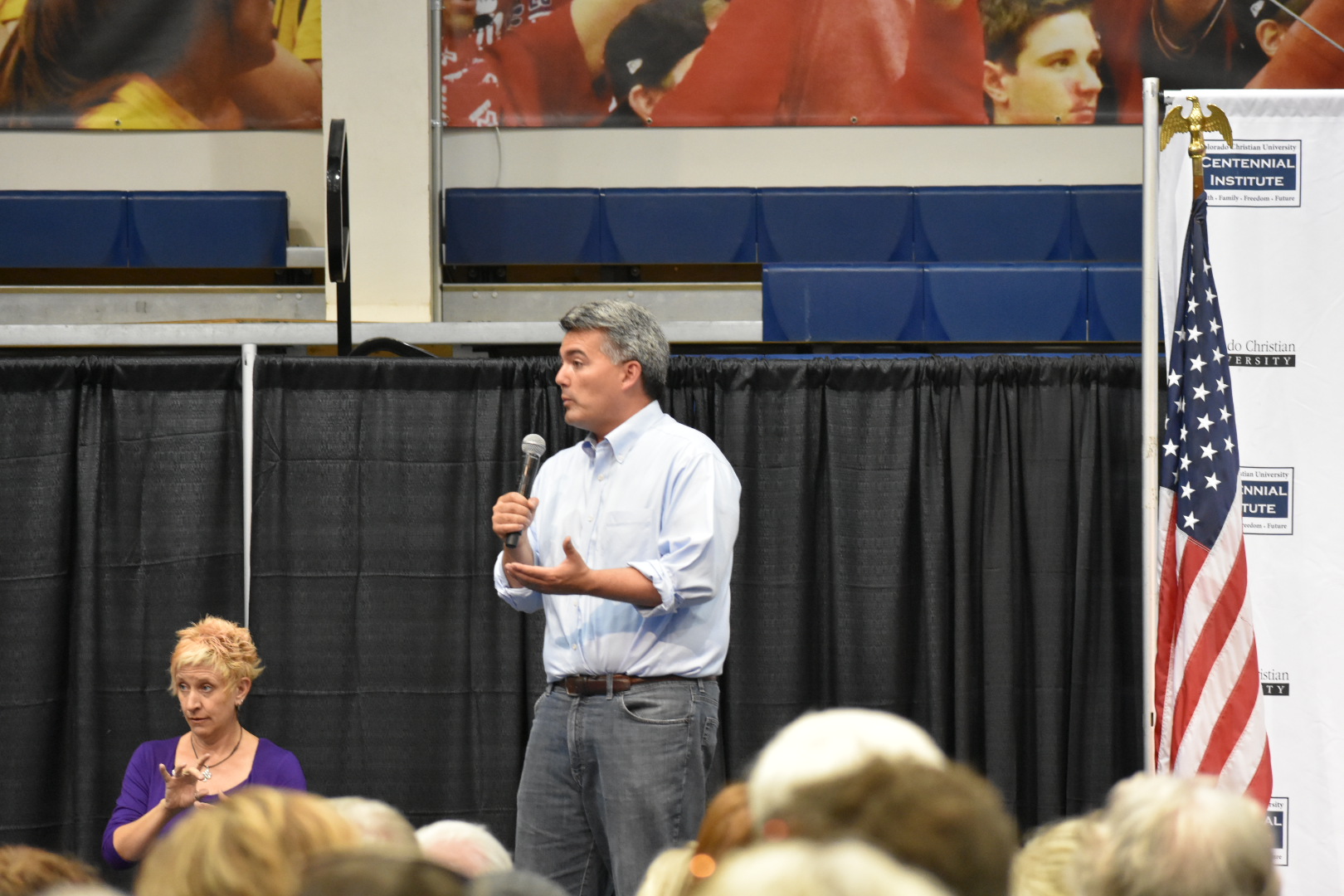 While these town hall meetings are important — and seemingly rare — this one felt more like a necessary release of anxiety and aggression rather than productive discourse from either side. The senator repeatedly stated his desires to find “bipartisan solutions” to many of the issues that were discussed, but it seemed to be more of an idea that floated away and disappeared than really stuck with anyone. One attendee asking a question said that they didn’t feel proud to be an American. Others agreed. 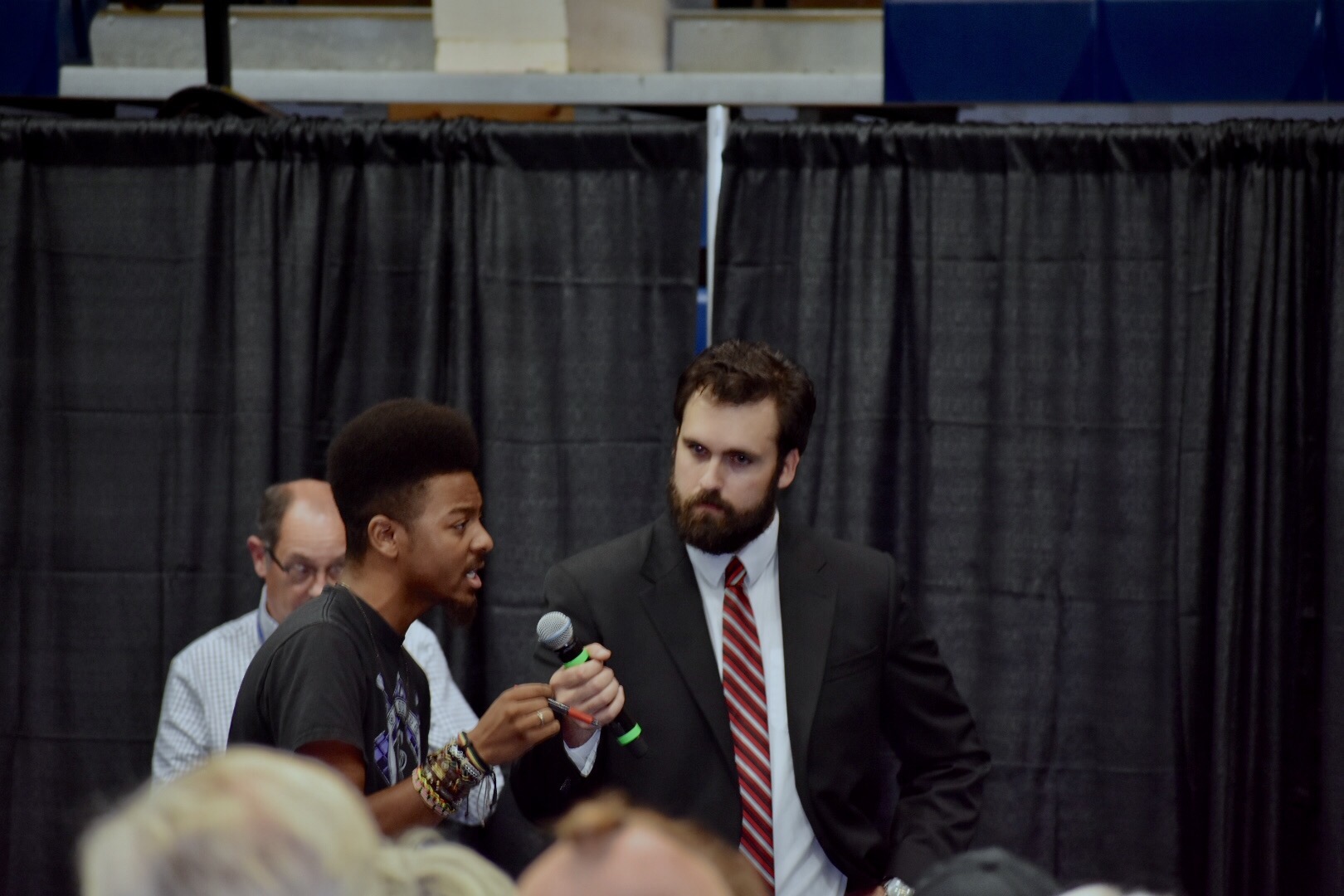 The meeting ended pretty abruptly, right at 5 p.m. as promised — but not before a Trump/Pence flag could be carried through the venue by a few of the president’s proud supporters. When exiting, community members were met with more Trump supporters waving campaign signs and American flags. If anything, the town hall demonstrated that the definition of patriotism is complex, and we’ve got work to do to figure out what we take pride in — as well as how to change what we don’t.

All photography by Jonina Diele.