The Colorado Burlesque Festival is on hiatus this summer (and will return next year), but Denver audiences won’t feel denied as they are in for an epically-proportioned burlesque show this July. The one and only Dita Von Teese is bringing her show, The Art of the Teese, to the Fillmore Auditorium on July 20. Von Teese’s last touring show, Strip, Strip, Hooray!, enjoyed a very long, successful run and now she is maintaining that same spirit in a whole new package with The Art of the Teese.

While Von Teese may be the world’s most well-known modern burlesque performer, she will be sharing the stage with some of the most diverse, innovative and skilled burlesque performers around. For the West Coast leg of The Art of the Teese‘s North American tour, Von Teese will be joined by Dirty Martini, Ginger Valentine, Jett Adore, Zelia Rose, Violet Chachki, Alek Palinski and Elio Martinez.

The Art of the Teese will be the first time the burlesque icon has brought one of her shows to Denver. “I’ve been trying for many years and this time it worked out, so we’re very excited to bring the show [to Denver],” Von Teese said. 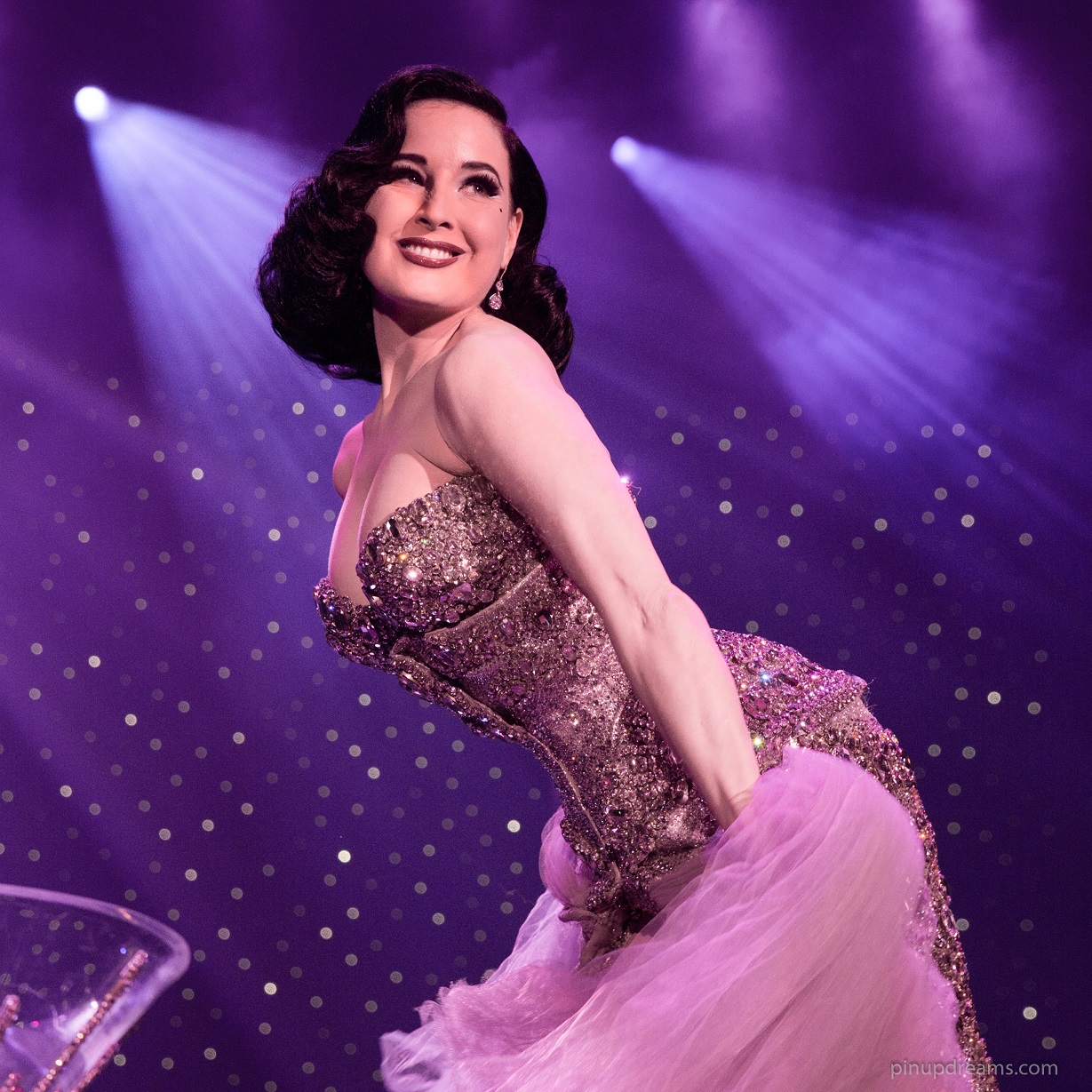 “Always, the important thing to me is to cast [the show] with wonderful, modern burlesque performers that really bring the house down every time. So I’m always scouting out really incredible burlesque performers that I think stand for multiple facets of burlesque,” Von Teese said in an interview with 303 Magazine. In order to create a two-hour evening of rhinestone and tassel delights, she has compiled show-stopping acts from burlesque artists from all over the world. Von Teese strives to showcase all that burlesque has to offer in her shows. 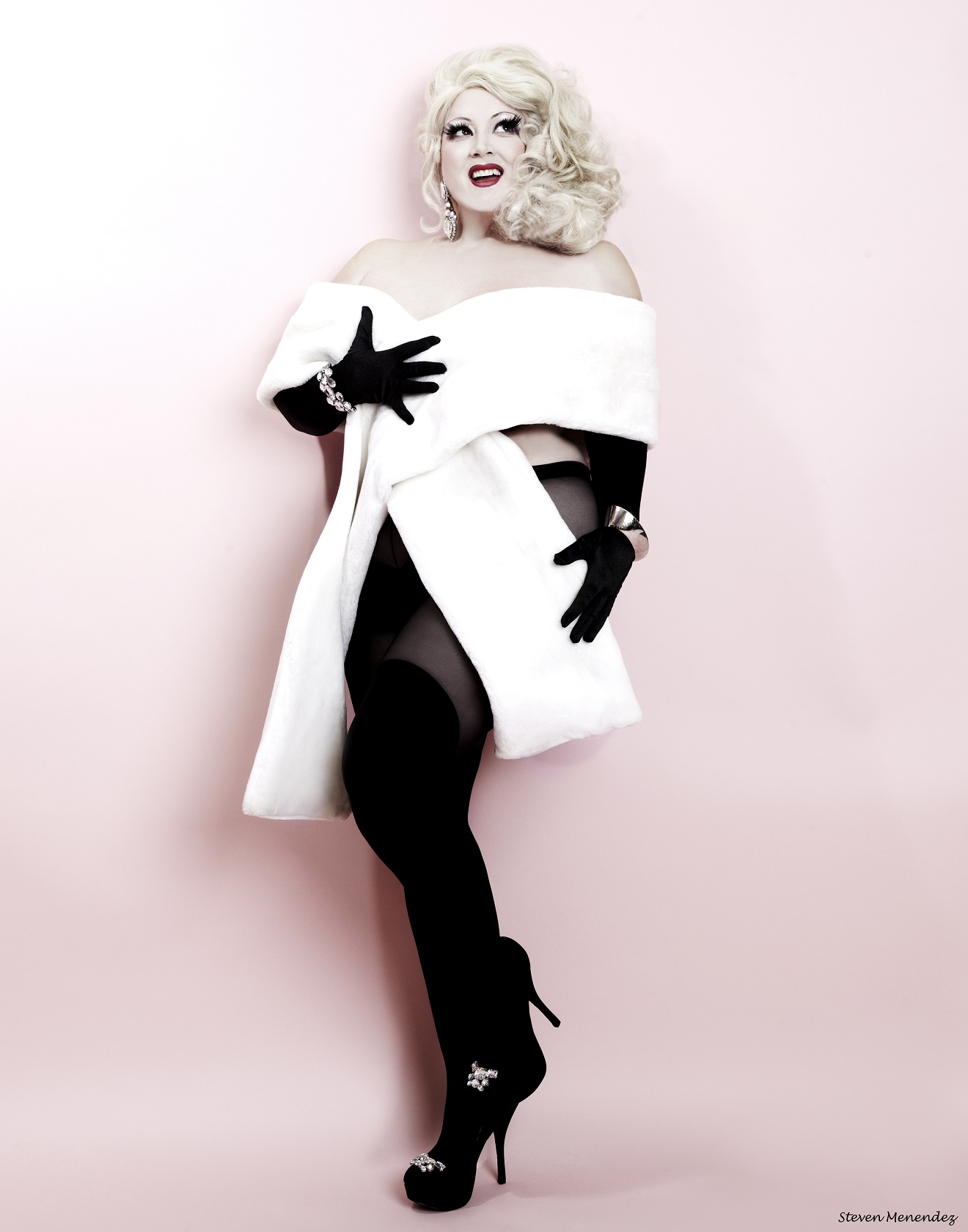 Dirty Martini is just one of the many burlesque artists featured in The Art of the Teese. Having toured with Von Teese four years ago with Strip, Strip, Hooray!, she is excited to make her Denver debut performing alongside Von Teese again. “The show really is the quintessential classic burlesque review for this generation,” Martini said.

She not only values the opportunity of performing with an icon like Von Teese, but also the opportunity to make burlesque seem accessible to all women of all shapes and sizes. “They can imagine themselves up on stage when they see me. There’s something extremely uplifting about seeing different types of bodies up on stage. Many people have never seen a curvy woman in such an exalted way and they have such strong reactions to it,” Martini said. 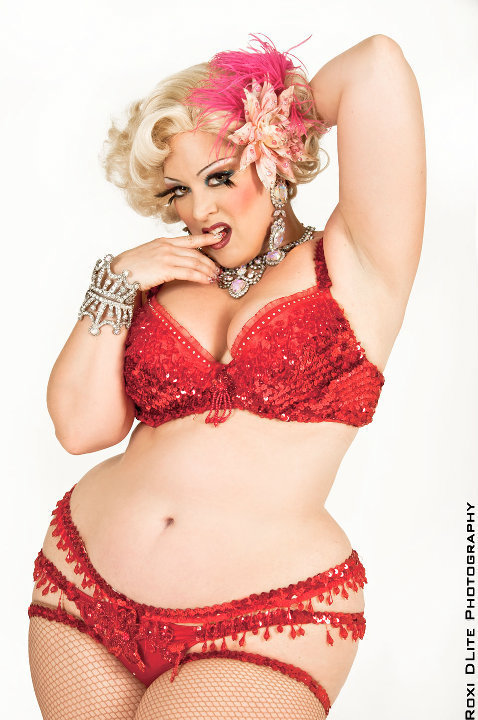 Martini embodies both diverse beauty qualities and out-of-this-world performance skills. She is credited with spearheading the new burlesque revolution in New York City and all over the globe. Martini brings vintage glamour into the 21st century by emulating the iconic burlesque dancers of the 1950s, such as Jenny Lee and Zorita, while showcasing her curvaceous figure and classically-trained dance skills. For The Art of the Teese, she will entertain Denver audiences with her signature raunchy glamour that recalls the golden age of burlesque as she performs a newly created act on one of Von Teese’s iconic props — the carousel horse.

“Since Von Teese and I are so different, I will be approaching it in a very Dirty Martini way,” Martini elaborated. As a pioneer for body-positivity, Martini is excited to be a part of what she calls, “The best burlesque road show that exists.” She is also looking forward to hearing the Denver audience’s reactions first-hand as she loves to greet audiences after the show. 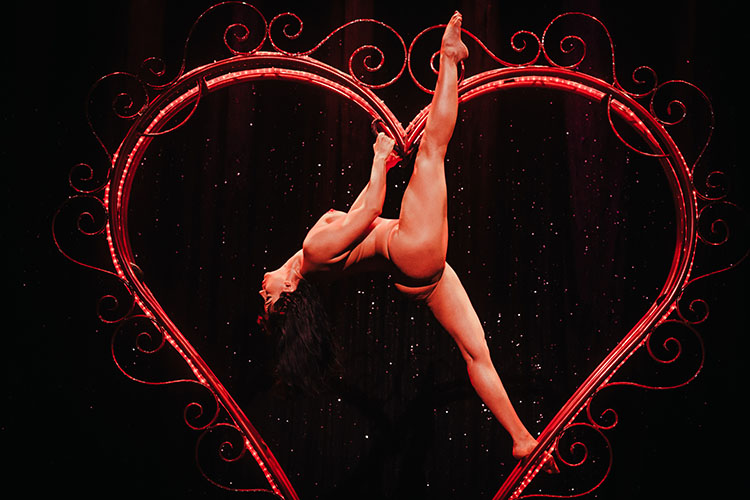 “It’s made out of wrought iron. It’s very beautiful, it has lights in it. To be honest, I created this act and I just found that I didn’t feel athletic enough for it. I did it for a few years, this act. It’s been photographed for my first book, and I always loved it. But, I kind of had a moment where I felt like, ‘Oh, I think this could maybe be better with someone a little bit more athletic in it.’ So I put Valentine in it. She’s just amazing,” Von Teese elaborated. 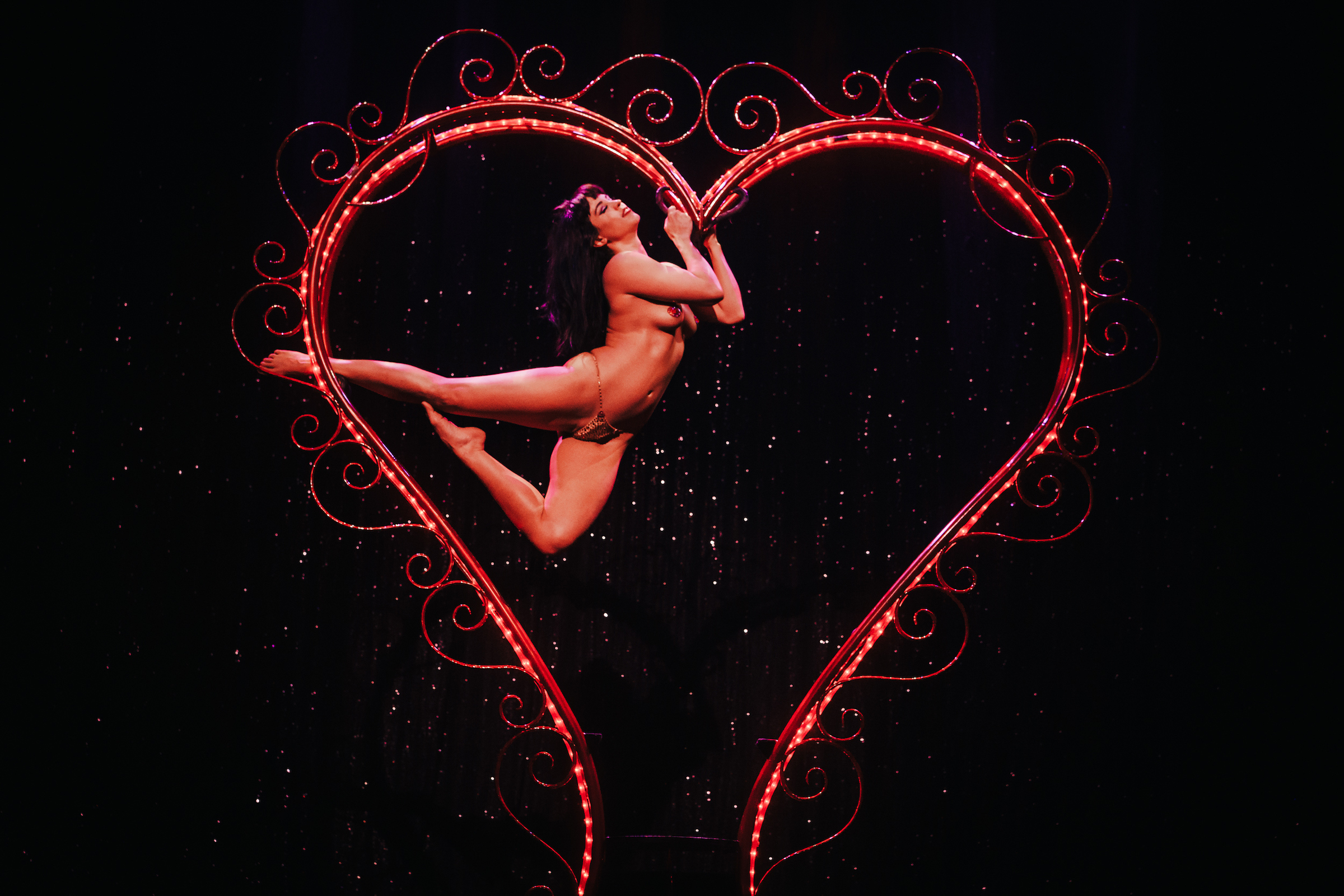 The athletically sensuous Valentine, originally from Dallas, Texas, returns to Denver for her 10th performance in the Mile High City with The Art of the Teese. Previously, she has performed at The Clocktower Cabaret and is looking forward to returning to Denver not only to perform, but to indulge in one of The Market at Larimer Square‘s signature spring fling cakes.

Valentine will be bringing her award-winning blend of classically raucous bump-and-grind burlesque to The Art of the Teese as she performs on Von Teese’s heart prop. “The prop is an incredible, eight-foot metal heart with lights and a 1957 Chevy paint job in candy apple red. I perform the act in my own way, but with a lot of influence from D’Lish and Von Teese,” Valentine said. 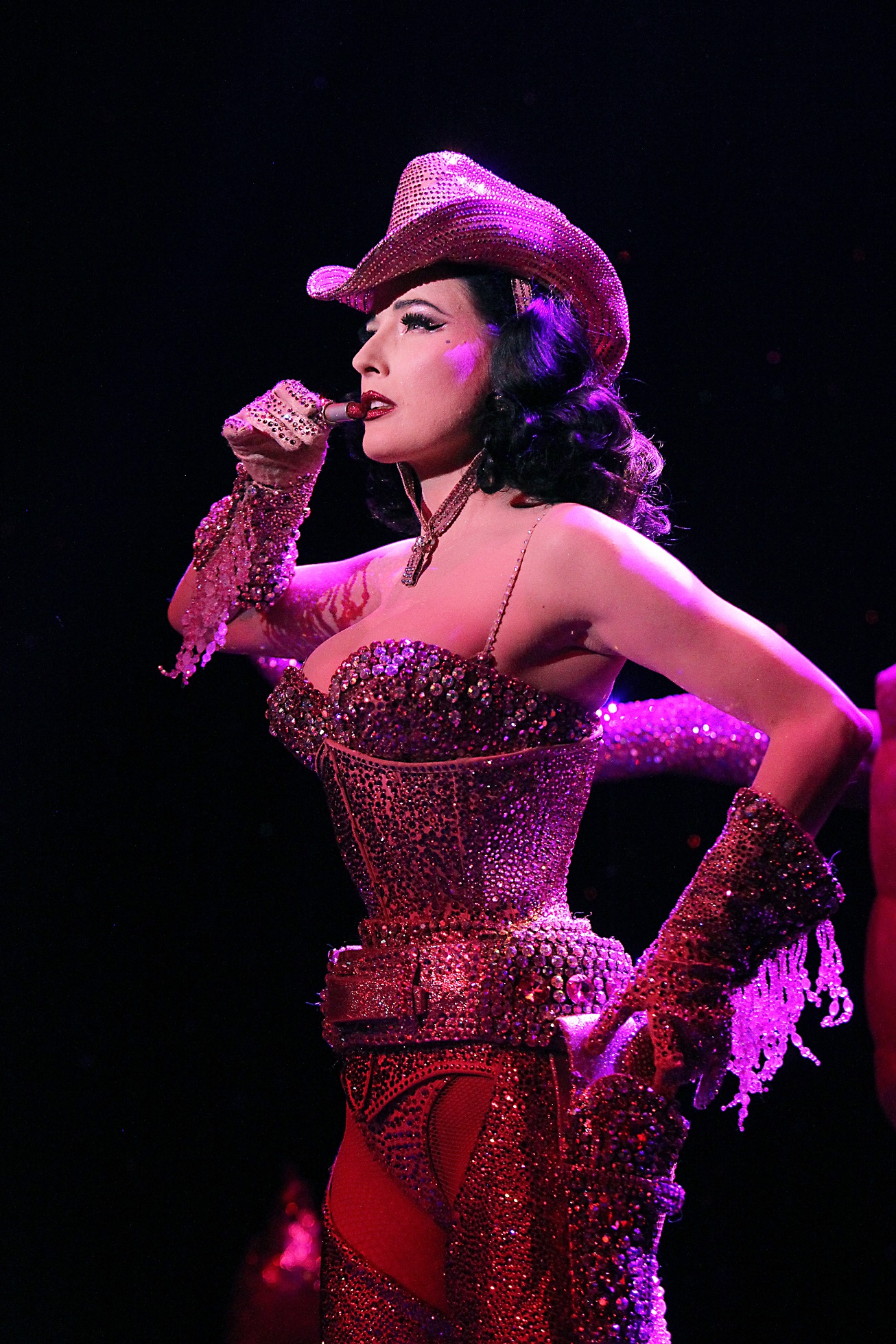 “D’Lish and I worked together to choreograph the act for me and my capabilities with my own music. Having said that, there are a few poses and moves specifically from Von Teese’s show that I perform as well. I had to do a lot of push-ups and pull-ups to get ready for this show. The first two weeks, I was sore and bruised, but my ballet training endowed me with a special type of masochism when it comes to my training,” Valentine continued.

Not only will Valentine be performing on Von Teese’s original prop, but she will also be bedecked in Von Teese’s own costume originally worn by the burlesque icon, herself, and created by D’Lish. “I don’t know how many stones are on it, but that sucker is definitely heavy. I have to change the way I move a bit to accommodate for the weight,” Valentine said.

Valentine is incredibly honored to be donning Von Teese’s original costume in her recreation. “I’m not willing to discuss how much time I spent in the mirror when I put it on for the first time,” she stated. 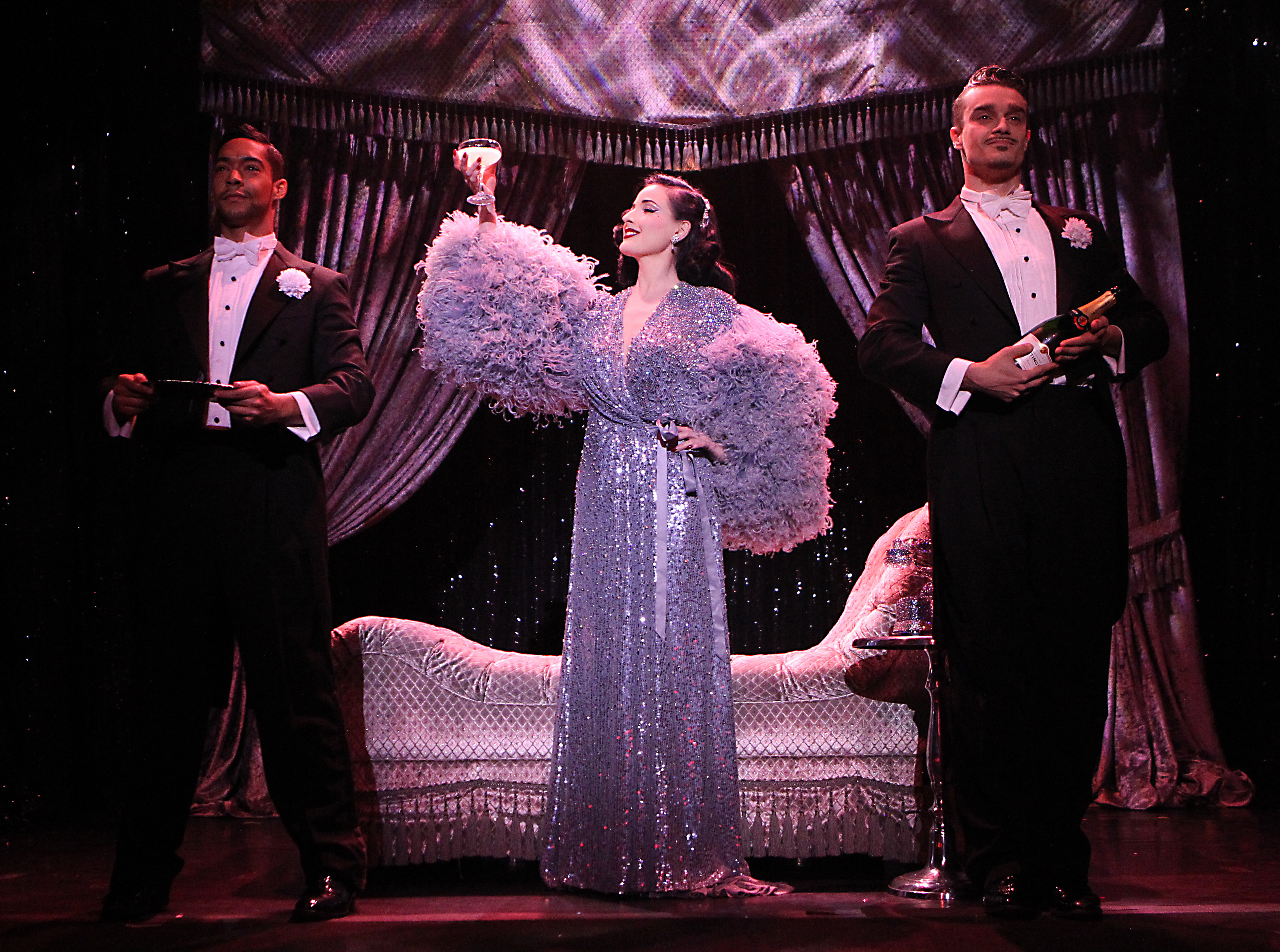 As a special treat, The Art of the Teese will also be the first time that Von Teese debuts her act, Lazy in the US, which has never-before been seen outside of its 2006 debut at the Crazy Horse in Paris. Lazy has been revamped to include her male backup dancers, known as the Vontourage, and will incorporate new costumes created by Jenny Packham.

“It was really fun because the [act], itself, has been put away for the last decade. I just had the idea of how we can breathe new life into it and make it work on tour and it’s become one of everyone’s favorite acts to see,” Von Teese commented.

Denver, mark your calendars for July 20 as the best of what burlesque has to offer rolls into town with The Art of the Teese at the Fillmore Auditorium. This show is sure to Teese its way into your hearts as you are engulfed in the luxurious rhinestoned sensuality of burlesque’s greatest icon and her diverse cast of show-stopping talent.

For more information about The Art of the Teese, click here.

Editor’s Note: the headline has been updated to clarify it is the first time Von Teese has brought her show to Denver, not the first time she has performed in Denver.