Each summer since 2001, Sloan’s Lake is transformed into a venue for celebrating the diverse culture and heritage of Denver’s Asian communities with the Colorado Dragon Boat Festival. Taking place on July 29 and 30 this year, the two-day event aims to “build bridges of awareness, knowledge and understanding between the diverse Asian Pacific American (APA) communities and the general public,” according to their website. To facilitate these goals, the festival features dragon boat races, an Asian Marketplace, a Taste of Asia food court, five performing arts stages, a kids area called Dragonland, a Gateway to Asia (with classes on Japanese flower arranging and Chinese calligraphy, among others) and the Cultural Unity Urban Arts Showcase stage.

Ahead of the annual festival, 303 Magazine joined one of the more decorated dragon boat teams for a practice at the Aurora Reservoir. The team is part of the organization PASCO — the Philippine-American Society of Colorado — and call themselves the PASCO Fighting Dragons. They have been winning golds and silvers consistently for the last five years in the races at the festival. The team began as a way for the Filipino community to incorporate tradition into their new lives in Colorado. It has since evolved into a welcoming group of people, both Filipino and not, who want to appreciate a culture that’s not commonly experienced in the States — while also paddling their asses off. 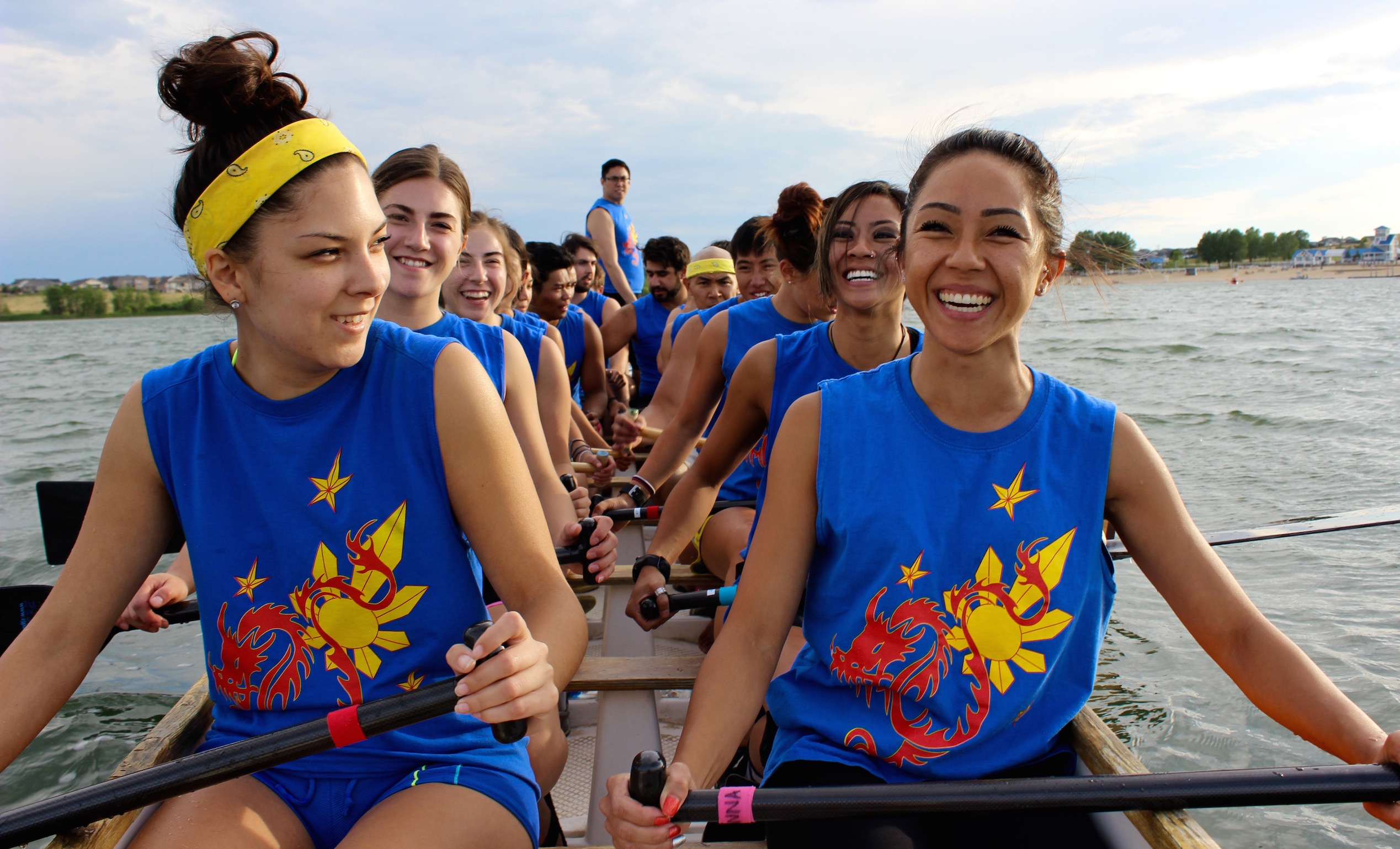 Jordan Pudilla and Anna Perez lead the paddlers in Row One.

The PASCO Fighting Dragons consist of 26 teammates, 22 of which are on the boat at one time. It’s a co-ed team, as the CDBF requires eight female and eight male participants, at the least. The boat is divided into three sections to improve speed and cadence — the Chrono is the front few rows and they set the true pace, the Engine Room is the middle and they provide the power, and the Rocket Room in the back are the people who determine the speed. Two members — the steersman and the drummer — are not technically paddlers, like the other 20. The steersman steers the boat from the back with a long paddle that acts as a rudder. The drummer sits on the front of the boat and keeps tempo for the 10 rows of paddlers by yelling or banging a drum. They range in age from 17 to 32, representing a broad spectrum of backgrounds, interests, strengths and even chapters in life.

The majority of the team has been involved with the Filipino community in Denver since they were very young, with a few of them knowing each other since they were in strollers. These long-time participants enjoy a familiarity with one another — calling each other by Filipino terms that mean “sister,” “uncle,” “brother” and “aunt” — though some of them are actually related to each other. Anna Perez, one of the women who sit in the first row and leads the rest of the paddlers, has been involved with PASCO’s cultural dance program for many years and joining the Fighting Dragons was another way for her to celebrate her heritage. Other teammates are currently participating because their friends are, because their boyfriend/girlfriend is or simply because paddling in an ancient sport sounded epic.

Matthew Teves and Miles Guardiano, the drummer and steersman respectively, operate as co-captains for the rest of the team. Guardiano has been with the PASCO Fighting Dragons for eight years, and Teves for five. They both agree that having returning teammates creates a more consistent environment that aids their success in races, but they also appreciate how much interest new members display. “Joining us mainly consists of people learning by word of mouth. We’ve had someone come up to our tent at the CDBF after seeing us race and just ask how to be involved. We welcome anyone and we like to say that when you join us, you are Filipino by association,” explained Teves. Returning members are common as well because the team operates with a camaraderie and friendliness that makes it easy to return. Mark Perez exemplifies this kind of easy dedication, as he has been a captain of the Fighting Dragons on and off for many years, stepping down from time to time as captain but remaining on the team as a paddler.

As part of the nonprofit organization PASCO, the Fighting Dragons spend time outside of training for the dragon boat races together, working toward the four pillars that PASCO focuses on: Culture, education, science and charity. For all of the 15 races the Fighting Dragons have competed in, PASCO funded them with money raised through charitable endeavors. This year, the team found a sponsorship with Mary’s Nutritionals, though they continue to volunteer time and effort toward other charitable causes.

Dragon Boat racing in the CDBF has quickly grown in popularity since its inclusion in the festival, from just 16 teams the first year to more than 50 this summer. Because of this growth, practicing for the races has also grown into a more competitive format. The PASCO Fighting Dragons begin training for the summer races in February or early March each year, a solid five months prior to the festival. This early training is focused on dry land techniques and are influenced heavily by CrossFit training. In May and early June, training intensifies and practice on the water begins. Once the summer is in full swing, practice for the Fighting Dragons is three times a week — on Tuesday and Thursday evenings and on Saturday or Sunday mornings — until the festival at the end of July.

The boats the Fighting Dragons practice on — called Champions — are harbored at the Aurora Reservoir, though the boats they will race in — called Geminis — on Sloan’s Lake are slightly different in construction. Generally speaking, both boats contain 10 rows of a small bench which will fit two paddlers and requires someone steering from behind and someone else sitting in the front (with a drum.) The practice boats are more narrow and closer to the water than the competition boats, though this gives the Fighting Dragons an advantage for having practiced on a boat more difficult to maneuver and balance. 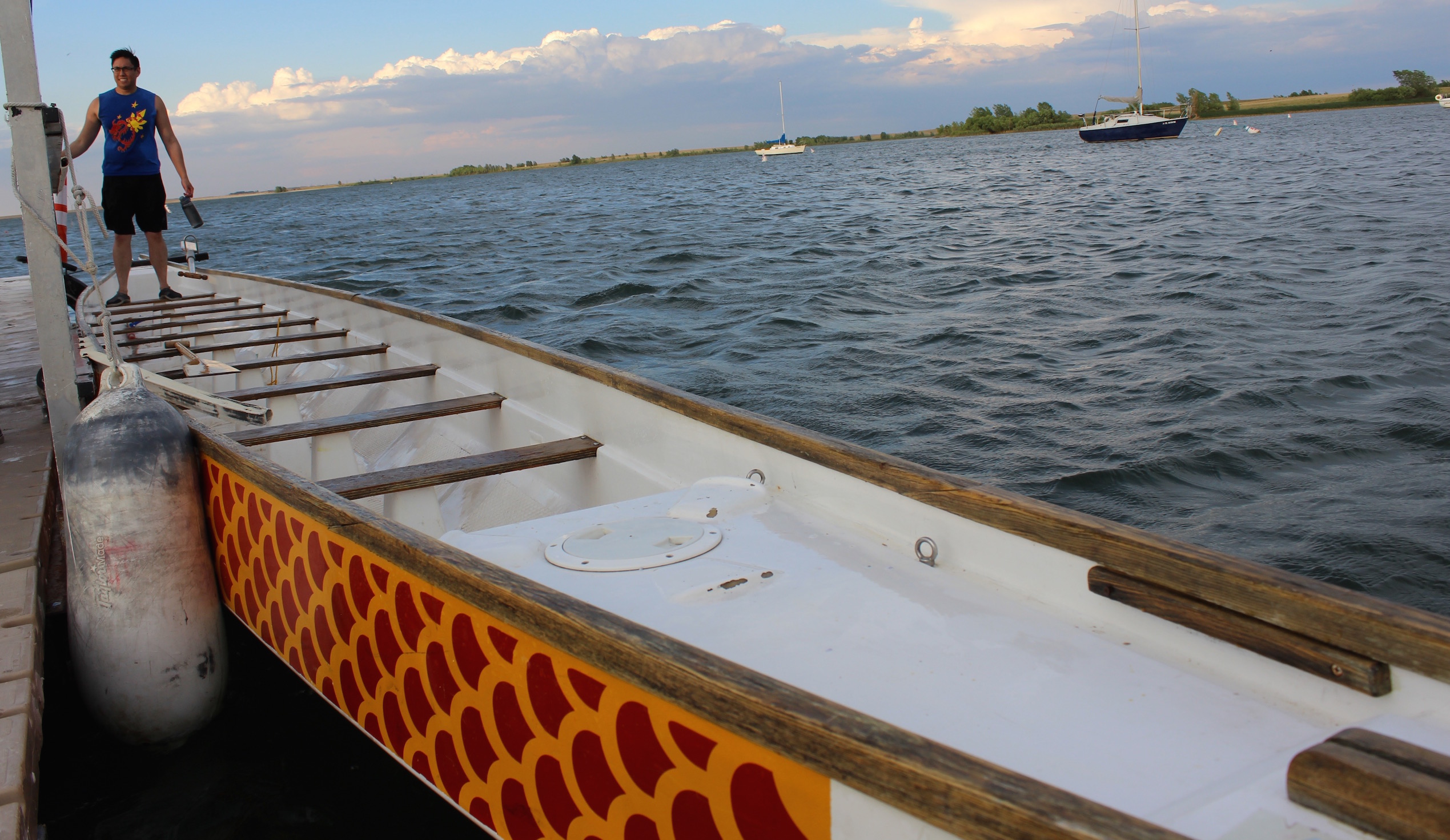 Practice on the reservoir depends on weather and other conditions, but usually it lasts over an hour and consists of some pre-paddle stretching, some chatting and laughing, some safety reminders and then a lot of paddling. Getting onto the boat is somewhat tricky and must be done in a certain order to ensure balance — an order that is decided by the co-captains at the beginning of each season, depending on each paddler’s strengths and weight. Once the boat departs the dock, the paddlers must work together to reach an area of the reservoir suitable for actually practicing the race strokes. In nearly the middle of the reservoir, Teves (the drummer) will shout out his commands to the rest of the team to begin the practice session and as the paddlers begin their strokes all at once, the boat jumps into action with a jarring speed.

Dragon boat racing is an ancient Chinese sport that is over 2,000 years old. Many other Asian cultures have and continue to practice dragon boat racing in various forms and the sport has spread internationally in the last half century. The dragon boat itself is symbolic of a dragon — with the scales painted on the sides and the oars representing claws — while the competition stems from a story about a banished court official turned poet whose honor is commemorated with the beating of many paddles on the water.

The CDBF highlights dragon boat racing because of the excitement, tradition and competition, which attracts many other nationalities to the festival to partake or observe. Anyone who has a full team can apply to compete in the CDBF dragon boat races each year, though there are fees to pay and certain requirements to adhere to. The boats and paddles are provided by the festival organizers, mainly because the boats are very specific.

In the festival, the races the Fighting Dragons will compete in are called the Hong Kong Style Division, and are split into 120 meter, 250 meter and 500 meter segments, which are basically rowing sprints. The other race option is the Flag Catching Division, which involves an additional person on the front of the boat who must grab a flag at the end of a 250-meter sprint before any other team. Last year the Fighting Dragons won gold in every Hong Kong Style Division race but the 250 meter, which they won a silver for. Two years ago, they won gold in all three categories.

The Fighting Dragons will race both days of the festival, July 29 and 30, and will most likely be very worn out by the end of the weekend. But their spirits are always high during the festival and they are hoping this year will result in another set of medals for team PASCO to bring home.

For a schedule of events during this year’s Colorado Dragon Boat Festival, visit this website.