When you picture a book club, you might imagine a group of middle aged women chatting about Danielle Steel novels over red wine or grade school obligations. Switch out picket fences for cell bars and you’ve got something that’s bringing hope to incarcerated folks across the state.

This something is Words Beyond Bars, a nonprofit organization that brings book clubs into prisons across Colorado. The concept is fairly simple — 12 prisoners sit in a circle once every two weeks and discuss a book. The impact, however, is significant. 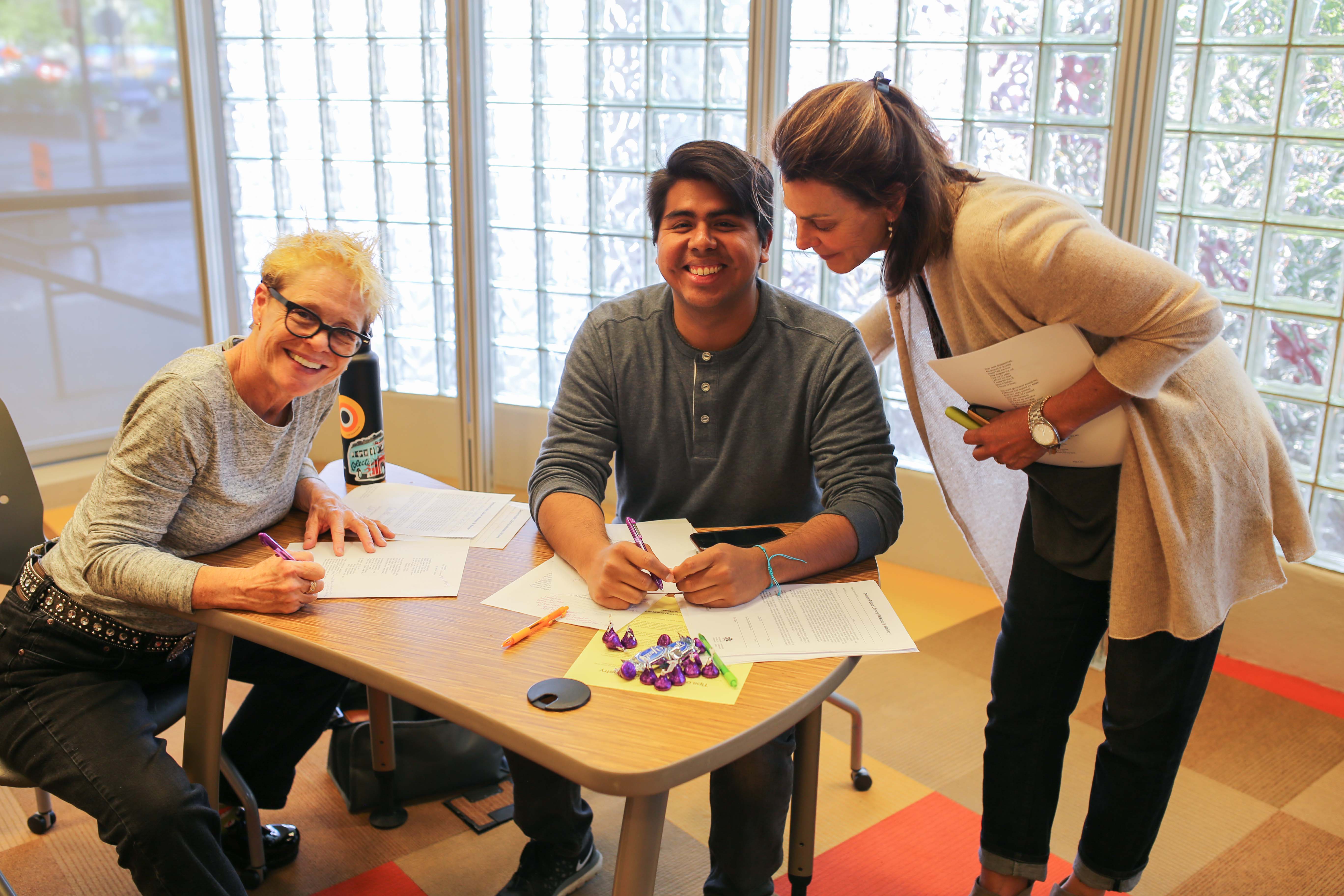 Karen Lausa, right, looks on as two volunteers participate in the Words Beyond Bars Write Night. Photo by Danielle Webster.

“The literature lets them travel,” said Karen Lausa, the founder of Words Beyond Bars. “Without running a therapy group … they begin sharing their perspective, their memories, their goals, their regrets.” Lausa began the program after searching for an intersection in her passions for literature and advocacy work. She worked previously as both a reference librarian and court appointed special advocate for maltreated, abused and neglected children in the court system. When trying to determine a new venture in her career, Lausa reflected on the fact that many of the children like those she’d worked with, especially those in foster care, end up in prison when they become adults. Out of this reflection and her love for literature — and passion for pairing the right person with the right book — Words Beyond Bars was born. The process began in 2011 and the program was fully functioning as a 501(c)(3) nonprofit by 2013.

Currently, the Words Beyond Bars program is in three facilities: the Sterling Correctional Facility, the Colorado Correctional Center and La Vista Correctional Facility (which is all women). Lausa explained that the program runs similarly to a semester system. Sessions last from September to December then February to May or June. Eight books are completed over the course of one session, and prisoners can participate in the program as many times as they’d like.

“Before you know it, in a place that certainly doesn’t encourage a sense of community, you’ve got a community.” 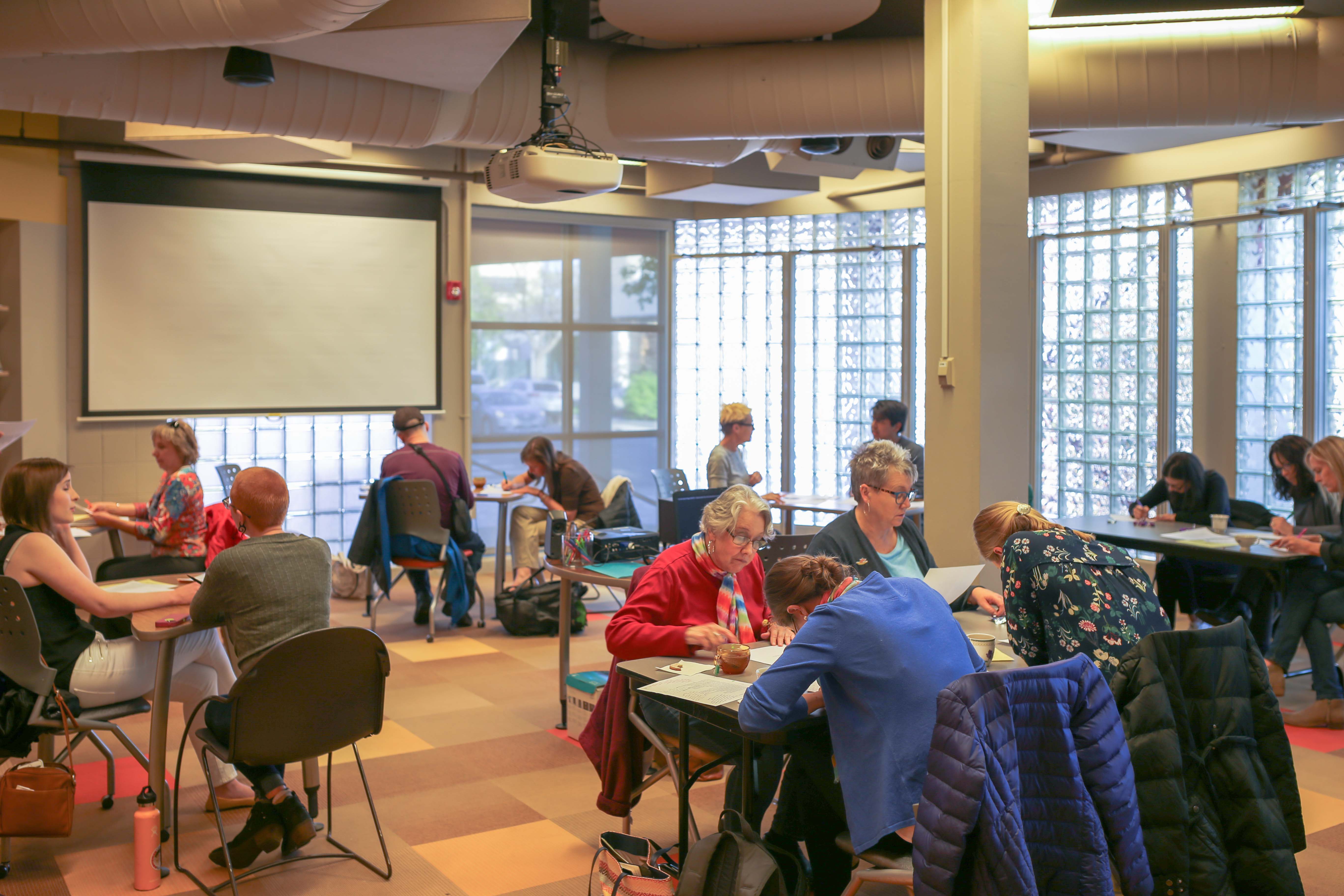 A group gathers at the Ross Cherry Creek branch of Denver Public Library to participate in the Words Beyond Bars Write Night.

Lausa keeps the program to 12 prisoner participants. She believes that anything larger than that can begin to get chaotic or intimidating. “As strange as it is to use the word intimacy in a prison setting, I’m kind of going for that,” she said. With these small groups, she strives for, “trust, camaraderie, empathy and a chance to see things differently and learn perspectives of other people.” Connecting through literature offers a sense of closeness and transcendence to the prisoners involved that most spaces in prison don’t. “Before you know it, in a place that certainly doesn’t encourage a sense of community, you’ve got a community,” Lausa said. “They sense that they’re not forgotten. There’s a sense of humanity between inside and out.” The positivity manifested in the book club often expands throughout the prison. In the Sterling Correctional Facility, the books being read by the Words Beyond Bars club are put on display in the library. This allows prisoners who aren’t a part of the club to read and participate, as well. “Across the prison yard, people talk about this,” Lausa said.  “They’re discussing different novels, they’re comparing notes as they read the book, checking if anyone else likes it or doesn’t like it and why. It’s kind of making it cool to run around the prison discussing books.”

After the biweekly discussions, Lausa asks the prisoners to write reflection papers on each book. These papers aren’t evaluated on grammar or punctuation, or even necessarily graded — Lausa explained that many of the prisoners she works with had negative school experiences, so she tries to avoid similar structure. Instead, the papers offer an alternative way to respond to the literature, and Lausa said that prisoners requested that they be read aloud in discussion. Lausa noted that the vulnerability that surfaces as a result of the papers is extremely profound. 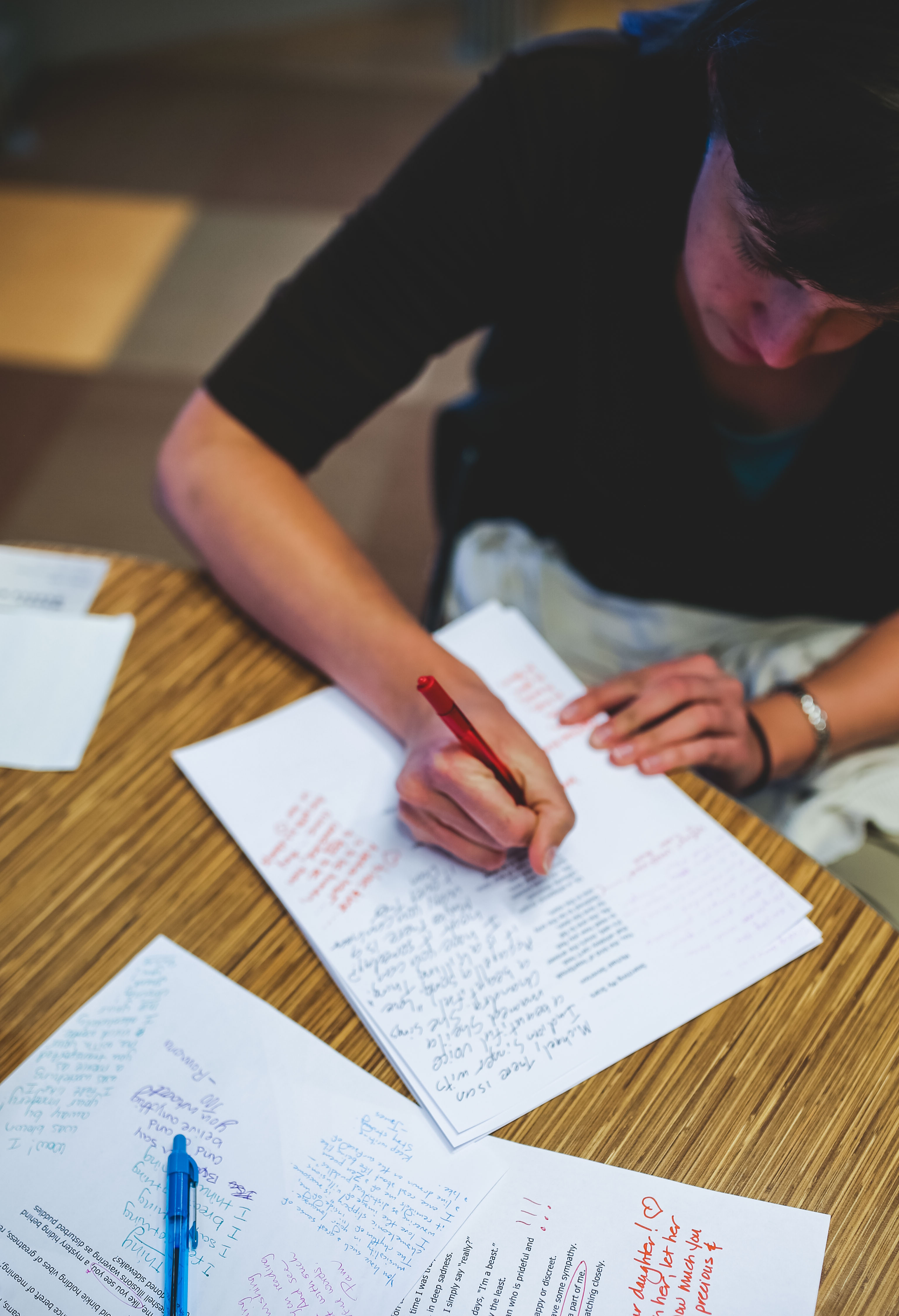 A volunteer provides comments on a poem written by a prisoner at the Words Beyond Bars Write Night.

A more recent Words Beyond Bars venture is using literature to blur the lines between the inside of prisons and the outside world. Write Nights are community events in which volunteers read and comment on the poetry of incarcerated folks. Words Beyond Bars began hosting them thanks to Lausa’s relationship with a nonprofit based in Washington D.C. called Free Minds, a program similar to Words Beyond Bars that sends books to incarcerated youth from the D.C. area. After Free Minds won money to expand their Write Nights program at the Aspen Ideas Festival two years ago, Lausa was chosen to pilot the program in Denver — and it’s been hugely successful.

Lausa has worked with Sterling Correctional Facility to bring poems out of the prison. The poems are printed and presented to the volunteers, who make handwritten comments, suggestions and praises on them. They’re then returned to the poet. “People want to know what’s going on in prison. They want to understand that piece of humanity that we’re not paying attention to,” Lausa said. “Validating a poem is an act of love and kindness, and it builds bridges with the community.” She also explained that the Write Nights allow folks on the outside to connect with the inside and place some validation in prisoners without having to face the often difficult and political conversations that usually surround incarceration.

Whether it’s in local libraries or in prison cells, Words Beyond Bars is bridging gaps and providing hope to incarcerated people of Colorado. It’s allowing people to find unity and humanity in words, regardless of their mistakes and free of misconceptions. “I don’t know the crimes they committed, nor do I care,” said Lausa, “But I see evidence constantly of change.”