Prolific rap hippy Mod Sun came to Summit Hall in Denver on April 28 and was able to chat with 303 Magazine before his performance. We were led to a back room under the stairs and Mod Sun politely asked us if we minded if he “lit up.” Saying of course not, he gave us his toothy smile while wearing white and red sunglasses. Chatting about all things music and politics, his positivity ran rampant throughout all his responses. Read on to discover this quirky rapper who’s made quite a name for himself in the industry. 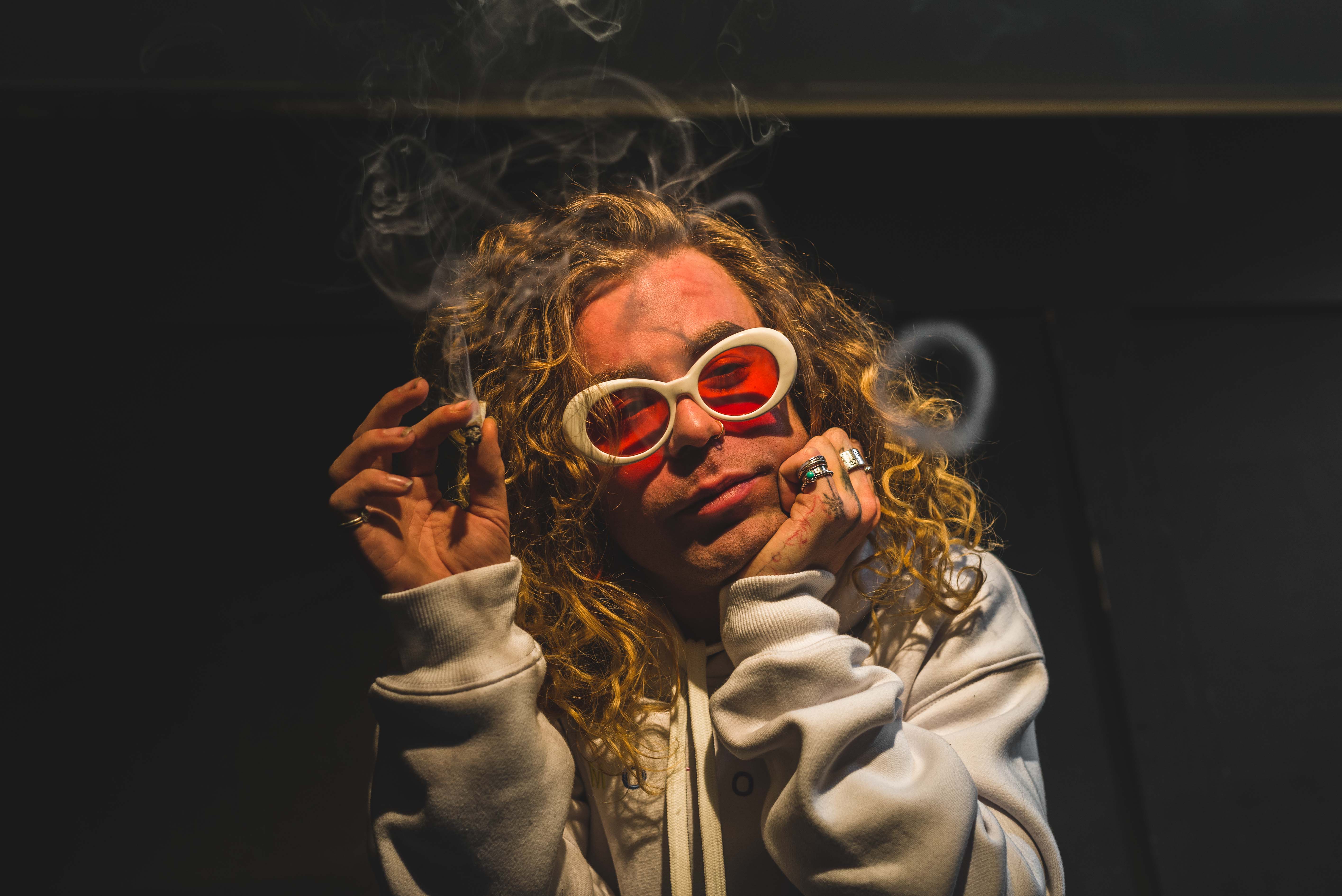 303 Magazine: You recently released your album Movie and it features a lot of talented artists. What do you like about collaboration?

Me and Dej Loaf did a song together [on Movie], “We Do This Shit,” she’s one of my favorite female voices in music and it wasn’t a natural collab, but it was amazing.

303: What’s it like creating a new album? How did you first approach Movie?

MS: There was a totally different basis to this album, which was that I recorded 300 songs for this album in 10 months and how I was able to do that is I was getting beats from producers. Where mainly up until this album, I was making all my own beats, too, so it was like the whole 360 of everything and when you’re doing that, there’s no way you can just make that many songs because it takes a lot to make a song and more than that, it takes a lot to make it really good.

Tom Petty really put me on this vibe. He said there are two ways to write a song — one way is when you go down the road that the music is telling you to go down and the other is when you try to write the song and both can be cool but Petty said all my hits have been when the song writes itself.

That’s the essence of the music — to let whatever is happening from that moment happen instead of coming into being smart and creative and conceptual all the time. 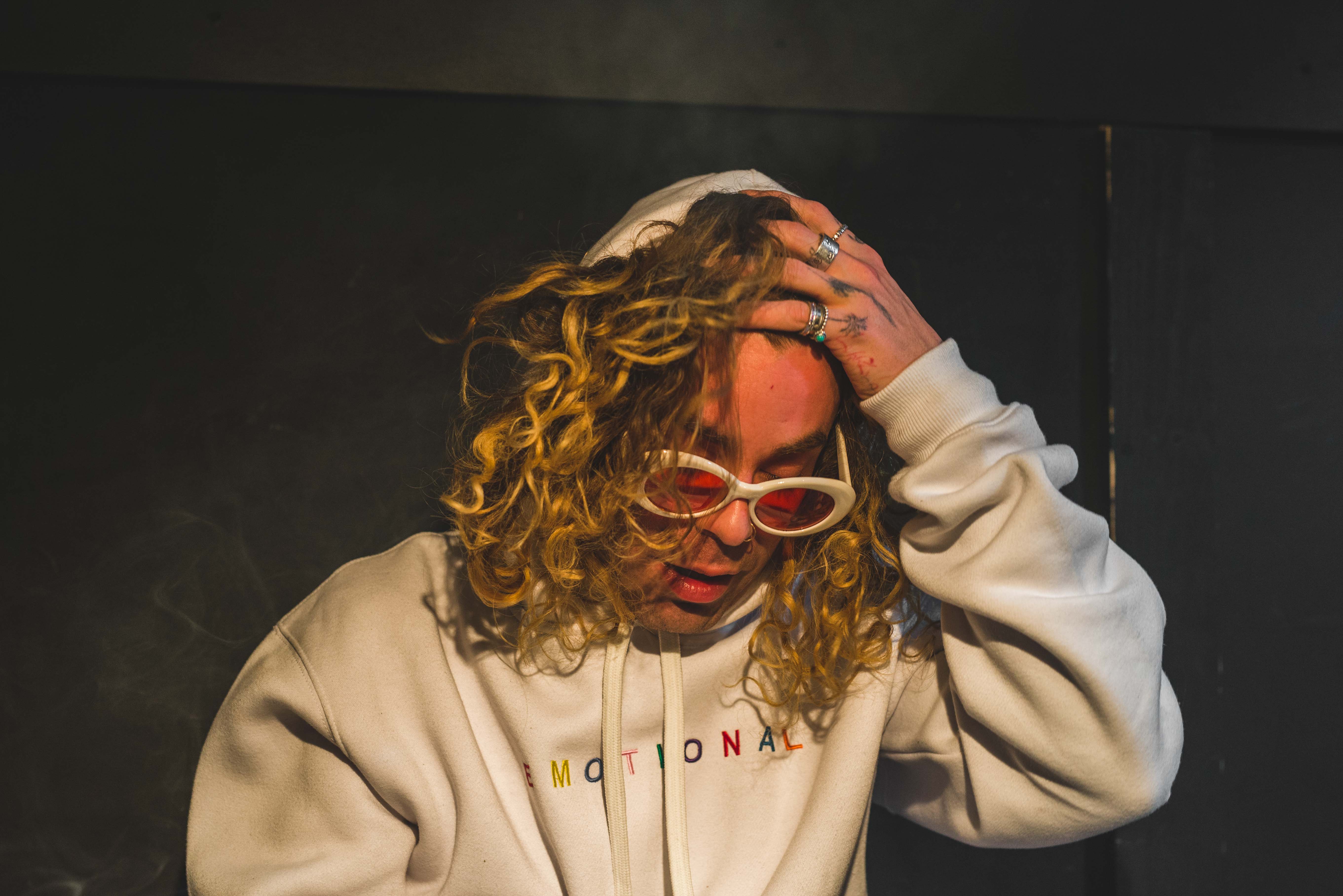 303: The song “Make Somethin’ Of Yourself” really struck a chord with me. Can you tell us the story behind it?

MS: That’s my favorite song I’ve written. Since I started writing music, I feel like I had that emotion in me, that vulnerability, that side of everything and I touched a lot of that song in my book and my book was a success because I went into so many things that I never talk about in my music feel a relief, a weight off my shoulder… I let an emotion into that song that I was dying to give. That one is very special to me. When I play it live, man, I go to another world.

MS: Besides obviously the environment here (laughs). I’ve been coming to Denver for a really long time, these kids get me more than a lot of places around the country obviously because just what goes with the fight for legalization of marijuana kind of goes hand-in-hand with the fight for positivity and being free, cliche as it sounds, it’s the fucking fact. So it’s a peaceful place and they understand my message because I base my music off ‘life is beautiful’ — if you woke up, you have a reason to celebrate. Denver gets that. And I get big ol’ bags of weed when I come into town (coughs from joint).

303: You’ve played in a couple different bands including some in the realm of punk. What genre would you classify yourself?

MS: Well, I look at it as moments in my life I’ve been involved in as genres, like pop punk and emotional music I was at the essence of that when it was happening. Internet music, mp3.com — my first bands were first posting that shit long before Soundcloud and Myspace even. I was really at the pioneer ages of internet music. I feel like I was one of the first people using it and trying to build a career off the internet.

Genre-wise, am I rap music? On this album [Movie], I feel like I have songs that can be played on urban radio and songs that could be played on Top 40. Am I a rapper? Fuck yeah I’m a rapper. Definitely. Am I in the genre of rap? I don’t know, if you listen to the radio, my songs don’t necessarily sound like that — deeper than that I’m a musician, I can play every fucking instrument, I was in bands, I learned how to write songs in a garage with three other people — and not in front of a computer. I’ve done all the steps, the music I’m making now won’t be the same that I’m making at the end of my days but I will always be making music. 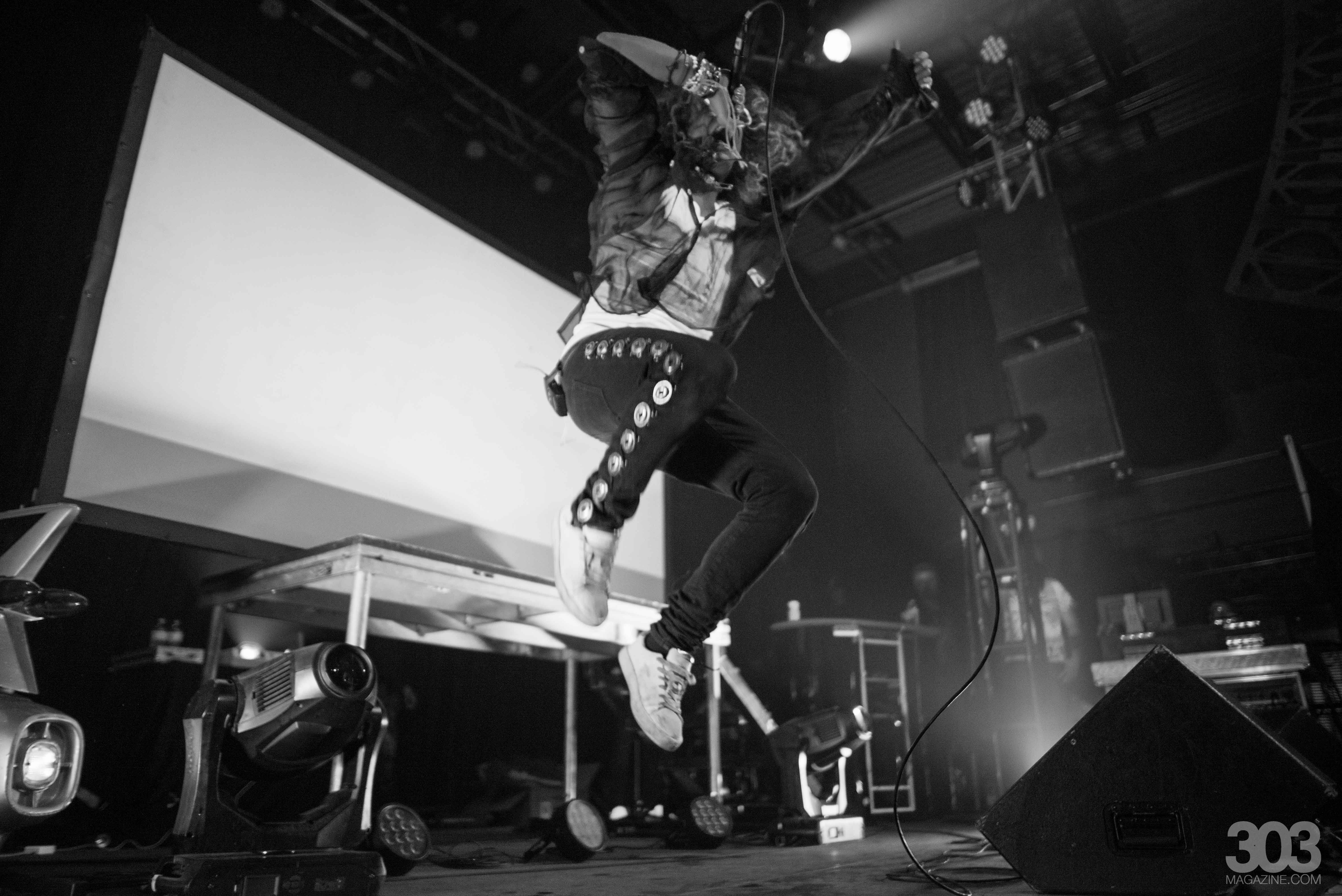 303: You have a very positive mantra about yourself. What do you credit this to?

MS: The Law of Attraction. 100% changed my life, which is simply saying your mentality becomes your reality. Your thoughts become things in your life so if you think about things you don’t want, that’s what you’re asking for.

That’s what I base everything I do upon. It’s okay to see bad things go on, but to talk about bad things in a way where you do not offer a solution, it means you’re bringing a problem to a problem. You should only bring a solution to it, that’s what we need more and more every day: The idea that things will get better. People, don’t forget there was once a Great Depression, this ain’t the fucking Great Depression right now, don’t turn it into that.

303: With your positive outlook, how do you feel about the current climate in America?

MS: It’s always darkest before dawn. There’s a lot to be said for what’s to come. The way I view the government right now — it’s kind of harsh reality. My idea is not, “Fuck Donald Trump,” even though I don’t believe in what he says, I do believe in having someone up there that is not a complete fucking puppet. You can’t hide all the things Donald Trump has done. We saw all these things take place. There’s more truth in poetry in having someone who’s potentially evil but we’ve seen the evil this entire time, it hasn’t been hidden from us.

Where we stand right now? I work with what’s going on, I’m here man. This is the essence of where I could make my dreams. I’m going to be the change I want to see. So, when I stand up in front of these kids, there’s more than just songs being played. There’s an absolute message. 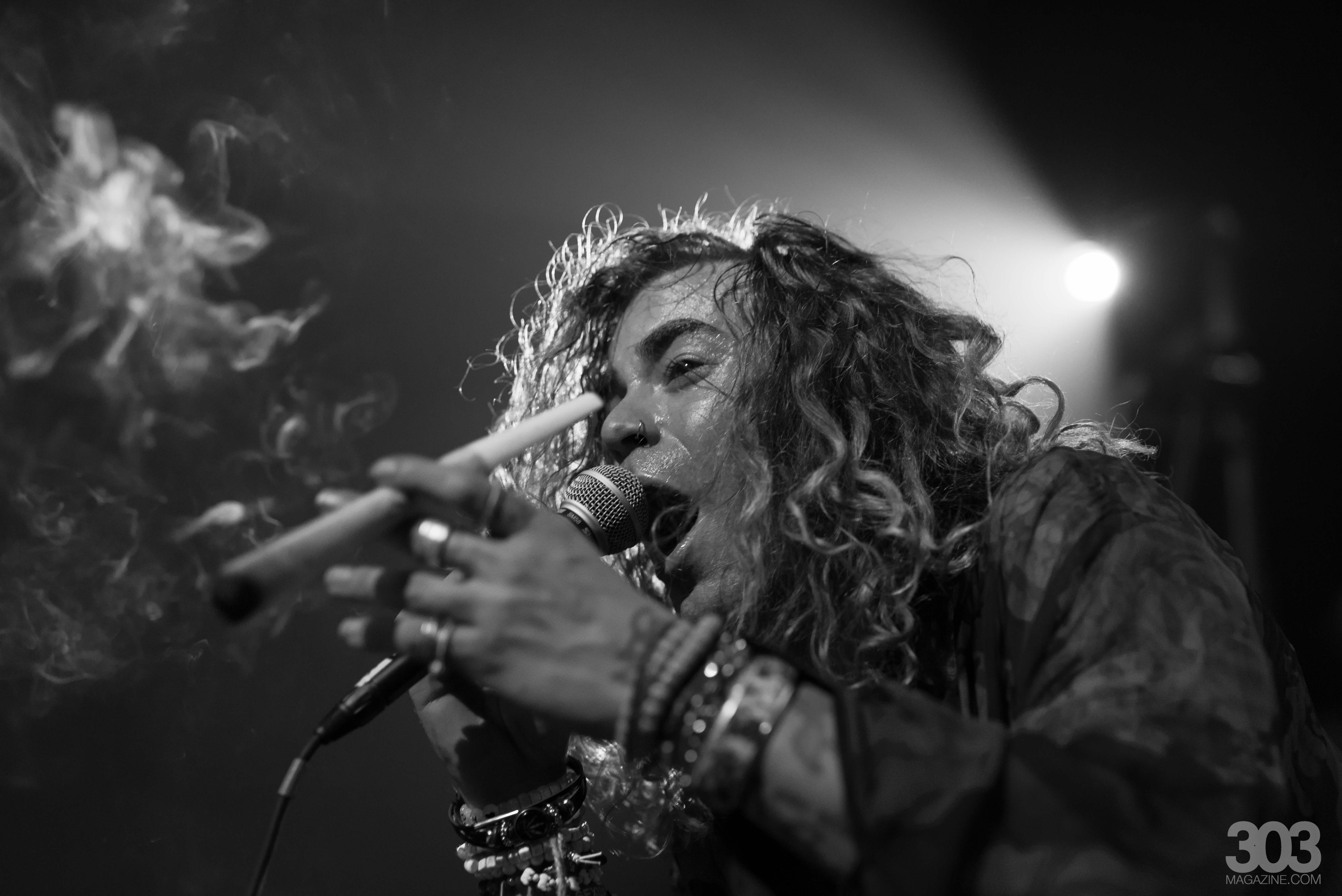 303: That’s one of the reasons I gravitated towards your music was because of the messages. A lot of rap culture can have negative images.

MS: A lot of rap culture is based off having a girlfriend but talks about having sex with every girl on the block while his girlfriend stands on stage. That’s the reality of the fucking genre. Do I respect that shit? Fuck no, I feel awful for the girl that’s sitting there listening to her boyfriend rap about fucking the girl in the front row. That’s raw. That’s a hard life to live, but do I want them to change what they’re doing? No, because I need the opposite of what I’m doing to exist for me to be able to do it. I know what role I play, I don’t play this role for sexy outer, I have a sexy inner. I want people to be attracted to that and how I’m pushing the things I say and not just making them up and fake this life. I really mean these things I say, I really live my songs. I don’t want there to ever be a moment where I feel like I’m lying to these people.