Colorado might be home to the Rocky Mountains, but it’s not just outdoor rock climbing that’s sweeping the state in terms of athletics. This past weekend, more than 120 indoor climbers from across the US participated in the 2017 Sport & Speed Open National Championship here in the Mile High City. Officiators said that Denver definitely turned up in turn of competitors and spectators.

Denver’s very own Movement Climbing + Fitness gym hosted its first ever Nationals competition. With packed bleacher seating and several standing-room-only areas, Denver was ready to see these young and talented climbers put on a show — and they did not disappoint.

With two days of both speed and sport climbing, contestants brought their A-game in an attempt to win a first place prize of $20,000 and a chance to earn a spot on the US team. For speed, climbers as young as 15 years old, scaled a wall with the clock ticking. Sport climbers used every last ounce of upper body strength in order to climb as high as they could on a 55-meter wall. Competitors were not allowed to see the route beforehand, and it was specifically built to test their ability and endurance.

Rock climbing is no easy feat, but this year both male and female finalist sport climbing routes were topped (completed) which doesn’t always happen — even at Nationals. Here are our favorite highlights from this year’s event.

A Boulder native, Margo Hayes is Colorado’s climbing sweetheart, but don’t be fooled — this young lady is a beast. In February, at only 19, she climbed a 131-foot line up the El Pati wall in Siurana, Spain — making her the first woman ever to climb a 5.15a route. As last year’s National Sport Climbing Champion, Hayes took second place this year. But she earned thundering applause as the audience held their breath when she became the first competitor in the finals competition to top the female route.

“I love Colorado. I’m happy to be a Colorado girl,” Hayes told 303 after scoring her medal.

Ashima Shiraishi Was a Tiny Spiderwoman and Took Home 1st

Repeatedly named one of the most famous climbers right now, Ashima Shiraishi doesn’t let the popularity affect her cool head.

“You can’t really expect anything at a competition because anything can happen,” she said.

As one of the strongest young climbers of all time, Shiraishi is the youngest climber and second female to climb a 5.15a route. The petite Japanese New Yorker is agile enough to maneuver her way up most anything, and all spectators will agree she’s entertaining to watch. Taking her time on Saturday night, it’s no surprise Shiraishi didn’t seem to break a sweat while nabbing first place in women’s sport climbing.

Kai Lightner Climbed with Swag to #1 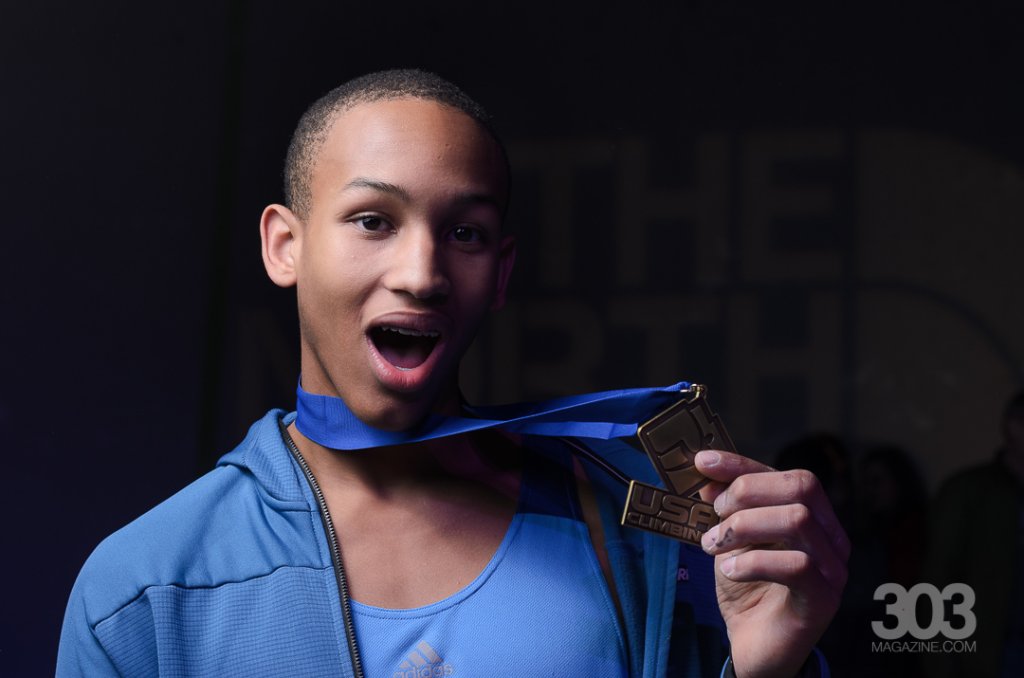 As the last male sport climber during finals competition, Kai Lightner gave the crowd what they wanted — to see the men’s route completed. After many failed attempts by other competitors, he was the only one to top the route and he did it with style. Although this was only his third time at Nationals, the North Carolina native said, after coming in second place last year, he was thrilled to take first. However, he explained, that’s not the best part of climbing.

“[It’s] being so high up and seeing my hard work pay off. Just being able to climb and try my best and know that I worked really hard to compete in something I’ve been doing and loving since I was six years old makes me feel amazing,” Lightner said.

The Speed Climbing. All of It.

Although it was shorter than the sport climbing events, there’s nothing more exciting than watching two climbers compete by climbing a 10-meter route in seconds. With the best time of 5.83 seconds, Texas native Claire Buhrfiend was named top female speed climber and John Brosler had an impressive time of 4.23 seconds to win the male category.

All photography by Austin Cope. For more photos from the event go here.