What You Missed at the Colorado Libertarian Convention

Over the past weekend in Westminster, Colorado there was a gathering of a political party that values your privacy above all else – the Libertarians. All political parties are private clubs that hold conventions annually, in every level of government, to determine their platform, the candidates they want to promote or nominate and to rally the support of their base. We caught up with the young third party that is starting to make real waves in the political landscape. After upsetting the 2016 presidential election their foot is in the door and they are not going to back down until they are fully on the national stage. Pulling values from the center left and right politically while putting full focus on personal freedom and laissez-faire capitalism the Libertarian Party might be exactly what the framers had in mind.

The Libertarian Party was founded in 1971 in Colorado and had its first national convention one year later in 1972. The ’70s were the prime time for a party focused on personal freedoms and non-government interference to spring up. At that time, the mistrust of government spurned by the Vietnam war, the highly active civil rights movement and the oncoming War on Drugs that would cost trillions of dollars would push certain citizens of the United States to say “back off” to the federal level of government and “watch it” to the local levels.  The Libertarian Platform continues to reflect these simple principles today. As of July 2016, 144 Libertarians held elected seats in 34 states including three congressional seats. But many Americans had not heard about the Party until the 2016 presidential election when Libertarian presidential nominee Gary Johnson and running mate Bill Weld swept up 4.4 million votes nationwide — 3.3 percent of all votes counted and more than all other third party candidates combined. The Libertarian presence in Colorado’s 2016 presidential election was even larger than the national average with the Libertarian ticket pulling in 5 percent of the vote — five times as much as the next largest third party, the Green Party. We went to the Colorado Libertarian Convention to find out what the party can bring to Coloradans and what a Libertarian country would look like. 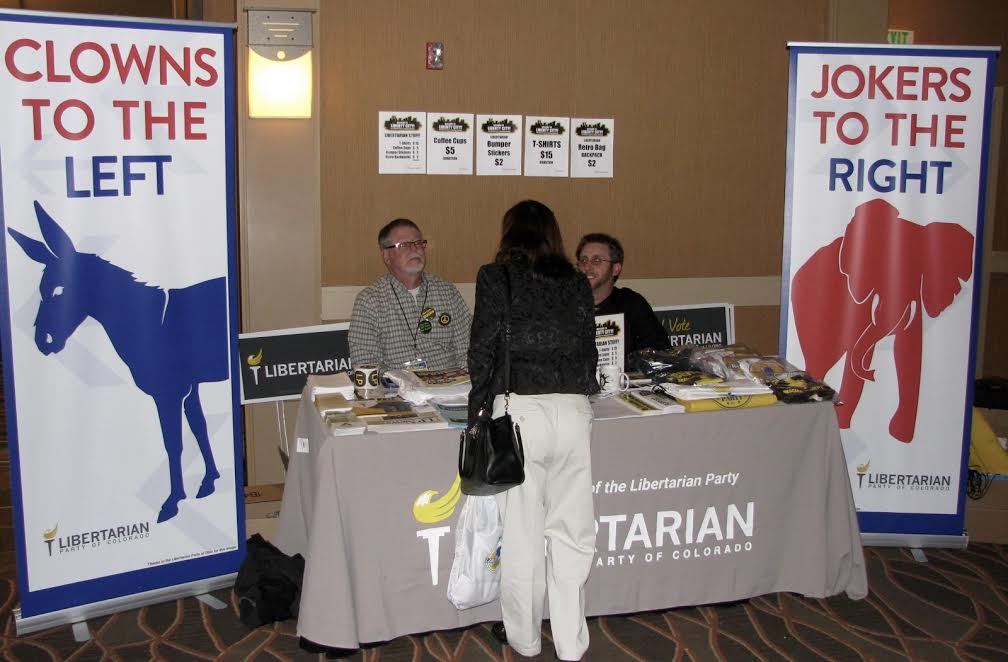 Saturday and Sunday morning were given to in-house Party Business at the Westin Hotel in Westminster. Higher ups and those passionate about policy, which in Libertarian terms usually means removing it, set to updating guidelines, giving reports and tallying membership to try and get more delegates to the National Convention. Having additional delegates from Colorado at the national convention raises the say they have in picking a presidential nominee and with the success of the last election there was a renewed urgency to get people officially signed up and counted.

Saturday afternoon is where the real discussions of applying the platform to daily life took place. Many seminars tackled attempting to get a third party onto a ballot, into a national debate or were just about the best way to spread the message of the party. While laws vary depending on where you are running they are set by the two parties already in control (Democrats and Republicans) and often require extensive support or membership and sometimes there is a financial component making it very difficult for third party candidates to break through the bureaucracy and be seen on the national stage. Local elections can be easier but without membership there is no cash flow and without money it can be hard to promote a candidate or get a strong media message across. 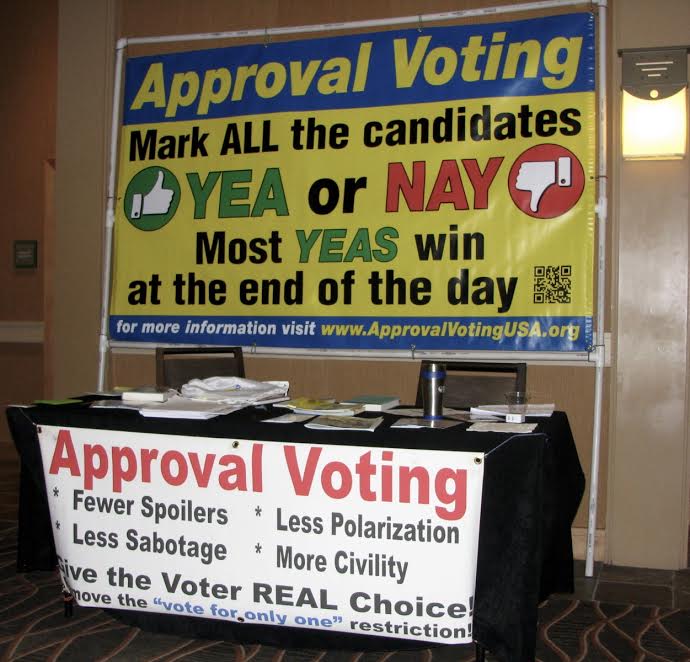 Other seminars were related more to what a Libertarian world would look like: The effects of government interference in business, ending the war on drugs and the prohibition of all controlled substances and legalizing prostitution and sex work. Sarah Peterson is a traveling speaker and sex worker rights advocate. Her seminar on full legalization of prostitution was titled When Helping is Hurting and discussed the resources that would be freed up by allowing consenting adults to perform sexual acts for money or goods. She opened up about a common belief in the Libertarian community that arresting non-violent offenders is tantamount to putting humans in cages for no reason:

“We, [libertarians], offer solutions and care about people. We have been working to decriminalize drugs since 1971 and prostitution since the beginning. We want people to have personal liberty and personal responsibility, they go hand in hand. Liberty, when in place, will create a happier environment, we won’t have people in cages for non-violent crimes […] Libertarianism is where we’re going to end up. It will be a natural progress.” 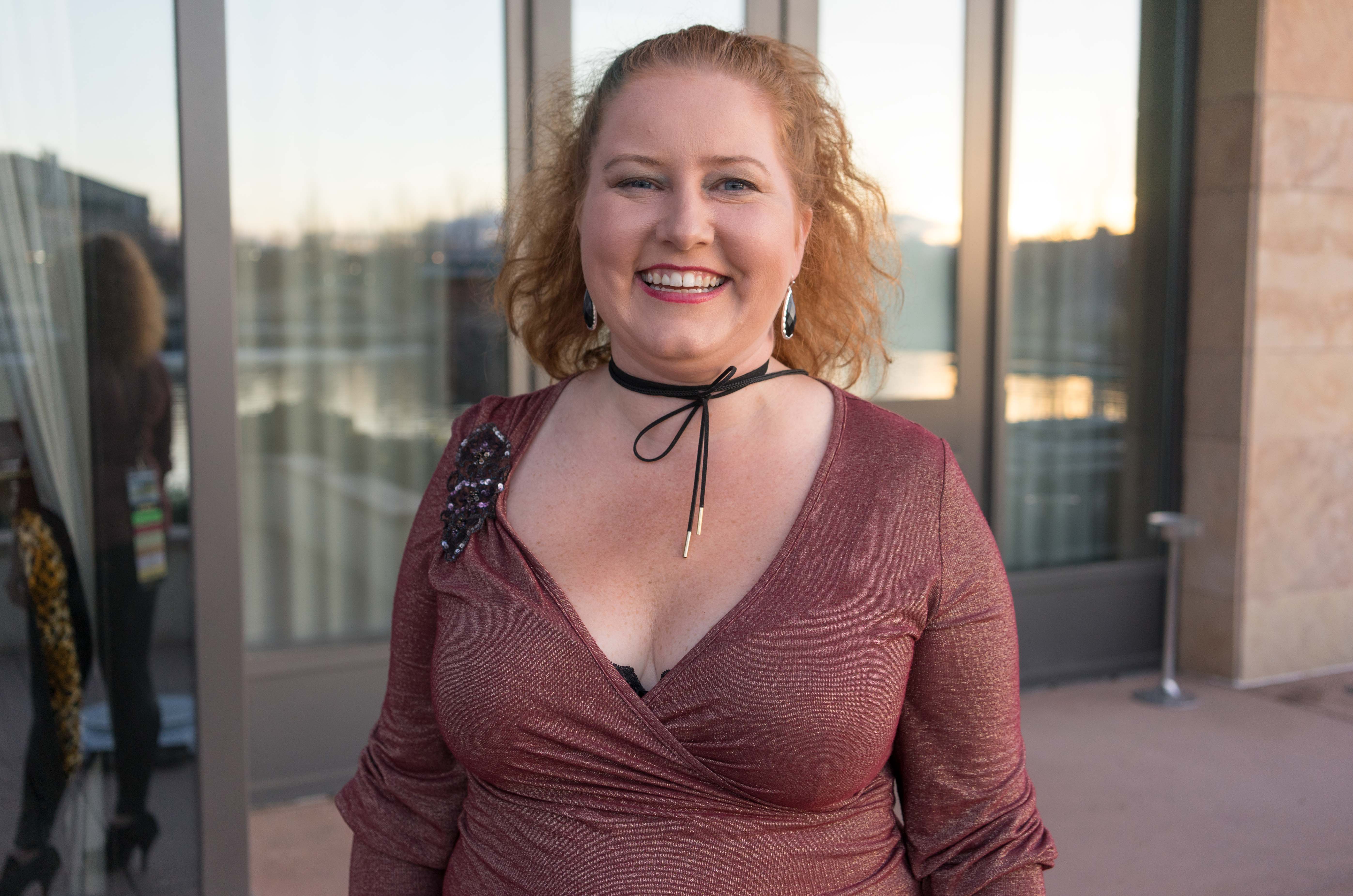 In addition to the seminars and party business, Saturday offered an array of Libertarian business, entertainment and related organizations to showcase their goods, platforms and wares. The young men from Major League Libertarians came to promote their podcast and live streamed videos. The MLL’s Facebook Page has a ton of content and discussions relevant to young libertarians in Colorado, they also posted a ton of content from the convention itself. 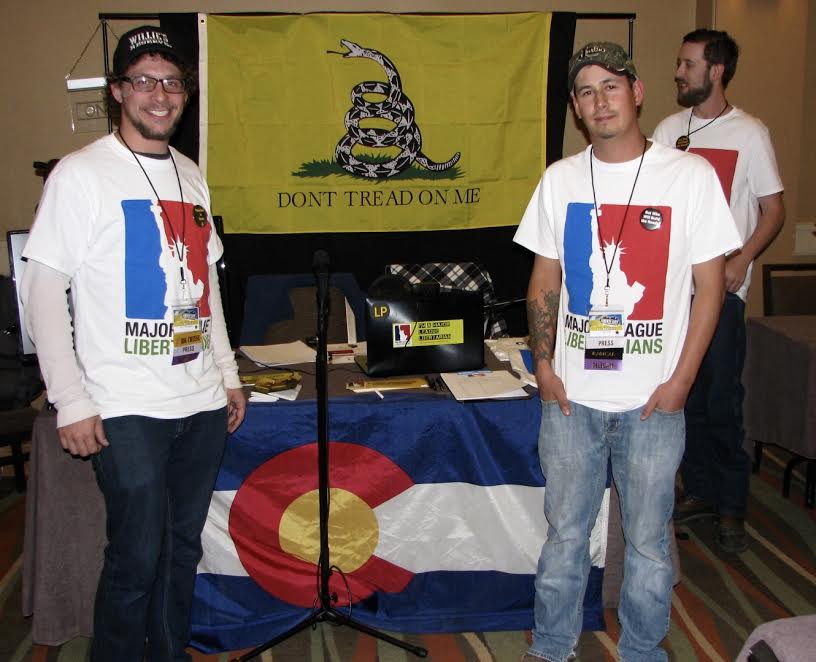 Saturday night culminated in a gala style banquet with high profile circuit speakers talking about upcoming legislation and their respective bids to bring Libertarian values to different levels of government across the United States.

Brian Rogers summed up two very important parts of Libertarian doctrine in his seminar titled Government Interference in Business, “What then is business if government is going to interfere in it?”  This question drives the majority of Libertarian Principle — the idea that a free and unregulated market will regulate itself. Libertarians believe that the majority of restrictions that the government places on the free market are designed to eliminate competition of existing special interests or to gross extra funds for the government in the form of fees, dues and fines. They believe this to be a violation of the fourth amendment, an example of unlawful search and seizure. 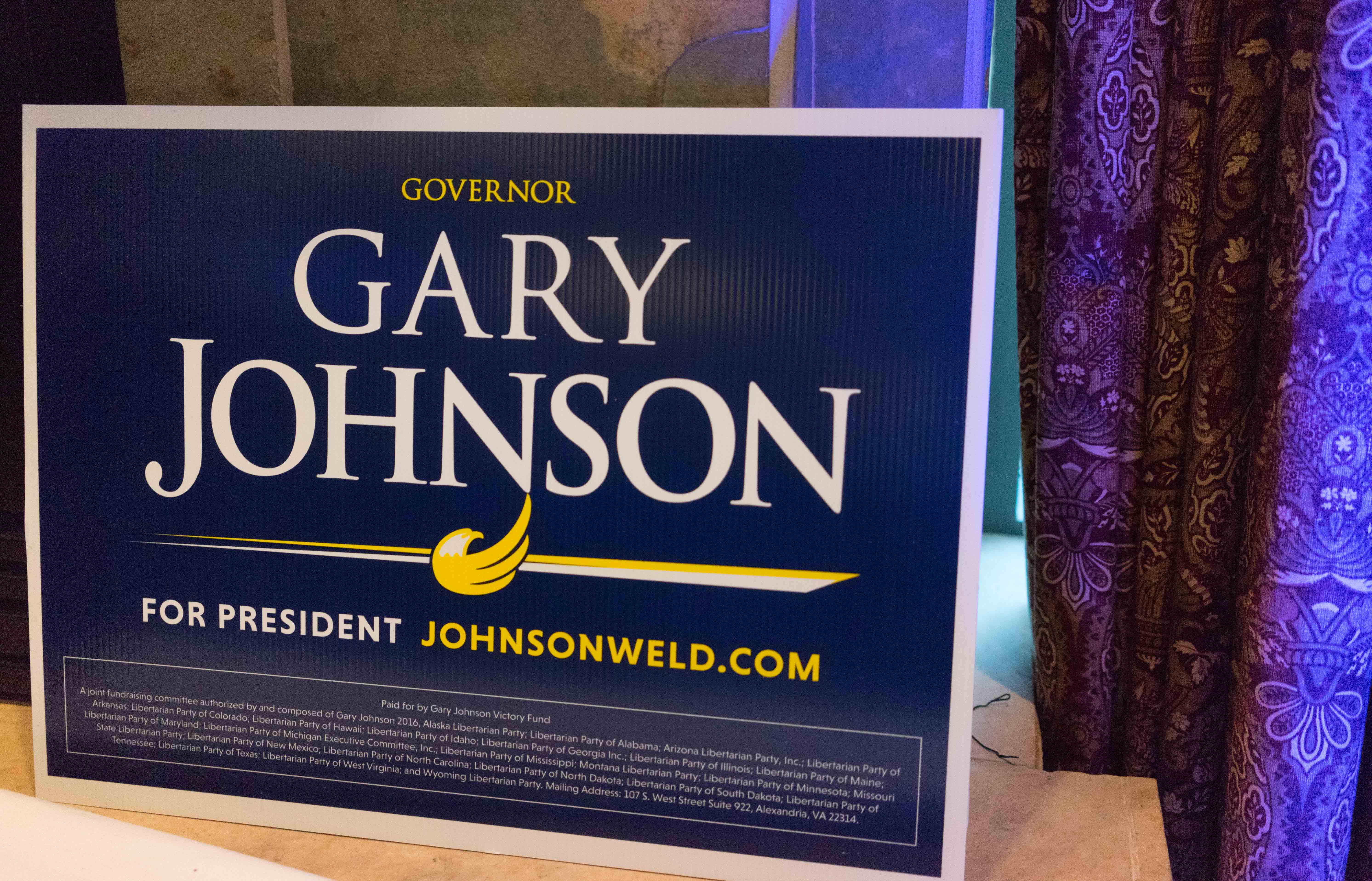 Rogers also commented on prohibition, which in its various forms is another sticking point for the party, “Prohibition almost always ends up more dangerous and more expensive to society.” This theme plays large rolls in the Libertarian arguments to legalize drugs and prostitution. The idea that attempting to prevent something that will happen anyway (as is documented in both these realms) simply costs taxpayers limitless funds and creates unsafe environments and back alley dealings.

While Libertarians differ on the amount of government that is actually necessary (on a scale of none to severely limited), they do agree that given the opportunity many of the services provided by the government with tax dollars would be provided through volunteering of funds and charitable workers on a community to community basis based on need. John Keil is running for City Council in Loveland’s Third District and we asked him what Libertarianism can bring to a city council. “I’m running to oppose subsidies […] we need new ideas for generating funding,” Keil said. “We want to encourage volunteer funds, not wait for votes and taxes. If a lot of people believe in something it’s easy to get it going” 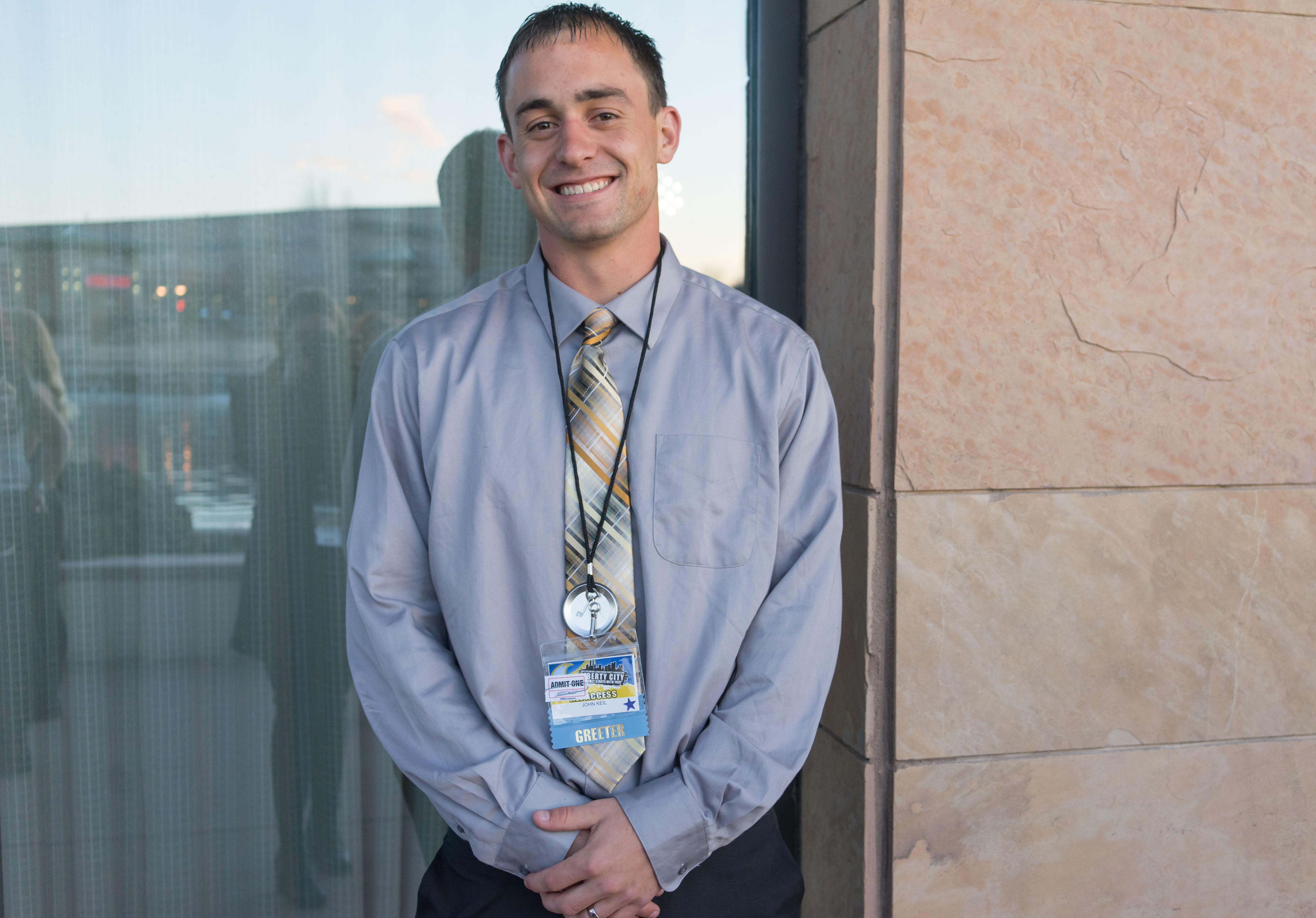 Kim Tavendale is running for State Representative in House District 33, in the Broomfield area, we asked her what Libertarian principle she wanted to bring with her to office, “Libertarianism embodies the spirit of Colorado,”Tavendale said. “The sense of independence and self-reliance that permeates throughout the state.” 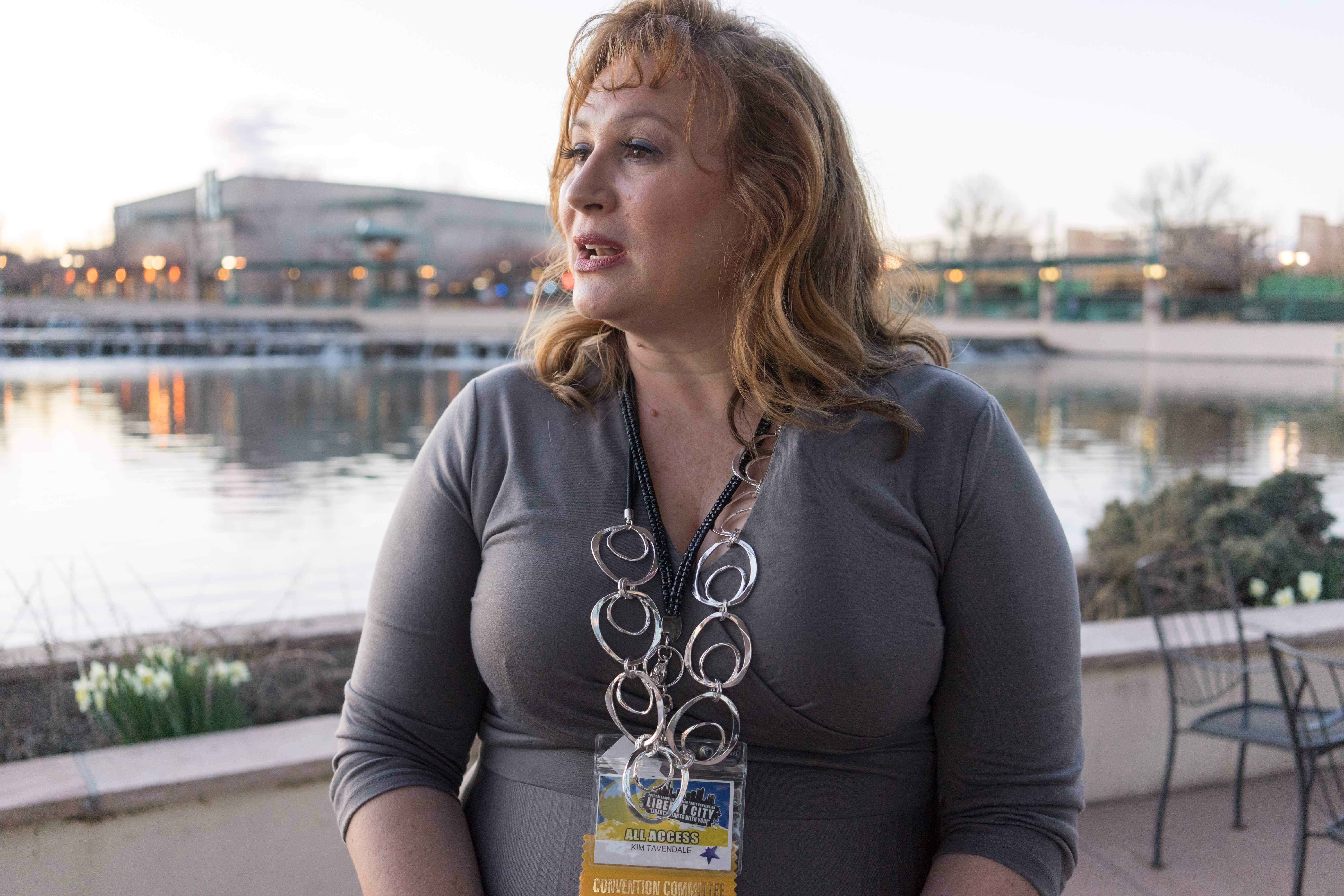 Austin Peterson, who debated Gary Johnson for the 2016 Presidential nomination had a grander picture of what the party offered, “More freedoms, all the freedoms! Coloradans don’t know how often Libertarians are fighting for your freedoms. We are present for all ballot access issues, when recreational marijuana was legalized we helped. We are trying to restore the gun rights that were recently lost in congressional bills.” 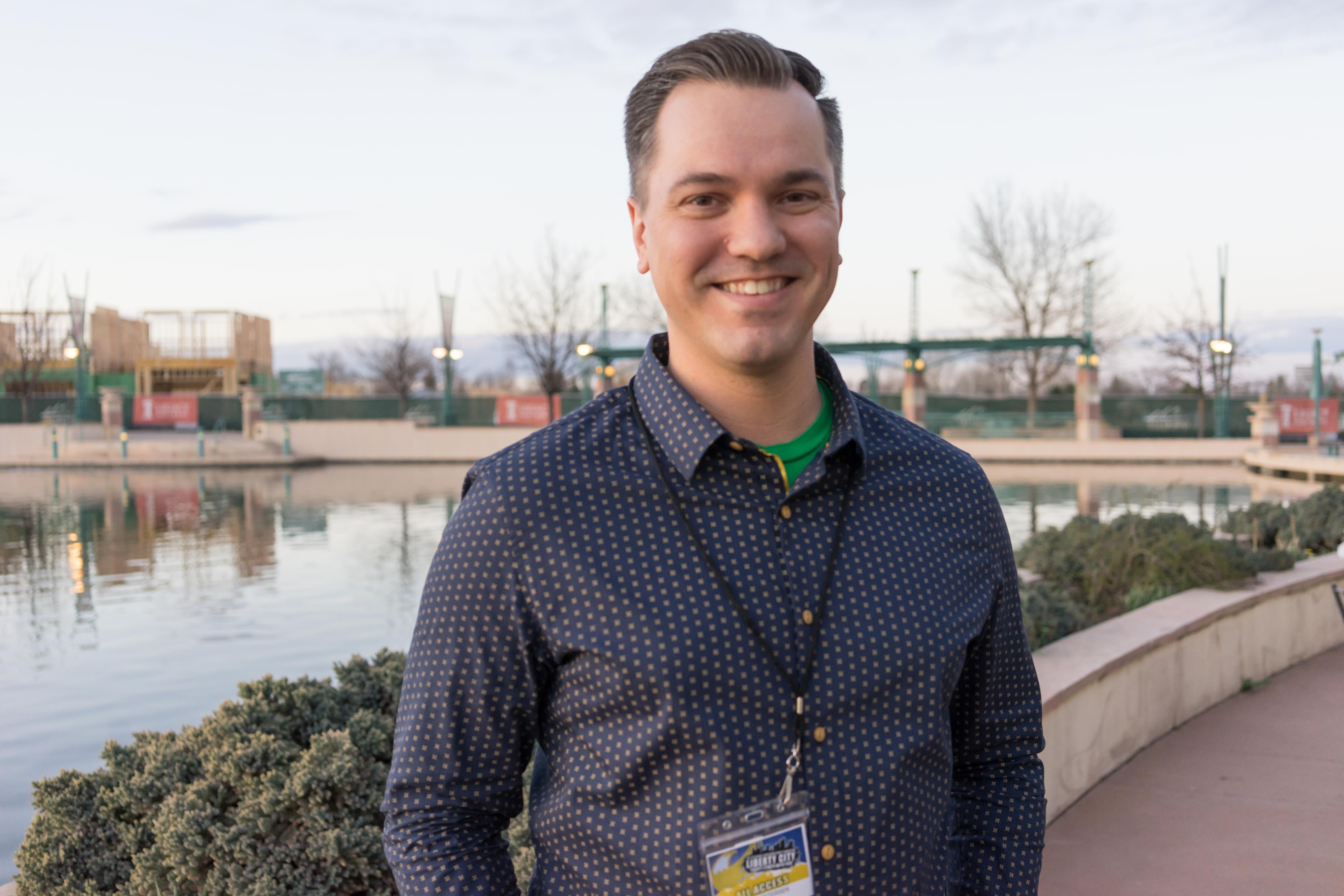 It is unclear what the future will hold for the Libertarian party but the growing (in numbers and votes) third option is certainly here to stay and their consistency in message and platform helps to set them apart.