It’s no secret, Denver loves the funk. Being a fan myself, it is a privilege to live in town that caters to it so. With the blooming success in the area, it is bands like Analog Son who are keeping the dream alive for those who find their happy place sweating profusely in a packed room, rubbing elbows vigorously for hours. The duo of funk-a-teers, Jordan Linit and Josh Fairman, have taken Denver by storm, and are ready to drop their latest beast of an album at the end of the month,  with a full-fledged rager to complete the event.

We got a chance to chat with Jordan, and he told us all about the 18 years of his and Josh’s collaboration. The heavy hitters they have joining them on this new album and all the other things that make up Analog Son will make them become your new favorite hometown funk freaks. Check out their music here.

303 Magazine: This cold weather calls for some funky dancing to keep warm. Is it hard to dance while playing?

303: You have been playing together for quite a while. How did the collaboration come to be?

JL: Josh and I have been playing together since we were fourteen or so. We would get dropped off at blues bars by my folks; I mean we have played in many different bands over the years. We were on tour with a band Kinetix for a few weeks and Josh and I just wanted to record a couple of funk tracks. A buddy we have from the New Mastersounds, Joe Tatton, had a break from tour and we decided it would be fun to just go in and record.

What transpired and came out of the sessions was far above anything we thought going in, and it hit us right then and there that this is something we should be doing all of the time.

303: Black Diamond has some hot players on it. What is it like getting together with such seasoned musicians to create your vision?

JL: You know, it feels pretty cool to have guys that we’ve looked up to for a long time willing to come into the studio. It was pretty unreal experience. There are certain people that it is interesting to tell them what to do.

303: What is your favorite part about being in the Denver music scene?

JL: I love every bit of it. It is so inviting and community-oriented. Some other big cities, it is a little more cut throat. People here really help each other out. When I was younger and had a harder time getting gigs, other cats would do their part to hook you up. It’s just a warm community vibe of a whole lot of talented people. It is pretty unreal.

303: Why is Denver the best place for funk music?

JL: I think people are just happy around here. People want to get funky!

On a more serious note, I think it has to do with some of the other styles that are popular around here. There has always been a strong jam scene here, funk is deeply rooted into jam. Electronic music scene, a lot of the big DJs that came out of here got big making really funky tracks out of old school funk stuff. I’d say that has a lot to do with it.

303: What are you looking forward to the most at your show at the Bluebird on January 27?

JL: I am looking forward to playing the new tunes that we’ve written. We have some new material and we’ve gotten together to play, you might even hear music from another upcoming record.

I would say definitely get in some yoga in the afternoon, get a good stretch and drink some water. 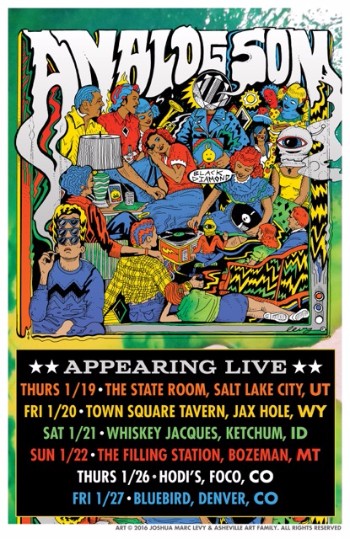 Analog Son will be shattering your skull with excellence this Friday, and considering their last album release party sold out, I wouldn’t sleep on this baby much longer. Tickets can be nabbed here.