In 2010, The Impossible Winterbourne, fearing the end of the world was fast approaching in two years’ time and feeling that he had not accomplished quite enough in his life, began creating unsanctioned public art sculptures – street art. After struggling with low attendance gallery shows, Winterbourne was inspired by artists like Mr. Brainwash and Banksy. An old-world gentleman himself, originating from Chicago and former resident of Denver, Winterbourne’s first foray into street art installation was a specter in Cheeseman Park in Denver. He has been installing whimsical curiosities, such as the SteamBots, MechMonkeys, SkullBots, Boggarts, The Face and more, all over the U.S., Canada and the U.K. ever since.

Over the past Thanksgiving holiday, Winterbourne made a trip back to Denver where he installed his signature tiny SteamBots around Capitol Hill, Uptown and the Santa Fe Arts District. Preferring to remain an anonymous artist and adding to the mystique and magic of his art, Winterbourne will not reveal exact locations of his art installations. However, if one is adventurous with a keen eye for treasure, they may just spot one of Winterbourne’s many pieces around Denver.

303 Magazine was given the opportunity to correspond with The Impossible Winterbourne about the creation of his art, his love for steampunk and where to find future installations. Read below for the full interview. 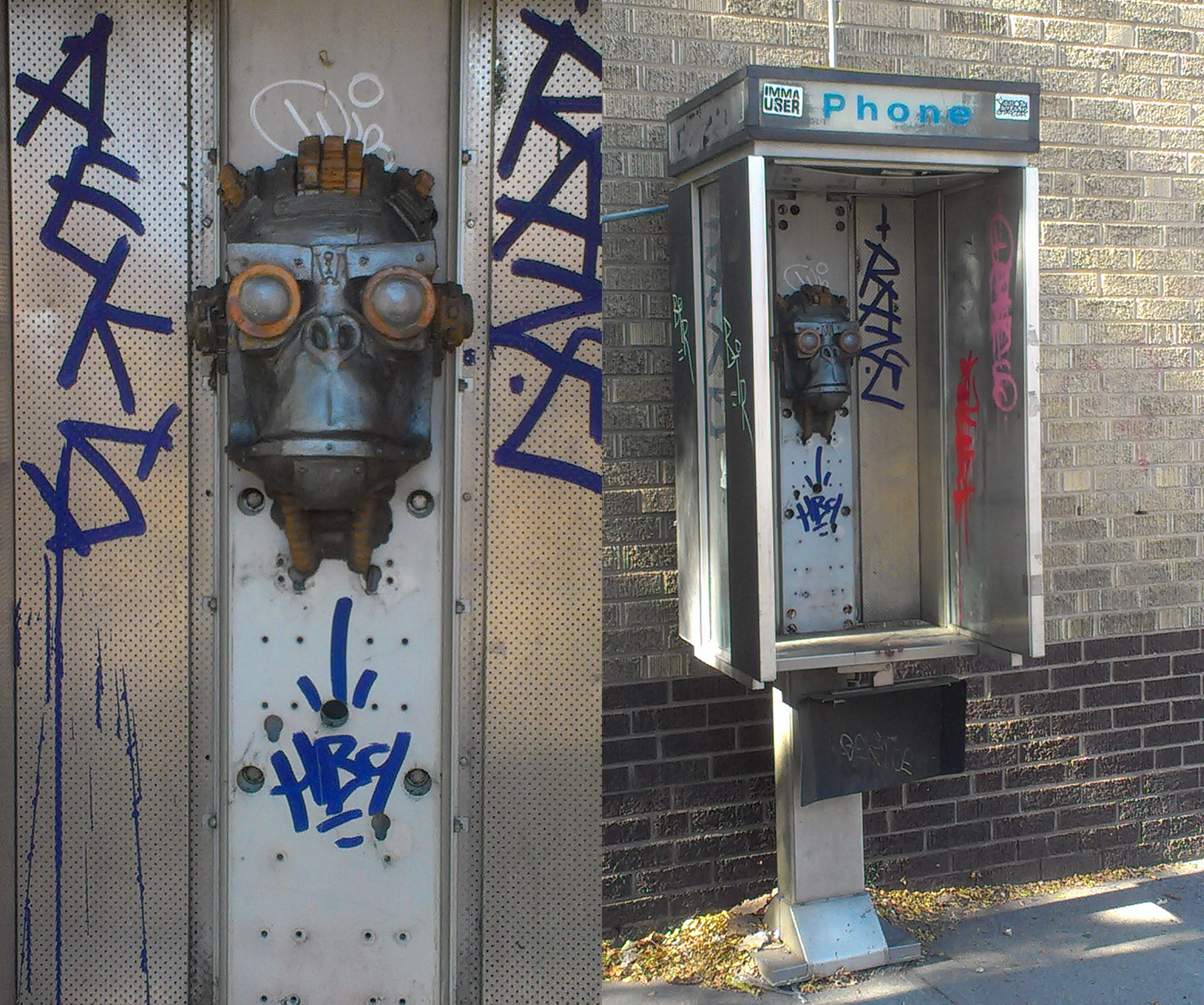 MechMonkey on phone booth. Image courtesy of The Impossible Winterbourne.

303 Magazine: How would you describe your work?

The Impossible Winterbourne: I suppose I would describe my work as little things that add a touch of whimsy to an ordinary world.

IW: I would say the longing to live a life worth living. It is a cliché, yes, but it is also true. Someday our great sun will explode and if all I did with my time was make money for someone else, I would truly be disappointed in myself. On the other hand, if I did something that brightened someone’s day, or made the world a somewhat more magical place, I would feel more satisfied with my station. 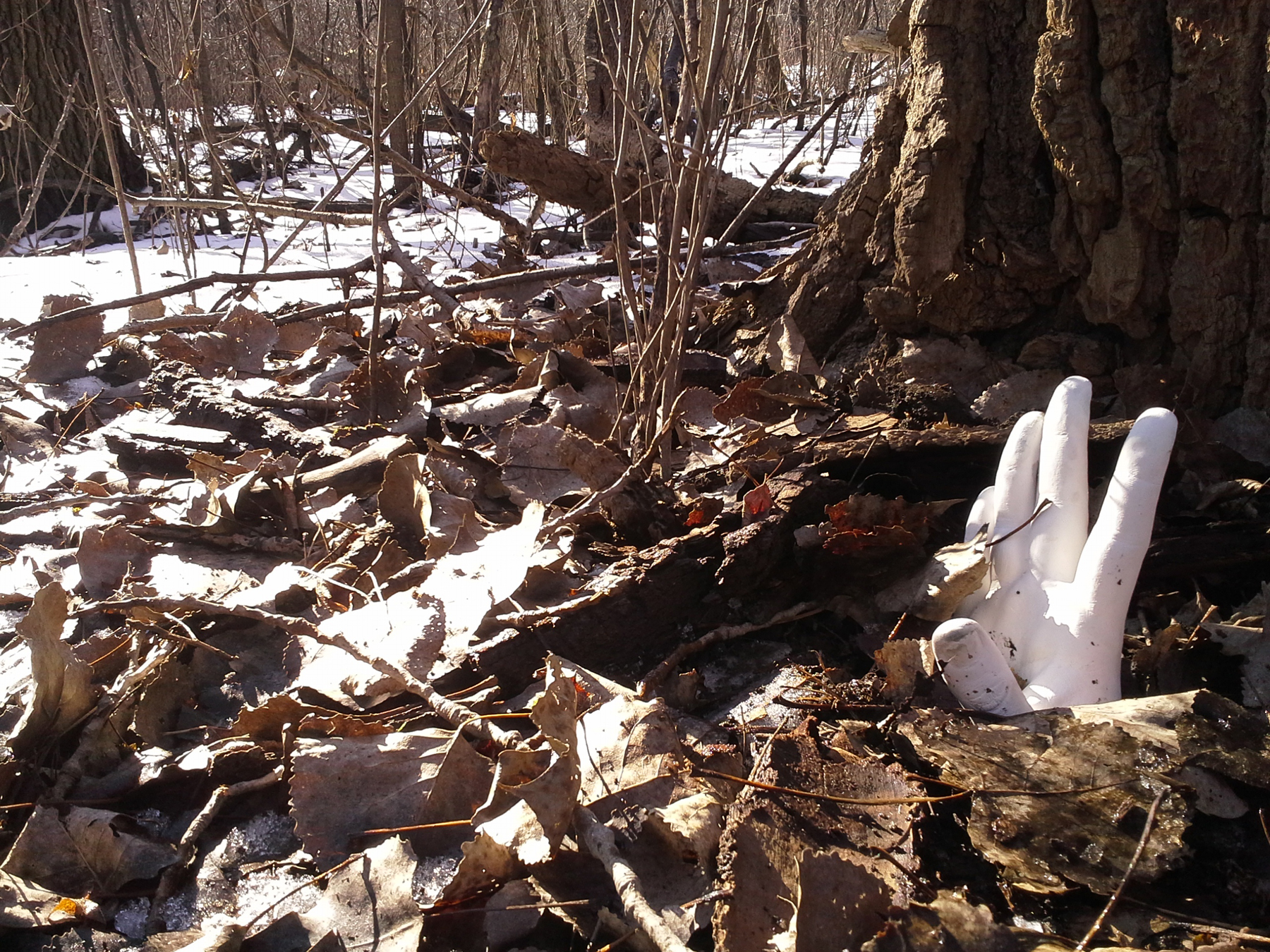 A hand reaches heavenward in The Winterbourne Woods outside of Chicago. Image courtesy of The Impossible Winterbourne.

IW: For the most part, I sculpt everything in clay. Then, I make rubber molds so that I can reproduce the sculptures in plaster, foam or resin. I use faux finishing techniques to make them appear to be cast in metal or stone. I use various adhesives to install them. Everything I install, I create from start to finish.

303: As an old-world gentleman, are you inspired by a certain era?

IW: Yes, I am very inspired by steampunk and things that were happening in the world around the late 1800s and early 1900s. The steampunk genre takes all those ideas and possibilities and runs with them.

Today, everything is boring architecture, open concepts and compact fluorescents. I prefer old Victorian architecture and Edison bulbs, though I despise the man himself. Edison was a villain and a thief. Nikola Tesla was the true hero of that era.

More than anything it’s a style choice. Gears and clockwork hold my attention more than circuit boards. 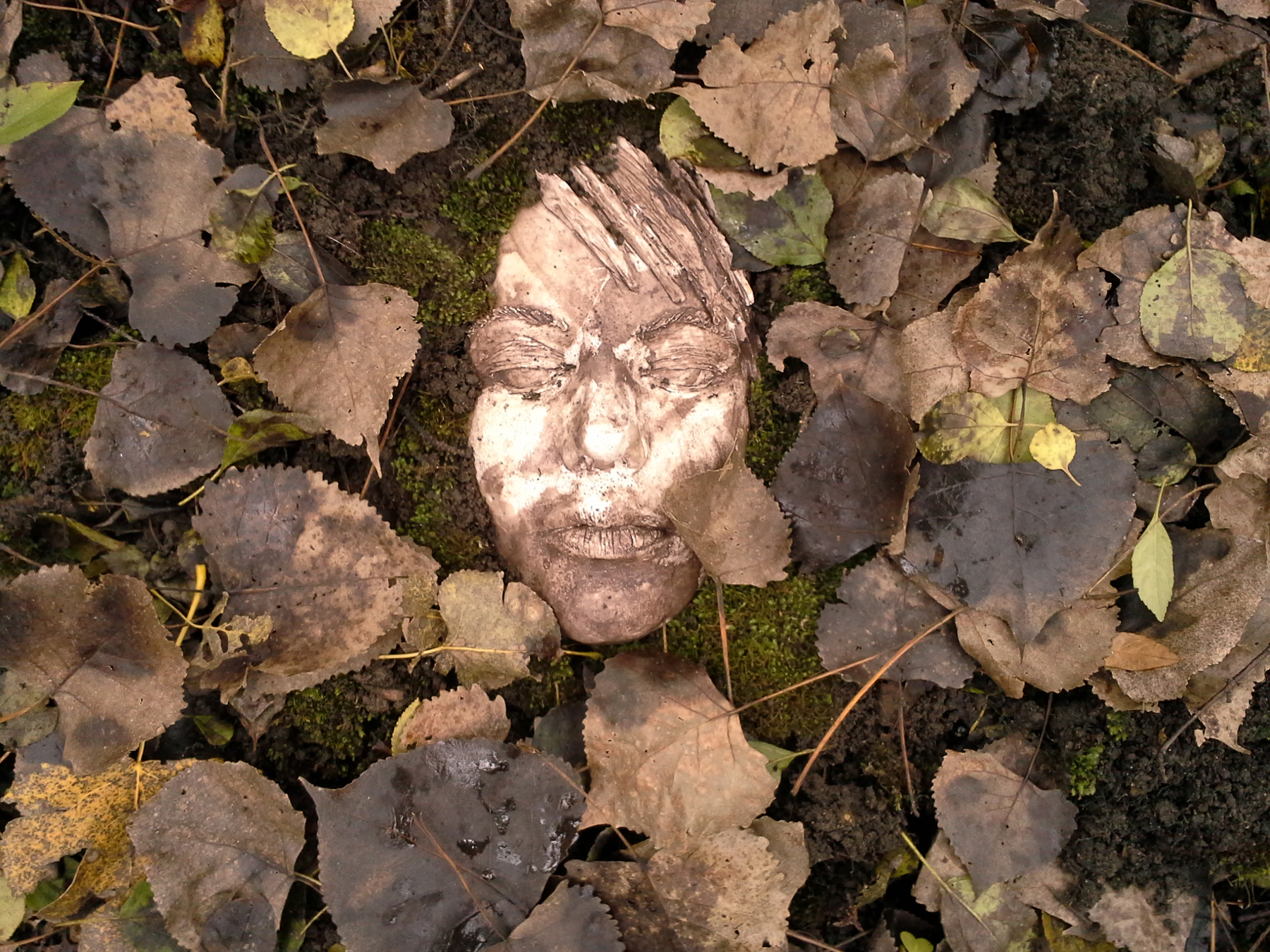 303: Do you strive to communicate any particular message with your art installations?

IW: I would say my message evolves. Different installations mean different things. One theme that runs through all of them, I suppose, is — Look around you! The world is full of hidden treasures. I make things now that would have delighted me as a child. Finding a face growing out of a tree, or a robot coming out of a wall would have set my wheels turning.

303: How do you feel remaining anonymous affects how your art is perceived?

IW: Of course, the anonymity adds to the mystique of what I do. Some of my works bare my icon, some do not. Through repetition, they have become synonymous with my name. I don’t know the first thing about [marketability]. Other people’s photos of my work get more attention than my own, which is good. It means the project is working without being associated with my name. People like mysteries. 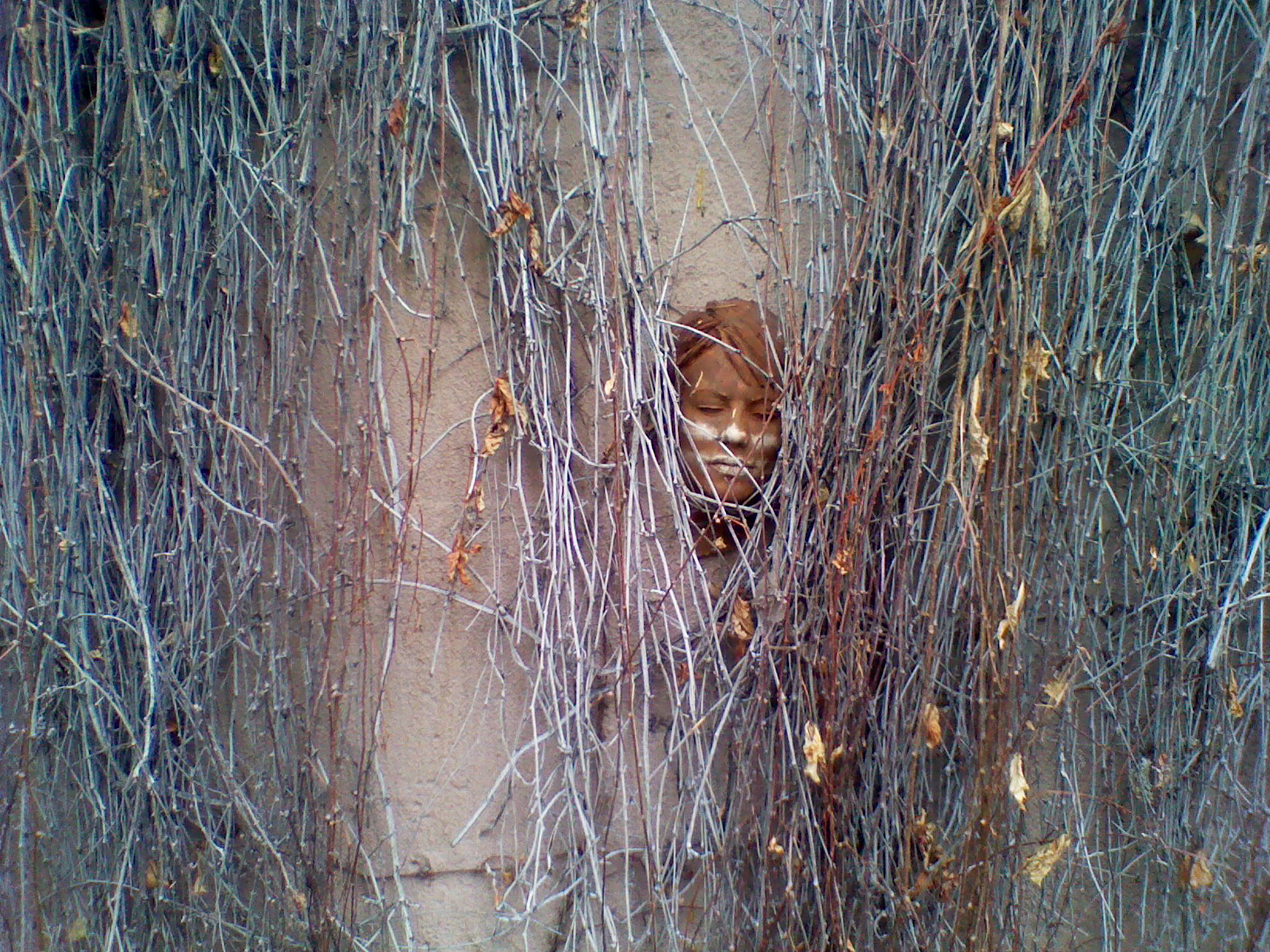 The Face hidden along the Cherry Creek Trail in Denver. Image courtesy of The Impossible Winterbourne.

303: Your art can be seen all over the U.S., Canada and the U.K., with multiple installations in Denver over the years. Are you originally from Denver or did you reside here for a length of time?

IW: I did reside in Denver for a while. Long enough, in fact, to consider it at least one of my homes.

303: What draws you specifically to Denver?

IW: Pablo’s Coffee. Other than that, I have a lot of connections here. Like I said before, I consider it one of my homes even though I no longer reside here. 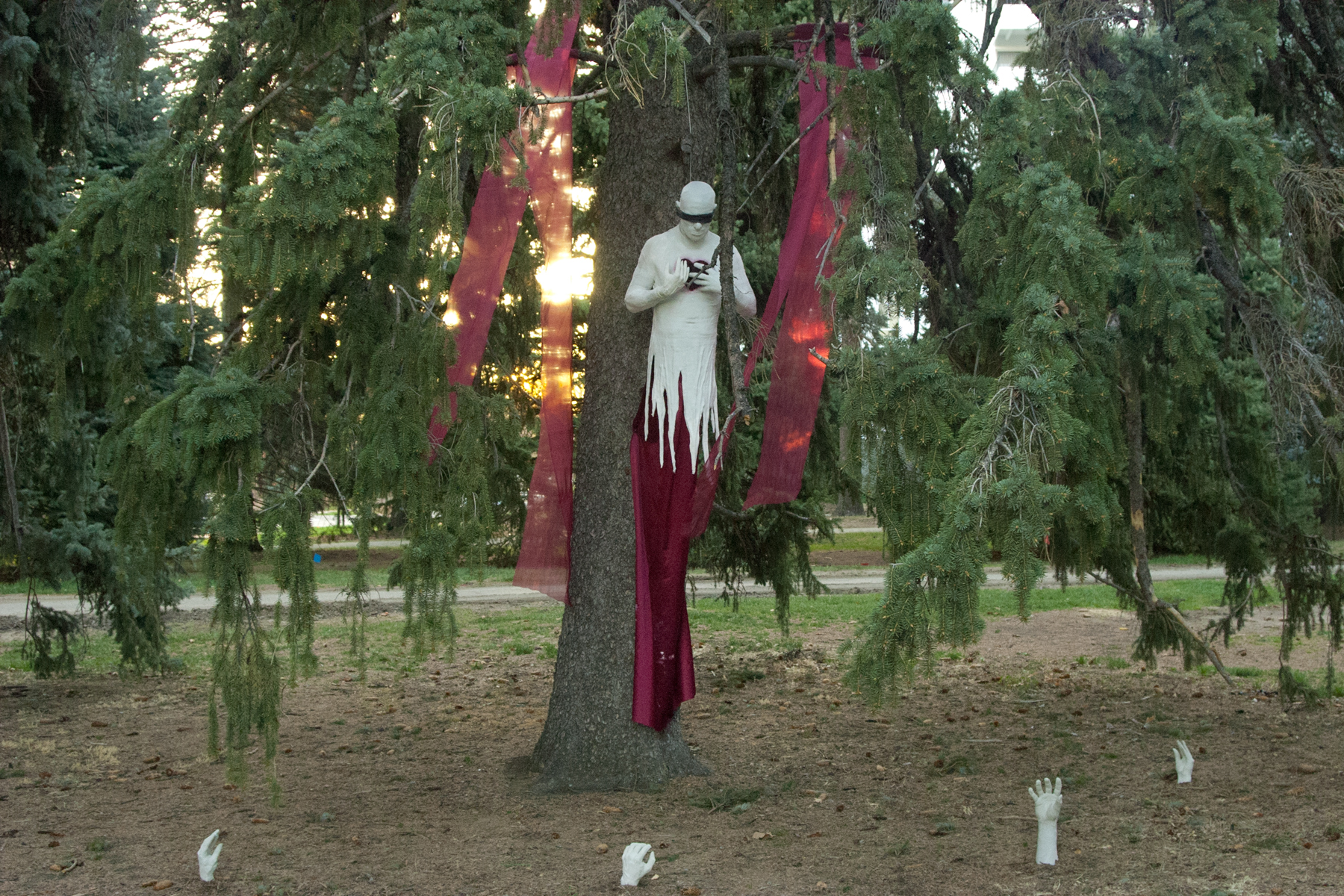 The Spectre in Cheeseman Park, Denver. Image courtesy of The Impossible Winterbourne.

303: What was your first installation?

IW: My first installation was the Cheeseman Park piece. It was a life-sized spectral figure wearing a blindfold with a heart shaped hole in his chest. I suspended him from a tree and surrounded him with several hands that came out of the ground. This one lasted the entire weekend and was taken down by the park service the following Monday.

After that, I moved on to the cardboard SteamBots. These were fun to do, but ultimately did not last long. 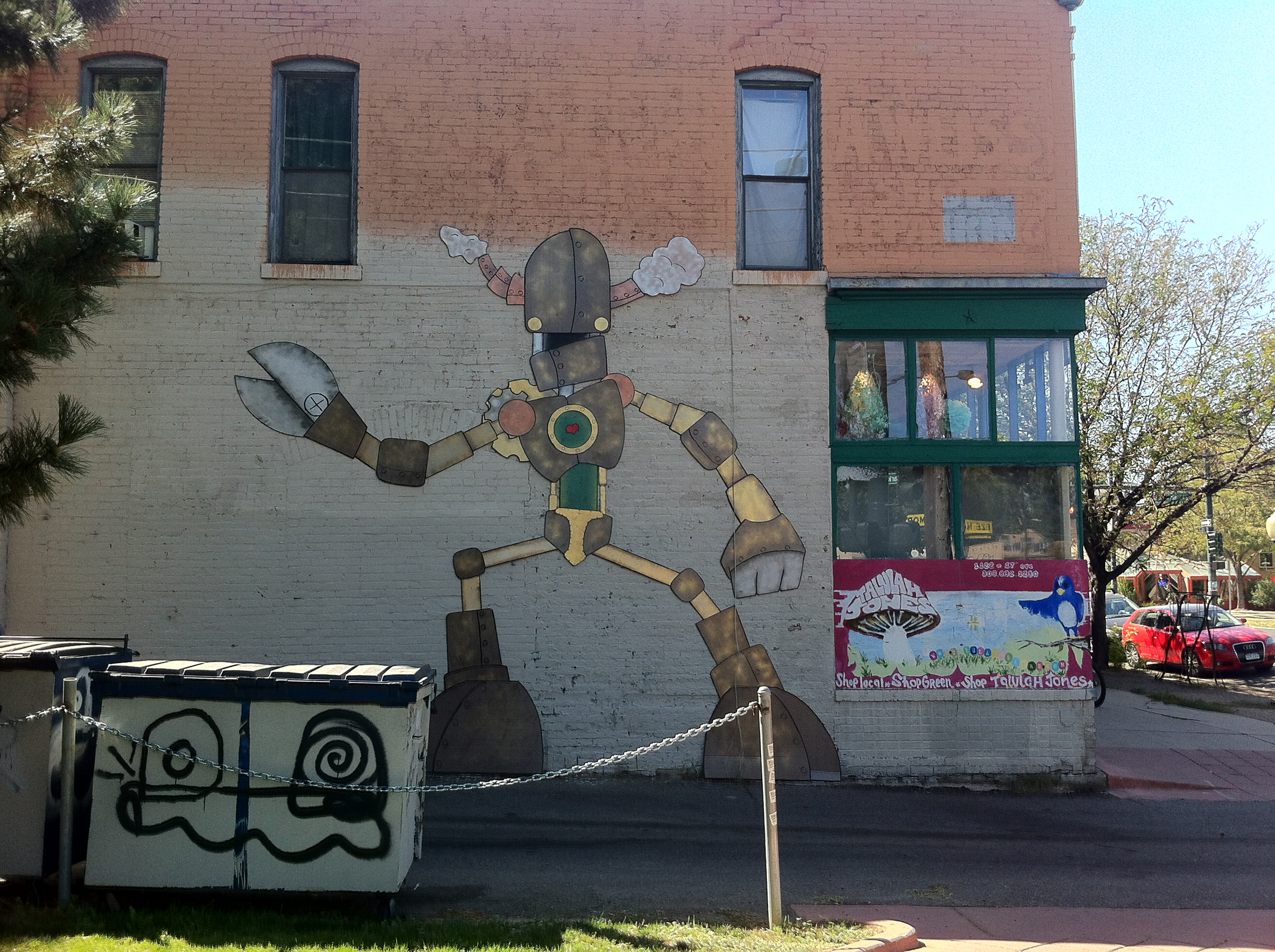 The ColossalBot. Image courtesy of The Impossible Winterbourne.

303: How do you choose where your installations will appear?

IW: I take a lot of walks. I wander around a place and find a good wall or tree that looks like it could benefit from the work. My intention is always to add to a place, never to take away. There is a fine line between street art and vandalism, but there is a line.

303: About how long does one of your installations remain at the location?

IW: This depends on the piece and the location. I have done installations in very public locations that have lasted years. Some of my first installations are up today. Some get taken down within a couple of days, but that is the nature of what we do. Nothing truly lasts forever. Street art is one of the most ephemeral art forms.

303: Do you take the surrounding environment into consideration when designing your art pieces?

IW: Certain things are created with certain environments in mind. Sometimes I will paint a piece to fit into its environment, like when I installed all the faces on the planters at the Sante Fe Art District, or did the street light installation in front of Illegal Pete’s on 16th Street. At other times, when I am traveling, or in a city I do not know very well, I will create a variety of pieces and try to find places they fit. 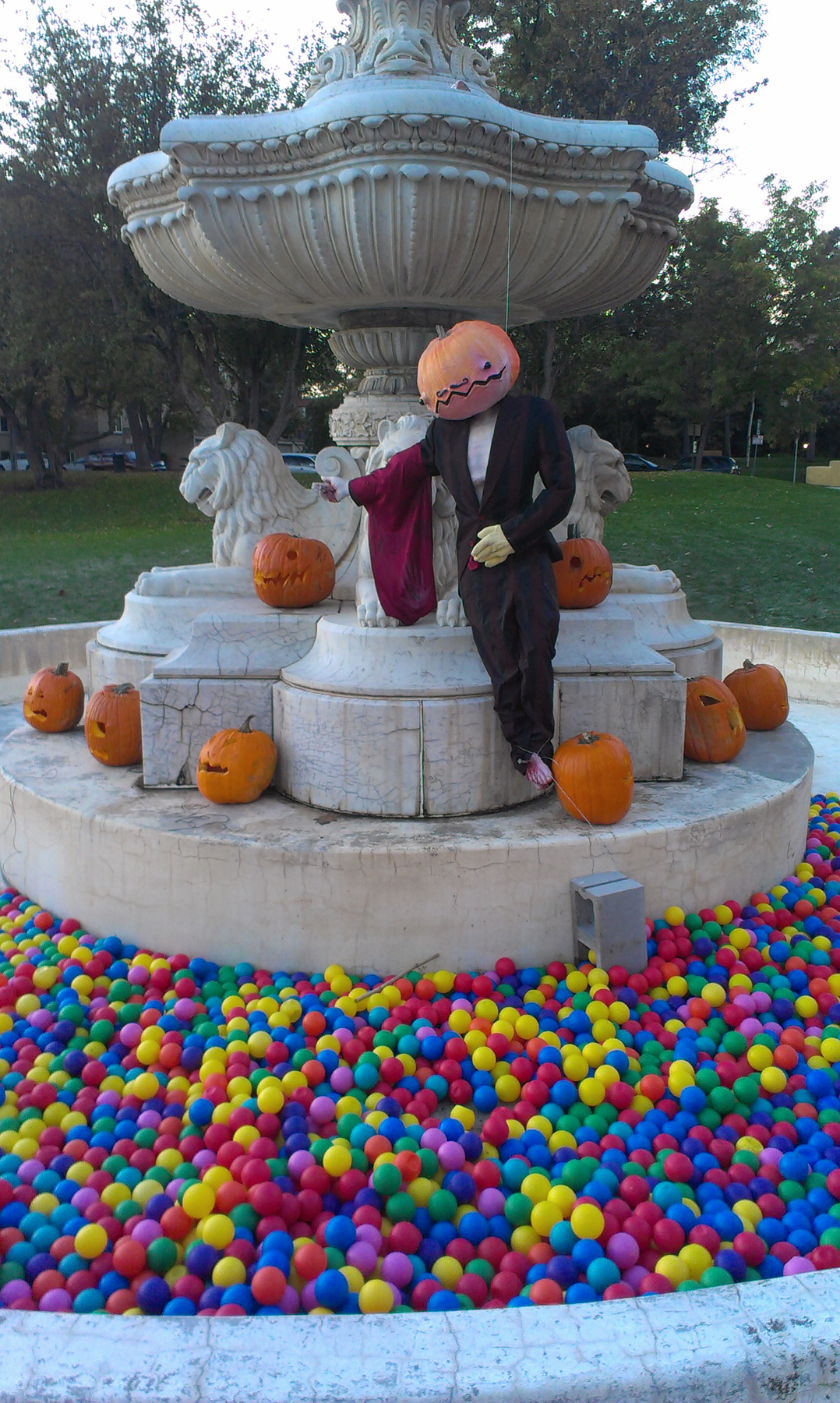 303: Aside from the small art pieces around the country and beyond, you have also done larger installations, can you tell us about some of those?

IW: [I did] a Halloween fountain installation in the Hungarian Freedom Park [in Denver]. That one was fun because we filled the fountain with colorful plastic balls and surrounded it with jack-o-lanterns. In the middle, I placed a pumpkin-headed figure in a dapper suit.

The Winterbourne Woods is an ongoing installation in a forest outside of Chicago. Every year I go back and add more faces to a patch of boggy landscape nestled between two forest paths. It is probably one of the most haunting installations I have done, a sea of faces emerging from the ground. 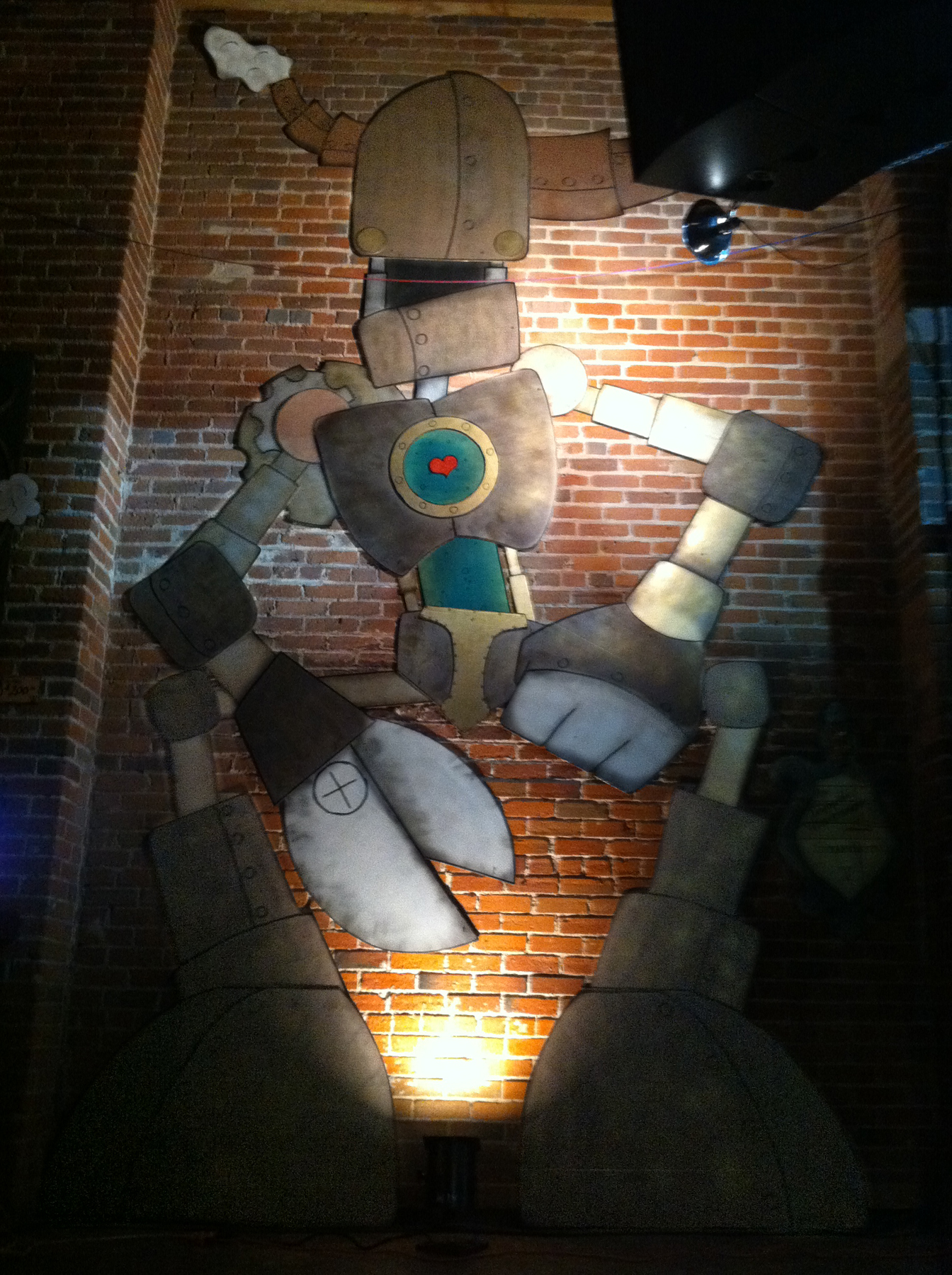 ColossalBot featured at Denver’s Artopia in 2012. Image courtesy of The Impossible Winterbourne.

303: You have also written a children’s book, can you tell us a bit about it?

IW: It is the most important thing I am doing right now. My first book is called, The AlphaBots, and it will be available by February 2017. It is a fully illustrated steam-powered alphabetic journey through the robotic creations of The Winterbourne Workshop. Style-wise it is akin to the cardboard SteamBots, though a lot more refined.

It is more of an art book than a children’s book, but children will love it. My latest sculpture is one of the characters, EcoBot, and he will be used in upcoming street installations.

Take a stroll through Denver’s neighborhoods and there’s a good chance you just might find one of Winterbourne’s hidden creations waiting to catch the eye of observant passersby.