Due to high demand for Young the Giant tickets on November 1, the band decided to give Colorado the gift of a two-night show at The Ogden Theatre extending their stay until November 2. 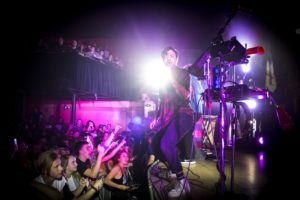 In 2004, five former high school classmates made the leap of faith to abandon their individual musical endeavors and join forces. They never looked back and eventually became known as Young the Giant. The Indie Rock group initially came together in the town of Irvine, California by their original name, the Jakes. The band includes five men by the names of Sameer Gadhia, Eric Cannata, Payam Doostzadeh, Francois Comtois and Jacob Tilley, including one vocalist, a drummer, two guitarists, and a bassist. Only five years after coming together, the Jakes became the opening act for Kings of Leon and shortly following the tour signed with Roadrunner Records. In 2010, the Jakes renamed themselves Young the Giant. To date, Young the Giant has three full albums, Home of the Strange (2016), Mind over Matter (2014), and Young the Giant (2011).

The evening started when the opening act Ra Ra Riot took the stage. The ensemble struggled in balancing the singer’s vocals with the volume of the instrumentation, making it difficult for the audience to comprehend the lyrics. As the set progressed, the crowd became antsy for Young the Giant to come on, and never appeared to fully engage in Ra Ra Riot’s performance. However, they redeemed themselves with their familiar song, “Water” as their farewell to the crowd.  The driving beat and lead singer’s falsetto gave the audience a hint of the band’s capabilities and restored Denver’s faith in their musical entertainment abilities. 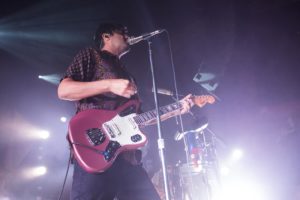 The crowd’s bottled-up energy exploded when Young the Giant took the stage. Rocking unique attire ranging from an eighties-styled neon jacket to a silk button-up shirt, the fans were visually stimulated. The set was decorated with vibrant mountains and flags duplicating the art on their 2016 album cover, Home of the Strange.

The audience came alive when well known single “Something to Believe in” was the second song of the set.  Gadhia does a tremendous job of engaging the crowd, from his original dance moves to his spontaneous playing of multiple instruments. In contrast,“Titus was born” brought a more melodic peace to the stage, instantly connecting with the audience. The lead singer shared the intriguing fact that this piece was originally composed in the town of Denver. “Cough Syrup”, a Spotify favorite with almost 70,000,000 plays, pleased the crowd as they joined in on the catchy chorus.  Towards the end of the track, Gadhia leaned down and let a few lucky fans belt out the chorus directly into his microphone, likely a moment they will never forget.  Before playing “Mind Over Matter”, Gadhia mentioned how excited they were to play two nights in Denver, and followed up by dedicating their next track to the Ogden audience.

“I know we have two nights here, which is absolutely amazing. Even though we’ve been doing this for a while now, it really never gets old. This one’s for you guys, this one’s close to us.” – Sameer Gadhia 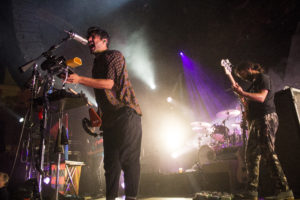 Ironically, Young the Giant concluded their set with “Nothing’s Over.” Doostzadeh, started a dance in the middle of the stage that involved quarter turn moves at the center of the stage. One by one, the rest of the band joined. Soon this was a synchronized motion that they repeated until the end of the song. This was the first time every band member was on the same page in terms of stage presence, which brought a unique feel to the show.

Ra Ra Riot came out for night two, switching things up with a great energy and connecting with the audience on a strong level.  The group seemed to be having all of the fun in the world on stage. 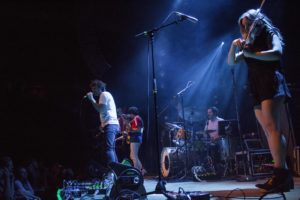 For night two of Young the Giant’s trip to Denver, Gadhia, showed up with yet another eye-catching get-up, wearing a bright orange jumpsuit, looking as though he had just wandered away from prison.  About half way through the show, Gadhia appeared in new attire, as though he had just broken through to the other side of freedom, personifying the lyrics,“Realize you’re a slave to you’re mind, break free” from the single, “Something to Believe In.”  The tone of the show began to mellow with a track repeated from the night before, “Titus Was Born,” and all the lights dimmed except for an abundance of bright white lights representing stars on the wall behind the stage.  The track “Apartment” followed and led into one of their most well known single, also played the night before, “Cough Syrup.” 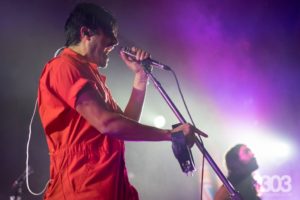 The group ended their set by playing, “Home of the Strange” off their 2016 album, two and a half minutes of controlled chaos. Tilley wore a mask that represented the face of a cat, while the remaining band members danced around every inch of the stage.  Gadhia added depth to their performance when he referenced back to their first show in Denver, which took place at the Larimer Lounge.  He gave thanks to the crowd for selling out a venue twice in the same stop. There was tremendous synchronicity and balance within Young the Giant’s performance that ended with an epic three song encore of “Amerika,” “Slivertongue” and “My Body.” 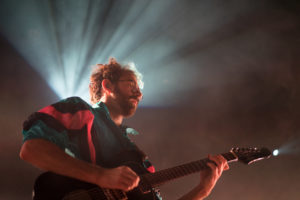 The Young the Giant show was consistently lively while connecting with the audience by making them feel a part of the show both nights. This two-night appearance was special for every guest that attended.  Even though the set lists were very similar, they each had their own unique vibe to keep the fans coming back for both performances.

All Photography by Kiddest Metaferia and Kenneth Coles. Check out full gallery here.