“I hope you’ve been drinking,” Anthony Bourdain said as he opened the last show of his The Hunger tour on Friday, November 18 at the Bellco Theatre in Denver.

Bourdain then began his monologue by addressing his long-time rival, Guy Fieri, and his opinion of Fieri’s myriad of what he deems to be sub-par and redundant cooking shows. In reference to The Food Network’s unimaginative Fieri-hosted shows, Bourdain said, “In some petri dish somewhere, they’re trying to grow Guy Fieri two-point-zero.”

Bourdain shifted gears and went on to detail some of the food personalities he admires, listing Andrew Zimmern and Alton Brown among his favorites. His admiration for Brown is shared by his nine-year-old daughter, Ariane, who is an integral inspiration in his life.

The release of his new book, Appetites, on October 25 coincided with The Hunger tour and is a collection of recipes Bourdain has concocted in his family kitchen for his daughter, his own childhood favorites and some greatest hits from his travels. 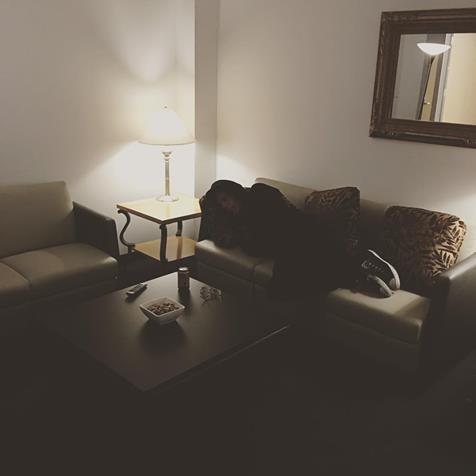 Being a well-traveled celebrity chef has given Bourdain a unique perspective on food, life, culture and politics flavored with his signature no-nonsense and brutally honest approach. His monologue, akin to a standup comedy show, was filled with witty and amusing insights into food culture around the world.

“There is nothing more political than food,” Bourdain said as he explored the cultural connection of food and politics.

Bourdain explained that the best way to see if a governmental system is working is to sit down to an average meal with an average family. In his hit CNN series, Anthony Bourdain Parts Unknown, he has done just that in some of the most politically divided countries around the world.

Balancing his political insights with his comedic food industry musings, Bourdain touched on a multitude of cultural food topics. He criticized the use of the descriptor “food-gasm,” “What the fuck is a ‘food-gasm’? Food and sex should be like church and State. Separate.”

“Craft beer.” Bourdain said those two words and the Denver crowd grew instantaneously tense. He went on to describe his bewilderment at one of the most popular trends in bars and restaurants today.

“A bar is not a place to get analytical,” Bourdain said of his observances sitting in a full bar with people huddled around flights of craft beer taking notes. “I considered grabbing the bartender by his man-bun and ordering a Bud Light,” Bourdain said to the crowd’s amusement.

Believing that food should be experienced in a simple, yet transformative way, Bourdain continued to point out the failings of food trends like gluten-free, house-made and pumpkin spice. “Please keep it out of my beer,” he said on the topic of pumpkin spice popping up like a venereal disease.

Bourdain’s monologue show jumped around from heavy to light food-driven topics, and was offered up with a side of his irreverent and honest perspective that has been shaped over 40 years in the food business from dishwasher to chef, author, to host of popular food travel shows. After a brief time addressing frequently asked questions, like what’s the worst thing he’s ever eaten, the answer being “Johnny Rockets,” Bourdain opened the floor up to a mediocre Q&A session.

“I forgot, marijuana is legal here,” he quipped as a response to being called a dick for telling wanna-be chefs to leave Denver and go to Europe and one woman’s invitation for Bourdain to attend her wedding.

The Hunger‘s thought-provoking and provocative monologue was thoroughly entertaining. Bourdain served up a unique menu of life experiences and a raw, unfiltered perspective on food and culture.

303 Music Is Back with The String Cheese Incident, Big Gigantic, Brent Cowles and More