The idea of five-college friends forming a reggae-rock band out of Boulder, Colorado sounds a bit like a ’90s dream, but local favorites Na’an Stop are making it come true. With their longboards in tow, these pals have received serious accolade for their debut release From the Deep. With their recent tour and release of new single “Questions” 303 Magazine had to get them alone to answer a few of our questions. Do not miss their funky answers below and definitely do not miss their upcoming shows at Cervantes and Fort Collins.

303 Magazine: Obviously you have a creative name. Where did that come from?

David Halvorson: When we first came up with a band name like, five and a half years ago, we wanted to do something different. The term Na’an Stop means that music is a part of our lives constantly. We wanted to spell it in a funky way and give a little flavor to it. We went with the Na’an, which has turned out to be kind of a marketing disaster, just because the apostrophe doesn’t do well in URL or hashtags, but it is what it is. We had fun with it.

303: How did you all meet at CU Boulder? Any quirky stories?

DH: Three of the guys — Caton, Tom and Joe — used to jam together freshman year in the dorm rooms. Those guys have been jamming together just as a trio for really long time. I joined Sophomore year, just playing house party shows with people. Junior year, Patrick rented a trombone and I rented a trumpet and we had a whole band together.

(David takes break to parallel park RV while remaining on phone, 303 is impressed.)

303: Living life, acting on your own terms and taking what you’re doing to the next level are all a part of your mantra as a band. How did you come to live by these rules?

DH: That means keepin’ it one hunnit. Or keeping it real. Be true to yourself, at least that’s what we like to be.

Caton Smith: That sort of philosophy speaks to the way I’ve been living my life. I don’t feel pressure to follow a specific career path. Adventure and happiness are what is guiding my life right now.

Patrick Mullholland: You know, college is one of those times where you get to decide where you want to go in the next step of your life. I think that pivotal moment for all of us is when we graduated and decided to actually go this route. Right before you graduate there is all of this anxiety and pressure to do something that is a “good career choice,” so to stick together as a group and not lose any members is quite an amazing thing.

303: You cite reggae, rock, ska, hip-hop and dub all as your musical influences. What would you say is your biggest influence as a band?

CS: We’re all from different parts of the country and different states, and listened to various types of music growing up. Personally, my influences are coming from the Reggae/Rock genre. Sublime and local artists from Hawaii, I just grew up listening to Reggae on the radio at all times.

DH: I think while playing live, we just want to get it going and whatever genre is achieving that goal at the moment kinda works best. So, inspiration comes from whatever works. 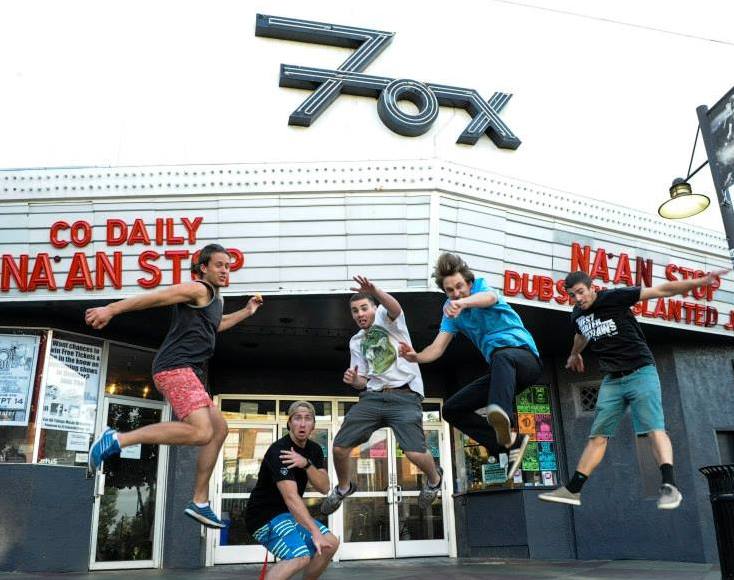 303: What is the quirkiest habit you have while touring?

CS: Well, Patrick is clipping his toenails right now. Also, Patrick has a tendency to spout off knowledge. He’s got a very deep, deep knowledge based on all different types of subjects. Just moments ago, Patrick was telling me all about falconry, and why Colorado is a good place for it.

DH: Well, we have a hang board on the side of our RV, actually. It is for rock-climbing wrist strengthening. So, when we’re pulled over at the gas station, you can do pulls ups to keep the deltoids and the lats firm. Or, when we pull over at the gas station we will throw the football. We’re kinda like a bro van. Just kidding.

We cook. Whenever we pull over to cook, no matter what meal, whoever is cooking takes on a character when they’re the chef. I have my own restaurant and Caton has his own restaurant, so we all have our own theme. We really take the characters and grab onto them.

303: You have played all over now. What is your favorite part about coming home to Boulder?

Joe Pesa: Um, getting to shower every night. I don’t know, Boulder is always going to be one of our favorite places. I feel like no matter where we go, everyone tries to compare it to Boulder. I just feel like over time we come back, I realize how much we take it for granted.

PM: The thing about Boulder for me is that there are just so many things to do in so many different types of lifestyle. I would just lose track of time and not even realize it. Especially when you’re gone for a period of time and you learn to appreciate that place even more. We all love the mountains and I try to get into the woods as much as I can when I’m home.

303: What was it like receiving so much success from your 2015 album From the Deep?

DH: You know, it was pretty awesome. We didn’t ever think we would get that much love. There is a strong amount of support that went on for weeks after that release and that was really cool and inspiring. Our album was sitting right next to Bob Marley, which is kind of a trippy thing to think about. We’re essentially no one, just some guys from Boulder and our name is up there.

CM: Just to touch on what Dave said, just to see our name next to Bob Marley, Rebelution and artists that we really look up to and have been listening to for a while, that’s just really inspiring. It never gets old to see your name up next to your role models.

303: Your last single came out recently. Can we expect more releases this year?

DH: This year maybe, definitely next year. We are generously supported by a Kickstarter and we just raised a bunch of money to record. So we will definitely be recording within the next few months. We have an EP that we will release in the Spring, so we’re going to have to hold off on the single releases.

303: How do you gather inspiration to write music?

PM: The music in general is quite collaborative and collective. We have been the same members for so long, and everyone contributes. As far as writing the lyrics goes, it isn’t necessarily the ones writing that are the ones singing. It’s nice to have most people writing because the pressure doesn’t fall on one person to make or break everything.

CS: It’s nice having more people bringing that to the table. It varies per person, we have a lot of life experience to draw from and a lot of different paths. Now we’re a little more converged.

303: What can Denver expect from your Cervantes performance?

Together: A darn party and a good time.

The band will be coming from sixteen shows previously occurring in the weeks before their Cervantes headlining show, so they expect to be dialed in. Are you? If not, nab your tickets here and get ready for some non-stop Na’an Stop!