We Tried It – A Self Guided Tour of Colorado Ghost Town St. Elmo

After watching an episode of Westworld this past Friday night, my mind was spinning with accumulating questions that slowly developed into a twisted longing for my own creepy western-themed adventure. Luckily, I live in Denver and so do you, and we have an array of creepy ghost towns right in our own backyard and just in time for Halloween. So I decided to head to St. Elmo.

St. Elmo is a ghost town and the best-preserved ghost town in all of Colorado. St. Elmo also boasts the most hauntings and paranormal activity of any ghost town in the state.

Heading up to St. Elmo is a beautiful drive with scenic bypasses along the journey. Once you arrive you can sense the history of this town. It is now privately owned with part-time inhabitants but the town itself was a major gold and silver trading center and the hub of life for many pioneers, outlaws and miners for decades.

How To Get There

St Elmo is located 20 miles southwest of Buena Vista and sits at over 9,900 feet in elevation. Take Highway 24 to County Road 162 and follow this picturesque scene for 19 miles to St. Elmo. When you arrive, head down Poplar Street and keep your eyes open and your mind clear. You could meet a variance of lost souls along the way.

What Not To Miss

The General Store and Home Comfort Hotel are two places you have to visit. Along the main drag name Poplar Street in St. Elmo these two buildings are maintained nicely and are decorated with lace window coverings. The eerie calm of these windows sent shivers up my spine and while I would have loved to have seen “Dirty Annie” (explained below) looking out from the upstairs window, I did not want to provoke her. The current part-time residents of St. Elmo claim that they know Dirty Annie would protect their town, but fear they don’t know how far she would go. 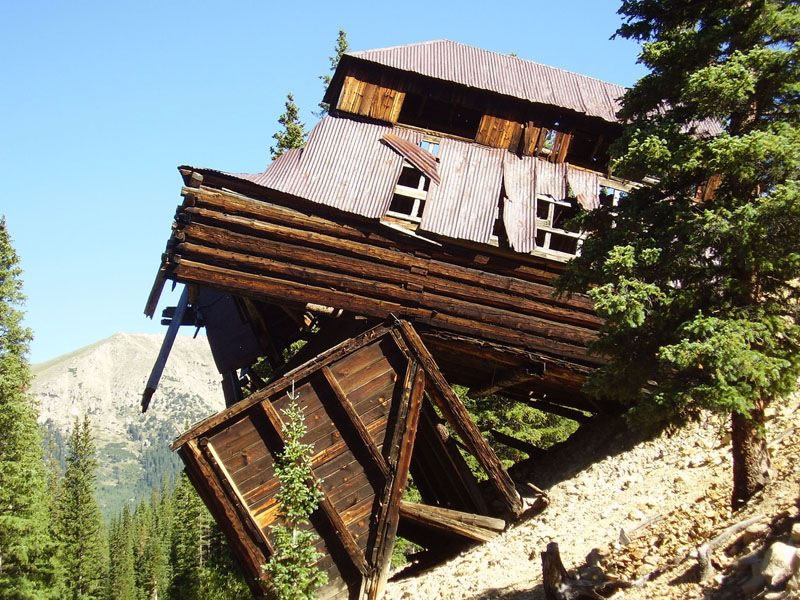 Originally called Forest City, St. Elmo was settled in 1878 and became an official township in 1880 with the arrival of the first post office. The residents of the town were forced to change the name because there were already too many Forest Cities in the area. St. Elmo went through a massive gold rush reaching the height of its population of 2,000 residents in only 10 days. The majority of the town worked in one of the four local mines. The Mary Murphy Mine was the most profitable mine and the longest operating.

The Mary Murphy Mine recovered over $60,000,000 worth of gold while it was in operation.

When the mines began to close down the town began to dwindle alongside. The Mary Murphy Mine continued to operate until 1922 and shut down when the railroad was abandoned.

The Haunting of Annabelle Stark – AKA “Dirty Annie” 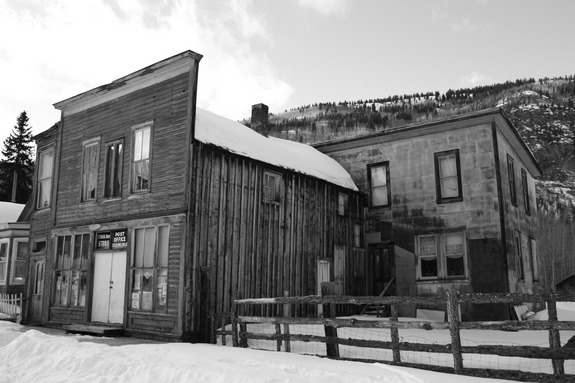 The most famous ghost of St. Elmo is Annabelle “Dirty Annie” Stark. Annabelle is the descendant of Anton and Anna Stark who arrived in St. Elmo with Pacific Railroad in 1881. Anton was a section boss in the mines while Anna ran the Home Comfort Hotel located on Poplar Street and the general store. Both structures are still standing today.

Anna Stark was known as a cruel and harsh woman who never allowed her three children, Roy, Tony and Annabelle out into town to mingle or work alongside what she deemed the simple town folk. Annabelle grew up attractive and passionate for the town and her love of St. Elmo was fierce. After the death of her mother Annabelle and Tony inherited the Hotel and the once impeccably clean establishment fell to shambles.

Along with the decline of the town, Annabelle began to lose her grasp on reality. The town soon called her “Dirty Annie” as she would often come out in filthy clothing and her hair in a tangled mess. Finally, free of the harsh rule of her mother, most assumed this was her quiet rebellion. Residents remember her strolling the main street with her shotgun loaded and hung over one shoulder ready to protect the town from anyone who dared to threaten it. Since her death, it is told she still can be found roaming the streets. 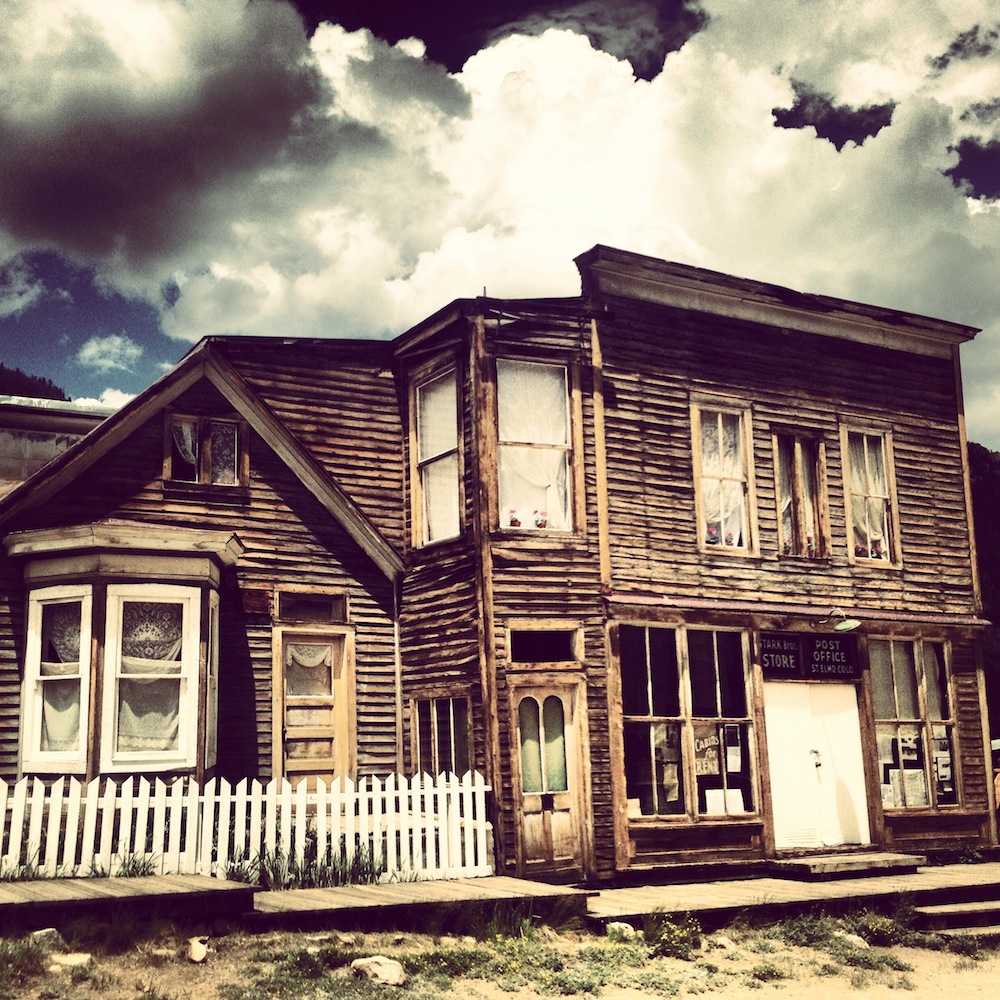 Only a short while after Annabelle had passed away the hotel was left to a family friend whose grandchildren were playing inside the hotel. Suddenly all of the doors slammed shut and the temperature dropped 20 degrees. The children cried and screamed and finally the room returned to the outside temperature and the door releasing slowly swung open.

A woman skiing down Poplar Street at dusk was struck by a peculiar sight of a lovely looking woman in a long white gown glaring out of the second story window of the Home Comfort Hotel. The skier was shocked; she knew the owner of the hotel was on vacation and that no one was supposed to be inside. As she turned to see what the woman was eyeing, she noticed snowmobiles approaching. Snowmobiling is illegal in St. Elmo so the skier went and advised the group who promptly apologized and went on their way. When she turned back to look at the hotel the woman in the window still watching lowered her head, nodded at the woman, turned and vanished before her eyes.

Curious and in disbelief the skier went back the next day to find every window and door were locked. When the owner of the hotel returned, the two women searched the property with nothing to be found. 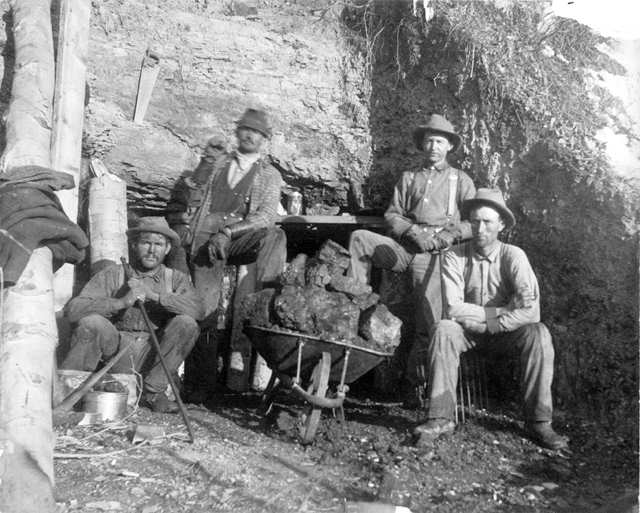