STRFKR was formed by Joshua Hodges in 2007 and since then they’ve grown quite popular in the indie music scene–probably more than they ever really wanted. Designed to remain unpopular, or as the band calls it, “success proof,” STRFKR doesn’t seem to care what other people think about them or their music–well, except for their fans of course. Hodges’ hard work isn’t just for the fame or popularity, rather he puts in the extra effort to show some love for his audience whether it’s signing merch after the show or truly optimizing STRFKR’s live performance.

“I felt like I wanted to make an album that would translate well to a live show and I think this one does.” – Hodges

303 Magazine had the opportunity to check out their new album Being No One, Going Nowhere. It only took two listens or so to get undeniably addicted. The album is more pop-influenced than 2013’s Miracle Mile but still contains STRFKR’s original elements like dark and existential vocals paired with fun music, as well as catchy repetition and irresistibly movable rhythms. The new album Being No One, Going Nowhere is due out on November 4 but you can order it online now and receive a download code to listen to it early. It’s currently priced as low as $8 and available in a variety of formats. We recommend the slick blue and purple vinyl. As you let the synthy sounds sink in, check out our interview below with Hodges himself. 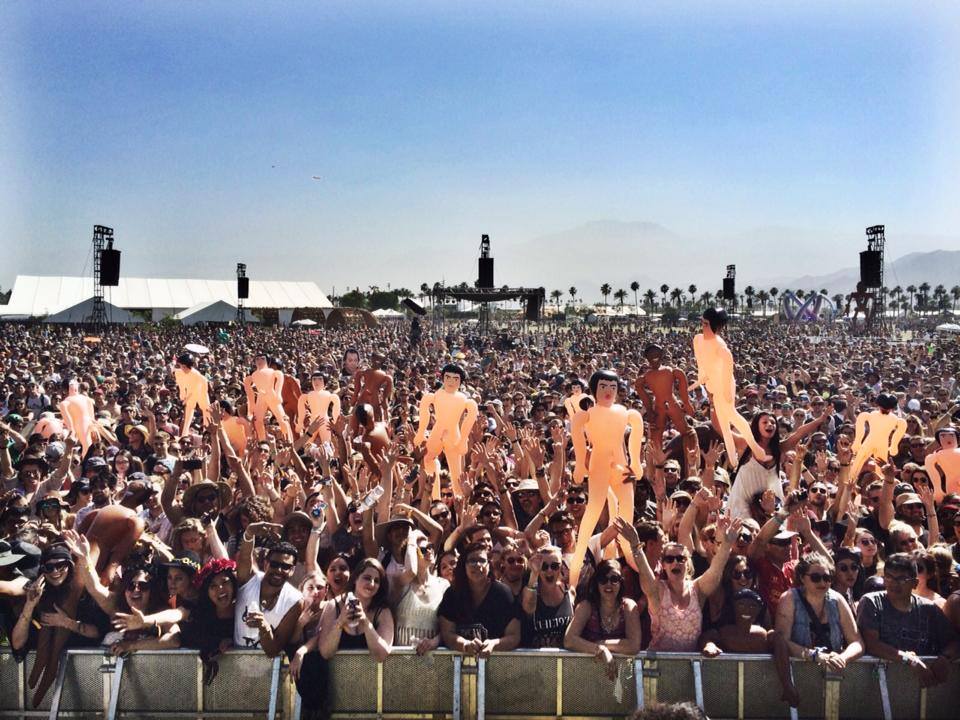 STRFKR is known for a wild live performance. Coachella. Courtesy of STRFKR on Facebook.

303 Magazine: What are you most excited about with the release of Being No One, Going Nowhere?

Joshua Hodges: I don’t know. This is the longest that I’ve ever taken to finish and put out an album. For me, it just felt good to finally finish it. I felt like I wanted to make an album that would translate well to a live show and I think this one does. We just played our first show last night and we’re playing a lot of our new songs. It was really fun.

303: This album’s name paraphrases the title of a book by Ayya Khema, a Buddhist nun. What made you choose it?

JH: I read a different book by her and just thought her story was really inspiring. She grew up in Germany during the Nazi occupation of World War II and had to flee and came to the U.S. She was just a very inspiring person and after reading that book, I really liked the idea of a goal or mantra or reminder of the virtue of not trying to be anyone special. Some of it came from this way that gets people into trouble so often–like, the desire just to be somebody important or to be known can be so destructive and lead people to do really terrible things for notoriety. Like a macro/micro level with little kids acting out or people committing crazy crimes to be known. It [the title] was like a reminder for me.

303: You previously stated that “Tape Machine” had already been recorded for another album but didn’t make the cut at the time. “Never Ever” came out quite some time ago, but is also featured on the album. Tell us about your process with forming this album?

JH: “Tape Machine” I actually recorded for a totally different band with some friends in Amsterdam. So that song is kind of its own thing on the album. It was written with two other guys who aren’t even in STRFKR [laughs]. The rest of it was written in Joshua Tree, the desert. We have a house out there that’s kind of our practice and storage house. It’s out in the middle of nowhere, we could play for 24 hours a day if we want to. There’s a certain vibe out there in the desert that is lonely, in a cool way. Like a feeling small and feel your place in nature thing. A lot of the songs on the album have a darker vibe which maybe comes from that.

303: What were some of the challenges you faced when creating this album?

JH: It took me a while to even get to this album. I started a few different projects and then changed my mind about them being right for STRFKR so that was the hardest part. I still want to finish the other projects I’ve started. I have an r&b kind of vibe and then a more mellow batch of songs. I just don’t know what to do with them.

303: Tell us more about your other projects. Will they be STRFKR related or entirely separate?

JH: I may have different names for different projects. There are a few things in the works for STRFKR that I think will happen next year, but I have some other stuff I don’t think I’ll use that name for like the Dutch project with the guys in Amsterdam. We actually don’t even have a name for our project we just try to finish these songs [laughs].

303: Tell us more about your future plans with STRFKR – Can we expect more albums?

JH: Yeah, next year we’ll probably release a live album. And then we’ll also release some demos that I just never finished and never will finish so I’ll release them all for anyone interested in that kind of thing. Also, we’re planning on touring a lot next year. I’m sure I’ll do another album.

303: Your live shows are known to be quite exciting, from the great lighting to dancing astronauts. Will there be anything new on this tour?

JH: Yeah we have a new member who’s joining us. We have this one position that’s been like a rotating position. But I think each time someone new plays a set they bring their own style into it and that’s exciting. And then we have a bunch of new songs and a homemade light wall made of greenhouse siding with lights running through. Keil, the drummer, programs the lighting that we have so it syncs up with the show. We’re pretty hands-on and try to do everything ourselves.

STRFKR will be playing at the Gothic Theater on Thursday, November 17 with Gigamesh and Psychic Twin Tickets can be purchased here.