Local legends Wheelchair Sports Camp are taking their show on the road. But they’re pretty modest about it, despite the fact that they just released their first-ever full length album and signed on with Strange Famous Records, owned by Sage Francis. Strange Famous Records prides themselves on representing artists that other labels may find “too risky or too weird.” And Wheelchair Sports Camp fits right in.

WSC’s album No Big Deal just dropped on September 30 and the trio has already packed up the van and hit the road, prepared to take the Southwest by storm with their unique brand of experimental hip hop. And did we mention No Big Deal was produced by the late and great Ikey Owens (Jack White, The Mars Volta)? It was one of his last projects before his untimely death in 2014.

But fear not, Wheelchair Sports Camp fans. You too, shall have a golden opportunity to catch the No Big Deal Tour, here at our very own Oriental Theater on Wednesday October 19 at 8 p.m. (with B. Dolan). You can buy tickets in advance here for $15. Consider this your opportunity at redemption for missing their recent banger of a show at Ophelia’s last month. (Unless you were there, in which case you already know better than to miss this event.)

Frontman, emcee and resident shit-talker Kalyn Heffernan’s got a sharp tongue, spitting clever lyrics that range from snarky and amusing to blunt and political. She raps over a combination of both live (Joshua Trinidad on trumpet and Gregg Ziemba on drums) and electronic music. Kalyn took some time to talk to us about her favorite tracks off of No Big Deal, how much she loves being B. Dolan’s hype man and how she’s made it her personal mission to let people know that Denver is so much “more than weed, beer and CrossFit.” Amen, sister.

303: Where are you most excited to play on this tour?

Kalyn Heffernan: That’s a hard question, ‘cuz there are so many good ones. First we’re playing Albuquerque with some of the baddest bitches I know. Chicharra is this three-piece amazing crew of women, plus Ebony Isis Booth will also be there. She’s this poet that I adore. I just love Albuquerque anyway, but this lineup has me so geeked about our show there. And Meow Wolf, ‘cuz duh… and we’re playing with Nick Hook, who is this amazing DJ/producer. The Tijuana show will be our first time in Mexico, and we’ve been meaning to make it down there for a while now

And Long Beach ‘cuz we had to cancel our last show there (during our last tour) for an emergency room visit. Plus our album just dropped, which was produced by the late Ikey Owens, who’s Long Beach proper. No Big Deal was mixed and mastered in Long Beach, and we’re so ready to go there with this album. 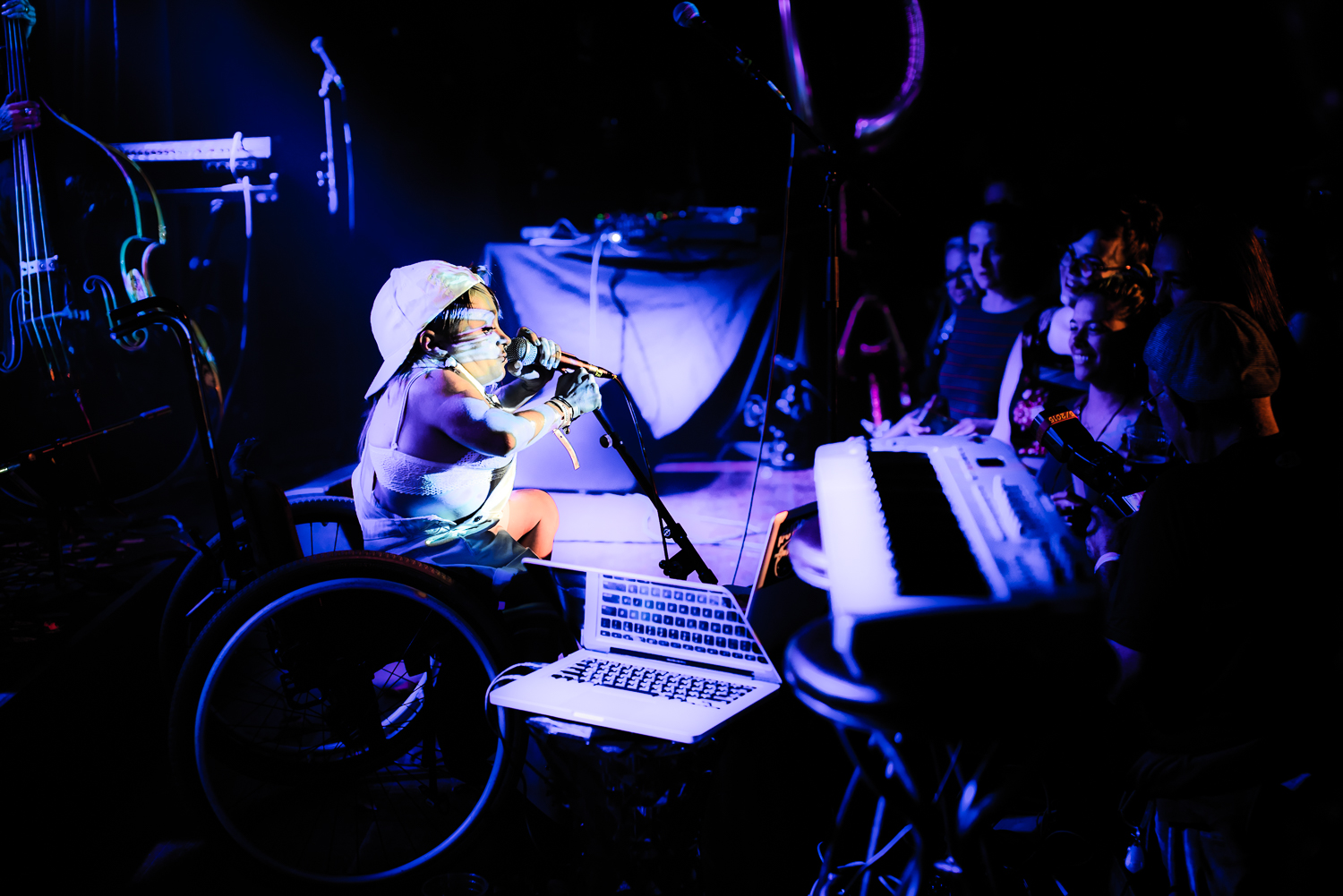 303: What attracted you guys to sign with Strange Famous Records (SFR)?

KH: We’ve been Strange Famous family since 2012. B. Dolan took us on our first tour, then I got a bunch of us arrested in Texas and he bailed us out. We’ve been besties ever since. Sage Francis and B. have really repped us hard and we’ve toured with them extensively. Ikey Owens wanted us on SFR and we’ve played with Sage before, so it was a no-brainer. It was bound to happen.

303: What’s the coolest part about playing shows with B. Dolan?

KH: B. is by far my biggest mentor. He has really pushed me (literally) to put on better shows, to write better lyrics, put out better merch, play bigger shows and he expects more out of me than I sometimes expect out of myself. We’ve toured together so much that it’s just like a family reunion every time.

There’s never a dull moment on a B. Dolan/Wheelchair Sports Camp tour. We’ve been in trouble with the law; I broke my arm on tour; we eat like kings and everything in between.

We now have this new tradition of getting tour tattoos, which I’m always excited about. He’s a hell of a bodyguard when we mob around and sometimes he let’s me be his hype man — which is all I’ve ever wanted to do in life. 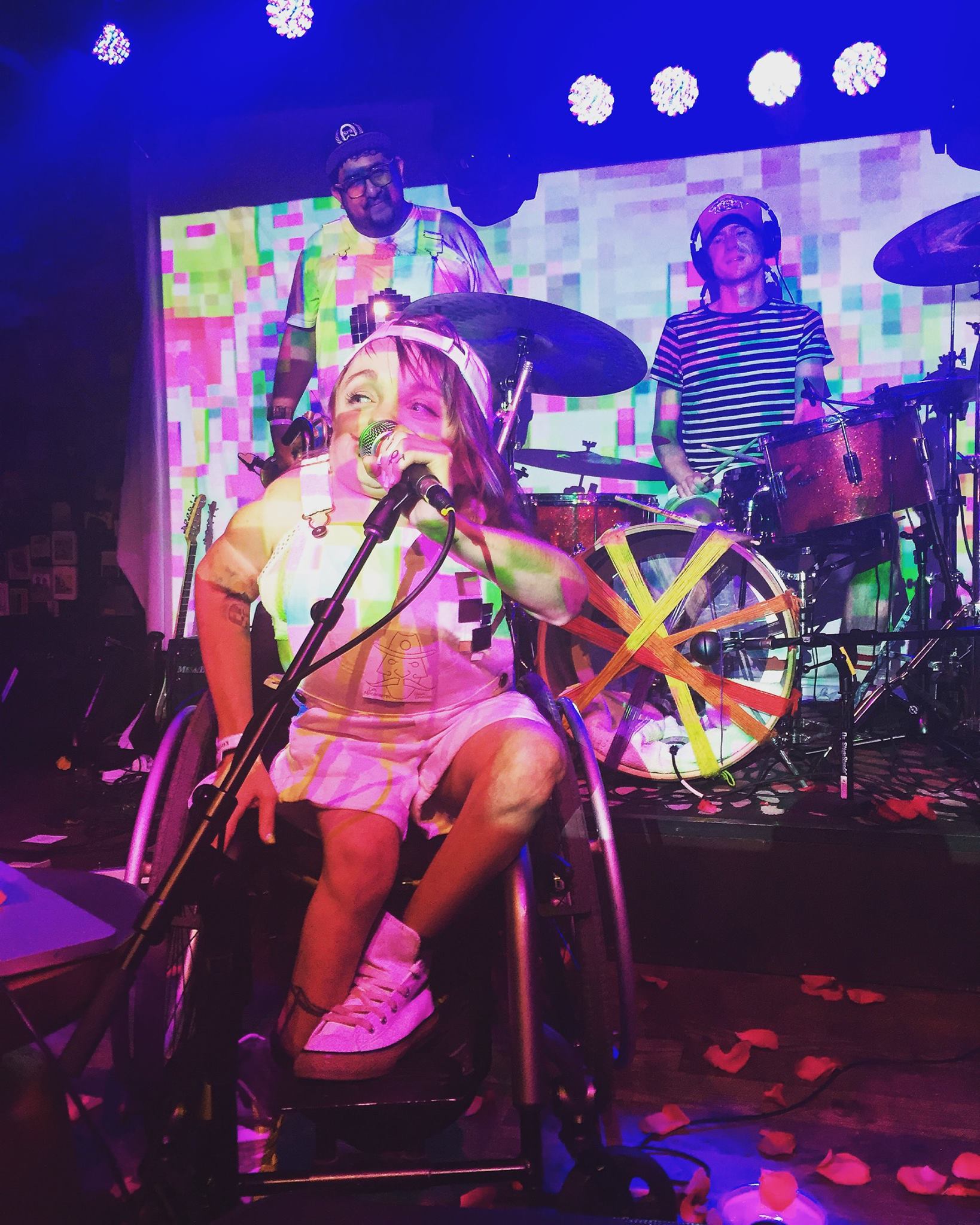 303: What do you miss the most about Denver while you’re on tour?

KH: You know, I’m so Denver all day that touring is really good for me. To get me out of the box… state. Before touring, I put all my eggs in the Denver basket, and it’s so nice to bring Denver with us everywhere we go — because the world is so much bigger than our beautiful city. It’s nice to come home (to play) ‘cuz we’re usually the tightest at the end. I also really love/hate having the Denver conversation with fans all over, because we’re definitely the most popular city right now. Everyone wants to talk to us about moving here and weed and everything the media tells them.

And it’s really our responsibility to break down that conversation and speak about the gentrification we’re facing, the cost of living, the police brutality issue, the real issues that our city faces that tourist blogs and predatory real estate agents don’t discuss when they wanna bribe everyone to move here.

It’s also sometimes shitty to have that conversation every night. Sometimes I just want to enjoy myself and not get into reality. But we have to let people know that our city is so much more than weed and beer and CrossFit. 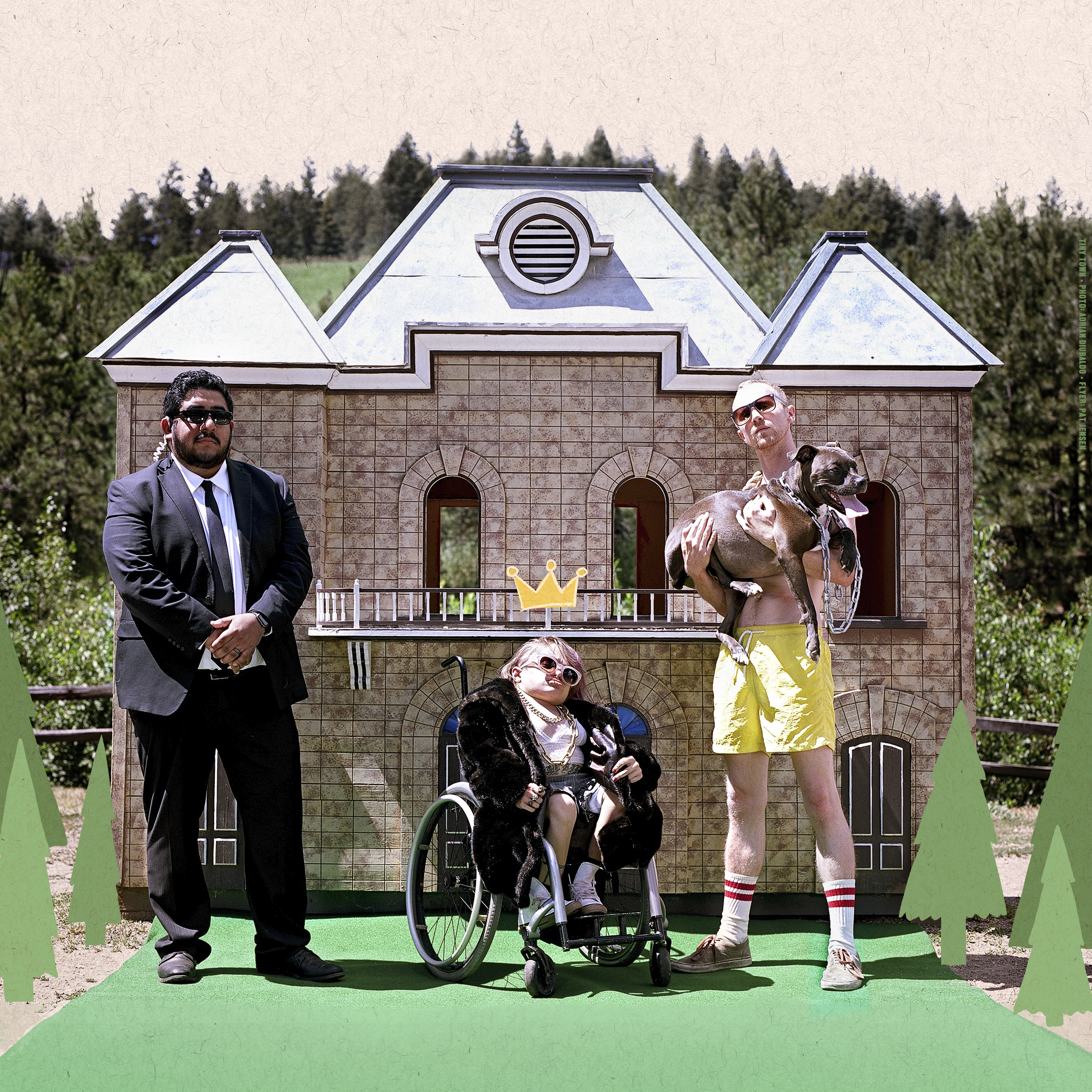 303: What are your favorite local venues to play?

KH: I have to say that I have a really special place in my heart for the Oriental. My family is from the Northside and my dad’s family grew up and went to school within a few blocks from the theater. He still, to this day, tells me stories of causing mayhem from the rooftop as a kid. Not to mention the stage IS WHEELCHAIR ACCESSIBLE, which is very rare. I also love Syntax and go there more than anywhere else in town.

303: Tell me a bit about your new album NO BIG DEAL. What are some of your favorite tracks off the new album to play live and why?

KH: NO BIG DEAL is our first album, which is crazy because we’ve been so lucky to do so much without putting out a full length. Everything up until now has been recorded in my room with no budget and not many live instruments. This is the first time that we’ve spent money to do it right, and we hired the baddest producer in the game. Ikey Owens made this album what it is, and I am so humbled and honored to work with him before he passed away on tour with Jack White. It’s heavy to have been his last full project.

Lyrically, my favorite track is “Take Stairs in Case of Fire.” I was still writing it in the studio and didn’t record my lyrics ’til after everything else was recorded. The track was inspired by a beat, but was really just an improv jam with the band and Ikey insisted we record as it is. I filled in the exact amount of space that they jammed to, which was a weird process for me.

I actually like every song for their own reasons, which is strange ‘cuz I hate everything I create — like every other tortured artist. But I’m super proud of this album and super happy to have all the people in the studio that we did. I kind of assembled a dream team to create this record and I’m proud of it.

Also “Honey Don’t Go” has really been catching me. It’s a beat that I made so long ago, and it’s so dissonant and churchy all in the same song. This is the only track where I really get into the Denver Delusion, so it means a lot to me. (Meaning, the delusion that Denver is all “weed, beer and cheer.” That the city didn’t exist before it was the number-one place to move. That the city wasn’t already full of culture and diversity.)

And the last track is really heavy and gives me chills to think about. “Talk My Way Out,” Ikey created it from scratch completely on the fly in the studio and it’s the first thing I listened to after I heard he passed. It’s a hell of an outro for all of us and is just whoa. 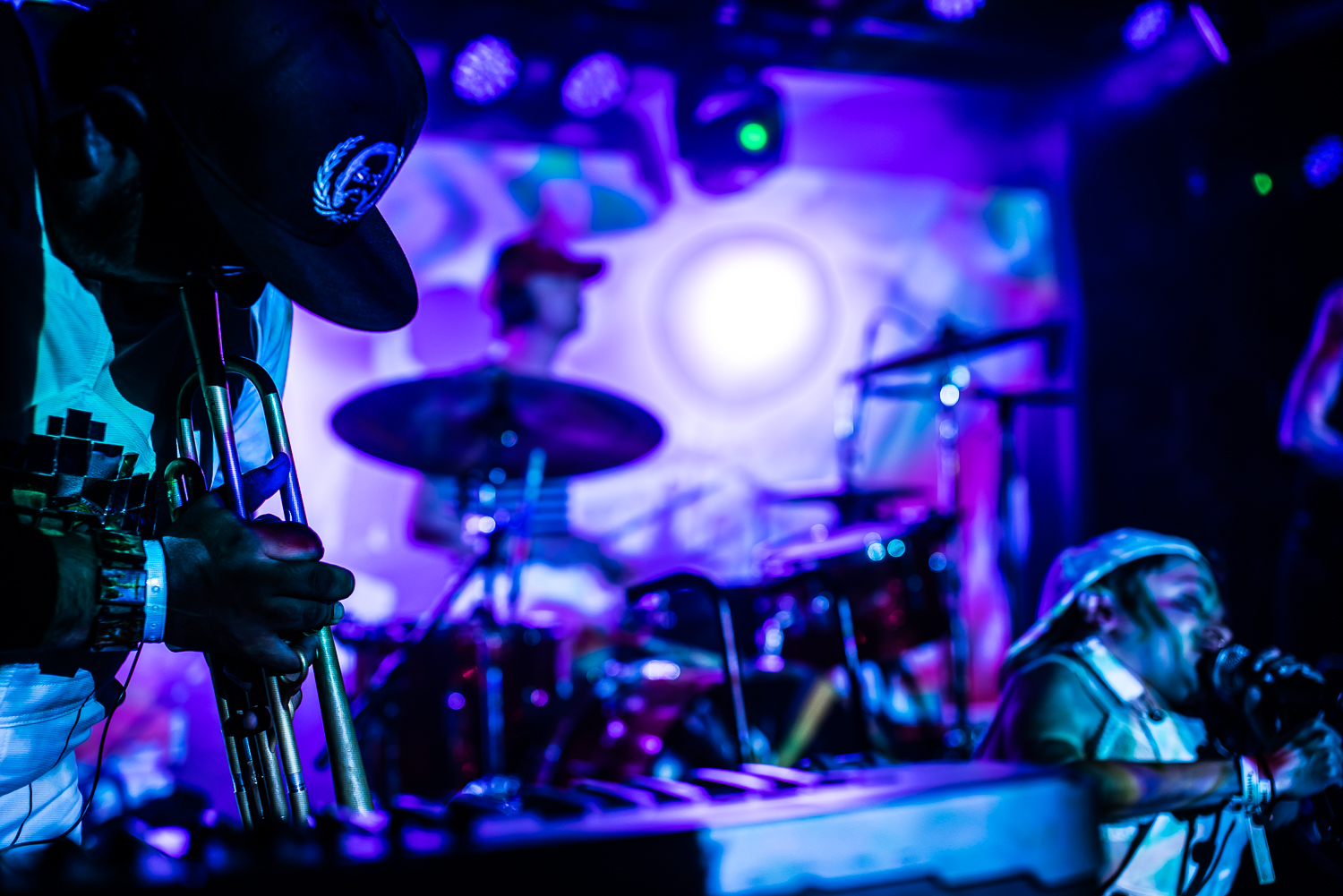 303: And what do you want people to know about Wheelchair Sports Camp’s new album? Final thoughts?

KH: We put a lot of effort into the physical products for this album. Pat Jensen helped us redo all the artwork last minute and our merch table has never looked sexier. The CD folds into this foreclosed house that pops up and is so fucking rad. The cassette tapes come with this Tiny Town ticket that has a digital DL code. The shirts are super soft and something I WOULD WEAR, which is also crazy ‘cuz I swore I would never wear my own band’s merch. We made Tiny Town postcards, which is something I never woulda thought of (credit goes to Gregg, our drummer).

And WOW, I’m just so happy to have this album out into the world. It’s been done for two years, and we’ve been at it hard for about eight years — so it’s long, long overdue. I plan to switch brains from hustle/grind mode and start writing the next one, which I’m even more excited about. I just don’t know how the hell we’re gonna outdo this one… 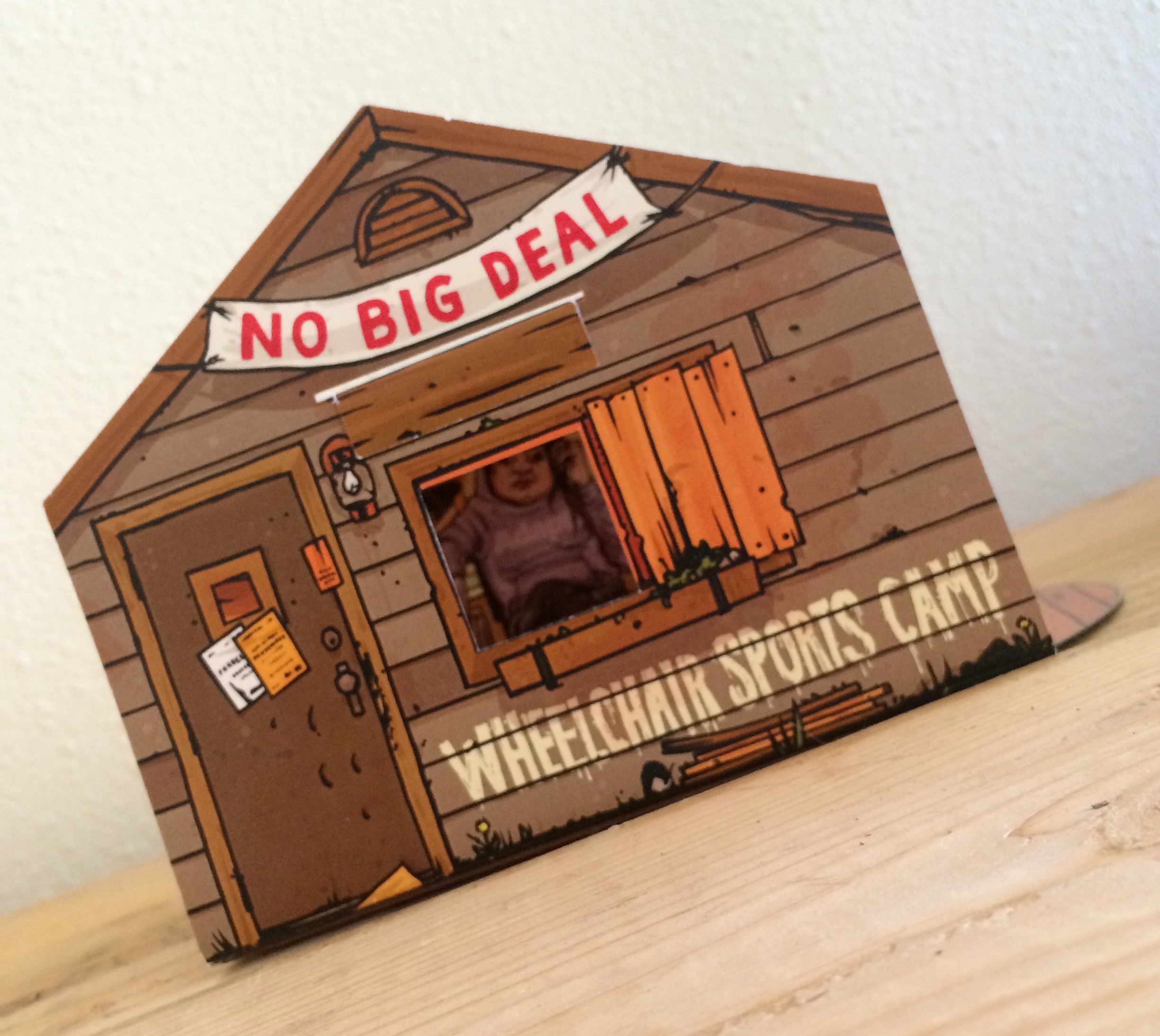