The beauty of writing is in how a simple sequence of words can come together to form an image, an experience or a whole other world entirely. Words that have been written billions upon billions of times over again are infinitely rearranged by writers birthing new pieces of poetry and prose. Each piece of writing that has emerged into life on the page represents a unique voice, a unique experience and gives its readers an opportunity, if only for a moment, to delve into unknown or familiar territory guided by the cadence of the author’s singular voice.

The first annual Lit Crawl Denver, a project of the Litquake Foundation, gave a new forum to Denver’s live, literary experience during Friday, September 2’s prose and poetry-fueled crawl, which took place between the 42nd and 46th blocks of Tennyson Street. The crawl was organized by At the Inkwell, BookBar, Colorado Humanities, FBomb, Lighthouse Writers Workshop, Regis University’s Mile-High MFA and Tethered by Letters, who brought together over 30 of Denver’s unique literary voices in a series of readings at various venues.

Each venue, being unique in its own right, played host to anywhere from four to six accomplished authors who call Colorado home. Authors read portions of their published works to packed audiences who were enthralled by the shared occurrence of words taking on new life through their individual talent. 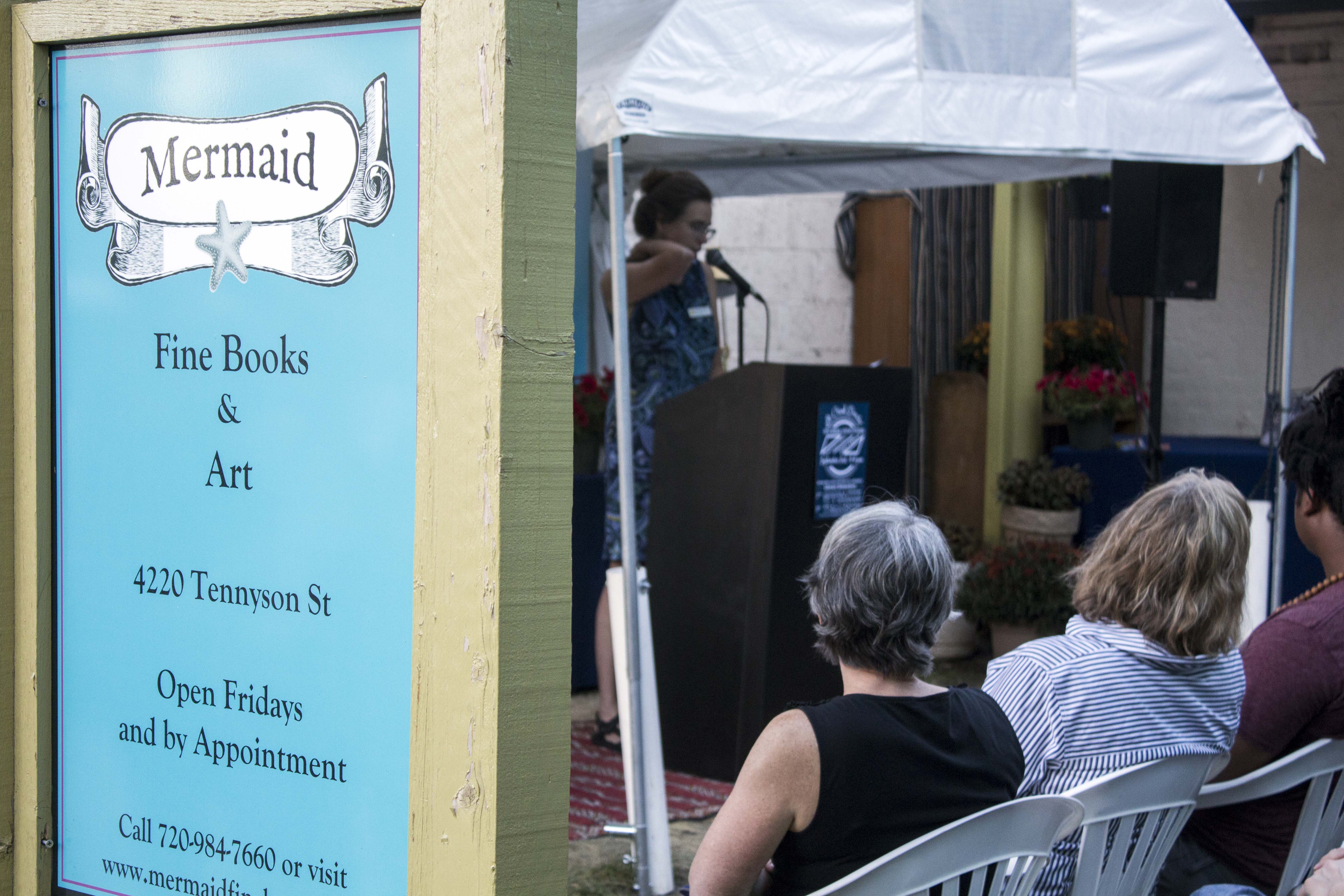 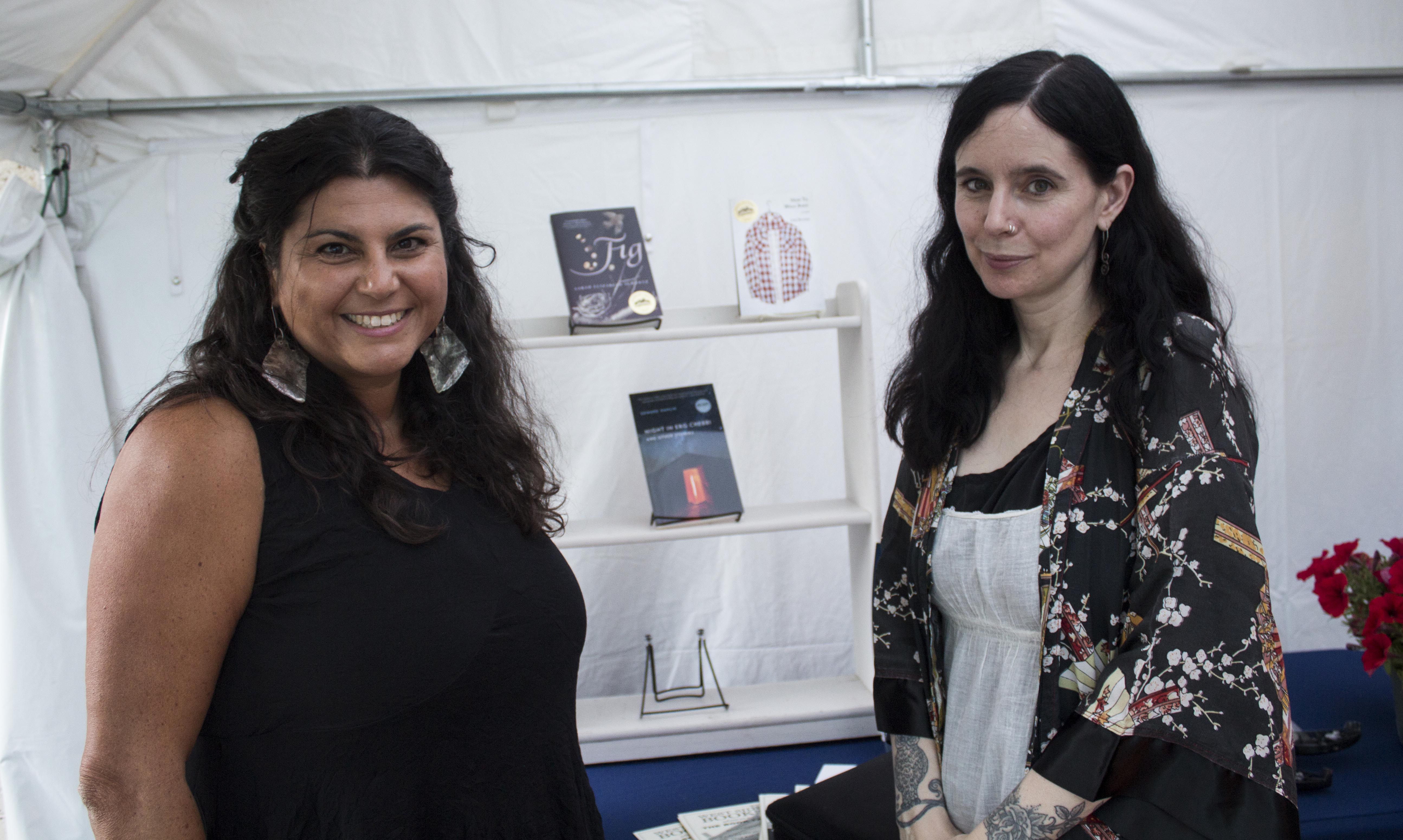 Lisa Birman and Sarah Elizabeth Schantz, after their readings at Mermaid Fine Books.

Lisa Birman, a poet and novelist, who won the Colorado Book Award in Literary Fiction for her first novel, How to Walk Away, read an excerpt from said novel. Originally from Melbourne, Australia, Birman’s accent and fluidly emotive reading style brought her work to life. The audience was engulfed in the character of Otis’ combined post-traumatic stress and obsessive-compulsive disorders, a result of returning from the war in Afghanistan. His story was told through a poetic lens focused on his ritual of reciting the names of those he encountered during the war in order to fall asleep. Among the list of names, Birman crafted descriptive lines that drew in listeners with their vulnerability and truth, leaving the audience wanting to know more.

Other readers included: Edward Hamlin, winner of the 2013 Nelligan Prize for Short Fiction; Sarah Elizabeth Schantz, author of the novel Fig and former Ted Scripps Fellow in environmental journalism from the University of Colorado, Jonathan Waldman. 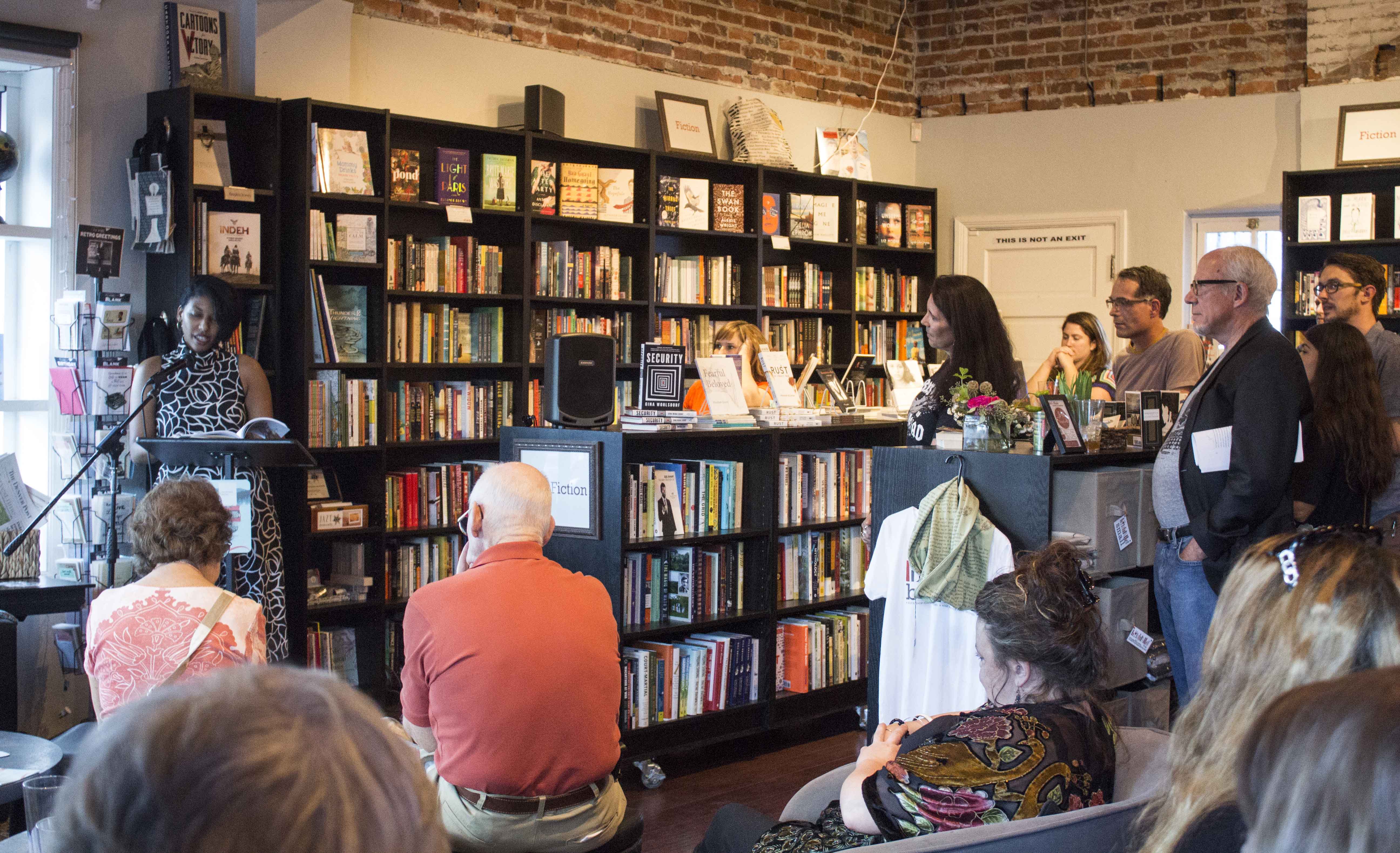 Just a few steps north, BookBar was playing host to another handful of writers. The elegant and comfortable layout of BookBar was filled with crawlers who spilled over into the aisles. Helen Thorpe read from her second book, Soldier Girls: The Battles of Three Women at Home and War, which was named number-one nonfiction book of the year by TIME magazine in 2014. Thorpe began her reading with, “Iraq. Dust. Heat. Unremitting loneliness.” and went on to read about Desma’s experience of being a single mother and a soldier with realistic detail and intricacy only achieved by an author able to immerse herself in the reality of an Indiana woman who joined the National Guard on a dare. 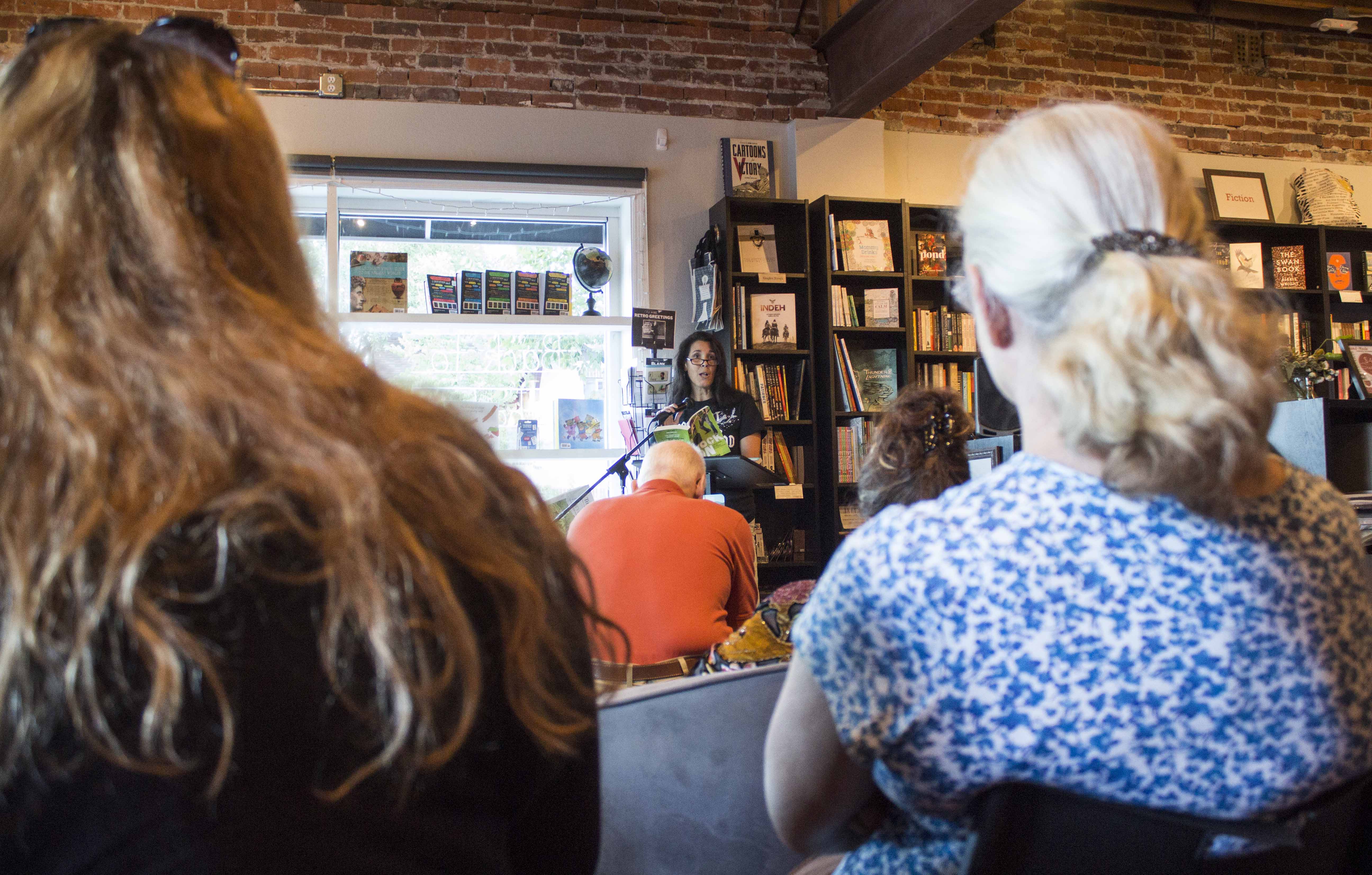 J. Michael Martinez, winner of the Walt Whitman Award from the Academy of American Poets, read two prose poems filled with vibrant, Latino imagery steeped in the language and culture of his ancestors. Denise Vega offered up insights into the world of characters on their path towards adulthood from two of her books, Rock On and Click Here. Khadija Queen, author of four books including her most recent, Fearful Beloved, and Jenny Shank, author of The Ringer, also contributed readings.

The second phase of Lit Crawl Denver took place at Tea for Ewe and Berkeley Untapped. Tea for Ewe combines a knitter’s paradise with a tea shop. Monique Lewis, who helped create the Lit Crawl after being inspired by similar events in New York, and founder of At the Inkwell, hosted the readings at the shop. 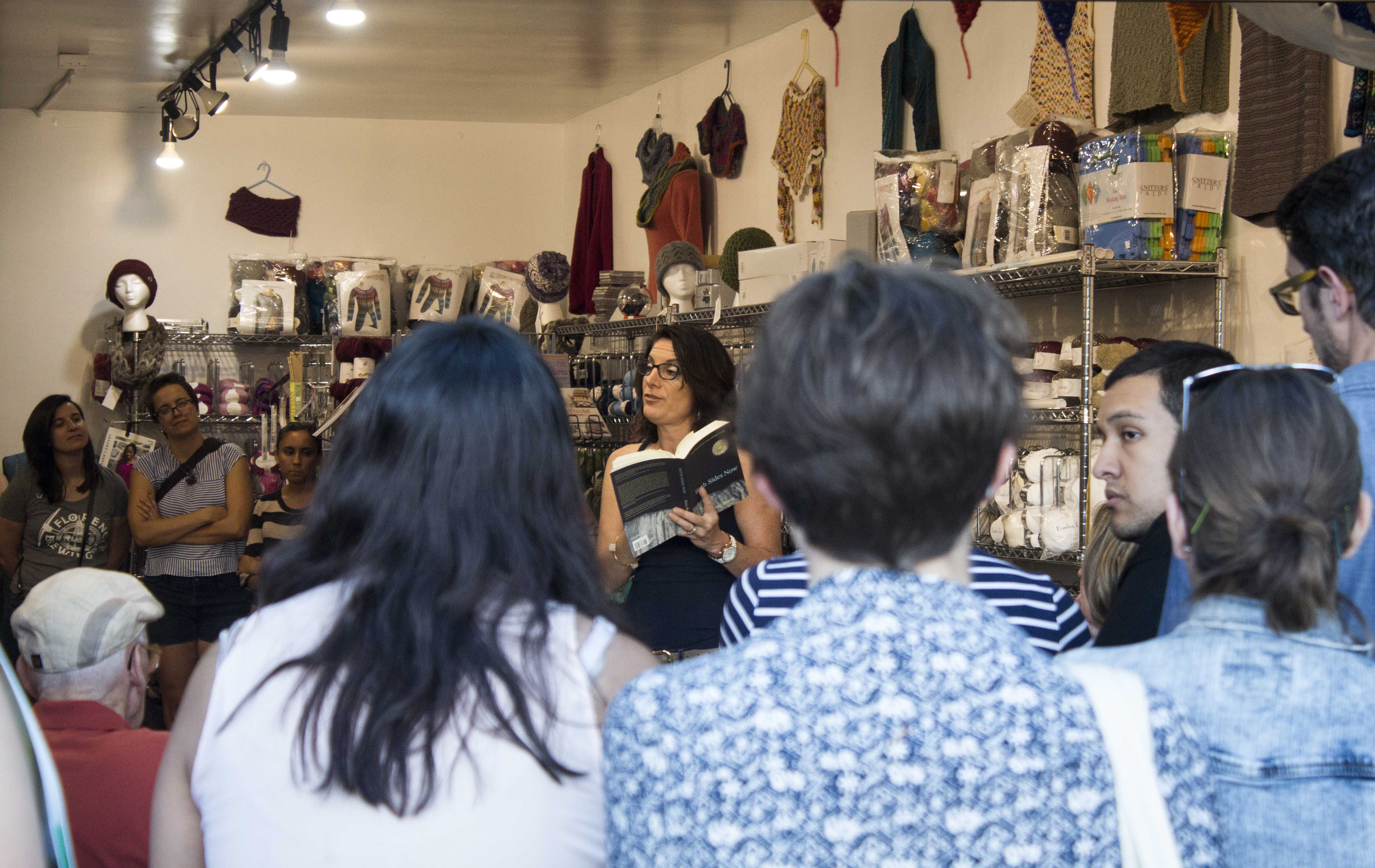 Nancy Sharp, winner of the 2015 Colorado Book Award, read from her novel, Both Sides Now: A True Story of Love, Loss, and Bold Living. Her bold, realistic writing style was wrought with wit and humor as she read of her autobiographical story as a widow and newly single mother transitioning from New York to Denver. 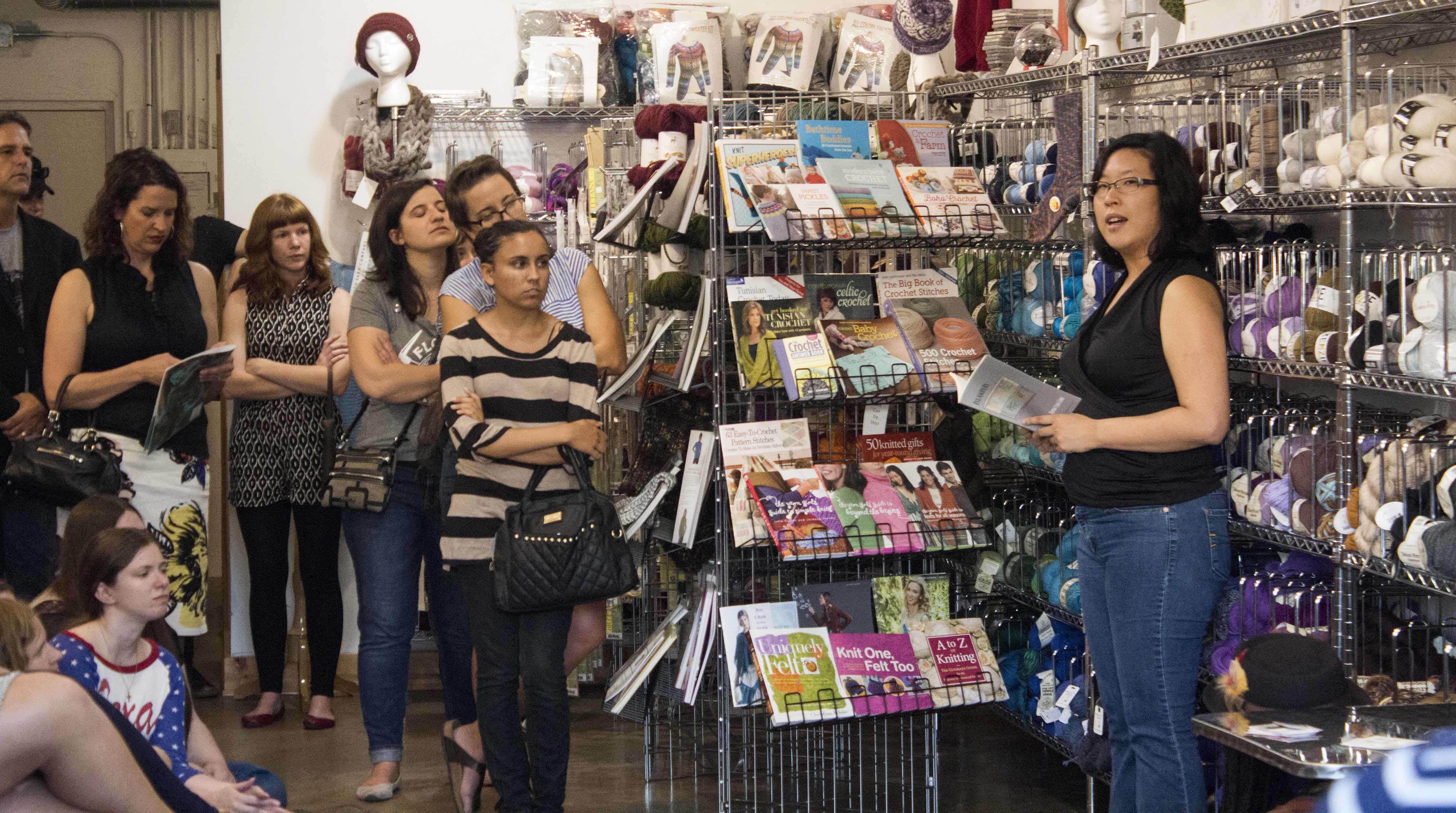 Teow Lim Goh infused the space with original and historical poems about the struggles of Chinese immigrants who came to Angel Island seeking a new life. Lim Goh’s readings from her poetry collection, Islanders, took the audience on a journey along with the immigrants by using raw, honest descriptions. 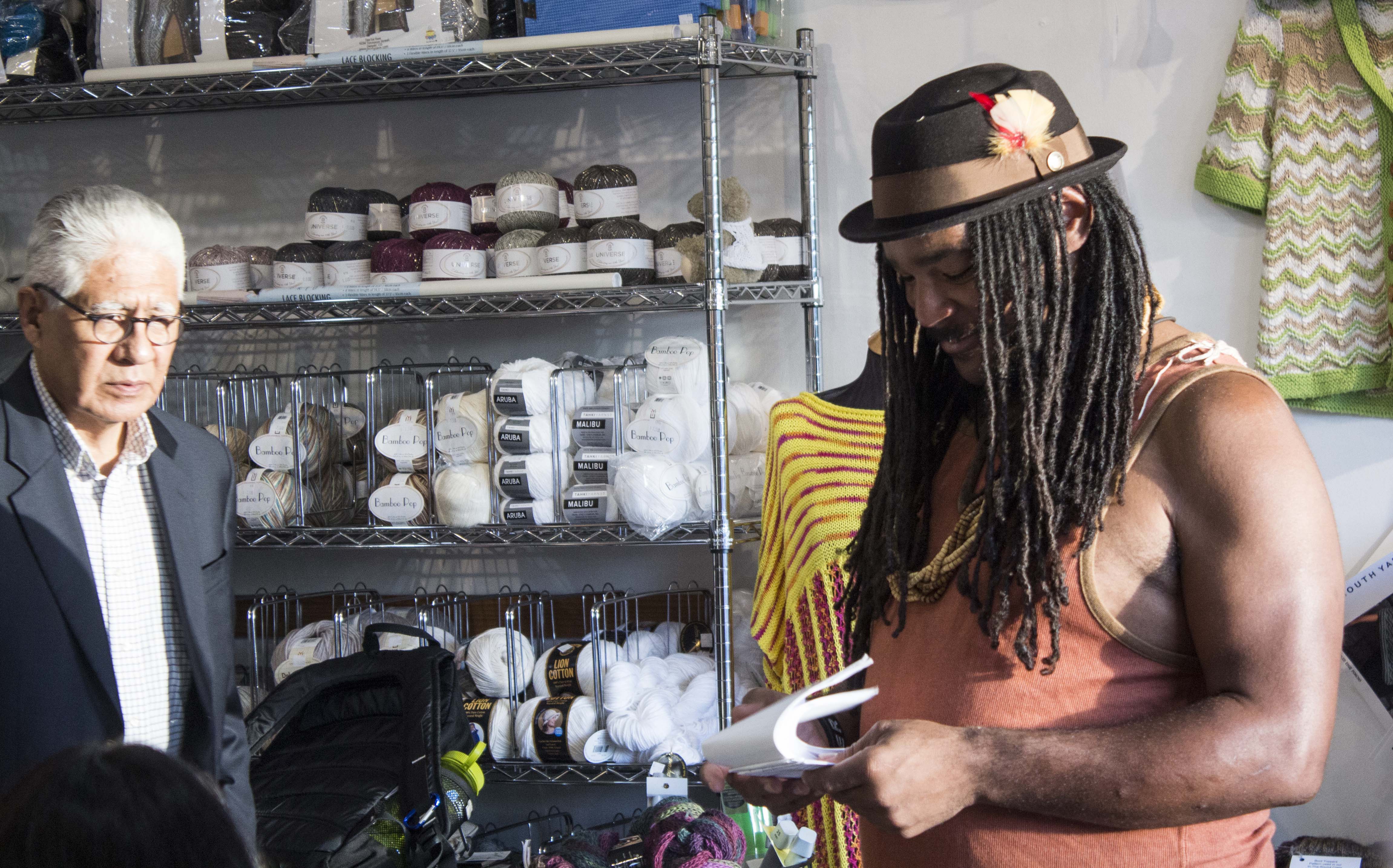 Aurora’s Poet Laureate Jovan Mays brought his signature slam poetry to the crawl. Ever a voice that rises up against racial oppression, Mays wove words and music together to create a space of understanding, empathy and education with his signature ability to engage with every member of the audience. One of his poems, based on Stan and Jan Berenstein, brought chill-inducing descriptions of an artistic and enduring love. 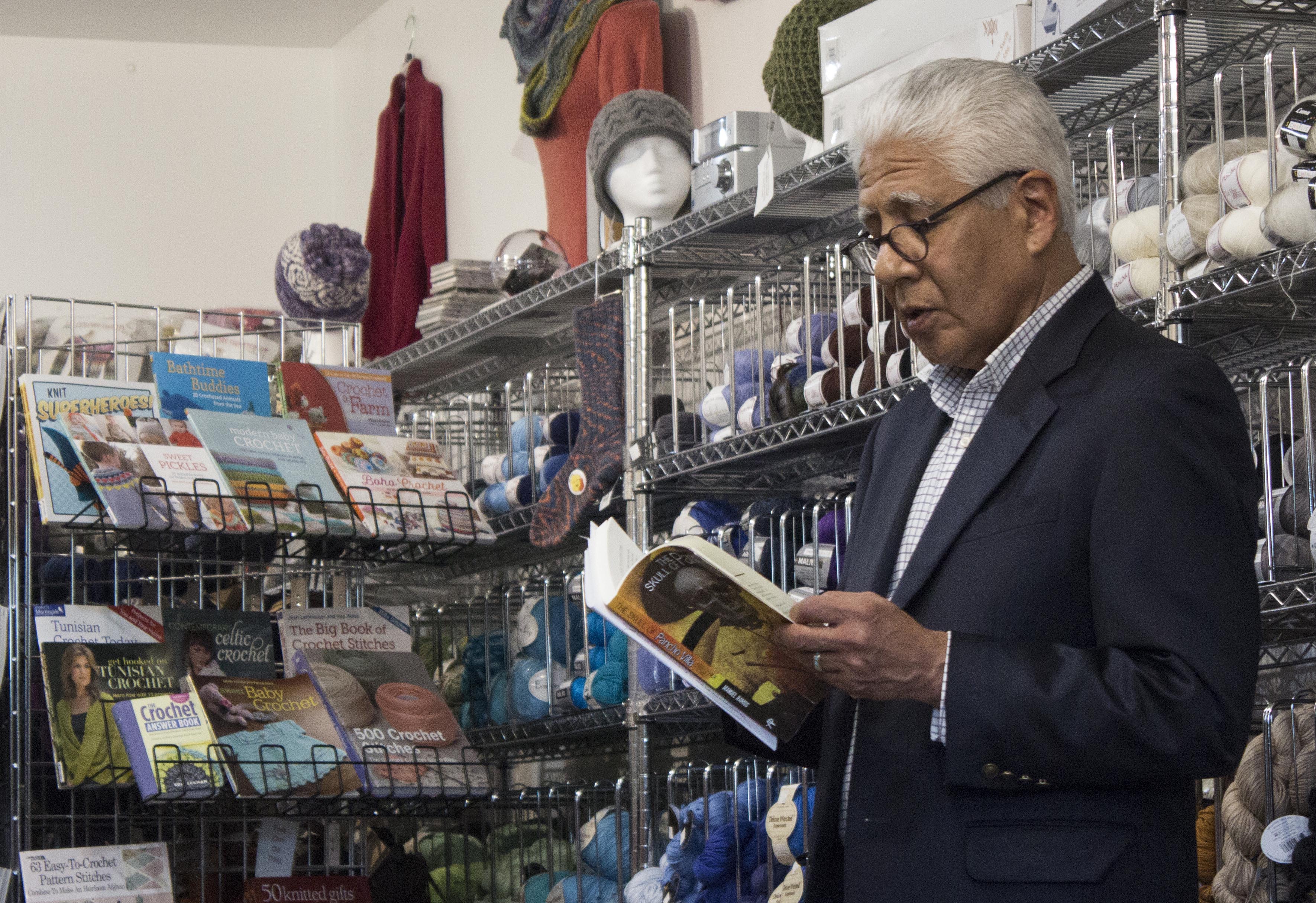 Chicano Noir writer Manuel Ramos reads from his book, The Skull of Pancho Villa and Other Stories.

Author of the Chicano Noir books, Desperado and its soon-to-be-published follow-up, My Bad, Manuel Ramos entertained crawlers with his unique writings of a disbarred lawyer hounded by desperate souls wanting services he no longer felt confident to provide. 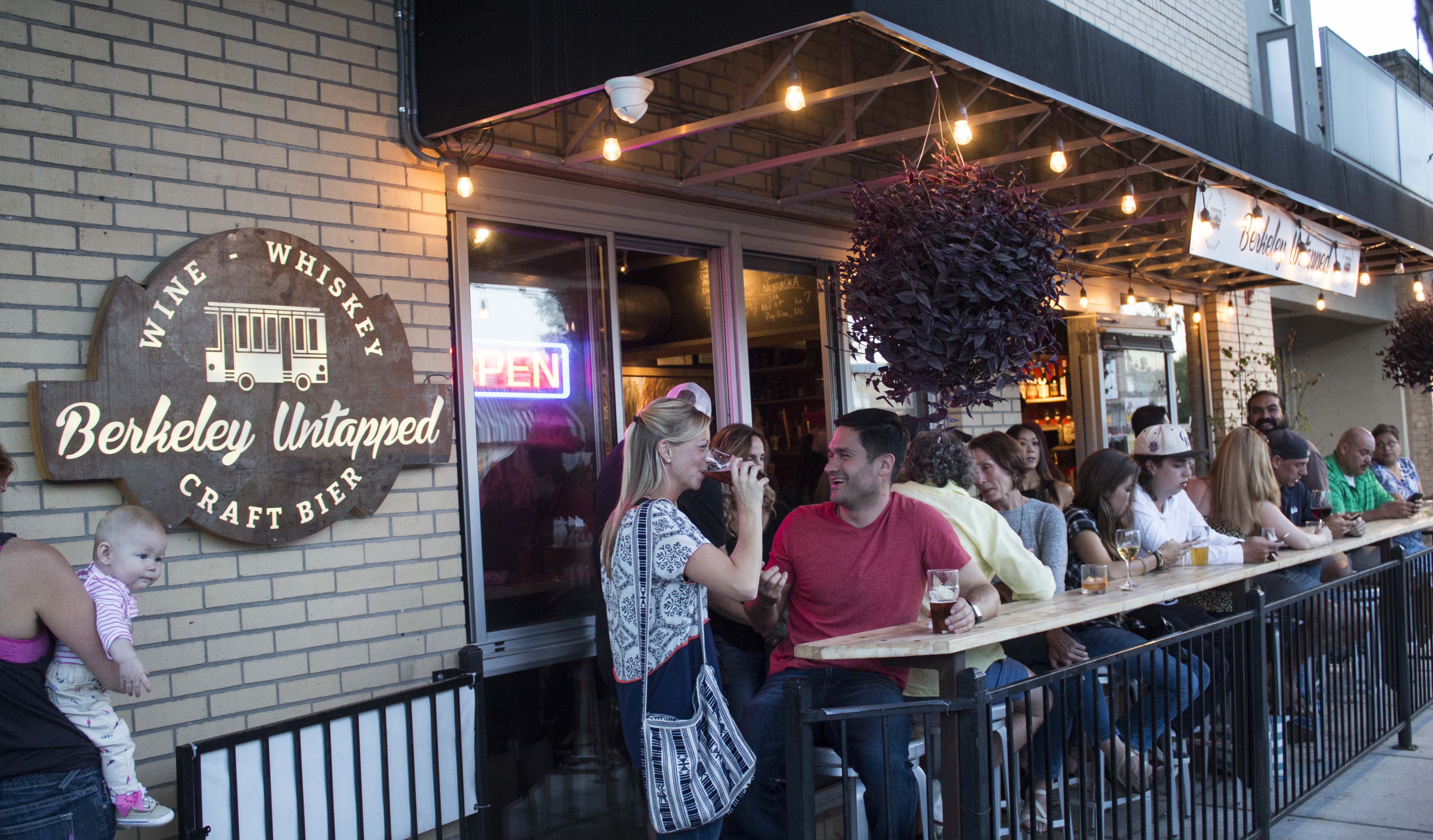 Meanwhile, at Berkeley Untapped, audiences were being regaled with readings from several more authors. Kathy Fish, writer of four short fiction collections, most recently Rift; Richard Froude, winner of the 215 Stanley Kaplan Essay Prize for his writing on hospice patients; Emily Perez, author of the poetry collection House of Sugar, House of Stone; Nate Ragolia writer of the novella There You Feel Free; Gina Wohlsdorf, author of Security and Suzi Q. Smith, who is one of the most well-known performing poets in the country and Executive Director of Poetry Slam, Inc. 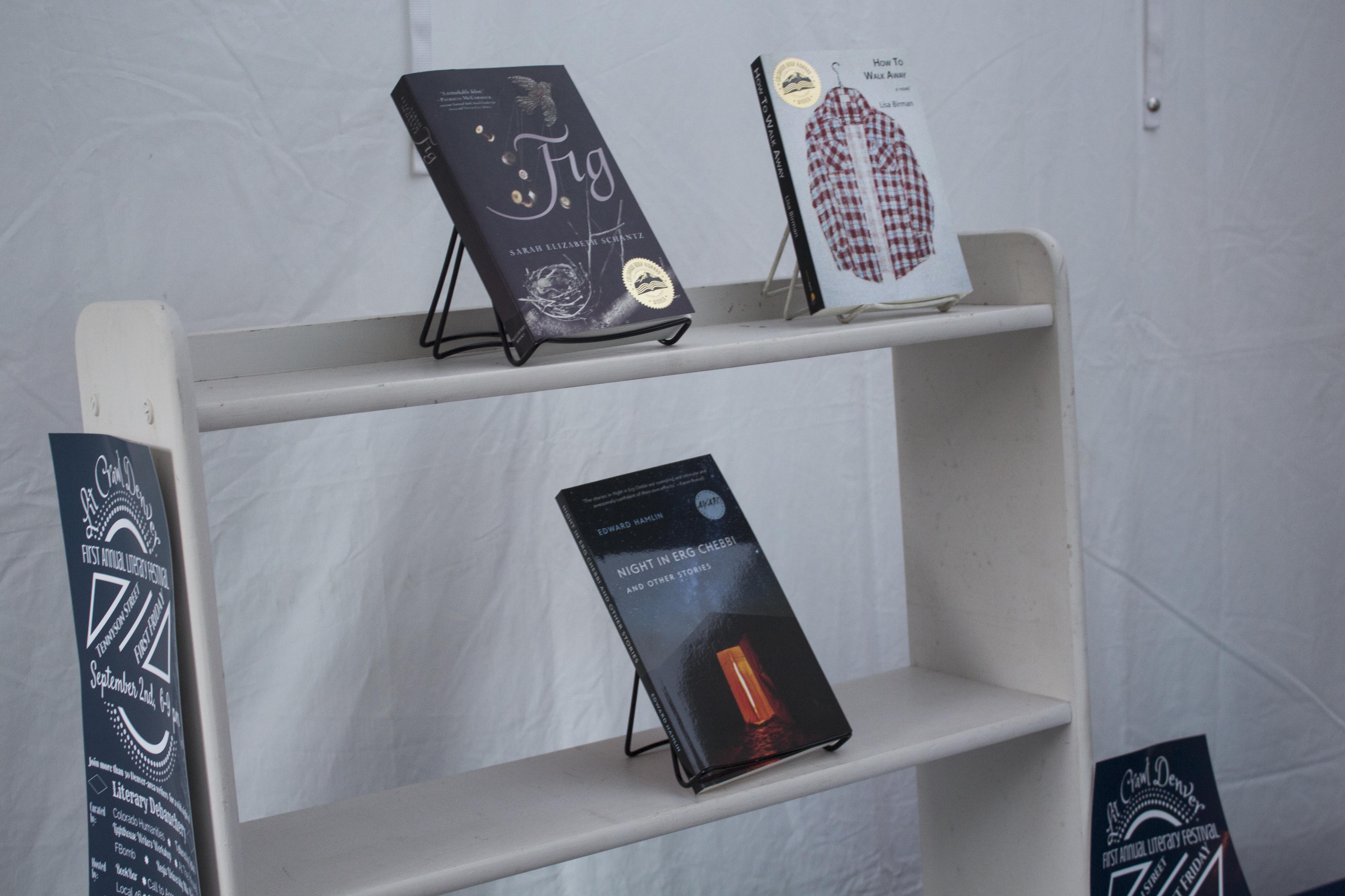 A collection of books by a few of the authors featured at Lit Crawl Denver. 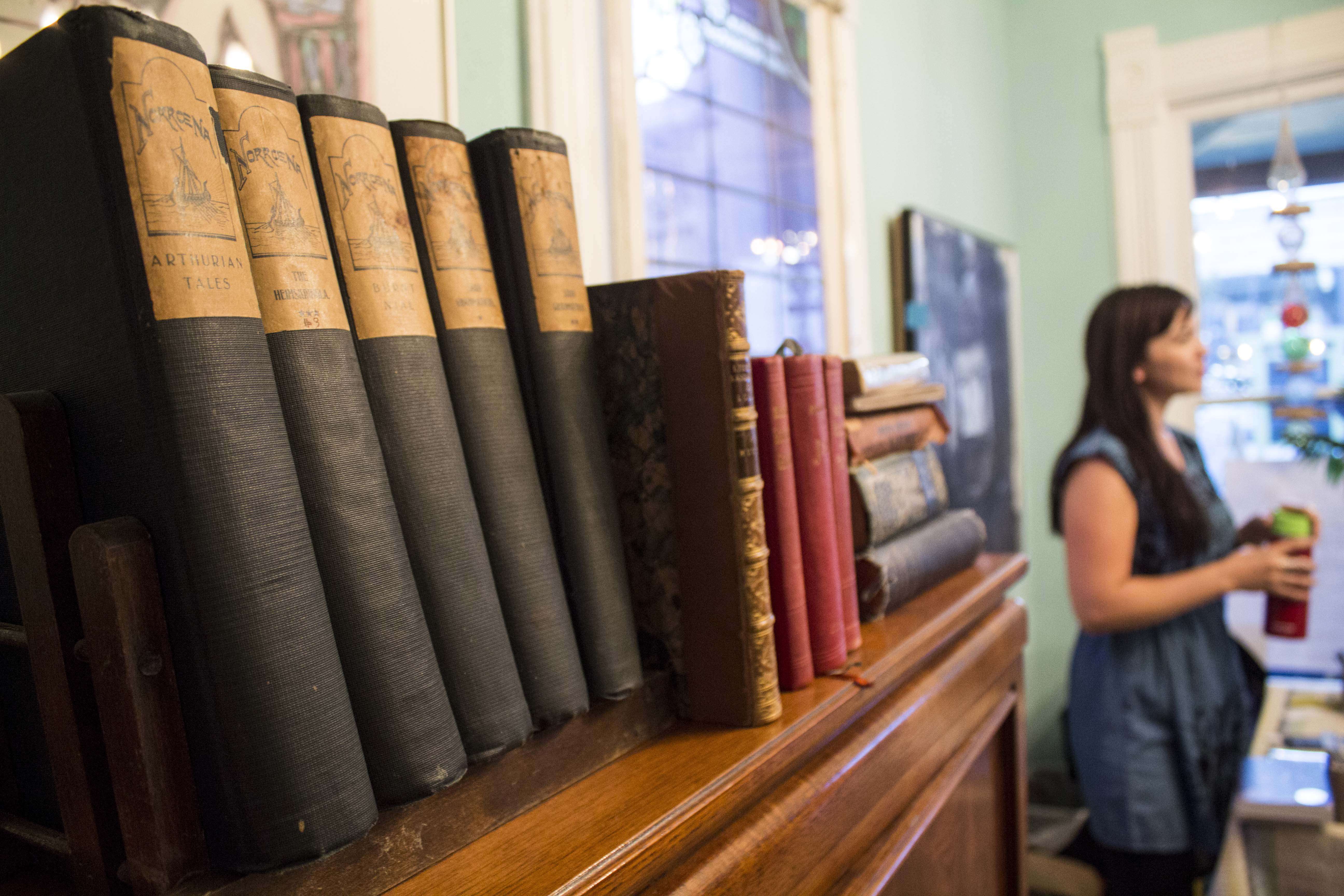 All photos by Kenneth Coles.

Lit Crawl Denver culminated in the entertaining 2nd Annual Fu*%ing Fabulous Fiction Fest after-party at The Oriental Theater. The band High Fiction played their signature music along with readings by authors, interpretive dance and an adult spelling bee as well as other fiction and non-fiction based delights. Overall, Denver looks forward to what literary adventures the 2nd Annual Lit Crawl Denver will bring to our fair city.