For Mat Shumaker, cooking is more than just another job; it’s his life and his passion. You might not notice it at first glance when he’s manning the burners at MiJo inside Avanti, but Shumaker is collecting culinary tattoos one at a time. While his tattoos may be scattered about his arms right now, they are representative of a bigger story. “I’m documenting a path I’ve traveled making me who I am today,” said Shumaker. 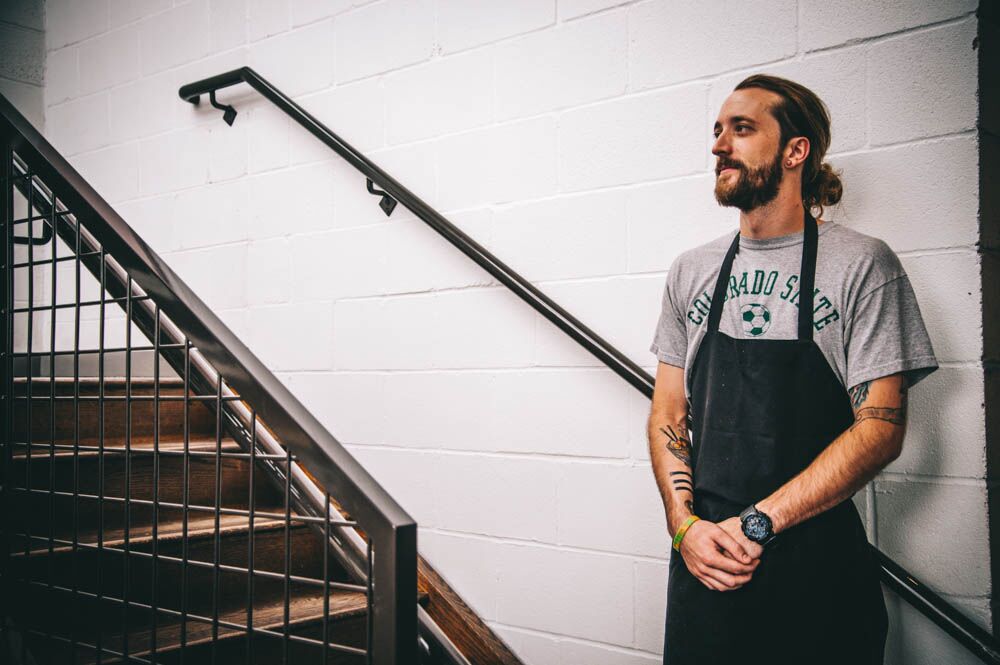 Mat Shumaker of MiJo at Avanti.

His left arm’s tattoos symbolize his past with the loss of his brother and other friends from early on in life, while his right arm’s culinary tattoos show his present and future. One of the first tattoos that Shumaker says caught eyes at the Aspen Food & Wine Classic earlier this year was the everything bagel tattooed on his wrist. “I started with the bagel since I worked at Rosenberg’s Delicatessen, and that place really made me want to have my own restaurant,” explained Shumaker. From there came the colorful udon bowl as a timestamp of what he does at MiJo and hopes to continue doing in the future. 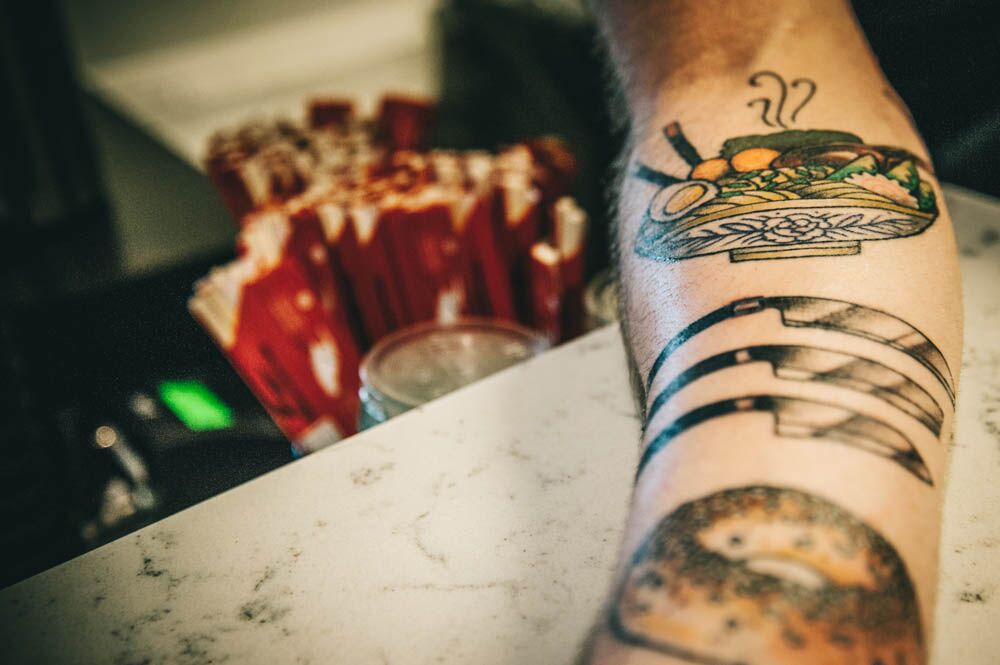 Dedicated to a career in cooking, Shumaker’s tattoos continue to grow beyond just food. His most recent session with tattoo artist Sara Ritchie of Dead Drift Tattoo brought a set of three chef’s knives he bought from MiJo chef and co-owner John DePierro. “The knives really involve my whole cooking career,” Shumaker said. “I’ve had those knives almost the entire time I have been cooking professionally. I bought them from John [DePierro] several years ago, but I use them everyday.”

Much like his culinary career path, Shumaker’s tattoos are coming together step by step. “We decided to do all of the tattoos a little bit at a time, building as we go to let her work at her pace,” he said. “And because I’m fond of when tattoos look collage-style, where each piece is done separately but all towards the whole picture.” 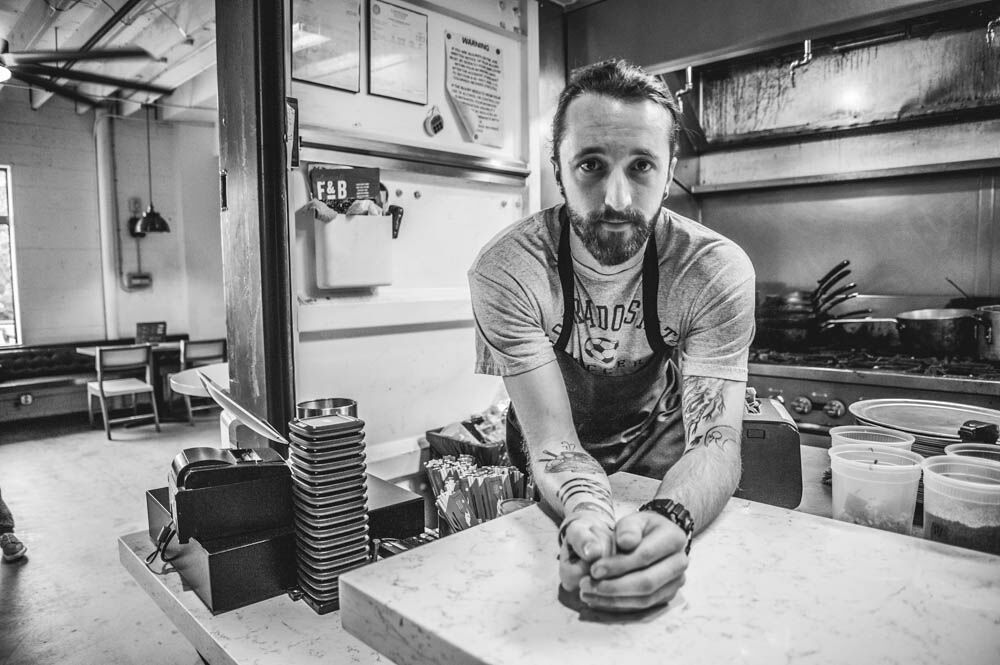 Shumaker plans to add in other culinary tools and favorite foods as time progresses, but his next tattoo will represent his ongoing journey through life and achieving goals in the restaurant industry. “In a couple weeks, I will be adding some mountains to signify the uphill battle of working to get my own restaurant and the wind to signify passion I have for what I do.”

All Photos by Lucy Beaugard. 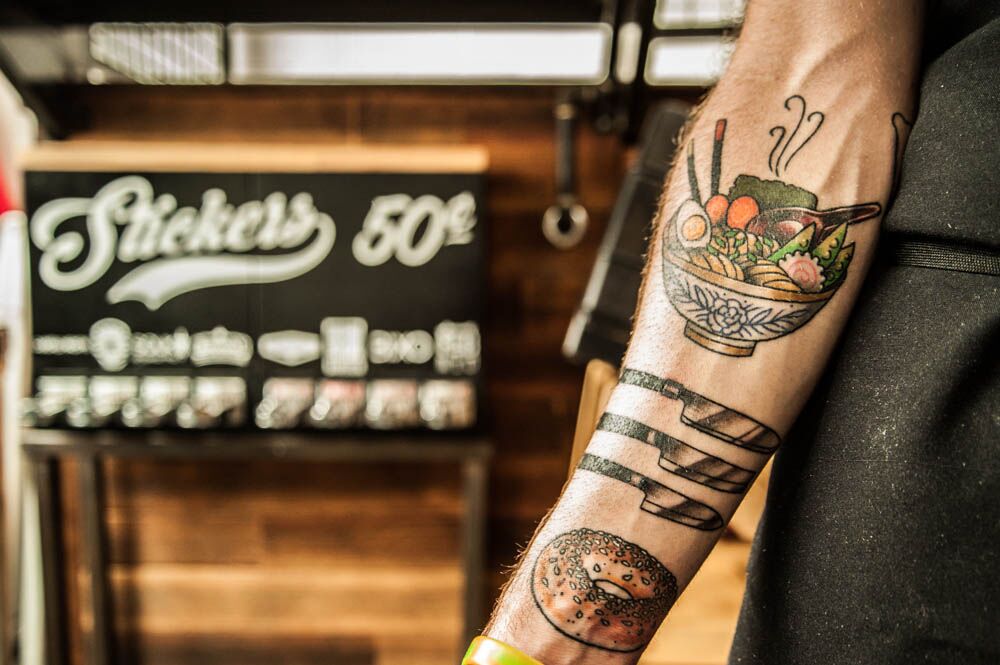