Atmosphere Brings the Twin Cities to The Rocks

On Friday night, Atmosphere brought some of Twin City’s best to the Rocks, coming back to our beautiful venue for the third straight consecutive year. Openers for this year’s show included Minnesota legends Lizzo and Lifter Puller. Fellow Rhymesayers artist Brother Ali took the stage as a final warm-up before Slug and Ant of Atmosphere. Over 20 years of making music and the duo still isn’t done. This tour is celebrating their latest record, Fishing Blues, released on August 12, 2016. Beautiful weather, a fantastic venue and some great hip-hop – it doesn’t get much better than that. 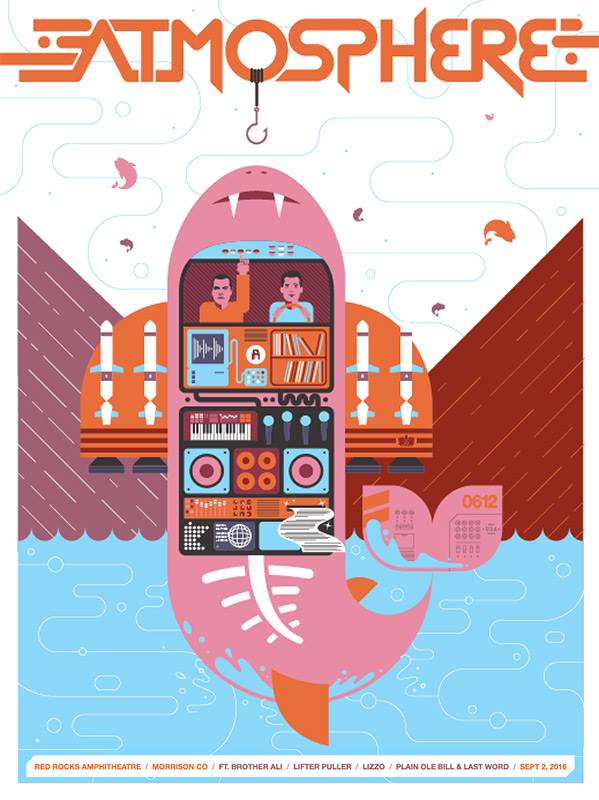 Lizzo was out first, elegantly strutting across the stage for an empowering opening performance. The Minneapolis-based singer cascaded her beautiful voice across the rocks for a wonderful 45-minute set. Afterwards, she thanked the crowd for supporting “a big sexy black women like herself,” giving a great reminder to everyone that we all need to love ourselves a little bit more.

The following artist was definitely a change in sound for an Atmosphere concert, but a continuing theme in the Twin City artists. The alternative rock band Lifter Puller were next out to the stage, a rare reunion for the band who has only done a handful of shows since their breakup in the summer of 2000.  The fast-paced rhythms kept the crowd bouncing and the interesting song subjects kept listeners riveted. While the response wasn’t amazing from the fans in the crowd, many of them still respected the artistry on stage, despite their obvious bias towards the hip-hop sounds of the night.  Giving a huge thanks to Atmosphere for allowing them the opportunity, the band blazed through an entertaining set and made the most of the once-in-a-lifetime chance at a sold out Red Rocks show.

After a short intermission as the band’s equipment got broken down, Brother Ali hit the stage to a roaring cheer of appreciation. The sold-out venue was jam-packed with people, completely filling the entire amphitheater and even forcing some to the sides of the rows. Ali played through the hits and even made an exciting announcement about new music that is coming soon, something everyone has missed since his last full-length release was back in 2012. Highlights from the set included some of his classics like “Uncle Sam Goddamn,” “Mourning in America” and “Good Lord.” After a powerful verse about black empowerment and social injustice, Ali dropped “Namesake,” a perfect top-off for the sentimental message. The set was well-executed and the crowd was clearly thankful for the opening tunes from Brother Ali, the only other hip-hop act on the bill.

The time everyone was waiting for had finally come, and Slug and Ant graciously stepped onto the stage to a sea of admiring supporters. To get the night started the duo dropped “Like a Fire,” the intro to their latest album.  The night was filled with an equal of mix of both older and newer tracks, nearly every one of which was instantly recognized and applauded by the crowd.  Some of the classics of the night included “God’s Bathroom Floor,” “Happy Mess” and “Yesterday” — all sending fans deep down memory lane. Dropping Atmosphere’s 2010 hit “Best Day,” Slug asked the crowd “Are you gonna have the best day ever with me?” Digging back even deeper in the discography, Slug commanded the crowd to please put a middle finger to the sky and sing along to the “Fucks in the chorus”  as he dropped the classic track “Fuck You Lucy.” The new album wasn’t forgotten, either. Slug carried his perfect delivery over to play some of the best track off of “Fishing Blues” as well. “Pure Evil,” Perfect” and “Seismic Wave” all got a chance for their special moment on the rocks, topping off a killer set that was still full of surprises. 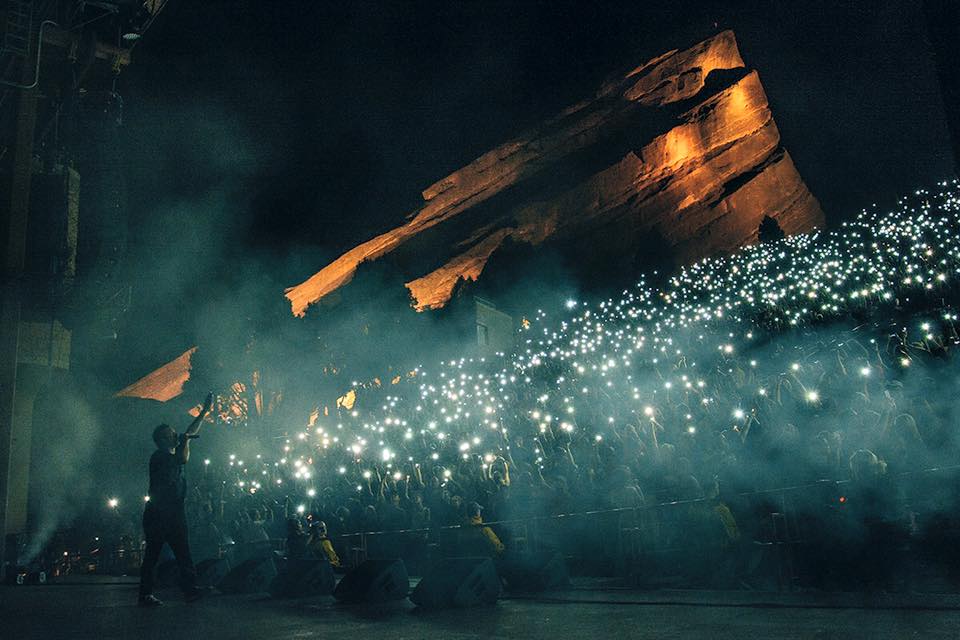 Fans weren’t fooled as Atmosphere appeared to leave the stage, only to return back shortly, saying “We forgot to do a song, can you guess which one?” The fans knew which ones were forgotten and instantly called out screams of “Sunshine” just before it blared through the speakers. The show couldn’t be complete without the final goodbye to the talented Twin Cities native known as Eyedea. Denver was lucky enough to experience a premiere event for the brand new documentary released about his life, with both Atmosphere and brother Ali in attendance at Red Rocks. Before they left the Rocks they had got everyone’s flashlight out for “Flicker,” Atmosphere’s touching tribute song and powerful ode to their friend Eyedea. This was the perfect way to cap off a very important weekend for the entire music scene in Minneapolis, a weekend they choose to spend in our beautiful home state of Colorado.