Go Now – From Sea to Sky at Robischon Gallery

It is a special treat when a gallery can thread together five solo exhibitions seamlessly into a singular theme experienced. Robischon Gallery has succeeded in doing this with art from Colorado artists Ian Fisher, Gary Emrich and Kevin O’Connell and out–of–towners, William Lamson and Brandon Bultman. Together their art encompasses a theme of balance—of finding equilibrium—in a world that seems out of whack. The subject matter ranges from sea to sky—literally with the cloudscapes of Fisher and the photographs of water by O’Connell—and figuratively with the complex issues addressed by Emrich, Lamson and Bultman. The human condition is a key part of each of these artists’ works in that they all have a yearning to shed light on how our perceptions are influenced by our surroundings.

Each solo exhibition relates to the next in a fluid way, allowing the viewer to walk through the gallery experiencing an evolution on the theme. And though the theme—a quest for equilibrium—is wide–reaching, each artist represents a contemporary perspective, giving the viewer an idea of what finding balance is in modern terms. As the gallery guide states, “the dynamic visual vocabularies of the five artists signal a sense of change in the world where the climate of culture parallels the nature of all things.”

You can see this collection of artists in the downtown Denver gallery until August 27 and you absolutely should not miss it. For more information visit their website.

In Advance of Light 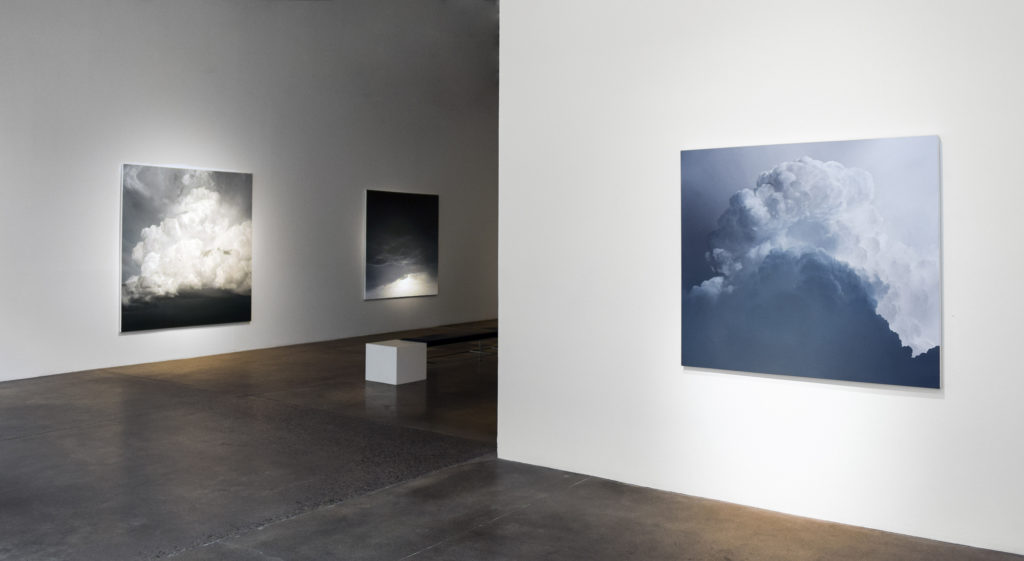 Fisher’s large-scale cloudscapes are an undeniably pleasing aesthetic, the subject matter being universally recognized no matter where you come from. This series specifically focuses on stormy clouds. The paintings are mostly in hues of grays—building up with life-giving water. Anxiety and relief combine in these gorgeous pieces, where Fisher aims to emphasize that light always comes after darkness—not only because of the title of his exhibition but also because of the peaking rays of sun that appear behind or within the tumultuous clouds. Personal experience enriches these cloudscapes, giving the viewer an opportunity to remember a time when similar clouds moved into their horizons. Most remarkably, these paintings give the illusion of movement. Perhaps it is partly due to the large scale—the largest measuring 84 inches by 78 inches—but the layering of brushstrokes and obvious attention to detail on Fisher’s part have resulted in 2–D art that appears animated, painted clouds that roll and build and carry momentum. While you view these paintings, expect to see some people outside peering in at them as well—it seems like everyone finds these fascinating.

“In The Roaring Garden (Rotation)” 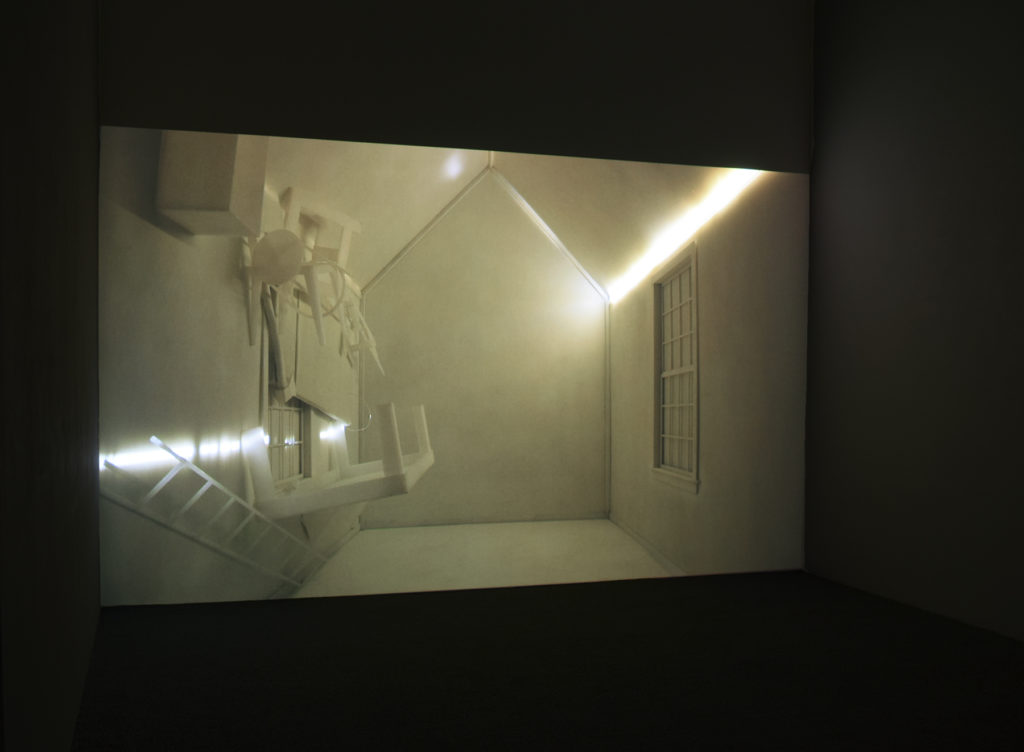 This exploratory video, 8:39 minutes in length, comes as a second in a series where the images on the screen come from a camera obscura, illuminating a small space in a variety of angles and rotations. The first video, In the Roaring Garden, captured Thoreau’s romanticized view of the pond at Walden—images of sunlight, trees, sounds of water and birds— through the interior of a one-cabin room. This video, in contrast, only focuses inside the model—a windowless space where urban noises penetrate easily—and where the point of view is turned end over end. The entire set of the movie was filmed in a “rotating armature floated upon a raft on the Hutchinson River in the Bronx, New York.” It would not be surprising if you find yourself nauseated after watching the rotating room, and more–so, questioning what exactly Lamson intends to reveal. 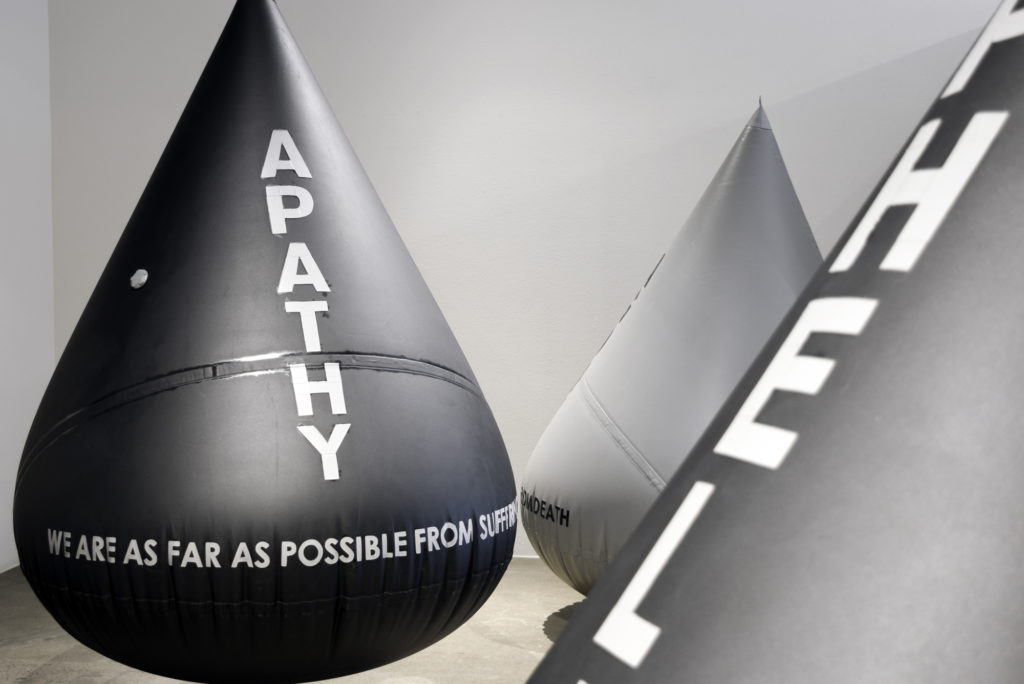 These four sculptures are actual water buoys that Bultman designed and originally installed as directional sailboat race lane-makers. The bulbous sculptures occupy an entire room of the gallery with a weightlessness. But contrary to their size and presence, they must be maneuvered around with consideration. At first, this exhibition may seem playful and interactive, but as you inspect and contemplate the meaning of his words and the orientation of each buoy (one lifted from the ground) you begin to think beyond the confines of the small gallery room and into the abyss of the very meaning of life. Bultman’s inspiration and research for this series came from author Eugene Thacker’s assertions from In the Dust of This Planet, where three ways of interpreting the world are examined: 1.) the world–for–us, 2.) the world–in–itself and 3.) the world without us.  By using certain words— Aphelion, Apogee, Apathy and Mortal Agony—Bultman tethers some very philosophically deep ideas to descriptive terms that are technically out of this world. In doing so, this series allows the viewer to face the very source of our most intense fear, the unknown. 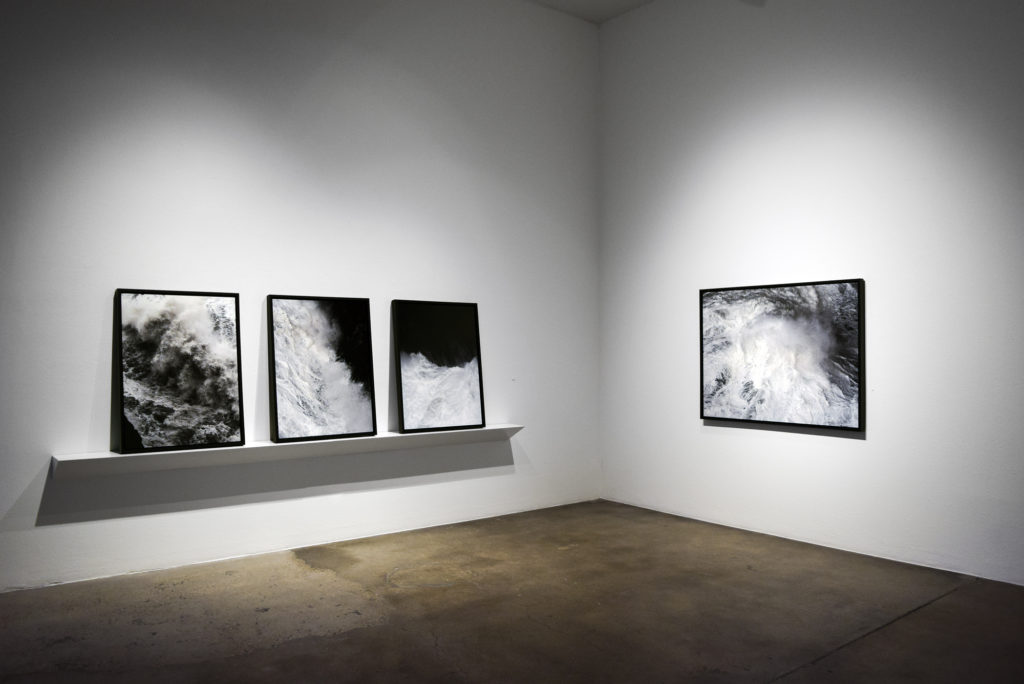 As one of the Colorado artists, O’Connell is known for his expansive Western landscape photographs which focus on a strong and central horizon line. The Inundation series diverges from the previous themes of his work for two reasons—the subject is water and there is not an immediately apparent horizon line. But what remains similar in O’Connell’s work is his ability to capture strong emotions using natural landscapes, and in this case, the images of the tempestuous waters inspire a feeling of surrender. Instead of a central horizon line, each photograph focuses on a point of chaos surrounded by calmer waters, allowing the viewer’s gaze to wander throughout the image as it wishes. Along with the photographs O’Connell created a six-minute abstract video with sounds that you would hear by the water and underwater. The passing images and listening to the gurgles and bubbles creates a sensation of swimming or drowning. O’Connell accompanied this exhibition with a poetic text he wrote himself, the first line of it being, “I dreamt of the ocean. There was no gentleness—only ferocity.” No matter your personal feelings about water or the ocean, these photographs—which appear like paintings very close up—will demand a visceral reaction from you. 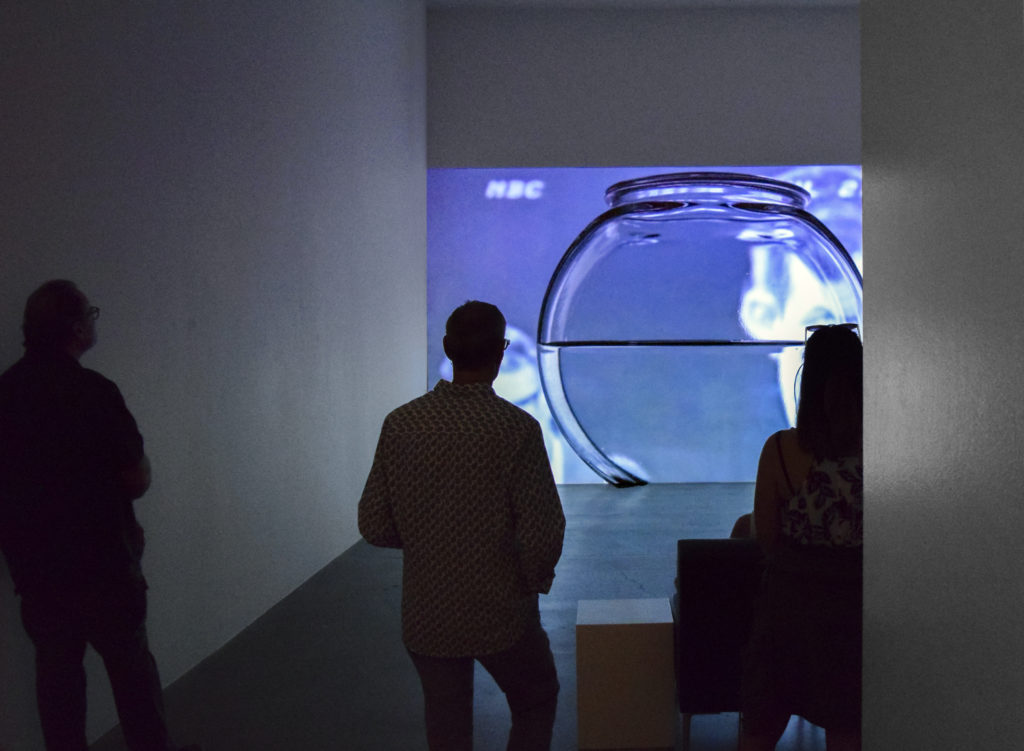 This video, 12:15 minutes in length, is the second installment in a trilogy called “Apollo” where Emrich focuses on July 18, 1969, a day in American history with two juxtaposing events—the midpoint of our first journey to the moon and the unexpected and fatal car accident of Edward Kennedy. His interest with these two events is found in the “unpredictable rewards and consequences,” where a 238,000-mile journey ended safely but a four-mile journey ended in tragedy on the same day.  With a series of images and animations relating to these two events accompanied by an instrumental soundtrack, Emrich creates metaphors that make us marvel at the trajectory of life events, at the unexplainable mystery of actions and reactions, and more importantly he makes us question whether we understand the nature of risk.

Robischon Gallery is located at 1740 Wazee Street. The exhibit runs until August 27.