Rocky Mountain College of Art and Design, or RMCAD, is an integral part of the Denver art scene. By showcasing local artists and building a community for sculptors, painters, and designers, RMCAD is helping locals break their way into the art world. In Jon Geiger’s case, RMCAD is helping a Colorado native return to his roots with his new light sculpture. Geiger has installed a piece for the Black Cube Museum, a nonprofit, nomadic contemporary art museum. Black Cube works without traditional boundaries of a physical building, experienced primarily through pop-up art exhibitions and shops conceived by our artist fellows.

Geiger, who studied at the University of Colorado Boulder has returned from his new home of Detroit to install a tumbling light sculpture, referenced directly from the iconography of the west. The staggering, 26-foot sculpture is an abstracted, animated, white neon tumbleweed which consists of five structures. Each tumbleweed is illuminated individually to create a rolling movement of light. The exhibition opened to the public on August 20, and will continue through October 17. We had the opportunity to sit down and chat with Geiger before his return to Detroit and wanted to learn more about this mesmerizing project, the Black Cube Museum, and his connections to Colorado. 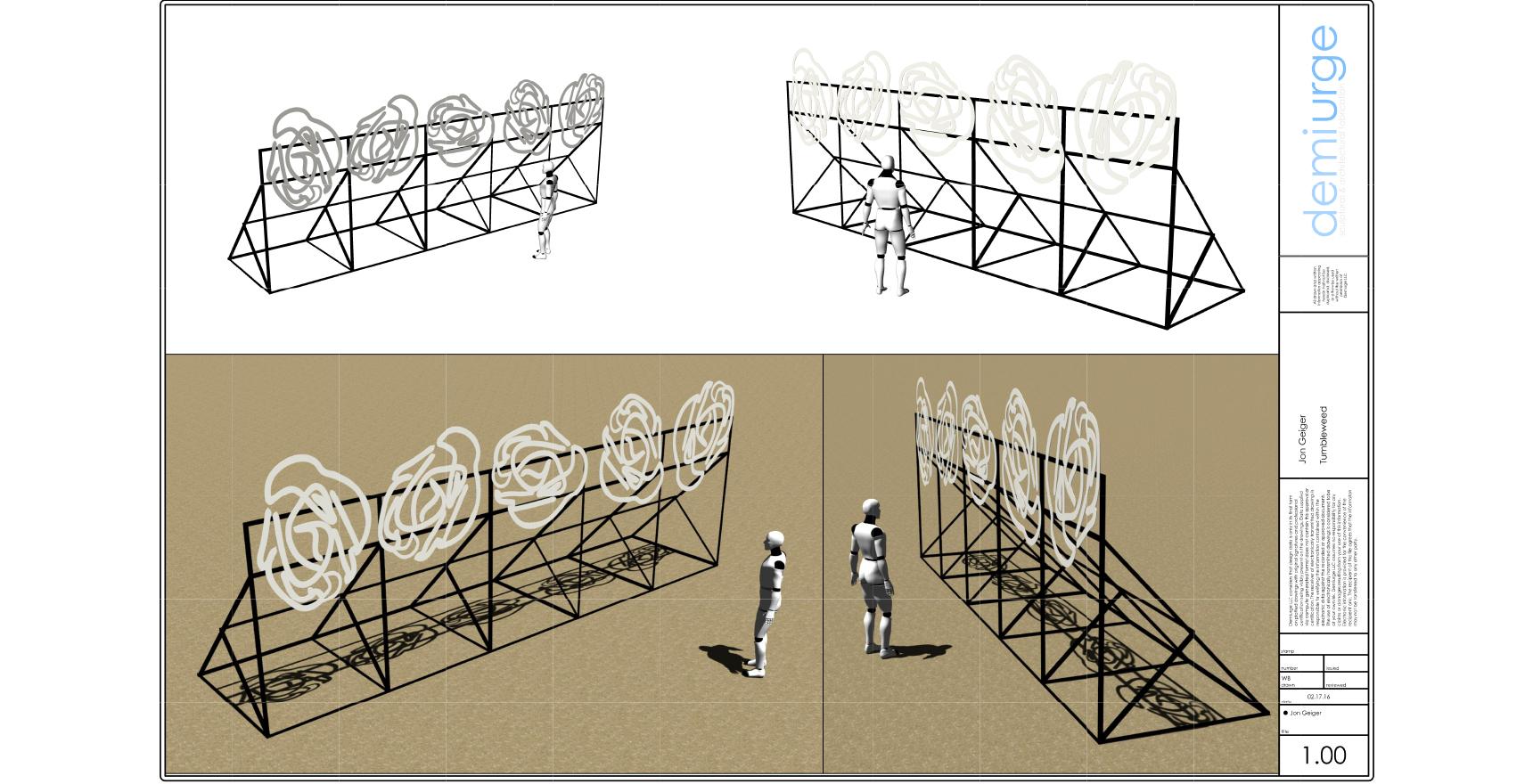 Gieger’s layout for ROAM – All Images Courtesy of RMCAD

303 Magazine:  Tell us a bit about yourself and your history in the art world.

Geiger: Certainly, I’m from Alamosa, Colorado but have been currently residing in the Detroit area for over four years now. I received my BFA from the University of Colorado in Boulder in 2010 and then spent a few years living and having a studio in Denver. I left the wonderful city to attend graduate school at the Cranbrook Academy of Art where I received my MFA in ceramics in the spring of 2014. Graduate school was quickly followed by my first solo show with Good Weather (North Little Rock, Arkansas) in the summer and then a second solo show in Chicago at Three Walls. My work has now begun to enter both private and museum collections and I’ve continued to maintain a steady list of exhibitions – my last ones being with Denver’s great Gildar Gallery for the group show No Empty Vessel and with a two person show title MASS at Fernwey in Chicago.

303: What type of art do you produce and why did you start creating art?

Geiger: I work in a variety of mediums and methods but I would put myself under the umbrella of contemporary ceramics. Aside from the massive neon ROAM piece, my work often tends to be on the smaller scale. For the past several years I have had a keen interest in making work that reflects my relationship with the western landscape and the frontier spirit – often playing with the aesthetic relation between perception and representation. I have maintained an ongoing series of small ceramic sculptures and flat ceramic works that are often intuitively made while I’m in the studio. These are then later combined and bricolage with cut out images, postcards, or magazines/books to create what I often refer to as place holders or markers for my relationship with the image and perceived landscape.

I can never really pin down when I started creating art, that timeline is always hard for me to define. I’d say that it wasn’t till the end of my undergraduate experience that I fully begun to grasp what it is to have a studio practice. My time at CU certainly molded and paved my pathway to making art and maintain a studio practice.

“I have a deep and personal connection to Denver’s art scene. This city was home to my first studio outside of the Academia world and one that really shaped how I approach my practice today. I honestly do not know where I’d be if I had spent my time elsewhere.” 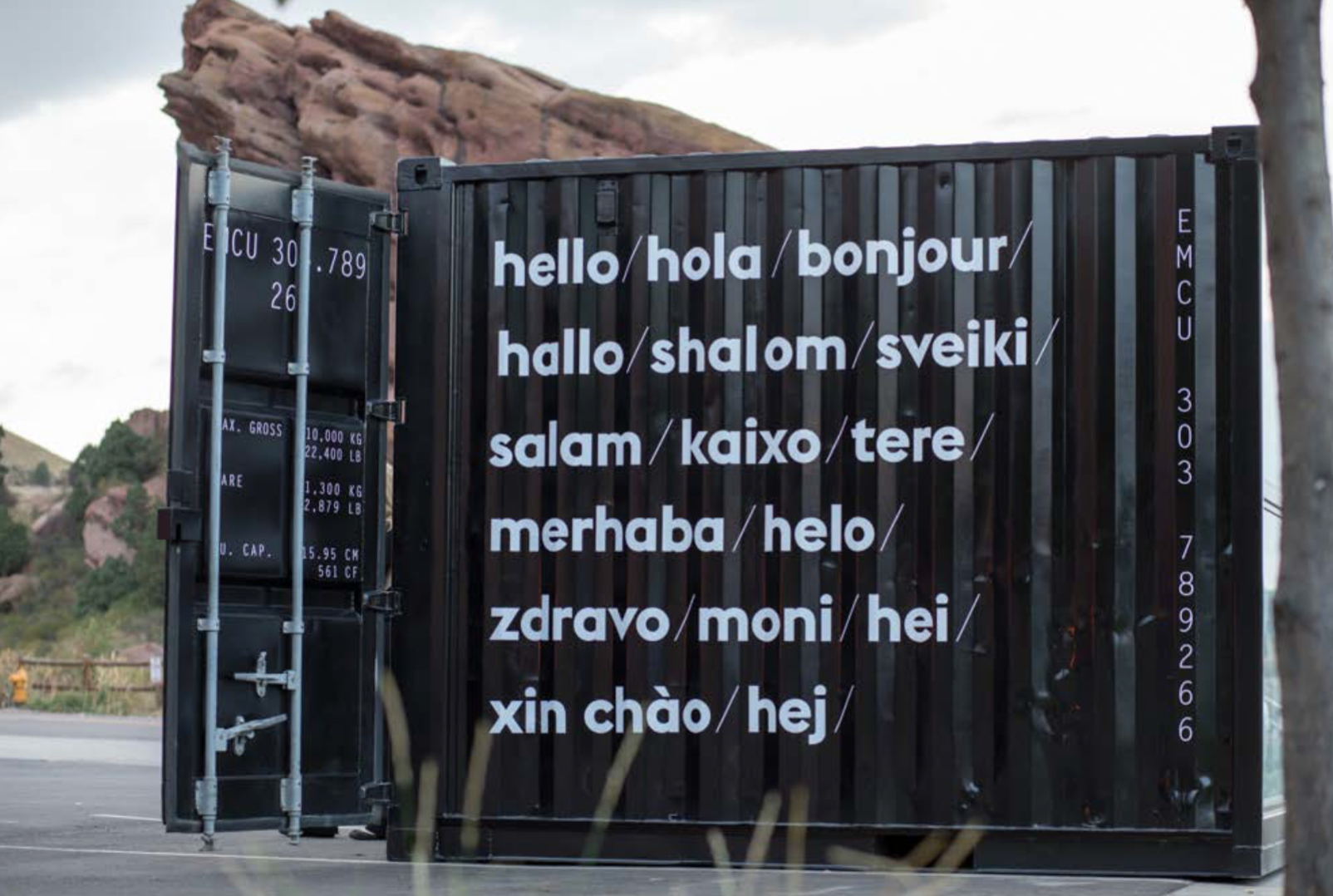 The Black Cube Museum, as displayed when traveling.

303: Tell us a bit about ROAM and what inspired you for this piece.

Geiger: ROAM is physically the largest piece I have taken on and is a 26 ft wide neon billboard like sculpture that displays an animation of an abstracted tumbleweed endlessly rolling along. Neon is something I’ve always wanted to play around with, it is a material that is still in heavy existence here in Detroit. But it is also a material that has this wonderful history and dual legacy for being once a representation of lush and lavish advertisement to that of being a standard sad country song lyric and symbol of seedy dive bars. It, like the tumbleweed is a wonderful stand in for all the different elements that are incorporated into the vast mountains, plateaus, and deserts of the West.

303: What exactly is the Black Cube and what do they stand for? How did they go about approaching you to make this piece?

Geiger: Black Cube is a nomadic contemporary art museum that commissions artworks by its Artist Fellows, of which I am one.  It has a unique take on exhibition spaces in that it has no permanent exhibition space. The white walls of a typical gallery give the artist freedom within the space – they are able to fully take it over and make their work a center point. While Black Cube challenges that notion and in turn the artist. It is an exhibition model that really pushes an artist’s process and forces them to work with their given surroundings. This can give so much more gut and girth to a piece and reach out to audience members in a whole new light.

Personally, I’ve been working with Cortney Stell and Black Cube for a year and half now. Cortney contacted me for an initial studio visit and from that point we hash out ideas of what the work can be and where it can go. As I said before the difference with a regular space and Black Cube is site and more so the mobility of site. So with that time is a big thing. We spent probably over six months in the beginning adapting and tweaking my initial ideas  into what then became ROAM and then probably as much time finding locations, getting permits and all that fun stuff.

303: How would you compare the Denver art scene compared to everywhere else around the world?

Geiger: It surely a unique place and one that was hard for me to leave. Denver’s art scene is strong and super community driven. The formation of TANK studios and Redline are great examples of the level of work being made there and perhaps more importantly the support that is shared amongst all the artists in that city.

303: What do you hope to inspire through the ROAM piece?

Geiger: I hope to create a moment of pause for people who pass by – to catch them like a mosquito to a bug zapper and leave them with something they normally wouldn’t come to interact with. 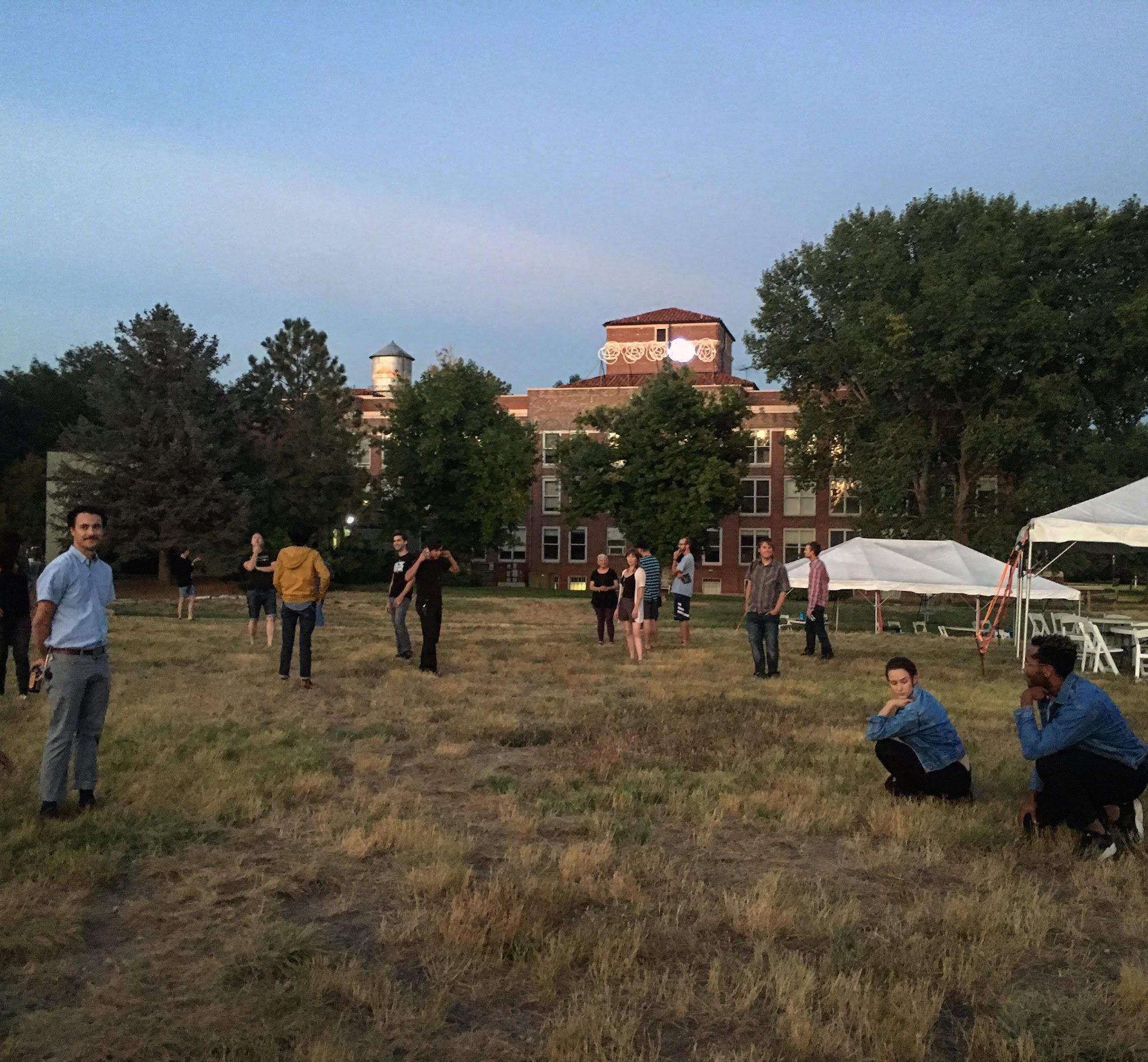 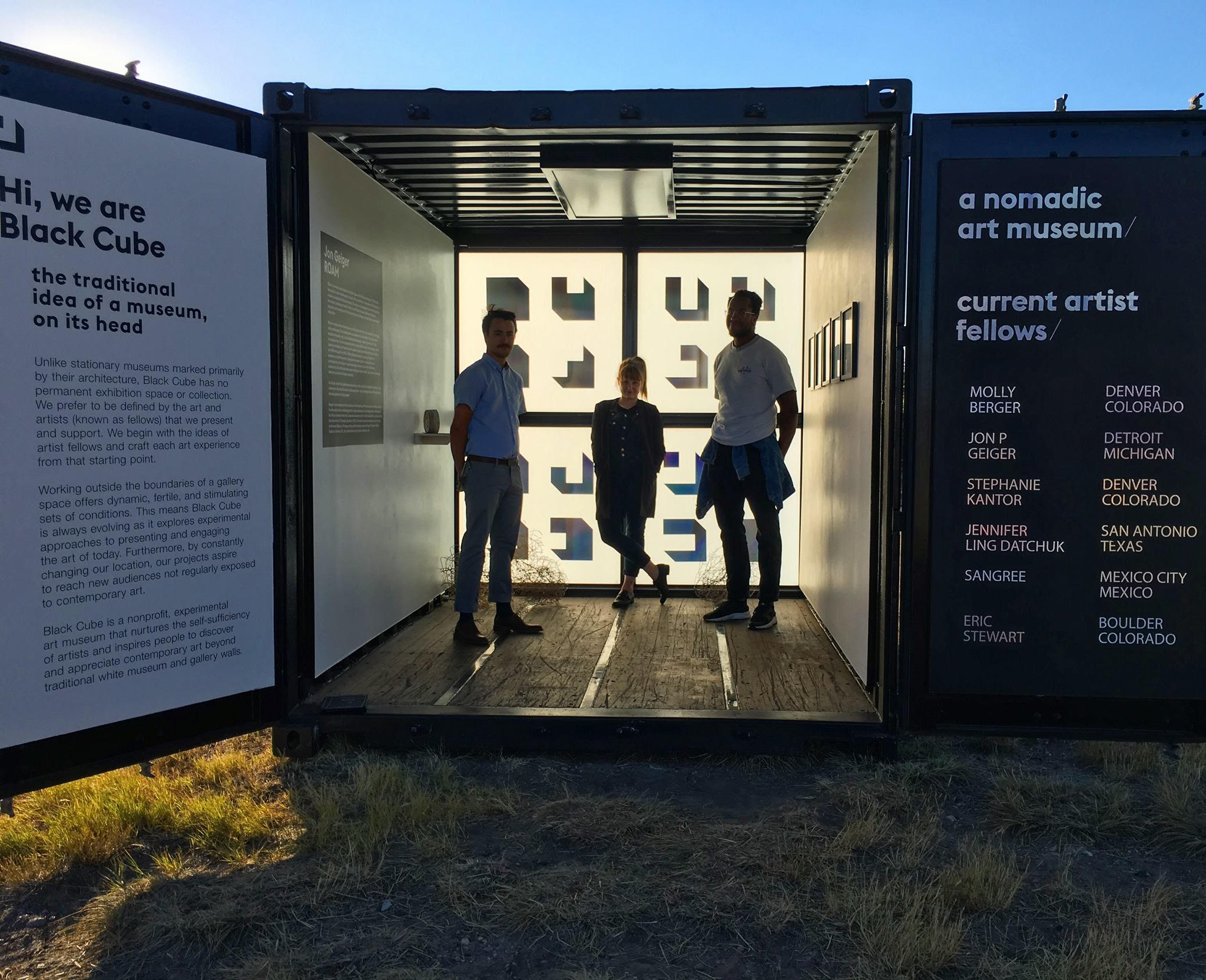 The interior of a Black Cube Museum pod where visitors gain info about the current project.