As the saying goes, “if you want the weather in Colorado to change, wait five minutes,” and Thursday night at Red Rocks was no different. Storms passing throughout the day were teased by random bursts of sunshine, but overall the day was damp and cold. Fans of the legendary jam bands Gov’t Mule and Moe. knew they would need to groove through the night to stay warm while they attended the double headliner show at the iconic venue. 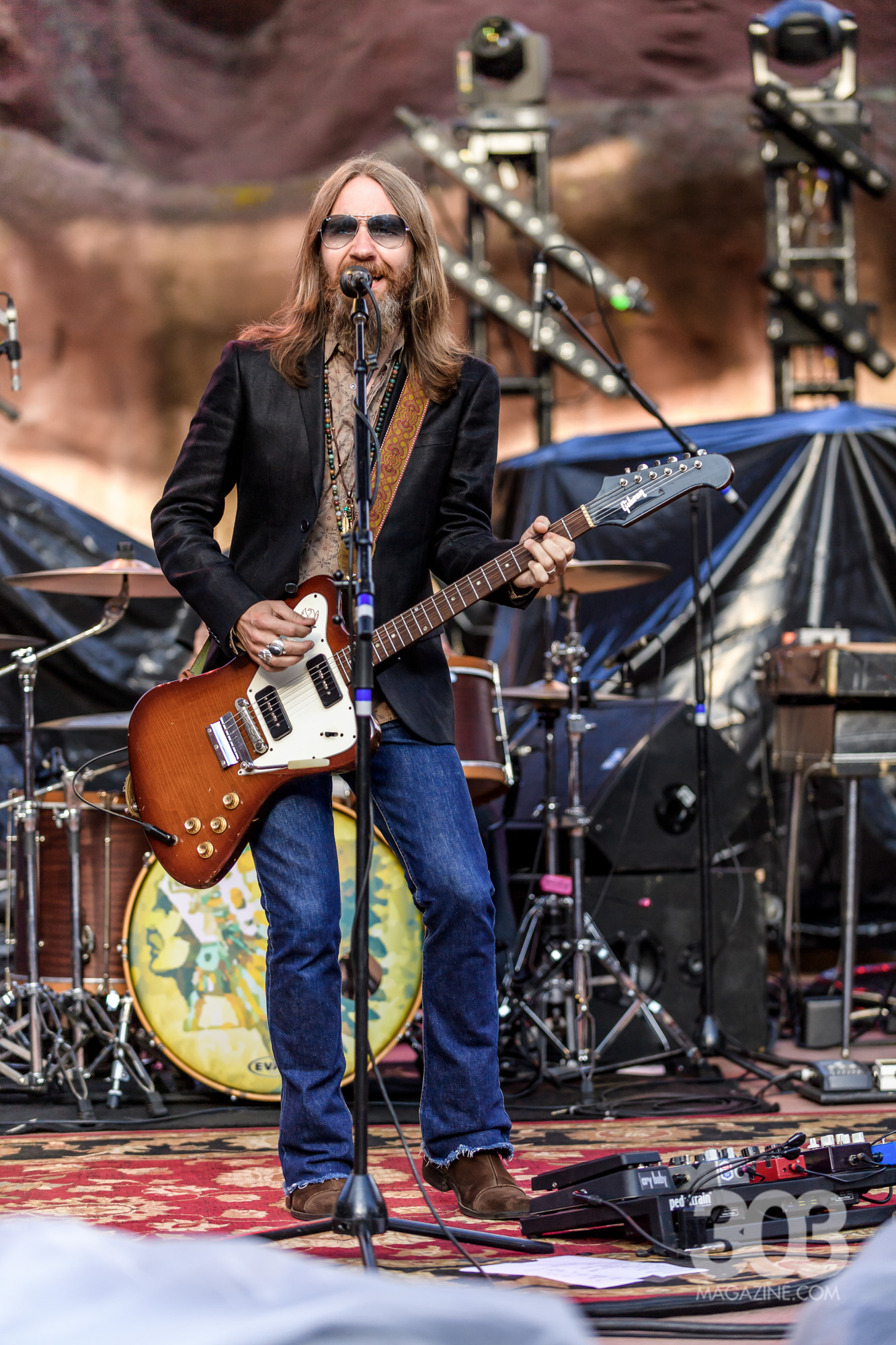 Blackberry Smoke was the first act to step up and opened up the evening for the stacked headliner show. This Southern band could be your next favorite. Fans from all over were decorated in fancy merchandise, from small patches to fully embossed leather jackets. Their hard, Southern rock has made quite an imprint on the Rock circuit lately, having been the supporting act for Gov’t Mule all summer. 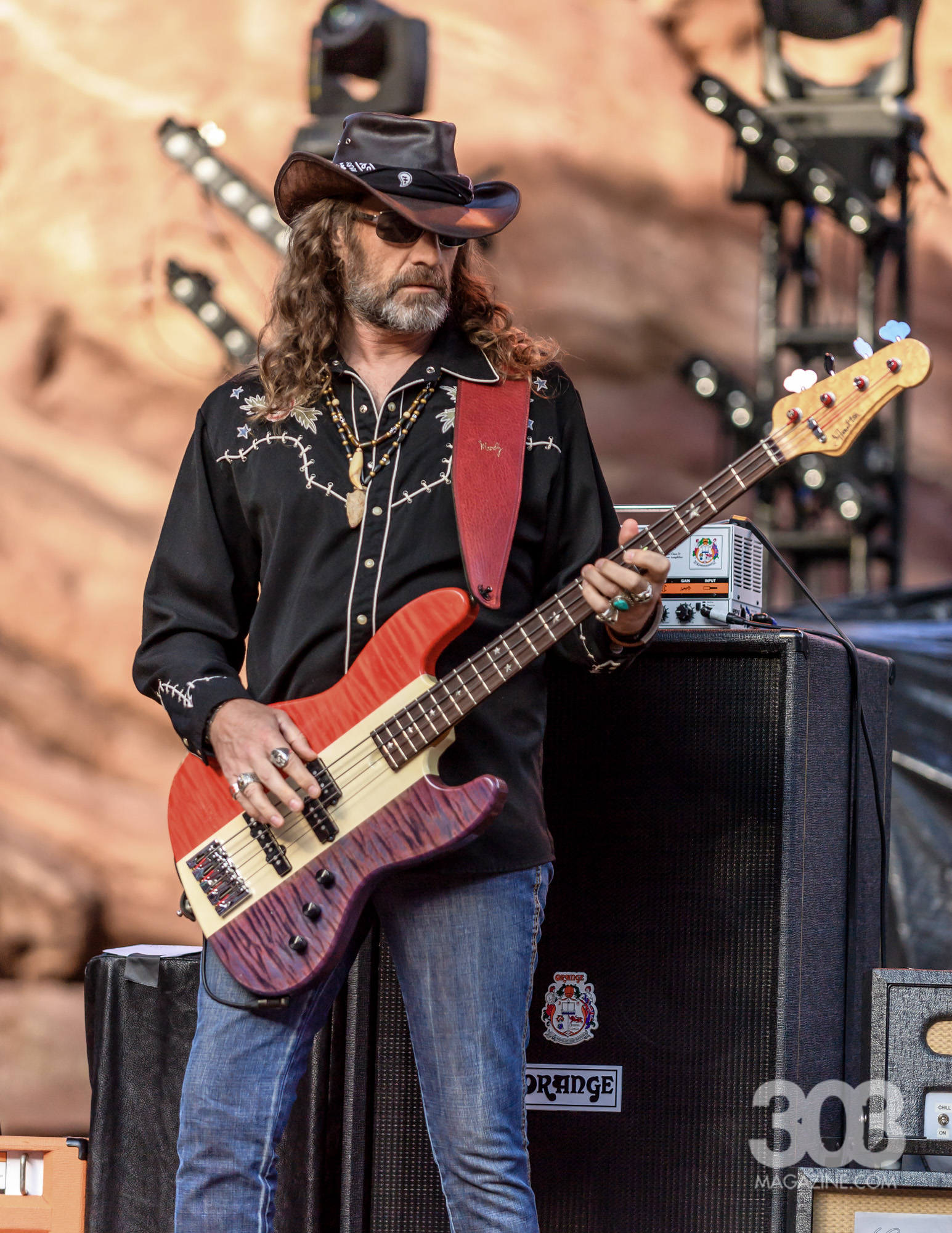 At 7 p.m. sharp, Moe. paraded onto the stage and the boys were greeted by ear rattling screams. “Rebubula” and “Lazarus” were the first two songs of the evening, setting a jam vibe for the rest of the set. Guitarist Al Schnier rocked “Annihilation Blues” with his double necked-guitar. Fans varying in ages from teens to seniors could be seen dancing freely in the front row of VIP while the extensive light show of bouncing swirls leaped around on the rocks. “Haze,” an appropriate “Rainshine” and “Captain America” carried the crowd through the windy evening, decorated by a bodacious solo by Al Schnier, in which he embarked to the very edge of the stage, just a hair above the photo pit. 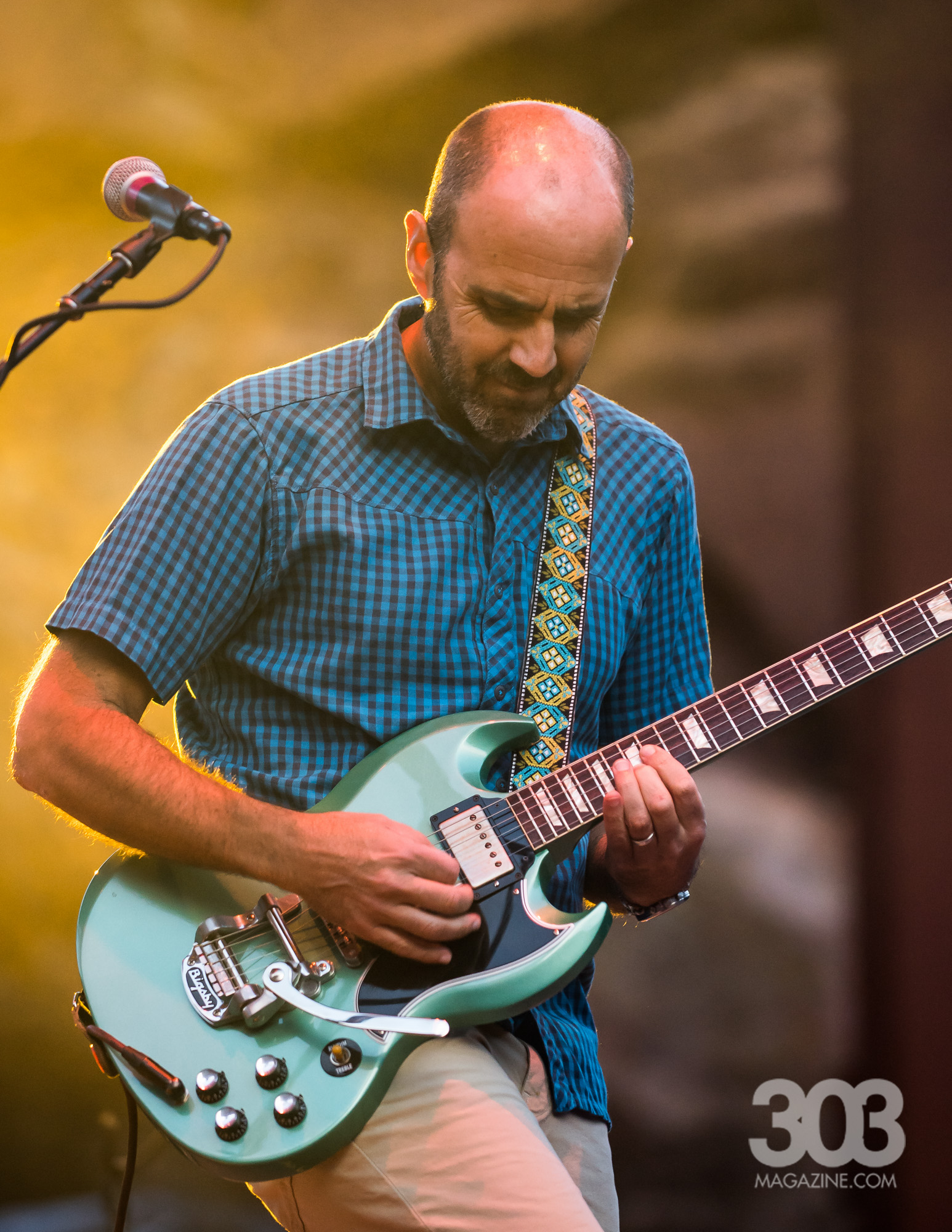 The lyrics “well she knows nothing at all about life / now she knows everything about living” sang out from the song “Moth” into the chilly air, the sun had set a while ago and the temperature was growing increasingly low as more wind picked up. Although a nice break from the suffering heat we have been experiencing, the bodies began to bundle up – in what was mostly gear labeled in any of the three bands performing. 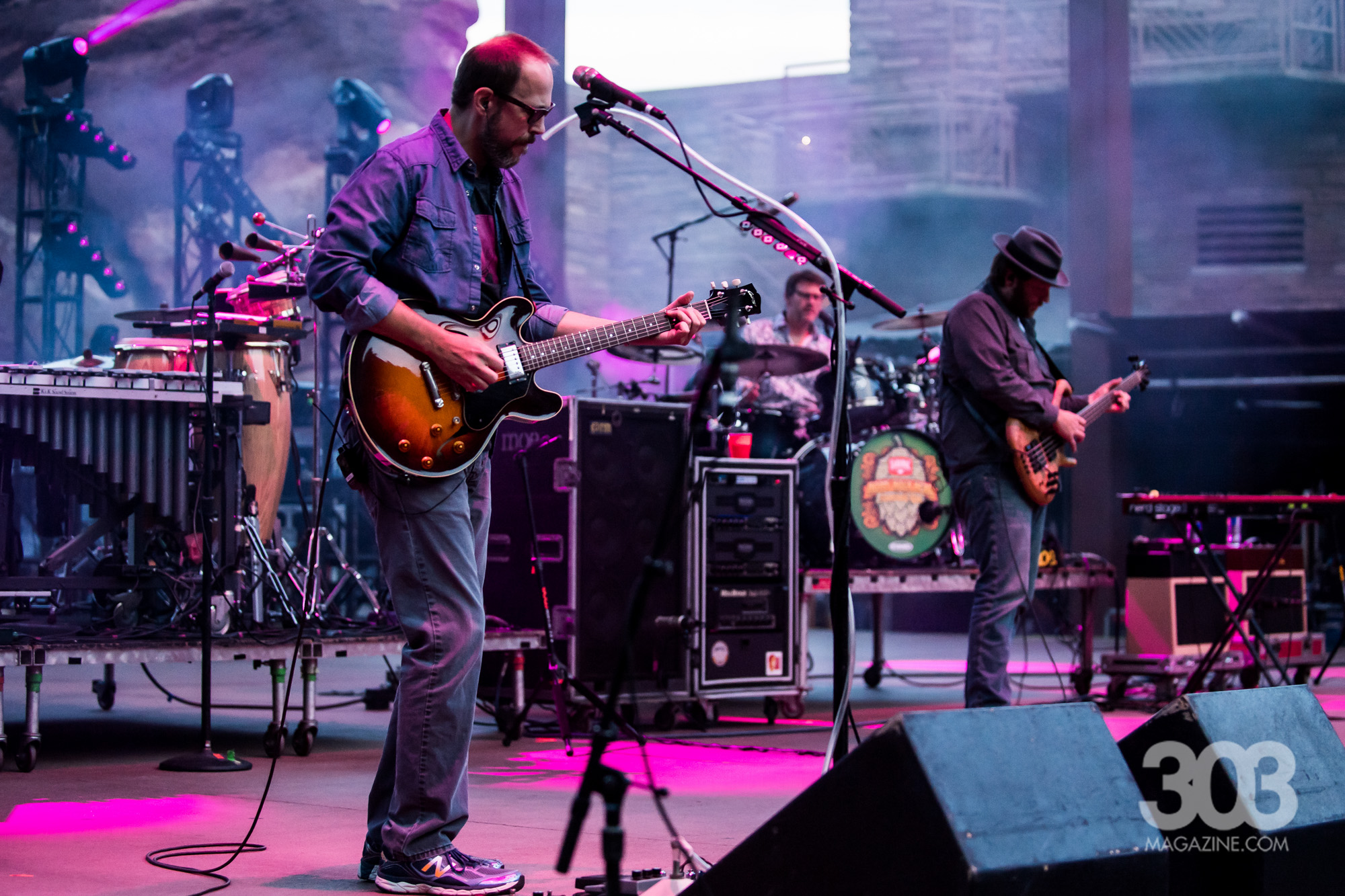 “Hi & Lo” and “Brent Black” were lengthy tunes that brought the band to a cover of none other than Gov’t Mule’s, “Thorazine Shuffle,” which garnered whispers in the crowd inquiry the possibility of a collaboration. A collaboration that did not happen, however, hope of such an event was not lost. “Billy Goat” rounded out the festive performance before concert goers took a needed beer and bathroom run.

Just before the shrillness of the weather could overtake the comfort of everyone still braving the show, Gov’t Mule entered the scene to rip off “Railroad Boy” and then “Mule.” “Mule” really brought life to the party with teases from “Jungle Boogie” and “Getaway.” A clever cover of “Soulshine” by the Allman Brothers Band came up next, inspiring fans of the classic band, previously featuring the lead singer Warren Haynes. It wasn’t the only Allman Brothers cover, as “Kind of Bird” made an appearance two songs later, after “Banks of the Deep End” and “Larger Than Life.” 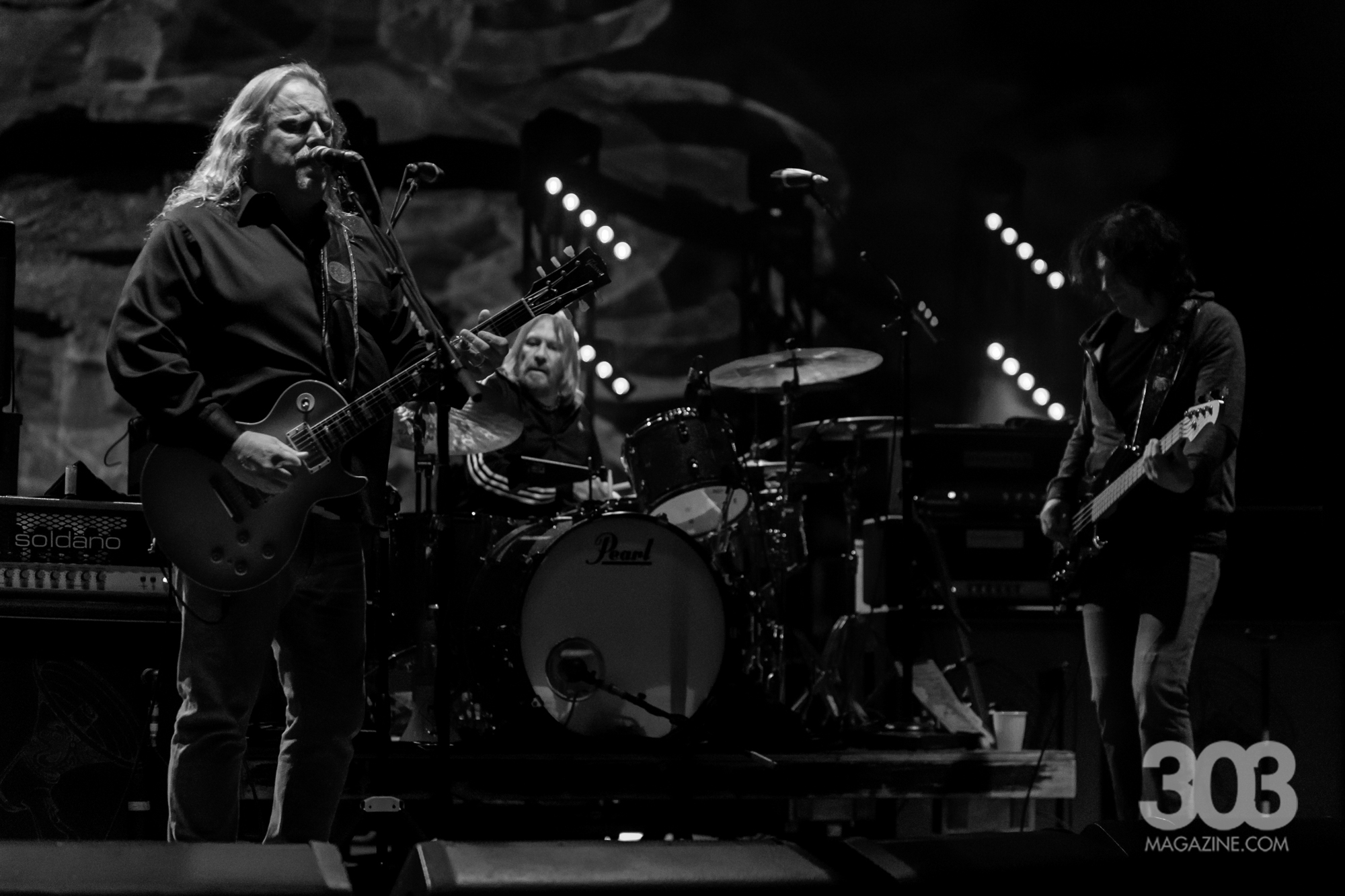 The “And Your Bird Can Sing” cover of the Beatles jumped in among the other epic odes to several other classic jams, before “Captured” brought things back to the OG tunes. Just as Moe. had performed a tribute track to them, Mule did “Opium” in similar fashion, just to dive into two other covers “One of These Days” and “Fearless” by Pink Floyd jammed out next and “Blind Man in the Dark” topped off the interesting set. 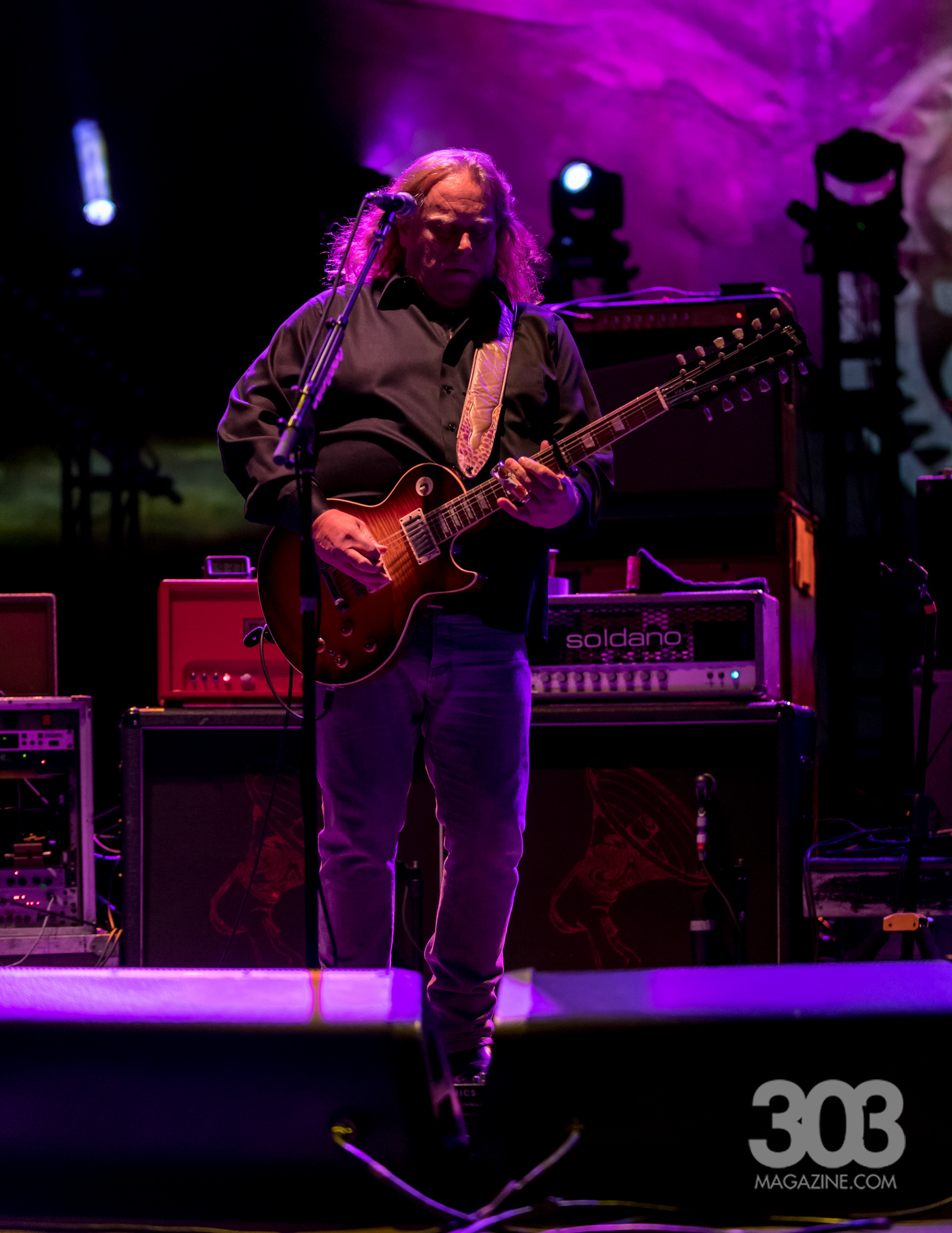 The inevitable encore did not take long to get started and fulfilled the previous hope of the bands performing together – Moe. joined Mule and the two bands covered Dylan’s “I Shall Be Released” and then the show had to come to an end. With no doubt, these two will be back come next Red Rocks season, but we pity the fool who missed a dual lineup like this one.