Review – Denver Pays to get Trampled By Turtles 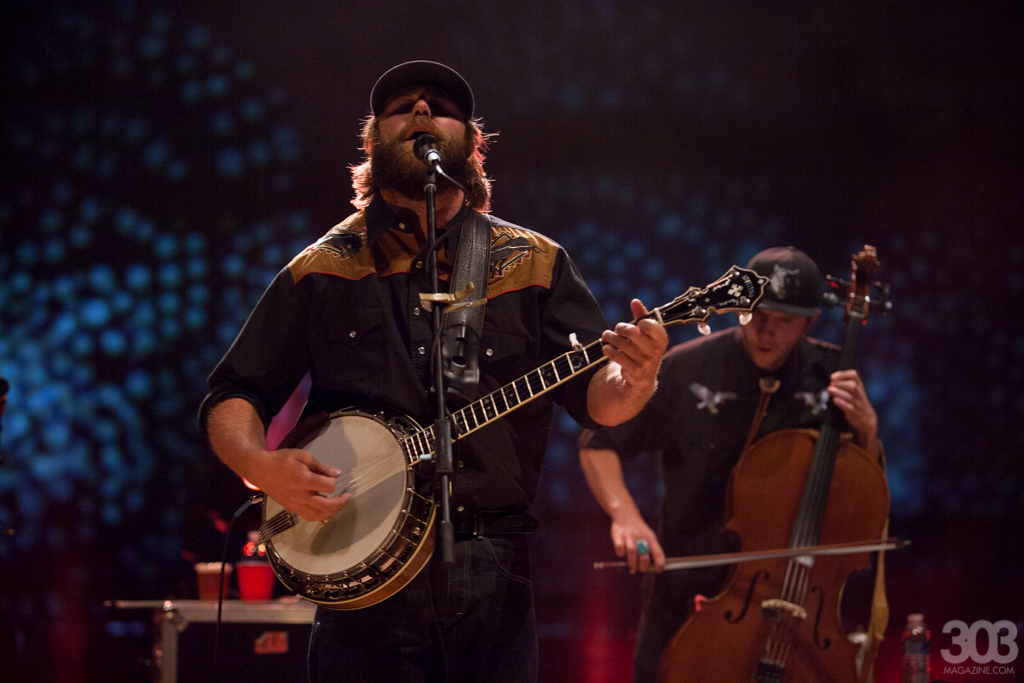 That August air is settling in, when the weather is hot, the colors are vibrant and Trampled By Turtles makes their way back to Colorado to sell out some shows. The Minnesota boys played two nights this year, kicking off the festivities with an intimate evening at the Ogden Theater Wednesday night with Dead Horses and Horseshoes & Hand Grenades. Thursday offered a more spectacular view, with lightning to their backs at Red Rocks and supporting act Lord Huron. Needless to say, the two performances offer much to discuss, so let’s dive right in. 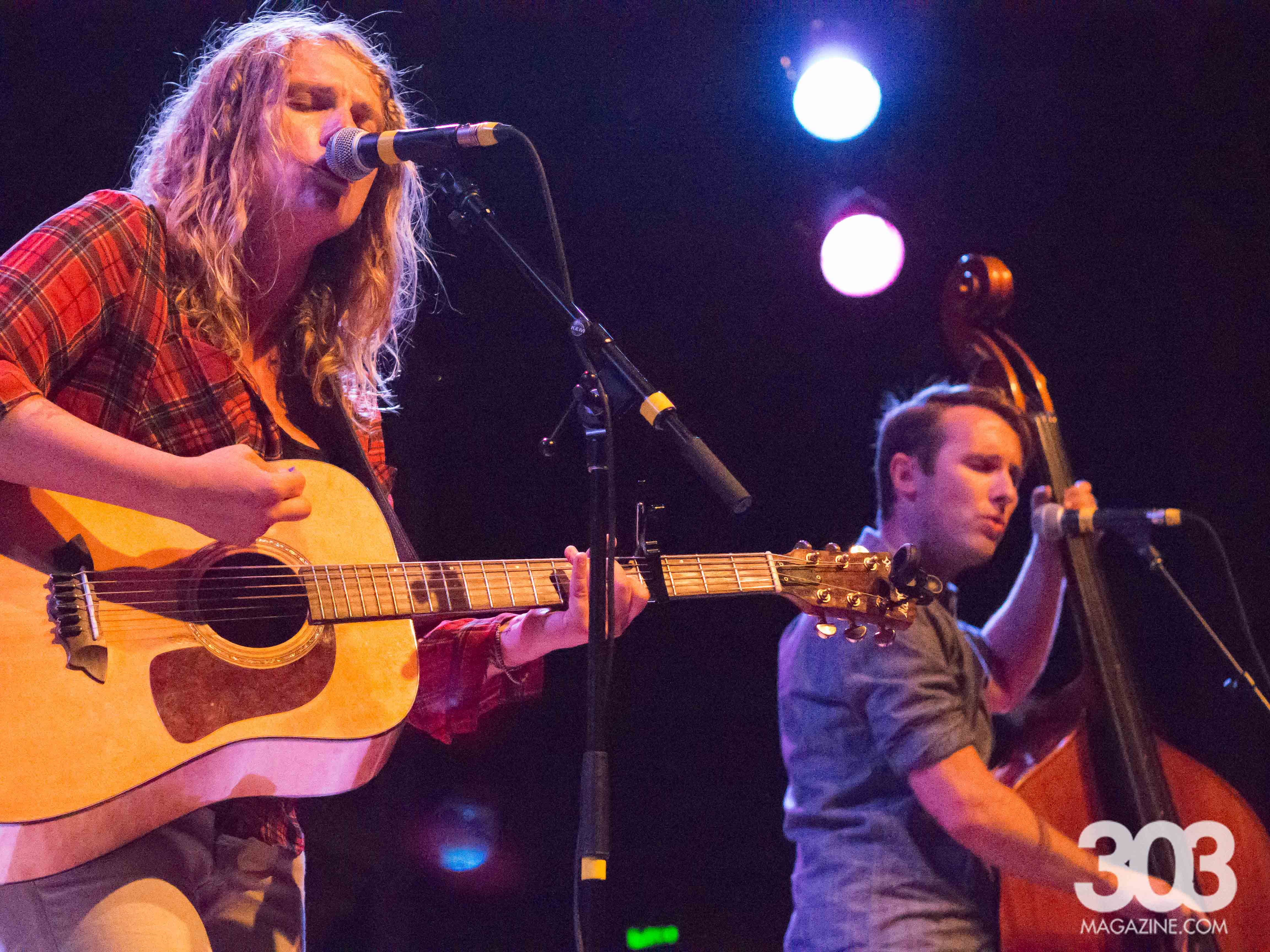 Approaching The Ogden on Wednesday night, the outside appeared the same, but immediately upon entering the venue, a large, new accessory to the doorway is added. Two huge metal detectors manned the entrance and, although it did not seem to slow the process down, the consumers were clearly confused.
Dead Horses gave an incredibly energetic performance, with singer and guitarist Sarah Vos stealing the spotlight early on. The trio from Wisconsin has toured relentlessly over the past couple of years, sharing the stage with some of finest artists from the folk and bluegrass genres.
About a half hour after Dead Horses laid out their set, Horseshoes & Hand Grenades made their way to their positions circling a single microphone. The banjo, guitar, fiddle, bass and harmonica players formed in a traditional crescent fashion while interchanging positions in front of the microphone to amplify their instrument or voice. 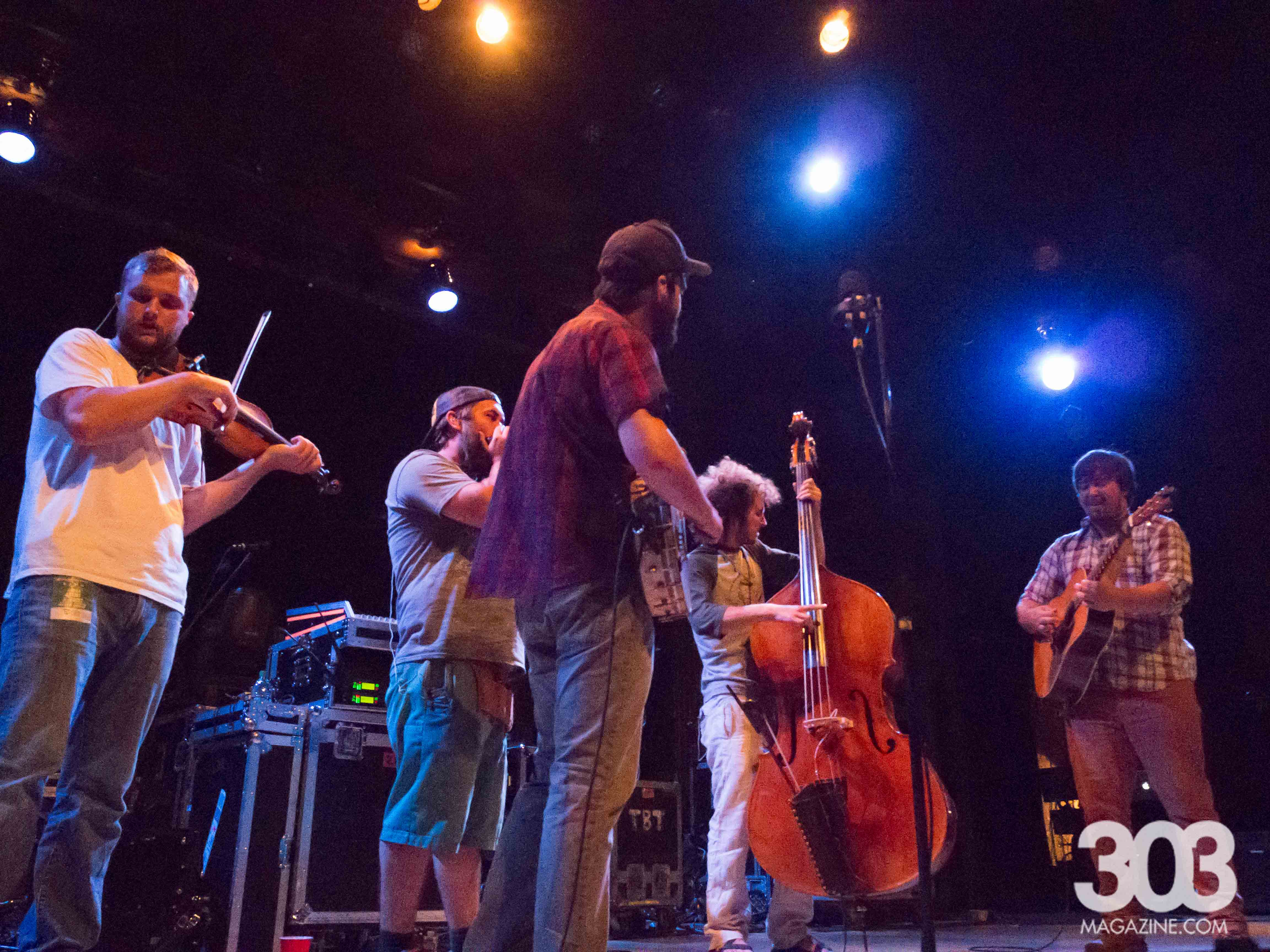 David Lynch, decorated in a full harmonica belt, wailed away to favorite tracks by the Wisconsin ensemble. Sam Odin on the bass shook his crazy mop of hair while jiving away on the stand up bass as guitarist Adam Greuel announced to the crowd that this was the fourth time they are performing in Colorado this summer, the last of which was just two weeks ago. “We got ourselves a hootenanny!” he yelled out over the crowd as they continued filing into the venue.
The boys each grabbed a red Solo cup and performed an excellent a cappella rendition of “The Rattlin’ Bog.” After which, the group covered “Rhiannon” by Fleetwood Mac, threw their setlist into the grabbing fists of the crowd and called it a night at 9:30 p.m. 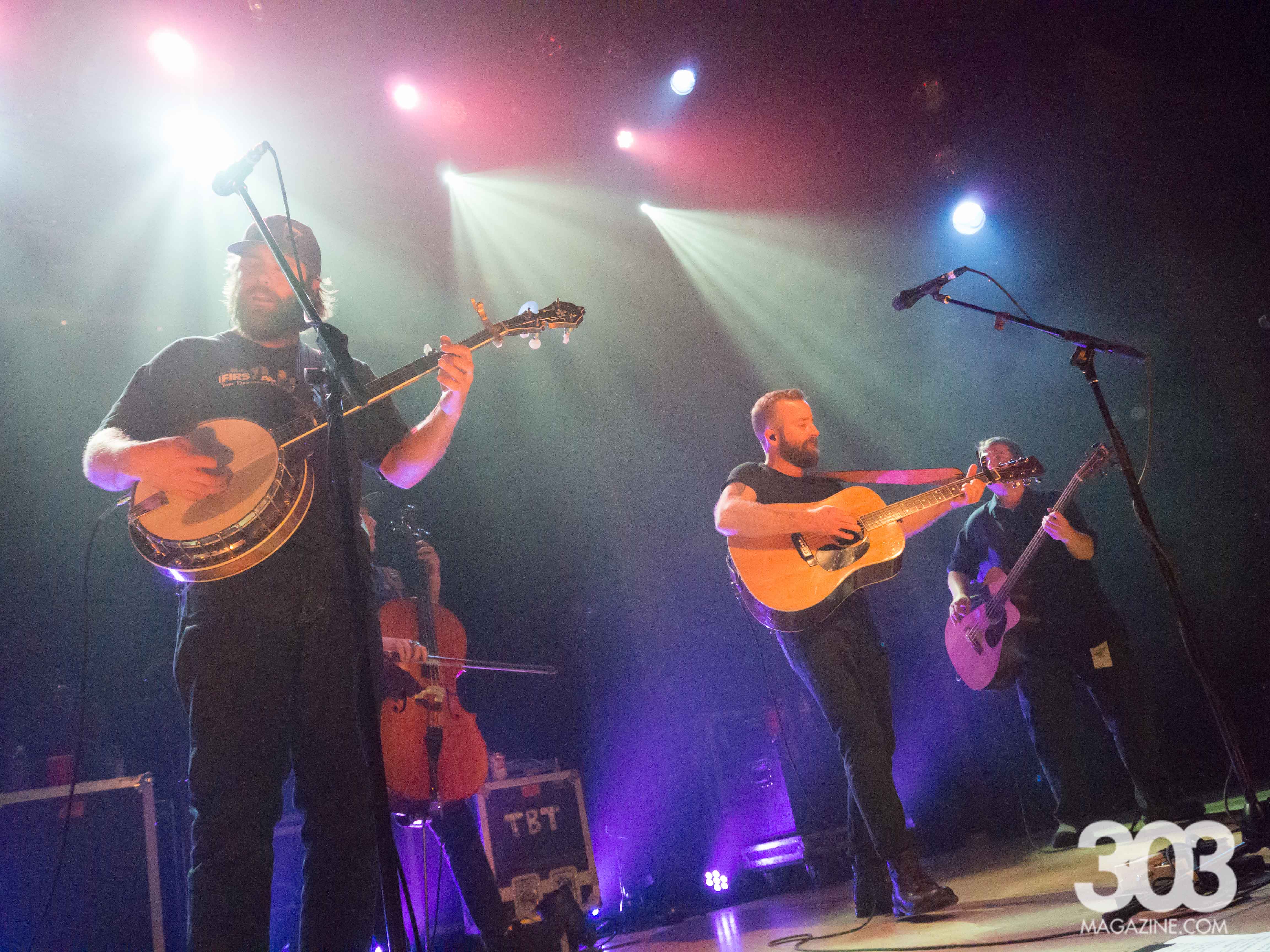 As soon as the signature five instruments lined the stage on their stands, the masters of their sound retrieved them to being the headlining show. Beginning the night with a build up banger, “Alone” was the first track to begin the two-show event. Playing “Darkness and the Light,” “Empire,” “Burn For Free” and “Whiskey,” the band proved that the group was here to play songs old and new. The ever popular “Wait So Long” had the crowd stomping their feet almost louder than the music could be heard, a staple occurrence to any good Bluegrass show. “Walt Whitman” and “Keys to Paradise” were belted out just before a friend from the audience gifted the gentlemen with a round of shots. 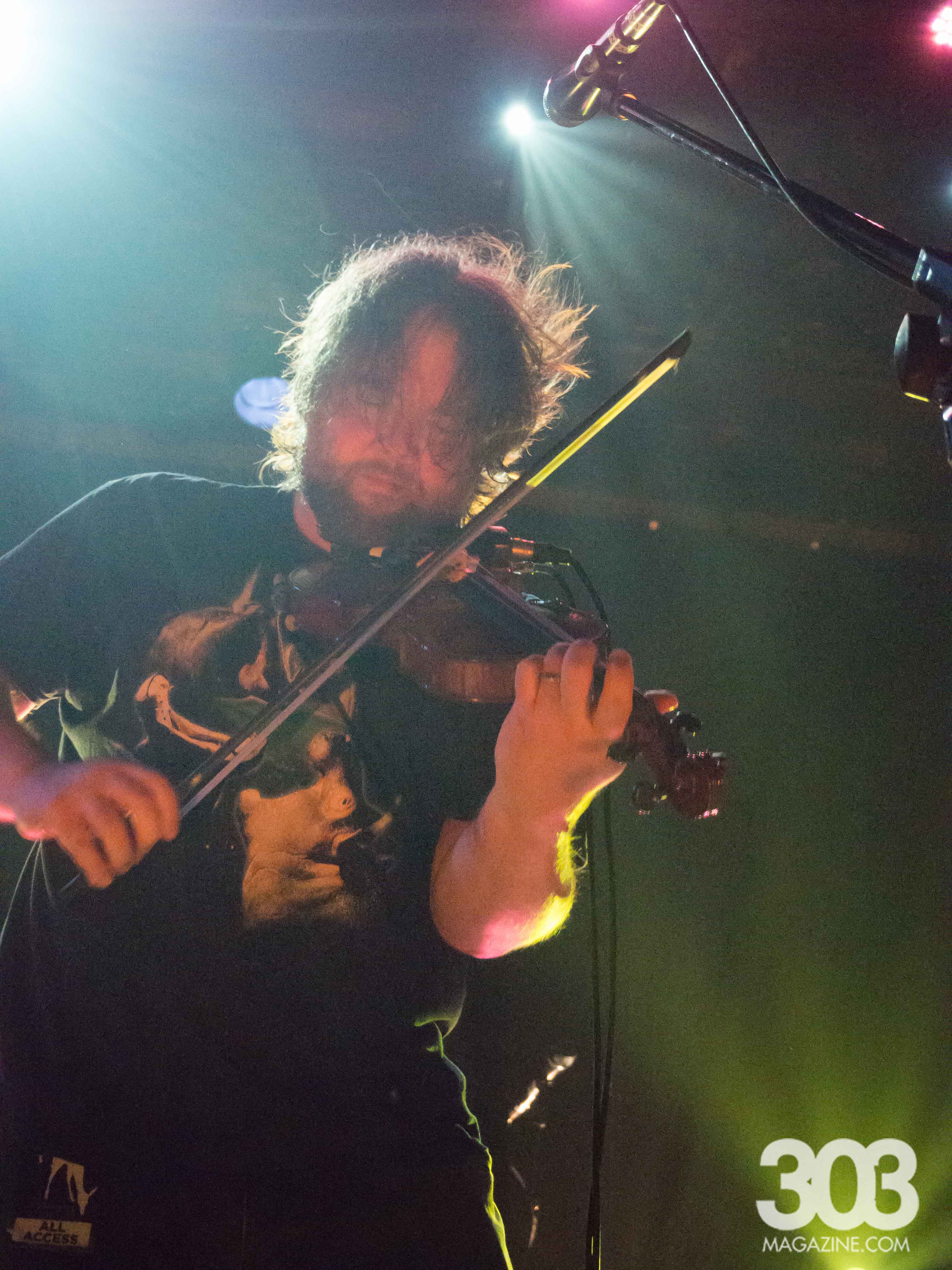 ‘We’re really excited about tomorrow, but there’s something about coming to the Ogden and playing right to you,” lead singer Dave Simonett mentioned regarding the size of the special theater. “Codeine” got banjo player Dave Caroll tapping his foot to the fast-paced tune, “Victory” brought friends arm in arm, bassist Tim Saxhuag manned an amazing cover of Loudan Wainwright’s “Swimming Song” and “Bloodshot Eyes” to round out the show in the heavy, beautiful way that only that harmonica solo can. After a short break, the band came back for two more tracks before retreating for good. 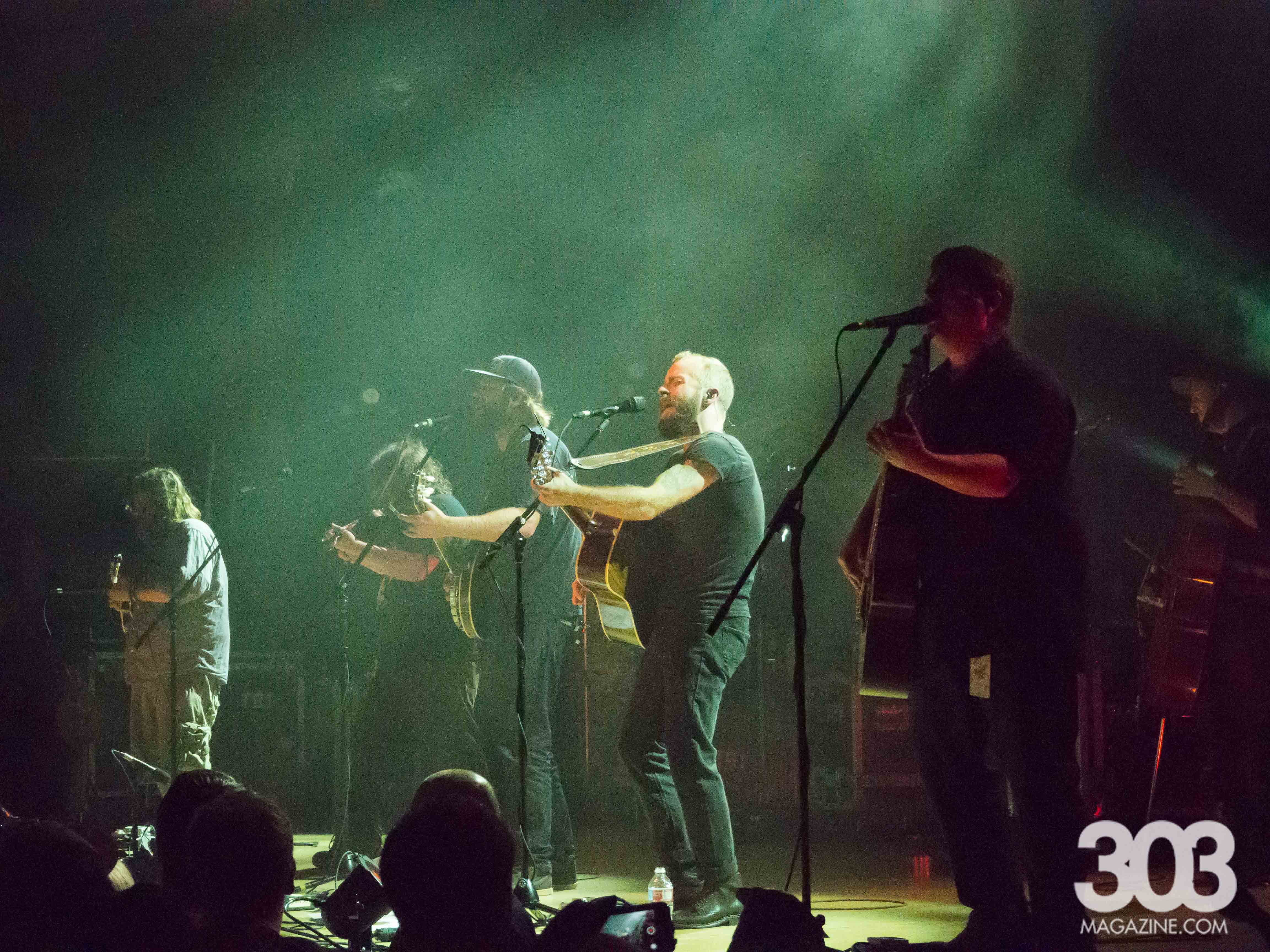 Thursday night could have used the cover of the Ogden theater due to some light drizzling; however, the majestic sky created by the weather was not to be missed. The sprinkling trickled down mostly during opening act Lord Huron’s set, although that did not keep the thousands of Red Rocks seats from filling up to the very top of the amphitheater. The Los Angles-based folk quartet, who came out with their second, very well received album “Strange Trails” in mid-2015, dazzled the rocks with their wholesome, hearty lyrics and melodic progression. The words to their songs could be heard resounding from any area of the venue. 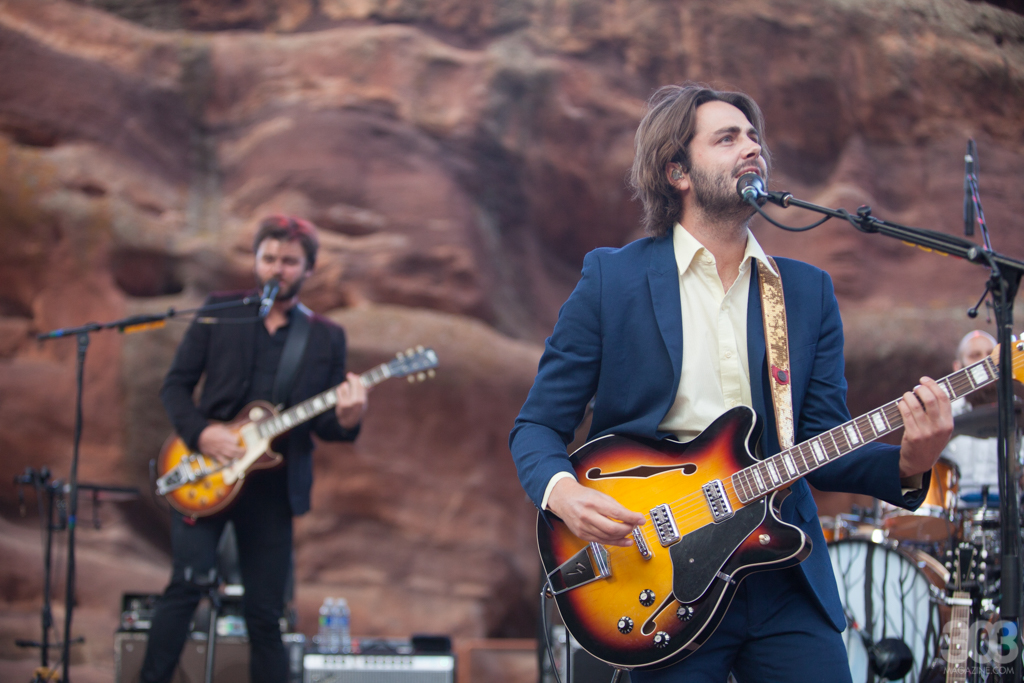 Beginning the second night of their two-night run a little earlier, the Duluth favorites jammed “Wait So Long” at 9 p.m. sharp. A light rain was starting up again, and the fiddle solo took flight right as a large crack of lightning lit up the city and hills behind the famous scene of the stage. 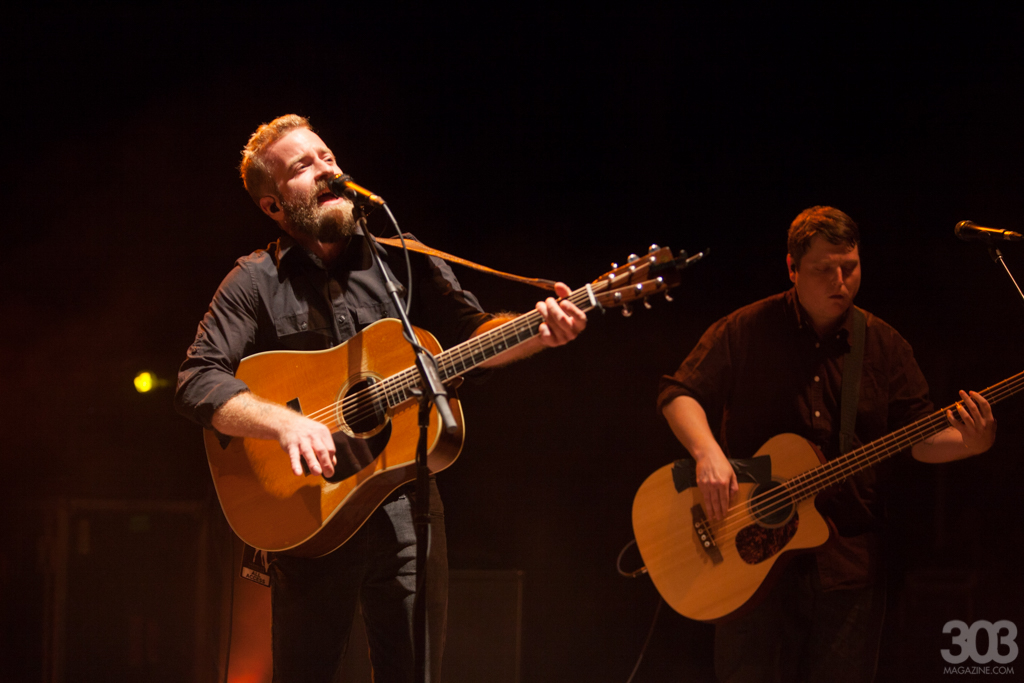 From there, the setlist lingered right in the middle of Trampled’s golden hits, covering a slew of songs from “Trouble,” “Palomino,” and “Duluth”, such as “Valley,” “Empire,” “New Orleans” and “Help You.” Wild Animals still made its appearance with “Are You Behind the Shining Star,” as with “Stars and Satellites'” “Widowers Heart” and “Walt Whitman.”
“Arming of Infants,” “Shenandoah” and “Victory” filled out much of the second half of the weeknight set, with “Alone” closing out the night like a palindrome reflecting the opening portion of the night before. However, the ending song did not come before Tim once again took the reigns into an amazing Sinead O’Connor cover of “Nothing Compares 2 U.” 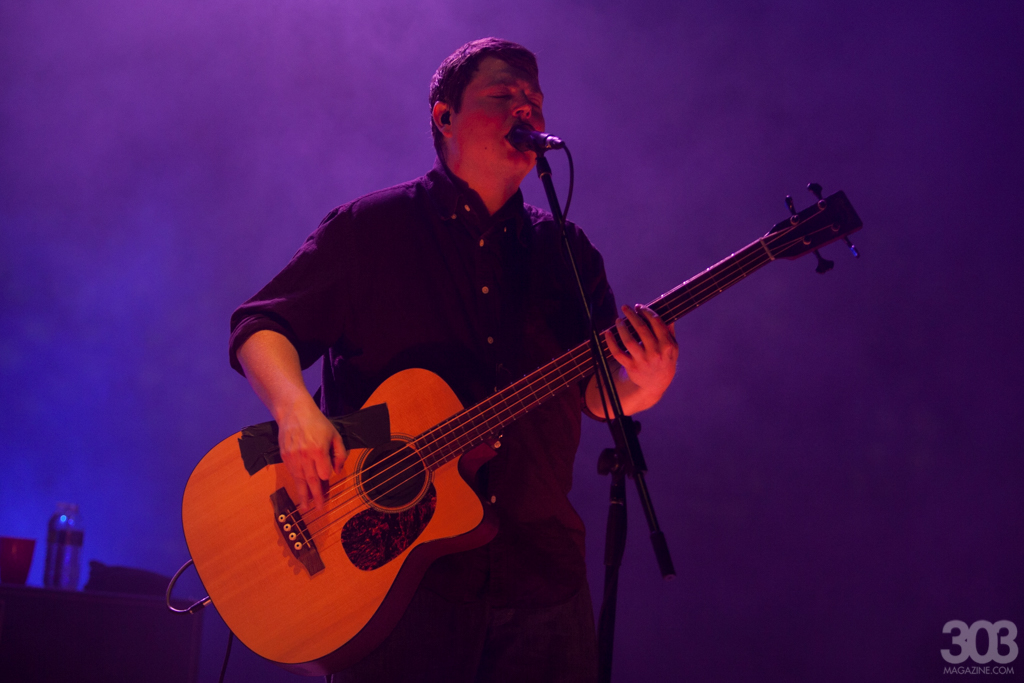 After another brief interlude to signal the upcoming encore to finish off the epic two-part Trampled experience, the group brought the heat covering “The Weight” by The Band. With a fiery rip of “It’s a War,” the fest of thrashing Bluegrass came to an end. As the house music blared, hordes of fans flocked to the parking lots, secretly wishing they could move to the Great White North to see these guys more than once a year. 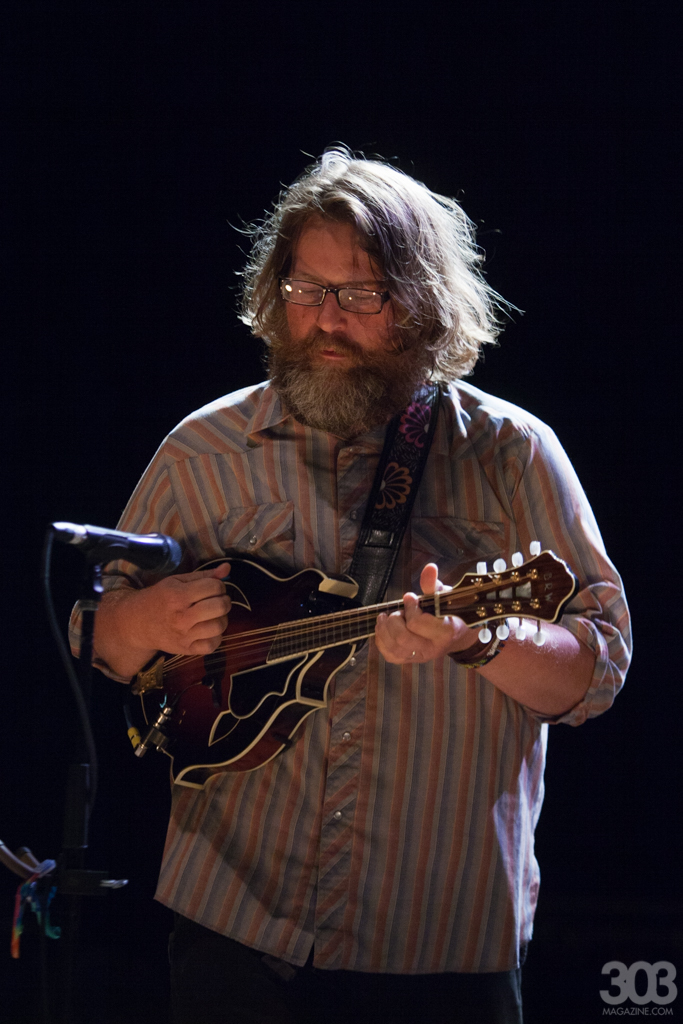